Like the other members of the Skrull Kill Krew she’s got a number of superhuman abilities that derives from her shape changing abilities. She can:

Her particular unique ability is the ability to change into a giant ugly alien insect form.

Like her teammate Ryder she’s developed the mental ability to speak via her mind (alias telepathy).

Somehow, she’s also got the particularly powerful ability to turn herself rock-hard and thus render her near immune to most physical attacks.

Additionally she’s skilled with her weaponized arms, has a driver’s license, and is a good dancer.

Heidi used to a swinger when she contracted the lethal brain eating alien virus from hamburgers made from Skrulls. She was recruited for the Skrull Kill Krew by Ryder and taught how to use her newfound abilities.

Since Heidi actually thought their idea about hunting Skrulls sounded cool she joined them on their quest. To this days she continues as a team member to hunt down Skrulls around the world.

Heidi is a hyperactive, young girl with a very strong attitude. She’s all about striving to be cool.

With her attitude she is a natural friend in her teammate Dice. Like most women she likes Ryder too, and surprisingly gladly takes his orders.

Her typical rebellious streak is attracted to Moonstomp’s brutality and thus she’s a team player with the entire team. The only non-perfect team relationship is with Catwalk who she uses to tease for her looks.

Heidi is very much into action which also is the reason she joined the team (plus the fact that she’s now dying from the virus) and more and more enjoys hunting down Skrulls.

Well, Skrulls aren’t a big part of the DC Universe and considering they are all that is important for Riot (nowadays that is) you can’t just trough her in as is.

Either change his enemies into Durlans (some sort of tie-in with the Invasion is needed here), white martians (although they are too powerful to easily kill) or also insert the Skrulls into your DCHRPG campaign. 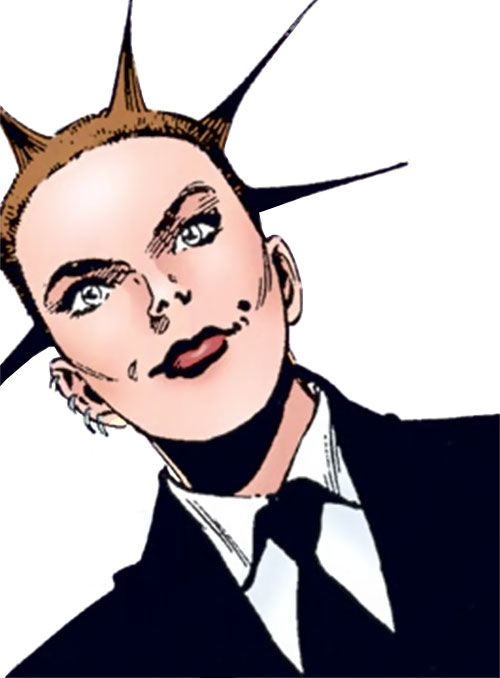