The Rising Sun Archer is a incredibly skilled bow(wo)man, and a highly skilled assassin, sniper, hand-to-hand combatant, acrobat, etc. She’s quite sharp, too.

Still, she was no match for Robin (Tim Drake) in close combat.

While armed with her longbow, the Archer pulled such feats as nocking and releasing a highly accurate volley of three arrows while in mid-leap across rooftops, or cutting through Robin’s de-cel line as he swung toward her.

She’s proud of her archery prowess, and put most of her Hero Points  into that and Perception checks to gain the upper tactical hand.

The Rising Sun Archer was a Japanese masked assassin during the World War II era. One of his descendants, a young woman named Lisa, decided in more recent years to become his successor. Through undisclosed means, she mastered the same skills as her grandfather’s.

At that point, the Penguin put an open contract on the head of Robin in Blüdhaven. This unusual move drew in numerous assassins, including the second Rising Sun Archer. But it also drew the attention of military intelligence. A US Army Special Forces team, using Robin as bait without his knowledge, starting taking down his would-be murderers one by one.

The Rising Sun Archer, a consummate professional, escaped their vigilance long enough to mount a vicious attempt on Robin’s life. It started with three arrows straight in Robin’s chest. The young vigilante only survived the onslaught thanks to body armour, and found it arduous to outmanoeuvre the redoubtable Japanese lass.

But she underestimated his resilience to pain. Drake exploited that by fooling her with a simple decoy in darkness. Yurigama though he had been bleeding too heavily to mount such resistance.

Robin overpowered the Archer, but let her escape after tagging her with a bug. He then tracked her down after she took new orders from the Penguin. He came to her apartment, but the Army team had taken her out while she was sleeping. They left her bound and gagged as a “gift” to Robin.

With Batman’s support, Robin managed to gain intelligence about the Penguin from the Archer. He let her go, but told her that if they met again he’d frame her so there would be an underworld contract on her head.

The Archer is proud and fierce. She’s also sharp with tactics, positioning and manoeuvring.

She does her best to be a stern traditionalist in the mould of her grandfather. As a consequence she’s huge on honour, being a good retainer and acting like a highly disciplined murder machine. Which makes her easily manipulated for a skilled enough social engineer, afraid to lose face, and not aware enough of high technology.

“You’re injured. I can smell your spilled blood. Let me end it quickly for you.”

“I’m the Rising Sun Archer. You deserve to know my name, because I intend to kill you.”

“I injured him in making my escape, but I’m certain it won’t prove mortal. As soon as I replace my bow, I’ll hunt him down again and finish him.”

Drawbacks:
SIA toward Honour and tradition. 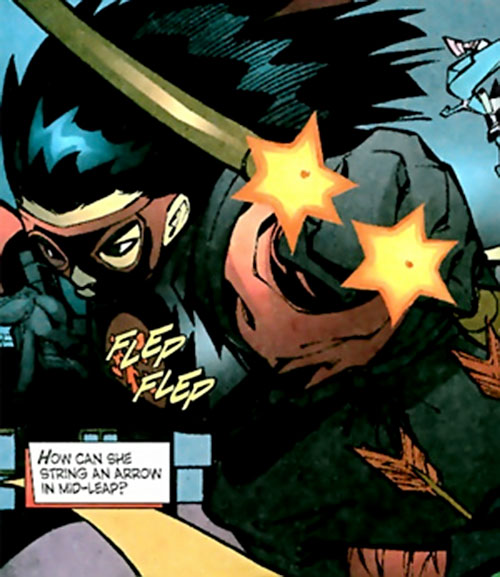