Carrie Kelley is Batman’s Robin in a specific future timeline. This future was chronicled in Frank Miller’s The Dark Knight Returns, a landmark and highly influential graphic novel published in 1986.

Like her predecessors, Robin is an impossibly talented teenager. By the time she pairs up with Batman, she can count on the following assets :

Caroline is also one unusually lucky lass, with a talent for narrowly avoiding dangers such as fatal falls (in DC Heroes RPG terms, the Luck Advantage). She also learns new skills extremely quickly.

As the stories unfold, young Ms. Kelley starts training with Batman. In particular she improves her acrobatics and accuracy with projectile weapons. She is also taught the basics of undercover work.

She further knows how to operate Bat-vehicles but this is done through voice commands rather than real controls.

Being minuscule, Carrie is not yet suited for offensive melee combat and has no training with such. Rather than a combat asset she works as a scout/infiltration/intelligence asset, driver/pilot and support.

Her only “weapon” is a slingshot, which is chiefly useful to distract people by plinking them in the forehead with a small rock. And even that will not work against people with good pain tolerance.

Carrie often operates the Bat-copter, a helicopter gunship that looks like a mishmash of Apache and Hind. It is heavily armoured and armed, has a full cloak, and is packed by sophisticated computers. The onboard AI can fully interpret Carrie’s vocal orders, and carry them out with pinpoint precision.

Caroline Kelley exists in an alternate future timeline  of the DC Universe. In this possible future, various issues bedevilling the USA of the 1980s have continued to run unchecked. This results in a mediocre, somewhat lawless, chaotic, decadent setting. 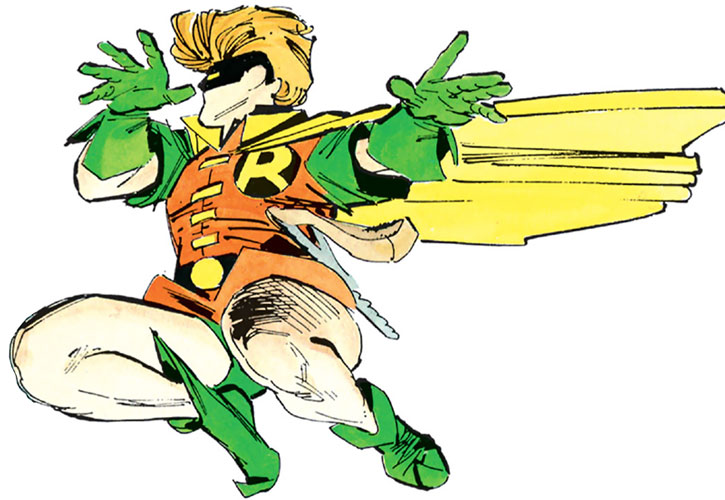 (This timeline was designated Earth-31 after the 52 events. Its fate during the later reality rewrites will not be covered here.)

In this future (year unspecified), Batman retired ten years ago. Gotham, as usual, is doing even worse than the rest of the country. Criminality is omnipresent, and the powerful street gang The Mutants controls many streets at night.

Keep calm and Carrie on

By this point, Caroline Kelley is a diminutive 13-year old student. She’s largely raising herself. Her parents, who apparently used to be activists, are now complete burnouts and stoners spending their days in front of the telly.

As they take a shortcut, she and her best friend Michelle are ambushed by three Mutants gangbangers. However, the middle-aged Batman has just resumed his clandestine activities and swoops in, mauling all assaillants. The two girls, being too young to know about Batman, describe him as “a huge man dressed as Dracula”.

Though he’s very near retirement, Commissioner Gordon then decides to resume working with Batman against tremendous political pressure. Fascinated by Batman, Carrie sees the Bat-Signal over Gotham one night. She decides to become the new Robin and find Batman.

After saving two weeks’ worth of lunch money, Ms. Kelley buys a Robin costume and starts experimenting with urban acrobatics. She nearly kills herself several times, but eventually develops genuine proficiency in gamboling over the rooftops. 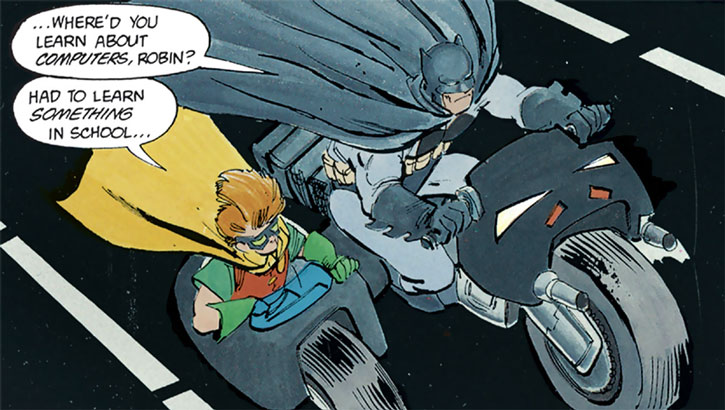 As “Robin” starts disrupting very minor street crimes (such as rigged three-card monte), she hears about a major meeting of The Mutants. Something this big could cause the Batman to show up. Carrie sneaks in to observe the meeting, and Batman does barge in, dispersing the heavily-armed gang.

However, Batman is overpowered by the nigh-inhuman leader of The Mutants. ”Robin” rushes in, which saves his life. The lass then evacuates him in the Batmobile as Alfred Pennyworth guides her over the radio.

Batman impulsively decides to take her into the Batcave, and make her the new Robin.

The centre can hold

Disguised as a Mutant and pretending to be a massively underage concubine of the leader, Robin spreads a false rumour about another major Mutants meet. This works, and the assembled bangers thus see Batman clearly defeat and maim their leader.

As a result, many Mutants splinter off. They form a chaotic militia called the Sons of Batman.

A handful of former Mutants splinter off as Nazi fetishists. As this crew is committing an armed robbery, Batman and Robin intervene. However, Carrie disobeys Batman’s order not to engage, which nearly kills them both.

Later on she again disobeys out of excitement, setting off a bomb left behind by the Joker. The charge destroys an entire building, though Batman narrowly gets Robin out in time.

Robin is sent home, but Batman eventually sends for her to join him. He is preparing to confront the Joker once and for all. He will also have to face the GCPD, as the new Commissioner wants the vigilantes behind bars. 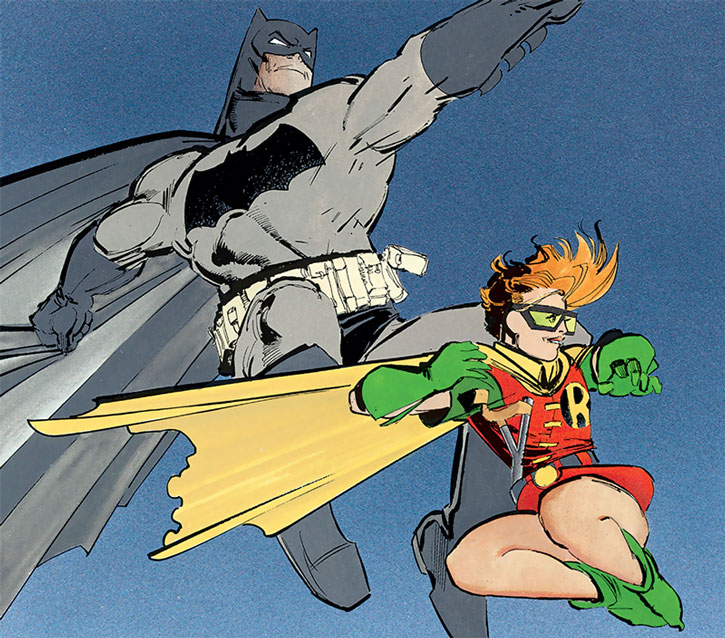 Robin once again disobeys orders, as she hacks and reprograms Batman’s helicopter. This allows her to rescue her boss, who was losing his fight with the cops. As Batman starts giving Robin more leeway, the dynamic duo determines where the Joker is going to strike at the county fair. By the time they get there the carnage has already started, to Carrie’s shock.

As Batman chases and half-contains the Joker, Robin engages the madman’s accomplice. She narrowly disarms him, but he easily overwhelms her in close combat. In the fray, Robin’s enemy is accidentally decapitated, to her further shock.

As Batman calls for backup, Robin collects herself. She uses the Batcopter to disperse the SWAT teams and evacuate the wounded Batman. Back at the Batcave, she assists Alfred as he treats Bruce’s wounds.

The East Coast of the US is hit by an EMP  as World War Three nearly starts. Batman and Robin intervene on horseback, rallying the police, civilians and the Sons of Batman to organise and weather the catastrophe.

After Robin assists Batman in his last clash with the sellout Superman, she joins Bruce Wayne’s underground militia.

The diminutive Carrie has her hair done in what seems to be a trendy style – an odd mix of pompadour and fringe. She also wears fashionable street clothing of the day, slightly oversized for her and with a high collar on her jacket.

The Robin costume is the traditional pixie boots one. But instead of a mask she wears large tinted goggles with a heavy frame, which she also sports in her civilian identity. The tint varies – yellow, green, blue, etc.

Caroline was initially aimless and looking for an indeterminate something while bored at school. Though for some older kids it was joining the Mutants, Batman was her thing.

Albeit she’s otherwise disciplined, Carrie is terribly eager to help, sometimes foolishly so. At the same time she has a knack for reading Batman, and never pushed past the line where she would genuinely get fired. Overall, they work very well together.

Like most, Robin is awed by the immensely charismatic Batman. She treats him like a cross between a father figure and a dragon. At the same time, she doesn’t really respect his old-fashioned, sort-of-parental authority. At the end of the day, Robin is doing what she thinks is right and learning her own lessons.

“The dump. I loathe the dump. But it’s the Mutants—and it sounds major. So he might be there…”

“Billy in close” (The Batcopter hovers next to the roof) “Peel.” (Boosters engage on the Batcopter)

(To herself, while in grave danger) “Billy… gone billy… can’t… believe I’m doing this… Oh, real cool… like, *all* fan… like Goodyear there… won’t dust me… before the doll… does the maximum flash… Like for this I… missed the gym finals…”

Bonuses and Limitations:
Superspeed only for Mental Tasks, and is only applicable when either learning new skills/lore or using Scientist (Computers).

Caroline often operates the BAT-COPTER [STR 08 BODY (Hardened) 09, Flight: 08, Invisibility: 03, Radar Sense: 19, Thief (Stealth): 06, Vehicles (Self): 05. Note: Thief applies both against noise (but not the downwash) and radar detection, Thief only applies up to 07 APs of Flight (the last AP is done via rocket boosters)].
It is armed with a chaingun [Projectile weapons: 10, AV 05] and what seems to be laser-directed free-flight rockets [Projectile weapons: 11 Combined with Bomb: 06, AV 05].

We assume that the majority of Hero Points she used were supplied by Batman via Leadership.

By Ethan Roe and Sébastien Andrivet.

Writeup completed on the 1st of November, 2016. 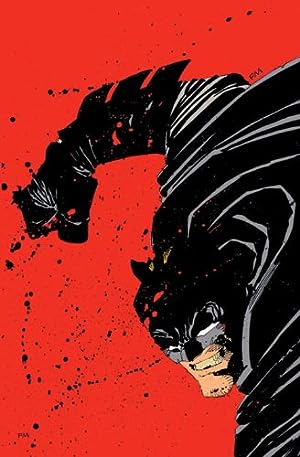 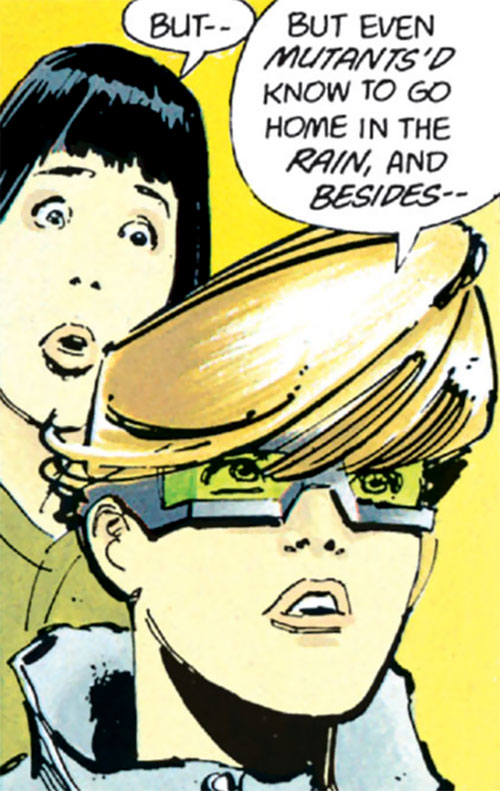 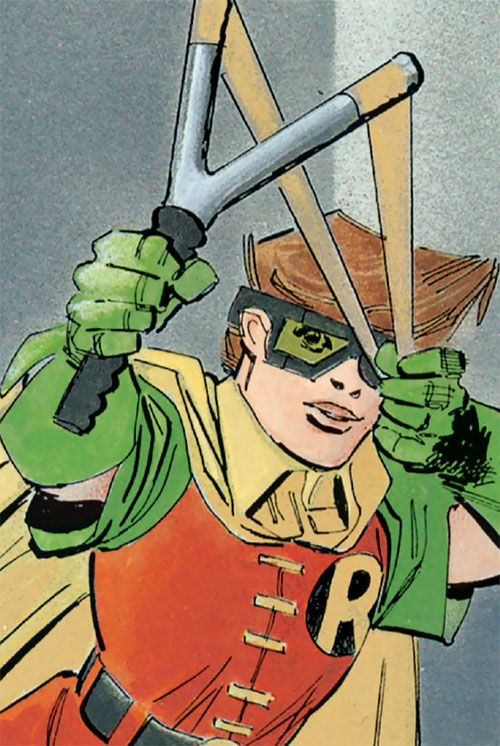 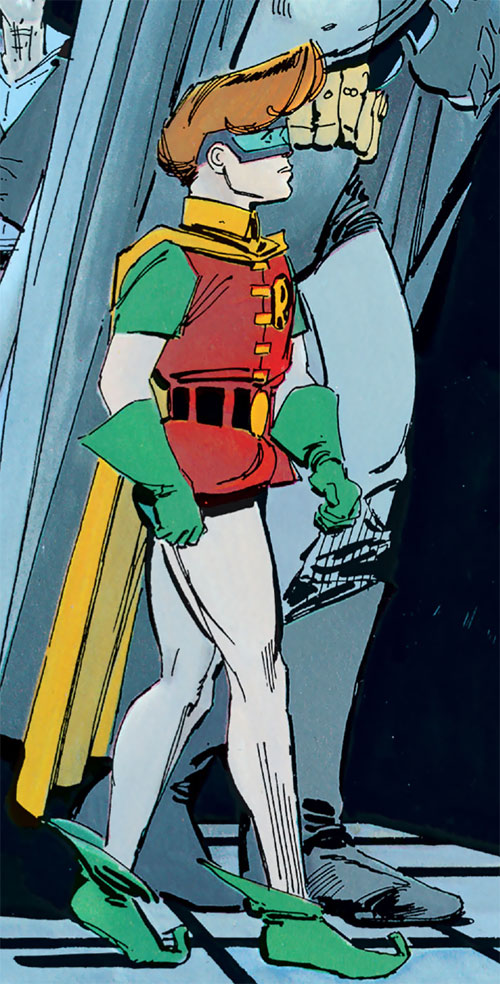 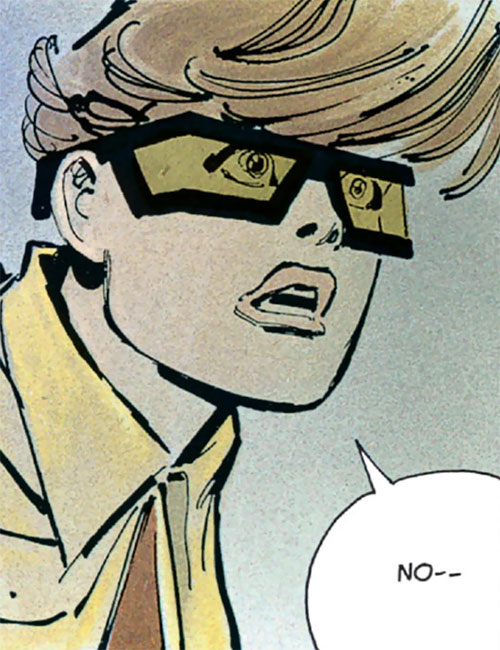 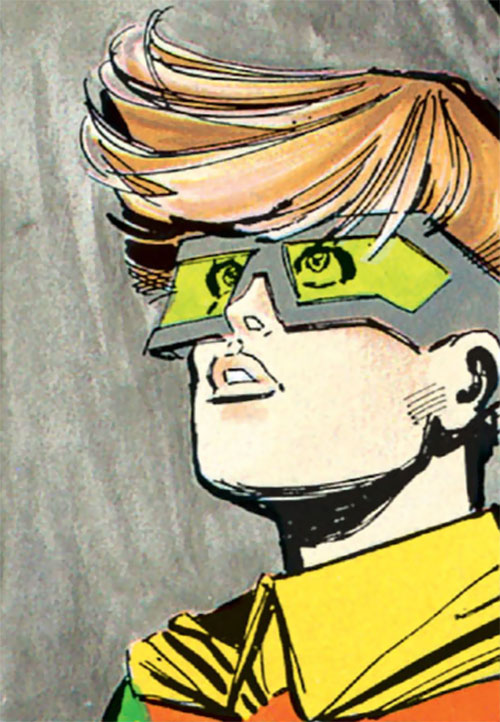