In the 1970s, Robin is less adept at fisticuffs than he was in the 1940s. He is written in a more realistic manner. While in the 1940s the Batman would let him take four or five hoodlums for fun, the older Robin can have problems with three determined thugs with bats. He has occasionally been defeated by a civilian making lucky rolls.

Robin is primarily an extremely perceptive detective with vast deductive abilities (much like his mentor), and a low-cinematic  martial artist. He does not uses gadgets much, except for his cool bike and his swing line.

He also gets a lot of mileage out of his people skill and native charisma. In those days, Batman and Robin were considered a bit like elite policemen outside of the normal chain of command, and treated with great respect by many officials.

Dick can, of course play the folk guitar. *Every* young character in early 1970s fiction could.

Jack Haly, head of the Haly Circus, refused to pay extortion money to Gotham City crime lord boss Zucco. As a result, Haly’s number one act — the Flying Graysons — became targets for the underworld. Young Dick Grayson watched in horror as his parents’ high wire snapped and they hurled to their death.

The Batman investigated the death of the Flying Graysons. He decided to adopt the young carnie and make him his partner-in-peril. A natural and professional acrobat, Dick took quickly to the extensive training and soon debuted as Robin, the Boy Wonder. 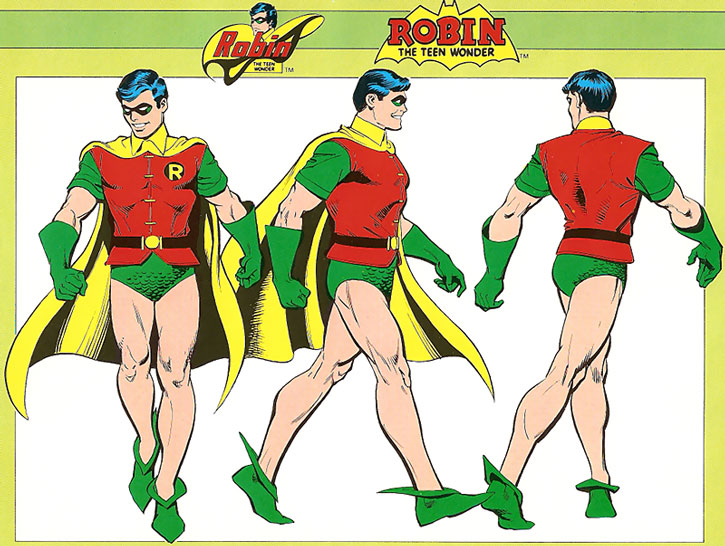 This model sheet is actually from 1982, but it works.

Over the years, Robin met several other young adventurers. Together they formed the first version of the Teen Titans. This early group achieved great success, but eventually disbanded. The teens grew older and found their time limited due to schooling and solo adventures.

A second group of Titans was formed a year after the first group ended. It came to be after young heroes defeated Dr. Light I, who was controlling the JLA. This versions was also led by Robin and included Kid Flash, Wonder Girl I, the Herald, Speedy, Aqualad, the Harlequin and the Bumblebee.

Robin also stopped being Batman’s constant partner, as most of his time was taken by his studies in the town of New Carthage. He thus shared his time between the Teen Titans, his studies and being a solo crimefighter on the Hudson U. campus and around it.

Robin still wears the green trunks and elf shoes and the like. Although he’s attractive, he’s not big-A Attractive yet.

Robin is a serious, proper, popular young man from those times. He upholds strong values, desiring to serve the cause of justice and a peaceful, fair society. Despite his age he is intense and easily wields authority. His days as the ever-punning Robin the Boy Wonder are far behind him, but he has yet to become Starfire’s lover (that will be in the next version of the Titans).

One of the constant themes in the adventures of the young detective is the social upheaval of the early 1970s, especially as he lives on campus. Robin walks a careful, wise middle line, defending the virtues of dialog and understanding between squares and hippies. Being a 1970s youth himself, he speaks those days’ slang. Note how the versatility of the verb “dig” back then.

Robin is sometimes treated like a young man, almost a kid – and sometimes as a bona fide authority figure. In any case, he does not like being underestimated or being called “son”.

“…and don’t ever let me catch you stealing again — dig ? I’ll be sending a friend of mine to rap with you tomorrow… a Hudson student named Dick Grayson.”

The Fine Art of Blindsiding

In vintage Batman stories, knocking out a man from behind is remarkably simple. In fact, by far the most common way to stop the Dynamic Duo and various bat-book protagonists is to get behind them and club them on the head, or throw a brick at them from behind. This is a Genre rule with the following clauses :

Not the fists of death

Another Genre rules from the bat-books in this period is that Martial Artist substituting for EV or RV do not seem to exist. The Battery and Defense subskills are thus not allowed. In order to be compatible, my writeups for characters from this period do incorporated those Subskills, and it is the Genre that disallows their use.

Helper(s): The history is based on the one in DC’s Who’s Who (the mid-1980s ones) ; Danielle Mendus, John Colagioia, Jay Myers, VBTusky. 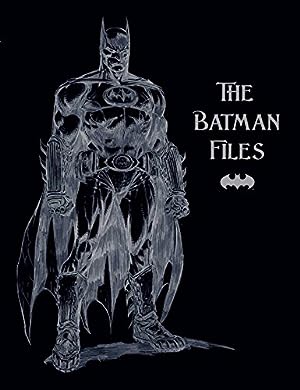 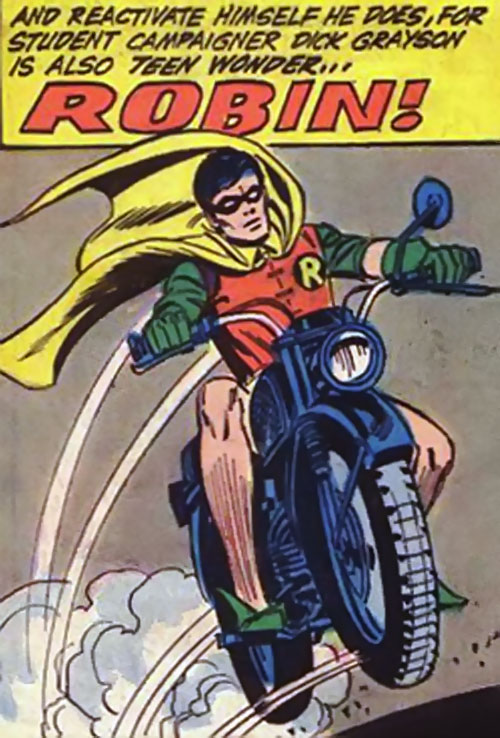 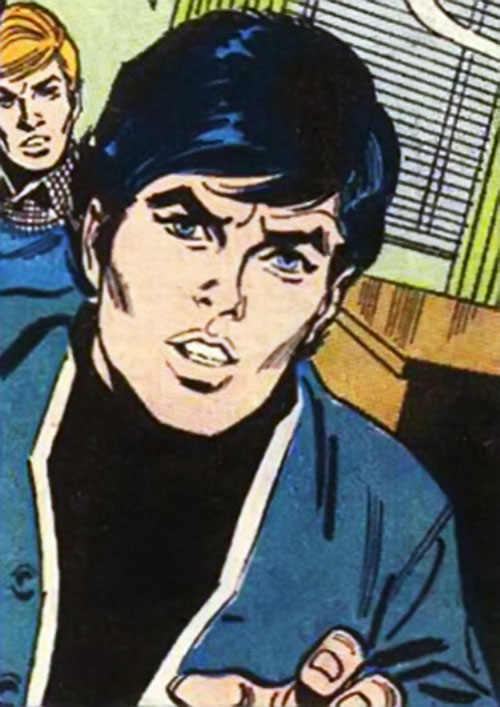