Before his cybernetic enhancement, Alex Murphy was a skilled police officer.

His subsequent alteration built on those abilities by providing him with a cyborg body with superior strength and durability (his armor shell is titanium laminated with Kevlar) as well as various on-board extras including a HUD computer interface, a radio transmitter, and infrared vision capability.

In the near future Omni Consumer Products (OCP), a mega-corporation headquartered in Detroit with additional holdings around the globe, controls the city of Detroit. OCP has even taken over a number of civil functions, including the Detroit Police Department. It is now a licensed arm of OCP’s Security Division.

OCP’s handling of various municipal functions is not as benign as it seems. Instead, the secret purpose of these civil projects is to allow OCP to use Detroit as a test bed for various products. The newest OCP experiment is “Delta City,” a massive renovation project that will turn “Old Detroit” into the city of the future.

Another secret OCP agenda was Senior VP Dick Jones’ ED-209 military droid program. Dick Jones had covertly secured the participation of the criminal mastermind Clarence Boddicker. Boddicker would lead a gang of thugs in a series of cop-killings, which OCP would then respond to by putting ED-209 droids on the street.

The publicity from this would aid Jones in selling the 209s to the military. In exchange, Jones would help Boddicker get in on the ground floor of the black market that would inevitably rise around Delta City’s construction workers: “drugs, gambling, prostitution…”

Boddicker went to work. Within a short period of time he and his gang managed to kill over 30 police officers. Then Jones’ plan hit a snag. A simple demonstration of the ED-209 resulted in the death of an OCP executive when the 209’s artificial intelligence malfunctioned.

Seizing the opportunity, an aggressive young Security Division executive named Bob Morton pitched his Robocop program as an alternative. By using cyborgs with human judgment abilities, accidents such as the one with ED-209 could be avoided. To Jones’s considerable agitation, Morton was given the go-ahead. Now, all he had to do was “wait for some poor schmuck to volunteer.”

To accelerate the process of finding a volunteer, OCP began moving its best policemen into high-risk precincts. Once one was killed, OCP would salvage the brain for use in the Robocop cyborg body. This was legal due to a clause in the OCP contract that made their employees’ bodies company property if they died at work.

One of these “best and brightest” cops was Alex Murphy. Soon after his transfer from Metro South to the Old Detroit station, he ran afoul of Clarence Boddicker and his gang. Murphy was tortured and killed. OCP claimed the body and installed Murphy’s brain in Robocop, erasing any knowledge of his life before becoming a cyborg, but maintaining his knowledge and experience.

The future of policing

Robocop was sent on the streets to the awe and delight of the citizens and most of the police. Robocop quickly became a celebrity.

However, a couple of problems arose. First, Robocop was beginning to remember details of his old life, a process aided by his encounters with individuals that were part of his previous life.

Second, Dick Jones was furious at the success of the Robocop program, which had effectively derailed his ED-209 military sales. Dick Jones decided to fix the situation by having Bob Morton killed, a task carried out by Clarence Boddicker.

Soon after Morton’s murder, Robocop captured Boddicker, who told Robocop he was working for Jones. Robocop went to the OCP Building to arrest Jones. The arrest went awry when the previously hidden Directive Four kicked in, barring Robocop from taking any action against an executive of OCP.

Jones then sicced ED-209 on Robocop and called in the SWAT team, claiming Robocop had malfunctioned and had to be destroyed. Robocop escaped ED-209 and the SWAT team with the help of his old partner, Officer Lewis. He went into hiding in an abandoned industrial park.

The deteriorating conditions led the police department to strike at this time, which played right into Dick Jones’ original plan. Jones put ED-209s on the street. He also armed Boddicker and his gang with Cobra assault cannons and a tracking device to hunt down and kill Robocop.

Robocop dispatched Boddicker and his gang with Lewis’ help. He then made his way back to the OCP Building. He crashed a board meeting there and played a recording from his memory banks of Dick Jones gloating over having Bob Morton killed. Jones then grabbed a gun and took the CEO of OCP hostage.

Robocop explained to the CEO that he was programmed not to take action against an OCP officer. The “Old Man” promptly fired Jones and Robocop took Jones out. The Old Man said, “Nice shooting, son. What’s your name?” To this, Robocop replied, “Murphy,” with a smile.

Robocop’s name was then cleared, of course, and he was repaired and sent back out to patrol the streets of Old Detroit.

In his previous life, Alex Murphy was a tall Caucasian male with a thin build and angular features, on the verge of being gaunt. Fortunately, his wide grin and shining blue eyes made for a more favorable first impression than his features would suggest. His bearing and posture betray his cocky attitude.

On the other hand, Robocop looks like a high-tech knight, “his glittering raiment an inspiration for a besieged city and a source of fear for criminals everywhere ©!”

The bulk of Robocop’s body is covered in blocky gunmetal gray armor. Robocop’s abdomen, hands, and neck are armored in hi-tech black plastic rather than metallic plates to allow sufficient range of motion.

His face, the upper half of which is normally concealed by his helmet, still appears human. Howbeit, it may also be a life-like plastic mask molded from the original. It’s never suffered damage despite all of the shrapnel thrown around in Robocop’s vicinity (including the shattered visor of his own helmet) and Robocop’s once being covered with flaming gasoline.

His helmet looks like a smooth chrome hockey helmet. It covers the entire top half of Robocop’s head with a thin black transparent slit over the eyes. The helmet’s retaining bolts are sunk flush into his helmet where a human’s ears would be.

Robocop’s body language was very limited at the start of his career. He moved in a stiff, mechanical way and had almost no vocal intonations. As his memories returned he also began moving in a more human manner and became more expressive both vocally and in terms of facial expressions.

Alex Murphy was a cowboy, cocky to the point of recklessness. He was also resolute as a hero opposing the criminal dregs of Detroit. He often twirled his pistol and threw out quotes like, “Dead or alive, you’re coming with me.”

His bravado ultimately led to his death, when he pursued Boddicker’s gang into their hideout with only his partner for backup and was captured, tortured, and then shot in the head.

As Robocop, Murphy’s personality hasn’t changed much. He’s more formal in bearing, but still has the same basic attitude, twirling his Auto-9 before re-holstering it and confronting criminals with lines such as, “Drop your weapons or there will be…trouble.”

He still has his characteristic overconfidence, always going in without backup. Given his new cyborg abilities, he has a lot more reason to act like a one-man army, but this tendency can still land him in hot water.

When Murphy’s memories of his previous human life began to emerge he vacillated between seeking more information and burying himself in his duty by hunting his killers. For the moment, he seems to have come to terms with his loss and moved on, devoting his new life to his work, but it is possible that he will still have some adjusting to do.

Prior to the re-emergence of his human memories, Robocop approached everything in a very direct and forceful manner and never spoke unless necessary. As Murphy’s personality resurfaced he became more like his old self, though he was still a little stiffer than before.

“Dead or alive, you’re coming with me.”

“Come quietly, or there will be… trouble.”

“Excuse me. I have to go. Somewhere there is a crime happening.”

When Dick Jones is holding the Old Man hostage:
Robocop: “My programming does not permit me to take action against an officer of this company.”
The Old Man: “Dick, you’re FIRED !”
Robocop: (smiling tightly) “Thank you.” (blows Jones away)

Robocop works best in his natural environment — a near-future capitalist dystopia. There are areas in the DC Universe where he would fit in; Suicide Slum in Metropolis and Gotham City come to mind.

Robocop would most likely be a Lexcorp experiment. The whole Robocop storyline could be imported whole cloth into Gotham City during the rebuilding after “No Man’s Land”, with the reconstruction replacing Delta City.

If you want Robocop in Metropolis instead, then Lex wants to get the city to take the entire Suicide Slum by eminent domain and sell it to him for a song. To accomplish this he used his organized crime contacts to foment rampant violence and criminal activity in that area. Meanwhile he’s also “helping out” Metropolis’s finest by selling them substandard hi-tech gear.

As this plot was unfolding so was a plan to manipulate Emmett Vale into creating another anti-Superman cyborg. This time one with programmed Directives that to allow Lex to control it.

After a police officer is killed by Lex’s criminal compatriots, Vale steals the brain for his mechanical monstrosity. He uses the same brain transplant technology used to put Luthor in his clone body to place Murphy’s brain in Robocop.

Some months later when Robocop was ready to go, Lex arranged to lease him to the MPD as a prototype robot to help clean up the mean streets of Suicide Slum. Unfortunately for Lex’s schemes, Murphy’s traumatic amnesia began receding and he started regaining his personality and memories.

Although a shadow of the man he once was, Murphy began unraveling Lex’s twisted dealings in Suicide Slum. So far he has only been able to nail those on the lowest rungs of Lex’s criminal pyramid, although Lex did have to sacrifice a fairly prominent executive of Lexcorp in order to distance himself from an uncovered Lexcorp connection to a criminal.

Note:
Most major cities have signal boosters for municipal communications (emergency services, police dispatches, etc.) placed throughout the area, so Radio Communication effectively covers the entire city so long as Robocop is within 12 APs (four miles) of a booster. This applies to anyone using the appropriate frequencies.

Secret Identity assumes that the general public still thinks Robocop is only a robot; if his true nature as a “Frankenstein’s Monster” were revealed, it might cause the loss of Popularity (GM’s decision).

Robocop’s CIA functions differently than standard CIAs. When Robocop tries to violate one of his directives, a warning flashes on his internal HUD and if he does not cease his violation immediately, he becomes paralyzed.

Roll each round against the CIA : a success means Robocop is no longer paralyzed, but another attempt at violating a directive will paralyze him again in the same manner. Robocop’s prime directives, in order of importance, are:

It is possible for these directives to be reprogrammed. Any reprogramming attempts must beat an OV/RV equal to Self-Link: Gadgetry.

When Murphy first became Robocop he suffered from Traumatic Flashbacks relating to his death. Robocop also suffered the Socially Inept Drawback at first as his human instincts and behaviors had been largely suppressed by his transformation. These Drawbacks were gone by the end of the movie. 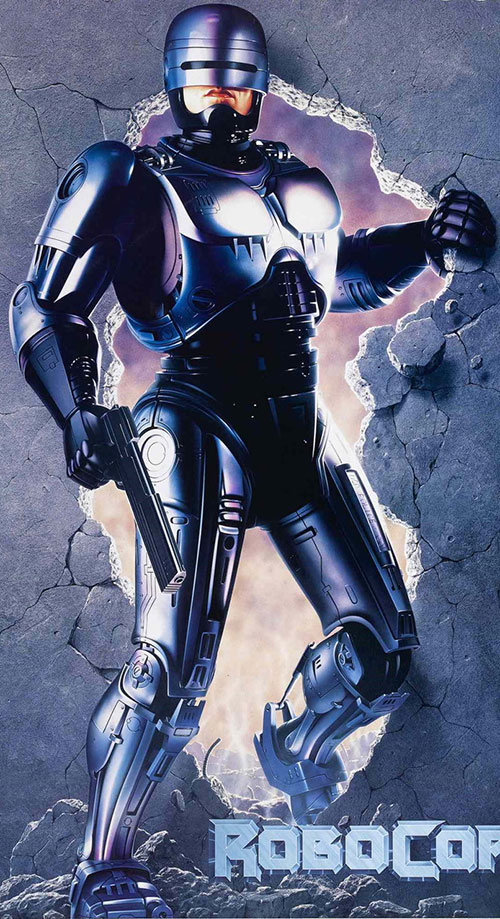 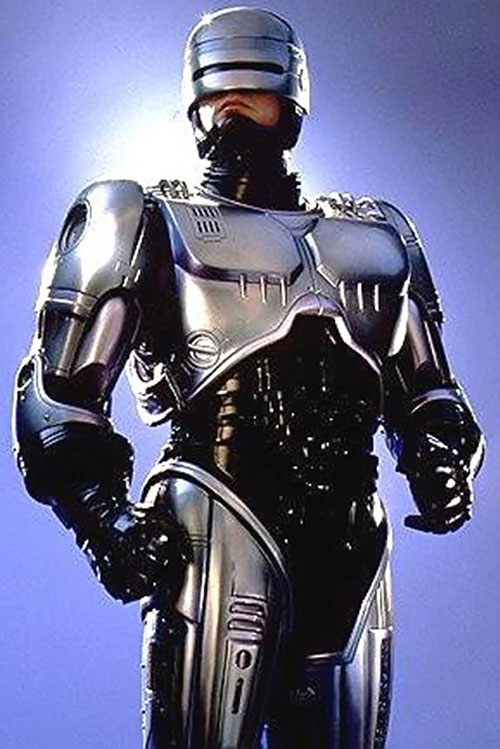