He does not feel pain – most punches, blades and bullets will fail to do significant damage due to his powerful muscle mass. Even a crack shot with excellent weapons like the Punisher couldn’t seem to stop him.

Roc could even survive a broken neck, staying conscious and active despite the normally fatal wound.

Roc is an assassin from Madrid. He was recruited by Rosalie Carbone to kill the Punisher, along with six others. Alone and in small groups, the killers attempted to take down the Punisher, but failed with terminal results.

Roc was part of the most sophisticated attempt. It was led by another hired killer, Cane, along with the mercenary called Combat. They located and interrogated Mickey Fondozzi, an informer associated with the Punisher. However Fondozzi lied and sent them into a hideout full of Tong gunmen.

The three assassins won the subsequent battle, but Fondozzi escaped due to an incredible stroke of luck. The Punisher retaliated by kidnapping Carbone.

Carbone’s men and the surviving assassins then fought each other. They were attempting to get the Punisher, rescue Carbone and earn the $5M bounty. Roc reached the Punisher first, hit him before he could shoot and pummelled him to near unconsciousness. However an ally of the Punisher, Microchip, came in shot Roc in the head, leaving him for dead.

Roc survived the wound. Microchip probably got very lucky when his bullet managed to knock the man-mountain out for a significant amount of time. The killer then spent the next few weeks stalking the Punisher and interfering with his missions.

He drew Castle into a rematch, toying with the much smaller vigilante, until Castle managed to strategically dislocate Roc’s knee via repeated blows. Castle then jumped on the downed giant and broke his neck… which still didn’t stop him.

Roc managed to grab Castle by the neck, and Frank only dislodged him by carrying the fight underwater and knocking the wind out of him.

Roc still kept coming after him, until Castle managed to crush his windpipe. After Roc suffocated, Castle covered him with explosives and blew his body to pieces.

Roc is a dim-witted Neanderthal who says little. He prefers to express himself through grunts instead of making the effort of finding appropriate grunts and sentences.

His second appearance reportedly had him being much more talkative and clever, for no clear reason.

Drawbacks:
Creepy Appearance (huge muscular brute), MPR (will not even feel attacks that fail to cause pre-LDD RAPs). 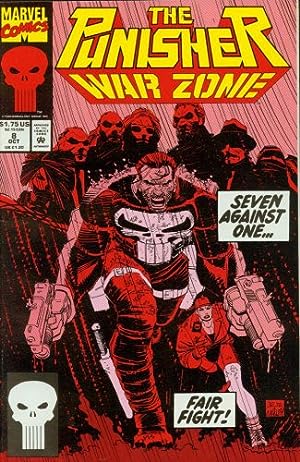