But that doesn’t mean that he wouldn’t be a great character to join any young team of superheroes — especially given his incredible potential.

Mr. Howard is the son of one of the most feared reoccurring villains in his universe. Furthermore, he was personally trained from a very early age by one of the greatest and most respected heroes.

He’s also a fan favorite and was even once voted the number one character in the series. So not including him a Fatal Fury/King of Fighters set would be a huge misstep.

Much of Rock’s fighting style is a mix of moves used by Terry and Geese.

Terry’s unique fighting style was a mix between boxing, karate, kung fu, kickboxing and street fighting. Whereas Geese’s was primarily based on aikijutsu.

Rock knows both men’s energy manipulation abilities (which they are both said to gather from mother earth), and can intuitively sense the presence of others.

Rock’s hybrid nature doesn’t mean that he has both his father’s power and Terry’s simplicity. Rather, he’s a complex and well-rounded fighter. He excels in varied situations such as mix ups, applying pressure and even some mind games. Mr. Howard has all the standard staples such as a projectile, anti-air, and plenty of rush downs.

His main downside is that even though he’s a good character across the board he’s got a lot of complex moves that can take a while to master. And some of these can leave him wide open if a player isn’t familiar with the character.

Outside of the ring he’s said to be skilled in gymnastics, basketball, cooking, and motorcycle racing.

He also is an accomplished bass player and can remember and recreate any tune he’s ever heard. 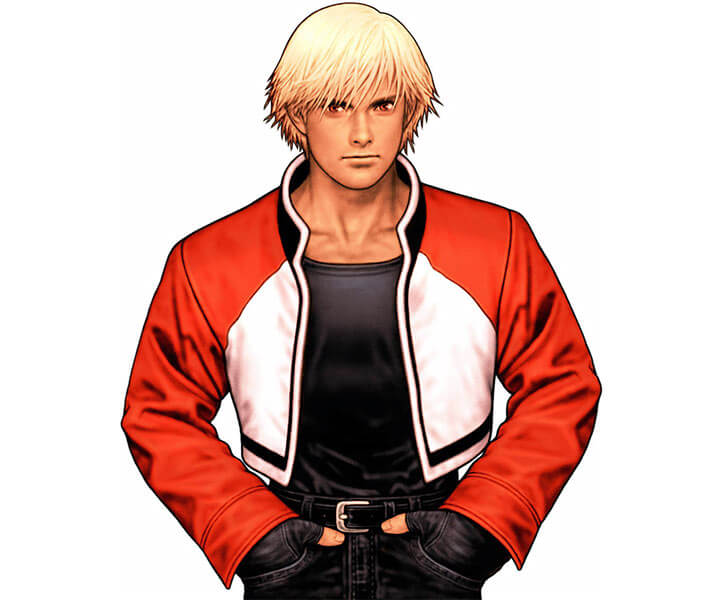 (Rock’s story has been a bit muddied due to constant retconsMaking changes to a character or story after the fact. Say, whether or not Geese is alive or dead – multiple times. And his existence is never mentioned until his debut game Garou Mark of the Wolves – which essentially retcons the entire series).

Geese Howard lived a double life. In his public life he was the CEO of the mega conglomerate Howard Connection. Having worked his way up from nothing by pulling himself up by his bootstraps, he was seen as a true working-class hero of rags to riches fame, and a major philanthropist.

But in the underworld he was one of the most powerful and ruthless crime lords. Not just in America, but the entire world.

That he had a wife and child was kept a secret. Presumably because his enemies might try to exploit his family as leverage. He rarely saw them, and had almost nothing to do with them. When his wife eventually fell ill and died, Geese was nowhere to be found.

Geese just kind of forgot about his son Rock. He went about his life of constantly scheming to obtain supernatural powers and become the strongest fighter in the world.

This neglect enraged Rock. He decided to confront his father and make him pay.

But things rarely go as planned. When Rock stormed Howard’s Connection Tower, he only found a very winded Terry Bogard. Terry had just defeated Geese, and the final blow had sent him Mr. Howard the edge of the building.

(Terry being the good guy did heroically try to save him. But of course Geese refused his help and supposedly plummeted to his death.)

Rock angrily demanded that he speak with his father right this instant. Terry, unsure of what to say didn’t give him an immediate answer. Rock lashed out in fury with a much weaker version of one of Geese’s rush attacks. Terry had to knock him out for his own safety. 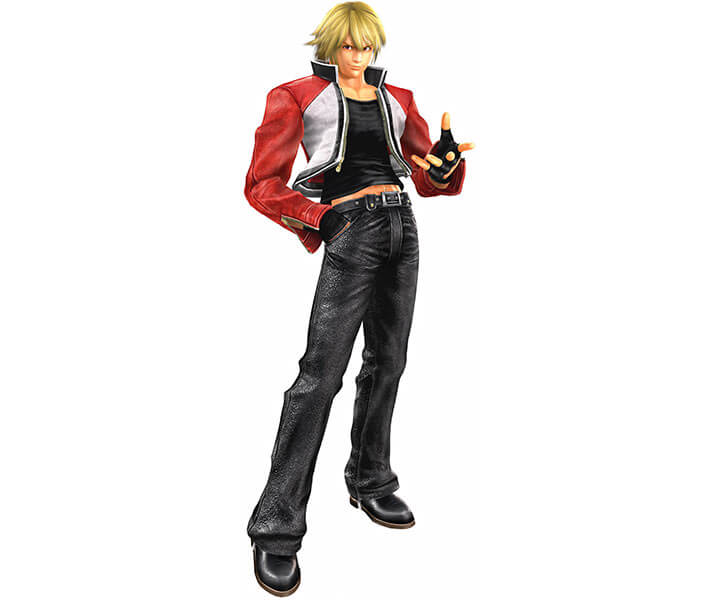 Mr. Bogard took the unconscious kid for a sidecar ride. Once they got to an isolated spot on the coast he allowed the kid to come to and verified that he was indeed the son of his archnemesis Geese Howard.

(There are conflicting accounts on whether this happened in Fatal Fury 1 or 3. The latter would seem more likely and fit into the timeline, but the former is still possible).

Terry wasn’t exactly sure what to do with the child. But he knew that with the raw power that he had inherited from his father and the rage he had expressed earlier, Rock could easily go down a very dark path. After contemplating for a bit he decided to take him in and raise him as his own. And just like that Terry became an adopted father.

(It seems likely that much of the actual parenting was done by Terry’s former teacher Tung Fu Ru and friends of this. Bogard’s never been a responsible guy with a stable lifestyle).

(This SNK web series essentially merged the Fatal Fury 1 and King of Fighters ’94 stories into one. Since it conflicted with the canon version, it is likely in its own continuity).

In episode 11 Rock appears as a street kid forced to fend for himself. He gets caught trying to steal food from a café. To get out of trouble he pretends that Terry is his father. Terry reluctantly pays for the food before giving the kid a lecture. But they eventually realise that they are both connected to Geese Howard.

This act of kindness convinces Angelina, an assassin intent on wiping out Geese’s legacy, to not poison Rock. So as to allow the child a chance at a somewhat normal life.

Garou Mark of the Wolves

Time for a new generation of fighters in the Fatal Fury universe!

This game was essentially Rock’s coming of age story with him thrust into the spotlight.

A new King of Fighters tournament takes place on short notice, in South Town. It reverts to the old rules of only having one on one matches. Both Rock and Terry enter to investigate the organiser, and both advance to the finals.

Terry fought hulking wrestler Grant. Rock fought the host, Kain R. Heinlein. Who (plot twist!) turned out to be his uncle on his deceased mother’s side. The fights were so furious that they each destroyed one of the buildings on Heinlein’s huge estate.

Both Rock and Terry emerged victorious. Rock, upon learning that he had an uncle who cared about his well being, left with him for a training journey.

While Terry didn’t trust Kain, and knew Rock needed support not to follow Geese’s path, he eventually considered that Rock was old enough to make his own decisions.

Garou Mark of the Wolves 2

(This game was announced and was in the early stages of development. But bankruptcy forced SNK to shelve the project. After a few years of drama, they did bounce back. But the audience had moved on, and the game’s development did not resume).

Leaked notes seemed to indicate that Rock would eventually get corrupted by his uncle’s evil magic. It was strongly implied that this would bring him into conflict with Terry.

That said it’s kind of hard to say what direction they would have taken. Kain was a mysterious and aloof magician – and his true motivation was never revealed. 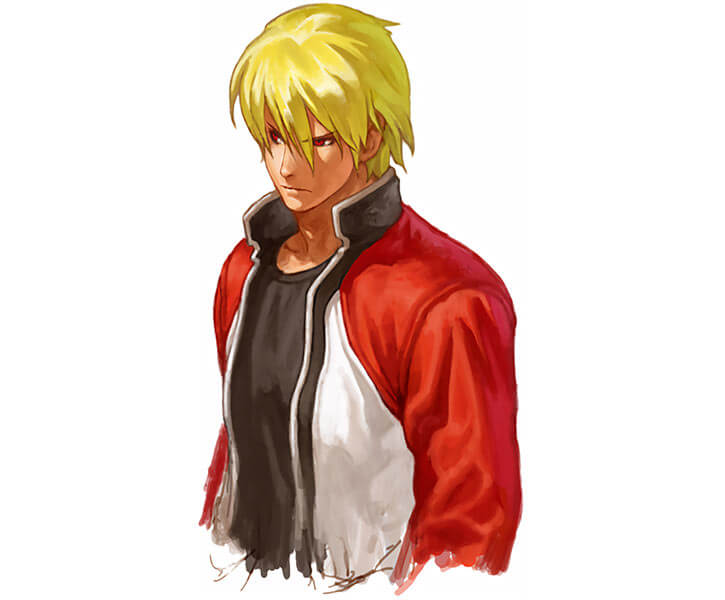 (These were animé shorts to promote upcoming SNK series King of Fighters Maximum Impact Regulation A, possibly their new flagship title. The new South Town characters were different from what had come before. But the project was eventually scrapped, and the animes may or may not be canon).

Rock had a nightmare. Terry was fighting him just as he had Geese, and knocked him off Howard Tower. The youth got out for fresh air, but was shocked to see that the city was in flames.

Lightning struck Howard Tower, and Rock went to investigate. On the rooftop, he happened upon Billy Kane and Lien Neville. Ms. Neville had been sent to kill all those connected with Geese Howard. Kane defeated her, but Howard saved her life.

Billy turned against Rock, who he saw as a disgrace to Geese’s legacy. But Lien came to, and activated another “lightning strike” – actually an orbital laser. Both Kane and Howard had to flee, but Lien decided not to go after Rock out of gratitude.

While leaving the Tower, Rock noticed that a portrait of his mother was missing. As it turned out Terry had rescued the painting and brought it to their home.

(Again, this may or may not be canon).

Rock participated in this tournament. But the main story followed brothers Alba and Soiree Mira.

Rock and Terry, like quite a few other characters, were just kind of there as side pieces rather than be the main focus of the series.

Rock wasn’t originally part of the game, reportedly to avoid stepping on the toes of the Fatal Fury team.

He eventually showed as a DLC character due to fan demand. But that means he had little impact on the main story. 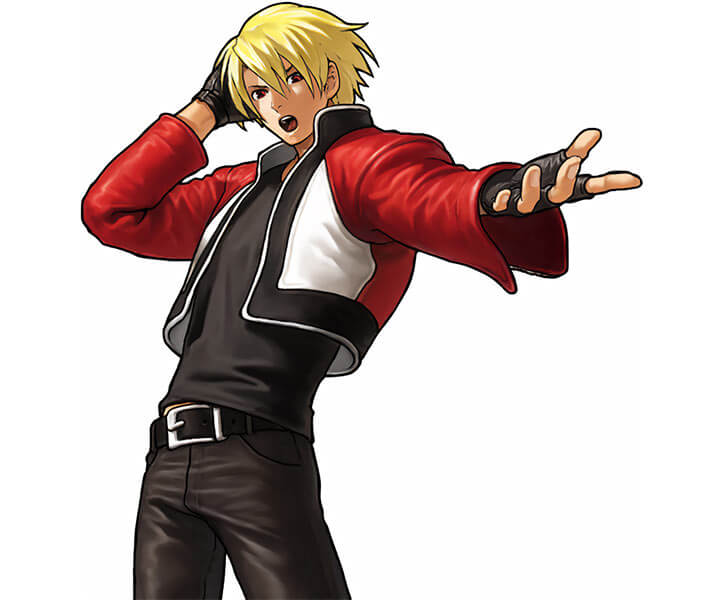 Rock is a handsome young man with blond hair and amber eyes.

He wears a stylish multicolored jacket, biker gloves and jeans and sneakers.

In stark contrast to Terry’s gregarious and outgoing personality, Rock is a bit shy and reserved. Particularly around women, and especially those who are older than him. He was mostly raised by men, and he just doesn’t seem to get the fairer sex. The one exception is his friend Hotaru Futaba, who has always been kind to him.

His lack of social skills and confidence likely are because he’s his father’s son. Rock possesses a lot of his evil impulses, and it’s something that he has to keep at bay on a daily basis.

That said he is a fine young man. He’s strong, compassionate and mature for his age. And he was properly raised by Terry and other heroic characters who have showed him how to stay on the right path.

That said, Terry just plain isn’t a responsible adult. He just doesn’t have much motivation outside of the ring or doing the occasional heroic deed. While Terry is technically his adopted father their relationship is a lot more like Terry’s the fun-loving older brother who looks out for Rock while Rock quietly supports his brother in his endeavors.

One example of this is that Rock frequently makes brown bag lunches for Terry, often including delicious sandwiches. As he knows that Terry will likely just eat convenience store junk food, fast food, or other similarly unhealthy options.

This entire experience has actually forced Terry to become a bit more responsible. And he drinks less since Rock came into the picture.

Rock also values his friendship with Kim Kaphwan’s children Kim Jae Hoon and Kim Dong Hwang. They have sparring matches whenever the Kims are in (dangerous) South Town.

“Destruction is the cost of selfish ambition.”

“I want to forget myself and fly away from it all !”

Source of Character: Garou: Mark of the Wolves.