Rock Python has displayed superhuman durability and some level of enhanced strength, but these aren’t inborn. It is likely that he had himself successfully enhanced, perhaps using a variant over the chemicals used to augment Fer-de-Lance.

His body is said to be rock-hard. So he likely chose his code name while he was saving up to have his enhancements done.

Rock Python could withstand blows from the superhumanly strong Battlestar. Yet he’s not immune to the mechanical effect of strikes to weak points, such as the back of the knees. Blows from Shang Chi also seemed able to affect him to an extend.

M’Gula’s grip is particularly strong. It too is stone-like, though he could not outwrestle Battlestar. He’s not too bad at grabbing people.

Rock Python’s chief weapons, before or after the enhancements, are egg-shaped metallic projectiles. These thrown weapons have a variety of payloads, detailed in our game stats.

In the stats, I’ve have assumed that Rock Python designed and built his own weapons. Though he’s proud of his durability and strength, he prefers to fight with thrown metallic eggs.

Rock Python hails from Rudyarda, a tiny state in the Great Lakes Region. It was founded by Boers who left South Africa after the second Boer War.

M’Gula grew up when Rudyarda was still an apartheid  state. He apparently attended a vocational school. English might be his first or second language, since it is commonly spoken there. M’gula has a criminal record in Rudyarda (though, as a Black youth in an apartheid state, it might be spurious) and in Gambia. Eventually, M’Gula left tiny Rudyarda for the US.

Rock Python was one of the previously unknown serpent-themed mercenaries recruited by the Viper (Ophelia Sarkissian). The goal of that operation was for her double agents to infiltrate Sidewinder’s Serpent Society to stage a coup and take over.

Her other agents included Fer-de-Lance, Puff Adder, Coachwhip, Black Racer, Rattler, Anaconda, Cottonmouth and Slither. Some of these were initially Sidewinder employees who were convinced by the Viper to betray him. During the coup, Rock Python was knocked out by Nomad (Monroe). The coup eventually failed.

Not too long after these events, Rock Python had himself enhanced for superhuman strength and durability. Perhaps the windfall from the Viper was the last bit he needed.

Three serpent-themed Viper agents (Rock Python, Coachwhip and Puff Adder) later attacked the Falcon (Sam Wilson) to steal his costume. They were defeated by the Falcon and a visiting Battlestar. Battlestar managed to knock Rock Python out by defenestrating himself along with his opponent and landing on top.

The goal of the attack was unclear. The Falcon theorised that it might have been a proof of good will to rejoin the Serpent Society now that the Viper was no longer around.

By the time the Cobra had taken over the Society and Sidewinder left, Rock Python (among other former Viper operatives) was again a Serpent Society member. He thus was present when the Society was hired by Ghaur and Llyra to recover artefacts related to the Elder God Set.

Rock Python recovered one such artefact, only to realise that his team had been flattened by the X-Men while he was busy. Faced by Rogue, Havok and Colossus, he wisely surrendered.

During the Diamondback trial within the Serpent Society, Rock Python voted for her to live. Still, when she escaped, Rock Python was on one of the teams hunting her down. He, Anaconda and Puff Adder clashed with Captain America (Steve Rogers), who was also looking for her. Cap was surprised by Rock Python’s durability, and let his opponents think that they had killed him so he could resume looking for Diamondback unhampered.

Thus, for a few hours, Rock Python thought that he was the man who had killed Captain America, by grabbing his ankle and throwing him off a roof.

Anaconda, Rock Python and Puff Adder eventually found Diamondback and two other renegades (Black Mamba and Asp), capturing them. However, this victory was ruined by MODAM, who attacked and threw Puff Adder and Rock Python from their Serpent Saucer. Both men had to be hospitalised after the fall, even with their durability.

Past the glory days

Like everyone and their dog, Rock Python was present at the big AIM weapons expo on Boca Caliente. He tried to stop Captain America when it was revealed that he had infiltrated the trade show, disguised as Crossbones.

Rock Python kept operating as a Serpent Society operative. During a very minor job (a bank heist in a small town in Arizona), he and Fer-de-Lance ran into Jack Flag. They were surprised and defeated, but Jack Flag was then clobbered by a nearby Anaconda. Some hours later, Rock Python and the rest were completely outmatched and defeated by Force Works.

During a subsequent case, the assembled Serpent Society managed to capture Captain America and Diamondback, and steal his shield. Most Serpents, including Rock Python, were eventually thoroughly and single-handedly thrashed by Diamondback. But it later turned out that “she” was a souped-up LMD .

Rock Python was later seen at a Bar With No Name, along with numerous minor villains (including some Serpent Society colleagues). He got into a brawl with Spider-Man, but the bartender almost immediately ended the fight.

Rock Python seems to be a pretty ordinary criminal and mercenary. He’s violent and without scruples, but not particularly vicious or hardcore. He might be even called a reasonable guy, and seems to be just in for the money. He fights in a tactically sound way and is a decent team player.

Rock Python is apparently proud of his enhanced durability, and enjoys showing it off. But not to the point of taking gratuitous risks.

(After Captain America kicks him in the head with little effect) “[My] head […] is hard as rock. Or did you think the name Rock Python referred to my taste in music ?”

Bonuses and Limitations:
EV only useable as his Wrestling (not Grappling) Effect Value.

Drawbacks:
None demonstrated, though he has been accused of having an Easter fetish.

Equipment:
It is difficult to estimate how many metal eggs Rock Python carries. A possible loadout is:

Pre-enhancement, Rock Python likely had STR 03 and BODY 04, and of course no Skin Armour. His snake-wrap eggs also seemed weaker, and had Glue: 05 rather than Snare. 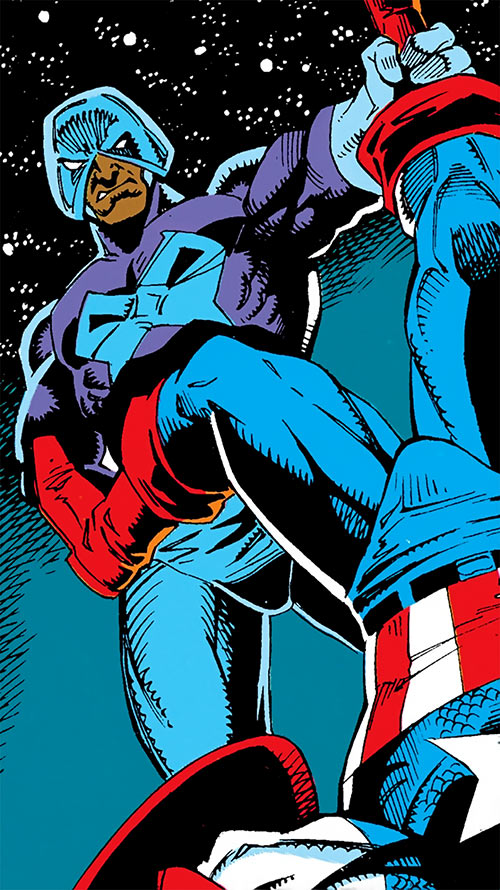 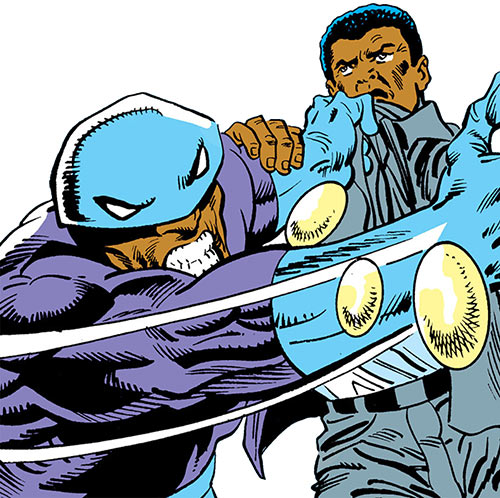 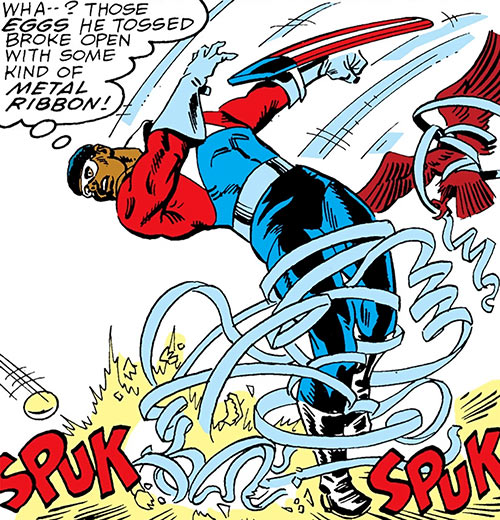