His skate board is rocket-powered and cybernetically controlled. The Walkman™-like thing on his head is actually the controller. It has enough fuel for a 75 miles trip. With enough momentum, the Racer will effortlessly surf over vertical walls.

The Rocket Racer’s gauntlets can launch small yet powerful rockets. Most are straightforward projectiles with a high-explosive warhead.

Some are modified to instead boost a punch by providing a short but powerful acceleration. Those “rocket-powered punches”, as he calls them, can stun even Spider-Man.

Farrell is quite acrobatic and a master skater. He loves performing impressive stunts at high speed. A typical example was somersaults over a passing car – and landing back on his board, who has zipped under said car.

Robert Farrell is the oldest child of a family of seven in New York City. He always loved skate boarding, to be alone and free with the wind in his face.

When his father left, he did various odd jobs to help his mother while exploring his second great love, science. He joined the Air Force to earn money to support his family and explore various areas of technology. Although the Farrells weren’t rich, things were looking up.

Then his mother had a stroke. Robert was unable to pay both the bills for the hospital and the support of his younger siblings. Desperate for money, he turned to crime. Farrell used his technological skills to build the first version of his gear. After months of training, he became the Rocket Racer.

His first attempt (the theft of a briefcase full of negotiable securities) didn’t go well. Spider-Man stopped him and turned him to the police.

After this episode, the Rocket Racer worked for the Tinkerer, in exchange for both money and improvements on his gear. One of his crimes reawakened an old feud with one Jackson Wheele, who attempted to kill him as the Big Wheel. Spider-Man saved the Racer’s life. 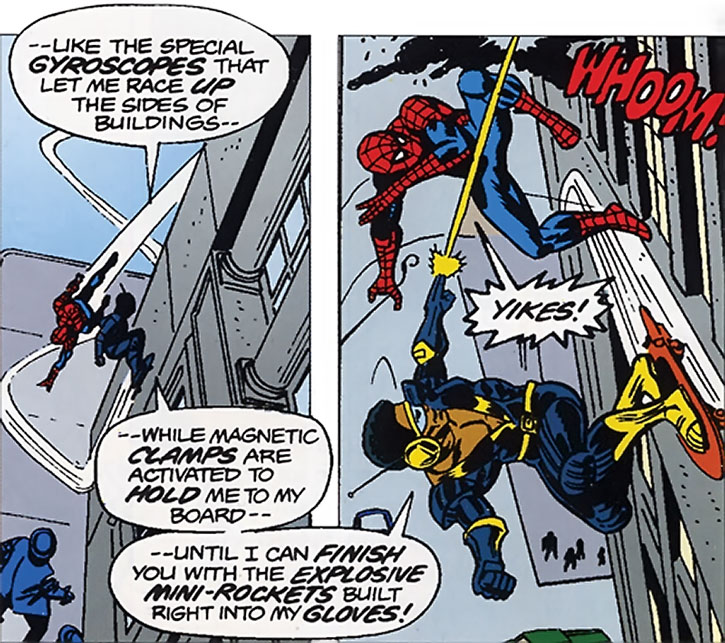 The Rocket Racer was later apprehended by the police, but allowed to make bail. However, the bail bondsman demanded enormous interests and wanted Robert to commit crimes to pay up. Farrell refused, an the bondsman sent a the Bounty Hunter after him to make an example. Spider-Man interfered, and the Rocket Racer saved Spidey’s life from the Bounty Hunter.

After some more jail time (turned into a community service sentence), Farrell received a full scholarship at the ESU, in electrical engineering. Farrell supports his ailing mother and younger siblings by occasionally acting as a hero for hire. He sometimes work for Silver Sable International as a member of the Outlaws.

He regards Spider-Man as his hero. Thus, the Racer once intervened to foil an attempt by Silver Sable to capture Spider-Man. That gave the web-crawler enough time to explain the misunderstanding.

The Rocket Racer’s current costume is in red and gold. His very first costume was in dark blue and gold is illustrated last.

Farrell’s hair style loosely follow fashion, from a small afro in the 1970s to shaved sides with corn rows in the 1990s.

Farrell is a good, free-wheeling guy with an usually cheerful attitude despite his financial and familial troubles. He’s now on the straight and narrow.

“I perfected all sorts of gizmos before I went public, ace — like the special gyroscopes that let me race up the sides of buildings, while magnetic clamps are activated to hold me to my board — until I can finish you with the explosive mini-rockets built right into my gloves !”

He’s so minor, go ahead… He could be a Robin foe, whom Robin later helped reform as Nightwing. 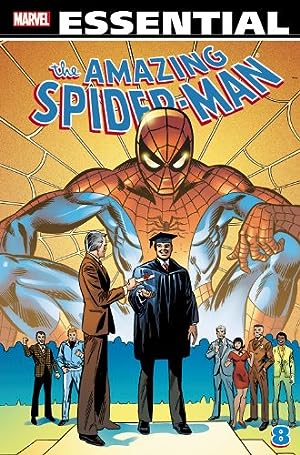 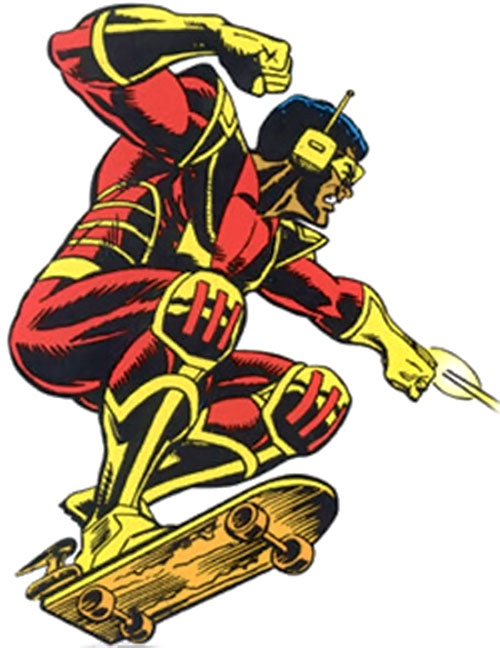 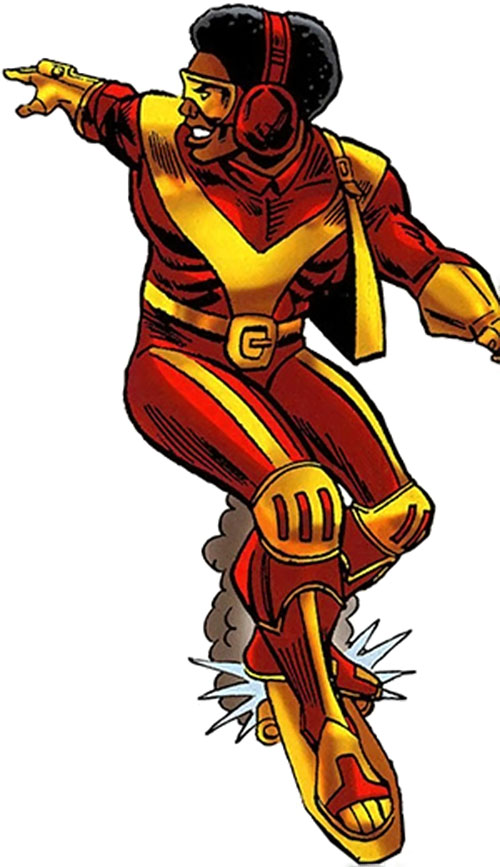 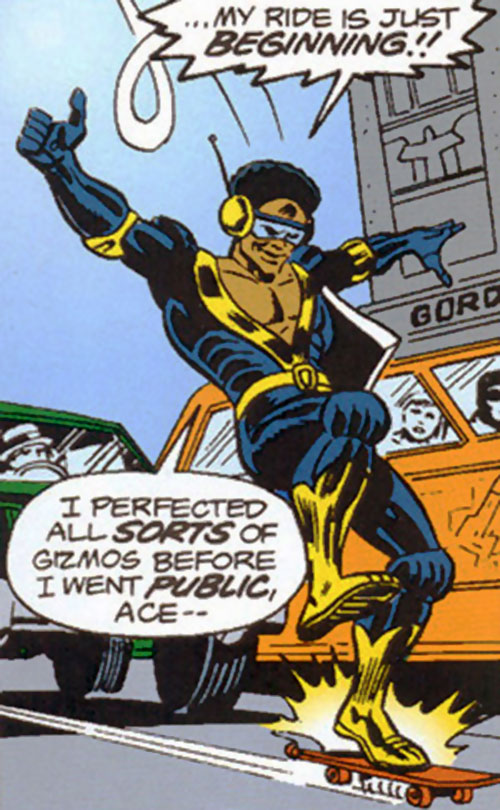