Rocketman is a living rocket, and the fastest man in the world. He can fly at more than 1,000 mph, and become a mass of flames.

His biology has also hardened to resist the vacuum for a while and is highly resistant to radiation.

The Touch Down, Kittin’s one-man experimental spaceship, traveled to Mars (35 APs) in 5 weeks. As his powers became public, he was conceded use of the ship whenever he needs it, although in the meantime it is stored at Cape Canaveral in a dedicated hangar.

Roger Kittin, the first man that traveled solo to Mars. Kittin, a man who accepted the most dangerous mission into space ever carried, and put it to complete success. And, since he came back, Rocketman the mutant.

Mars changed Kittin. It changed him to the DNA helix: an astronaut on the travel to Mars, he was a living Rocketman when he came back.

His space suit wasn’t correctly sealed. The air supply on the suit ended after two days, during a walk longer than thought. Luckily Roger had developed a super-efficient use of air and he only discovered that air was long over after he returned to the ship.

On the sixth day Mars’ cold pierced through the suit and Roger developed a superheated sheet over his skin as a response. And finally one of the starting engines of the spaceship broke and he supplied it by pushing… discovering that he could fly at fantastic speeds.

The journey back was tougher for him than the one to Mars. Now he knew he had changed, suspected that he was no more human, and doubted how the authorities would take his newfound abilities, that he had until the moment successfully hidden from them. Perhaps it was all something about Mars…

But it was not: on Earth Kittin kept his superpowers and exposed them to his bosses, the press and his wife in the press conference following his arrival. That way he made sure he would not be easily disposed of if considered a menace.

That called the attention not only of the media but also of a powerful entity who introduced itself as “The Dark Side of the Moon”. It wanted Rocketman to join his party of superbeings to enforce (and rewrite) Law and Order.

Kittin saw through the evil intentions of “New Moon” (as he called it) and with the support of The Trooper turned him away. The Trooper then offered Rocketman to join another team with a completely different agenda: to serve, protect and defend humanity against the menaces of the new millennium and discover the extent of the old prophecies that talked of music and wonder.

To this day, Rocketman is a faithful agent of the Melomen.

Tall, well built, handsome and exotically red-haired, Kittin has eyes just for his wife, but many women around the world sigh for him.

He wears a dark blue padded jumpsuit with the logo of NASA: he’s learned to project his flames over it, so he doesn’t need to have it flame-proof.

Kittin is a simple man with great talent for making things fly. He’s calm and suave, and thinks for a long time before giving his opinion on anything. He’s been alone in Mars, he’s been mutated by the planet and has fought a dark entity of immense power: now there’s little that can befuddle him.

And, as he uses to say when asked about the final reason of his powers: “all this science I don’t understand… It’s just my job five days a week”.

“It’s gonna be a long, long time till ’Touch Down’ brings me round again to find I’m not the man they think I am at home…”

“Mars ain’t the kind of place to raise your kids. In fact it’s cold as hell” 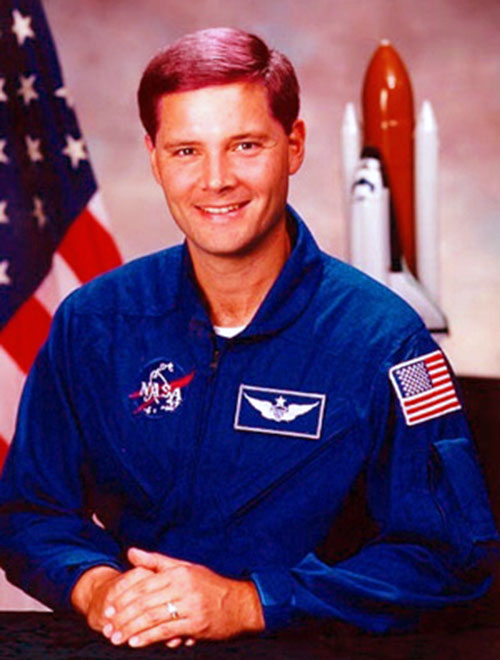