Roga Danar is one of several volunteer soldiers who underwent a highly advanced and complex medical procedure to turn him and others into super soldiers.

He has been conditioned to become a fearless master soldier. The experiments enhanced Roga Danar’s physical and mental abilities as well as introducing chemicals into his body which renders him invisible to virtually all sensors.

With these new abilities and the intense training he received Roga Danar served in many campaigns bringing victory and honor to the Argosian military.

From Troi and Crusher’s report

Dr. Crusher: “At Troi’s request I examined him. His cell structure has been significantly altered. They used a combination of cryptobiolin, triclenidil, macrospentol and a few things I can’t even recognize.”
Riker: “Was he a prisoner of war ? Who did this to him ?”
Troi: “His own government. He’s been programmed to be the perfect soldier. He can be absolutely normal, but when a danger is perceived, the programming clicks in and takes over. Memory, strength, intelligence, reflexes, all become enhanced. He’s conditioned to survive at any cost.”
Dr. Crusher: “One of the new substances in his cellular structure even shields electrical impulses.”
Data: “Perhaps that would explain why our sensors did not detect him.”

Roga Danar was strong and fast enough to not only engage multiple security officers, Commander Riker and Lt. Worf, but also take at least two direct hits from a phaser (set on stun) with minimal effect. He was able to close the distance between himself and a security officer guarding an entranceway of a hallway in just a few seconds and incapacitate him.

Roga Danar was also able to incapacitate the entire on duty engineering staff and Commander LaForge while using his advanced computer skills to re-route internal sensors and disable other ship functions.

Roga Danar was an Argosian prisoner and former two-time Subahdar in the Argosian military.

During the Tarsian War of the mid-24th century, Danar volunteered for service in his planet’s military. Like many other Argosian soldiers, he was subsequently subjected to intense physical and psychological conditioning and chemical manipulation.

The effect of this was to cause his mental and physical abilities to become enhanced when danger was perceived. It also prevented his life signs from being detected through conventional means.

After the war, Danar and the other soldiers attempted to integrate back into Argosian society. With no attempt to reverse their conditioning, the soldiers quickly became violent at the slightest provocation. A referendum over their future was held, and they were subsequently relocated to the penal settlement Lunar V where they were well fed and comfortable, but unable to leave.

In 2366, Danar attempted to escape from Lunar V, and killed three guards in doing so. The USS Enterprise-D was in orbit as the Argosians were petitioning for entry into the United Federation of Planets. Danar proved incredibly difficult to capture and demonstrated extreme cunning and tactical ability, confounding even the crew of the Enterprise-D.

He was eventually outsmarted by Commander Data, but when he was transported aboard it took Commander Riker, Lieutenant Worf, Chief O’Brien, and two security officers to restrain him.

While in custody, Counsellor Deanna Troi discovered the truth about his imprisonment. As the Argosians attempted to take him back into their custody he escaped once again, apparently doing the impossible feat of shattering a transporter beam, and then outsmarted the Enterprise-D’s crew and captured the prison transport sent to recover him.

Danar demonstrated above normal abilities in tactics and strategy, and his performance was rated as “exceptional” in all hand to hand fighting techniques.

Danar’s training officer, Primeahdar Cragweis, reported that on 5 separate occasions, Danar was reprimanded for minor infractions of the military conduct code, for incidents involving brawls with fellow soldiers. In one incident Danar was reported to have severely injured trainee Derwarn, although no formal charges were filed against either individual.

Roga Danar completed primary and extended combat training with Group Kikimorr and was subsequently assigned to his first tour of duty.

Roga Danar’s first assignment was guard duty at the Kevscotti Military Base, where his performance was rated “acceptable” by commanding officer Primeahdar Chritezbr. Danar was subsequently transferred to guard duty at the Sarpaul Transport Complex, where he was twice reprimanded for brawling with fellow soldiers, although he committed no other infractions against regulations.

Roga Danar was promoted to the rank of Third Ahdar during his tour of duty at Janlee. His commanding office, Marjmaci, noted his exceptional ferocity in hand-to-hand combat during infantry maneuvers. Primeahdar Erbrun and Marvhild recommended Danar for early promotion to Subahdar because of his performance at Dylhuc and Jongrl.

Upon completion Danar was assigned to the Philibus Infantry Group, where he served honorably at the Roglay Outpost. Following the outbreak of the Rombeymur Rebellion at Dantang, Danar was transferred to Anabar Squadron at Hilgroen for the duration of the campaign, during which he was injured twice. (TNG: “The Hunted”)

A tall, well-built humanoid male with blue eyes and dark brown hair with grey streaks. When he was captured by the Enterprise crew he was still wearing his grey prison inmate uniform from the Lunar V penal colony.

Roga: “The man I was is still inside me, but this conditioning has been imposed. Woven together with my thoughts and my feelings and my responses. How do you separate the program from the man ?”
Data: “Without further analysis of your condition from Counsellor Troi or Doctor Crusher, I cannot say. But I believe it is possible.”
Roga: “Yeah, doctors ! The Argosian doctors did this to me. If it could be undone, wouldn’t they undo it ?”
Data: “I cannot answer that.”
Roga: “Nor can I, yet I ask myself that question every moment of every day.”

Roga: “My improved reflexes have allowed me to kill 84 times. And my improved memory allows me to remember each of those 84 faces. Can you imagine what that feels like ?”
Data: “I am incapable of any feeling.”
Roga: “Well, then I envy you.”

Worf: “Danar ! You are cunning. You must have Klingon blood. But the battle is over.”
Danar: “My battle is never over.”

The Star Trek characters are better suited in their own setting, but could possibly be worked into any of the futuristic DC settings such as the Legion of Super-Heroes or an alternate future.

I don’t know if this still applied in the New52 continuity, but at one point during the Giffen/Bierbaum run on LSH Ultra Boy was sent back in time several millenia and came across circumstantial evidence that the Khund were not warriors until the Dominators intervened with social and possibly genetic engineering.

The Dominators could have been covertly assisting the Argosians in a similar endeavor if one is using a combined ST/DCU setting.

As a possible Star Trek storyline, I wonder if the Argosian supersoldiers were asked to resume active duty during the Dominion War, pitting one group of genetically-engineered fighters with an ability to avoid sensor detection against another.

Connections:
His fellow soldiers and inmates at the Lunar V penal colony (Low).

Source of Character: Star Trek: The Next Generation (Season 3 episode 11 “The Hunted”). Roga Danar was played by actor Jeff McCarthy. 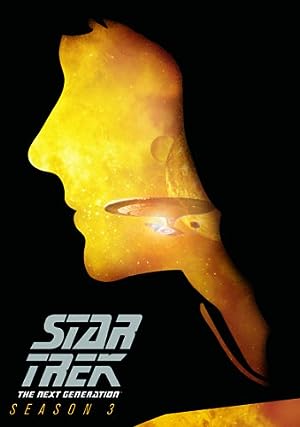 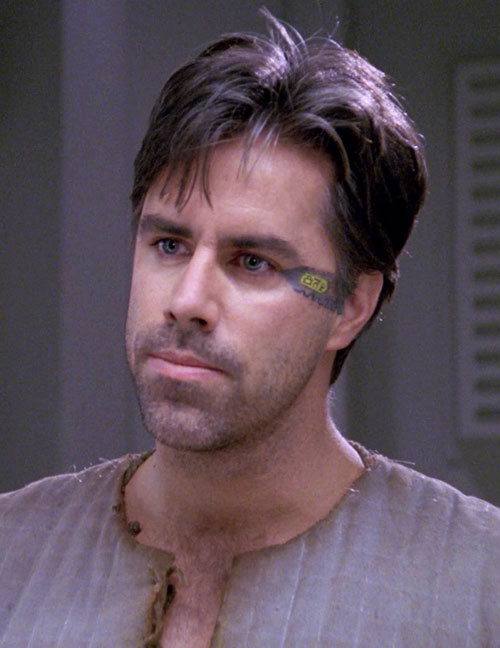 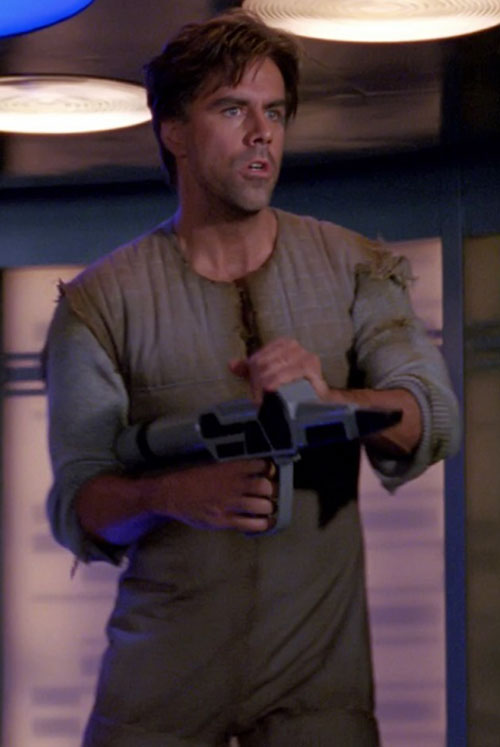