Rogue is a mutant who can absorb others’ memories and abilities through physical contact. In battle with the original Ms. Marvel, Rogue assimilated the heroine’s powers permanently. These were invulnerability, super-strength and the ability to fly.

Rogue’s powers then mutated when she absorbed the attributes and memories of a telepathic alien.

Now, her abilities are far more uncontrollable, with the talents of all those she has touched fighting to be released. She now has the ability to manifest any power she has in the past absorbed… which includes many of Marvel’s heavy hitters.

She has routinely manifested superspeed abilities and Wolverine’s bone claws, but most of the other abilities she could use are untrustworthy so she does not use them.

She does not have the ability to manifest other personas or memories becasue those were all erased when she passed through the Siege Perilous. Theoretically she could manifest those she has absorbed since then.

Rogue grew up in Caldecott County, near the banks of the Mississippi River. In the throes of adolescent passion, Rogue kissed a boy named Cody Robbins and caused him to lose consciousness. Unable to shut out his memories, she fled.

Rogue was discovered soon afterwards by the sinister shapeshifter known as Mystique, who recognized the young girl’s abilities and adopted her as a daughter. Rogue lived with Mystique and her companion — the blind mutant seer called Destiny — for several years.

She engaging in terrorist activities as a member of the Brotherhood of Evil Mutants. Rogue still considers Mystique to be her “true” mother.

When the others members of the Brotherhood were incarcerated, Rogue ambushed the original Ms. Marvel to steal her powers so she could free her teammates from prison. But the plan went horribly awry. Rogue absorbed all of the heroine’s abilities permanently and assimilated Carol Danvers’ psyche.

Unable to purge Danvers’ memories, and increasingly unable to handle the strain, Rogue sought the help of the telepathic, telekinetic Professor Charles Xavier — founder of the X-Men, an outlaw team of mutant heroes.

Xavier determined that the only way to help Rogue was to make her a member of the X-Men, but the rest of the team refused to accept her. After being reminded that Rogue would not be the only one among their number with a checkered past, the X-Men grudgingly accepted her into their ranks.

Rogue served with the X-Men through some of their darkest times, such as the Mutant Massacre, Fall of the Mutants, and the Inferno. Rogue was inadvertently swept into the mystic portal known as the Siege Perilous while saving Senator Robert Kelley, a major anti-mutant proponent.

She was apparently reborn separated from the Danvers persona, which was born into a body of its own.

Danvers, prodded on by the Shadow King, discovered that there was only enough life force for one of the bodies to continue to exist. She found Rogue in the Savage Land and tried to kill her to reserve the shared lifeforce for herself.

Rogue was saved when Magneto, working again from his Antarctic base, killed Danvers. Rogue thus still posesses Danver’s powers, but the persona is gone. 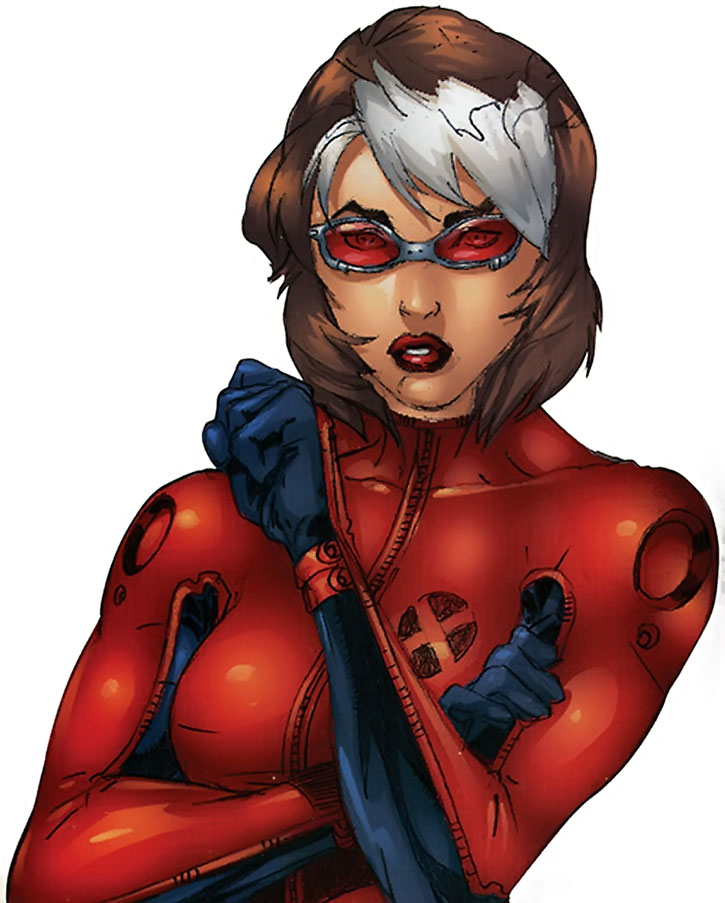 Confused after her separation from Danvers, she was attracted to the Magneto. For a time, Rogue stayed with the Master of Magnetism at his fortress in the Savage Land, a prehistoric tropical jungle existing on the Antarctic continent.

However, she saw through Magneto’s noble façade when he killed the high priestess Zaladane, who had amassed an army of Savage Land natives.

Rogue’s perception of her potential lover shaken, she returned to the X-Mansion. After rejoining the team, Rogue fell for the mutant thief called Gambit; and the feeling was mutual.

But after sharing a forbidden kiss, Rogue learned Remy LeBeau’s dark secret: He had aided and abetted the massacre of the Morlocks, an underground community of mutant outcasts.

At Rogue’s request, the X-Men left Gambit to fend for himself in the frozen wasteland of Antarctica. Eventually, he rejoined the team and reconciled with Rogue.

When the Galactic Council transformed Earth into a maximum-security penal colony for hundreds of extraterrestrial criminals, Rogue absorbed the attributes of Z‘Cann — a telepathic alien shapeshifter who had joined Cadre K, Xavier’s Skrull equivalent to the X-Men.

But Z‘Cann used her telepathy to amplify Rogue’s capacity to assimilate memories, causing her powers to mutate. Rogue suddenly manifested an ability to choose to use any power she had previously absorbed. But those abilities were wild talents, sometimes manifesting seemingly at random.

While still coping with her evolved abilities, Rogue and several of her teammates left the safety of the X-Mansion to search for Destiny’s missing diaries, which map out human history.

A classic Southern beauty, Rogue has been known to turn heads…and break hearts. She is 5’ 8” and 120 lbs. She has green eyes and auburn brown hair with a distinctive white streak.

Her current costume is black with red highlights on the arms, black jacket, red ballistic cloth breastplate, thigh-high boots, and Gargoyle sunglasses. She still covers herself completely to avoid touching others. 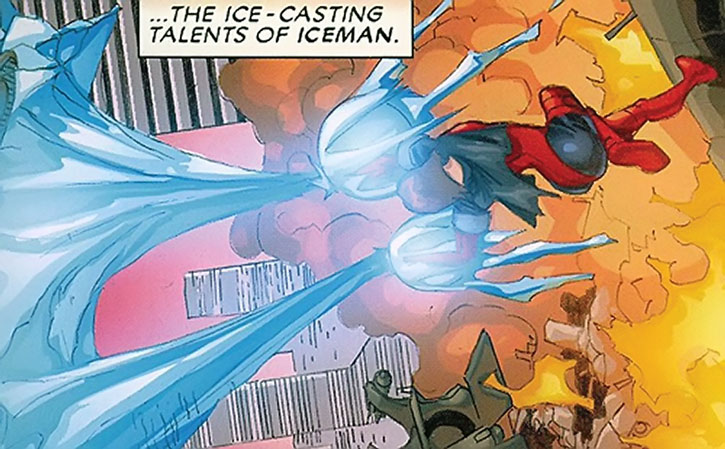 She’s a 20-something young woman with a strong romantic streak. Where once she was quite naive, she’s had enough bad experience that she’s become somewhat cynical. She has a more distinct tendency to get mean when the chips are down.

She still avoids using her Absorption power, but her conmbat style has evolved to include a fair dose of strategy. Her brief time as leader of one of the X-Teams has toughened her outlook.

She still tends to act as a flying brick, but now makes judicious use of her other abilites as she learns to control them.

Rogue is a popular character in the MU, and her translation into DCU is not real obvious. Refer to Kansas Jim’s mutant history.

I saw and see no reason to monkey with Seb’s original mechanics as re: Rogue’s power drain, except where they seemed to be a little fuzzy.

Rogue always replaces abilities that are higher than her own, whether she wishes to or not, Mind Probe does not take up a dice action, and Rogue can try to retain control of her Body using a Contest of Wills.

“Classic” Rogue has no Omni-Power, No Superspeed or Claws, Dex 06, Int/Will one AP lower, and Spi 05.

By Pufnstuff based on Sébastien Andrivet (v1). 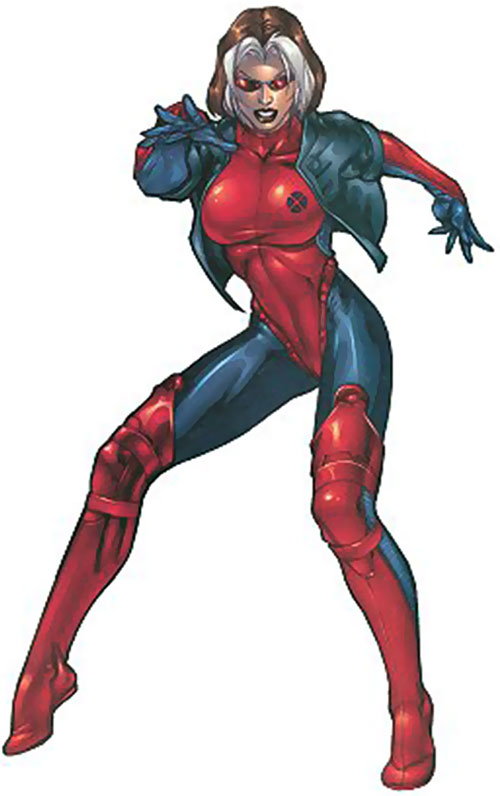 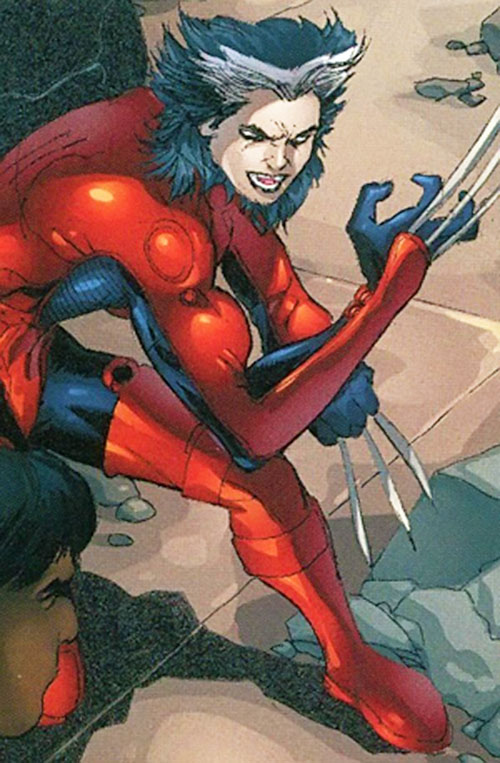 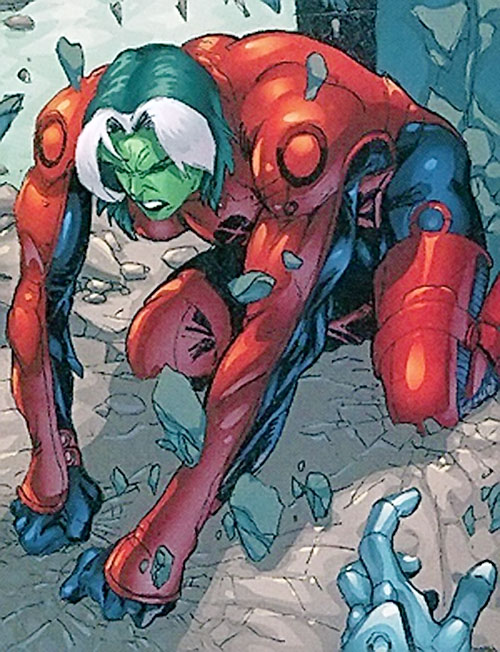 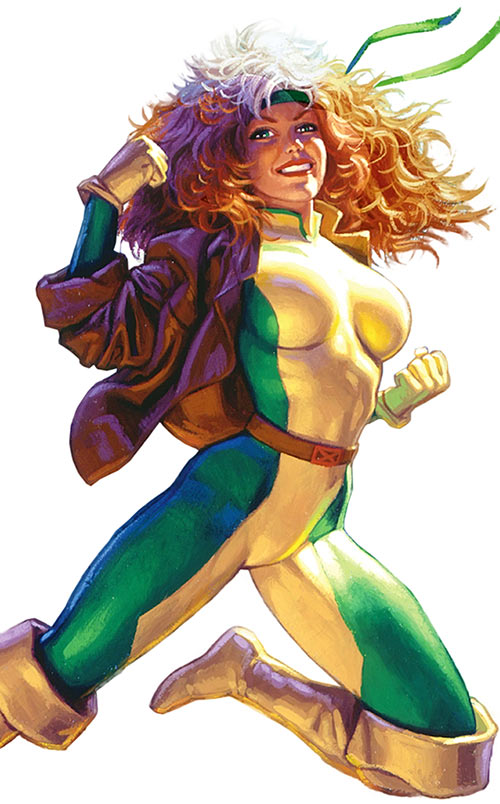 1993 Rogue by the Hildebrandt brothers. Click on the image for a larger version. 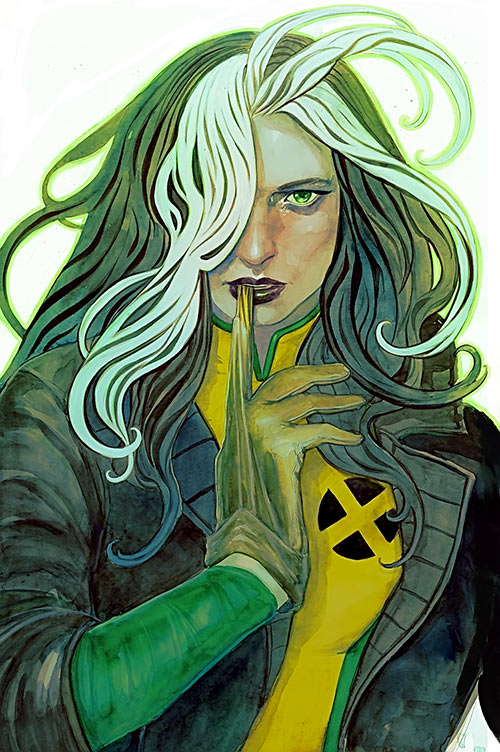 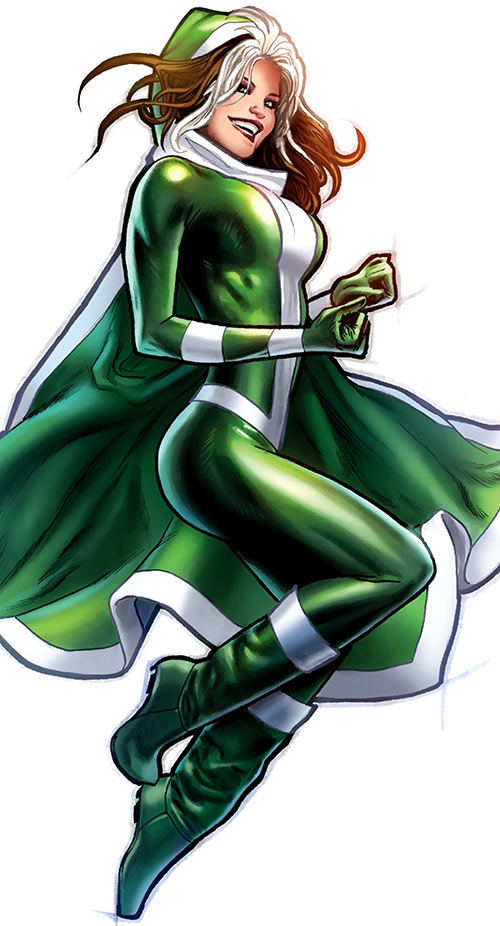