Roland is a hardened, veteran soldier and NCO.

He has some sort of Special Forces training. For instance, he could climb a huge cliff, then storm the fortified building atop.

Roland can use New-You digistruction/resurrection/cloning stations without hindrance. He also has a special pass to use the Catch-A-Ride vehicular digistruction stations.

Roland has a naturally soothing, calm presence. The effects are weirdly marked on individuals with psychological trauma. Roland being around makes them feel much better. It also works well on desperate persons. 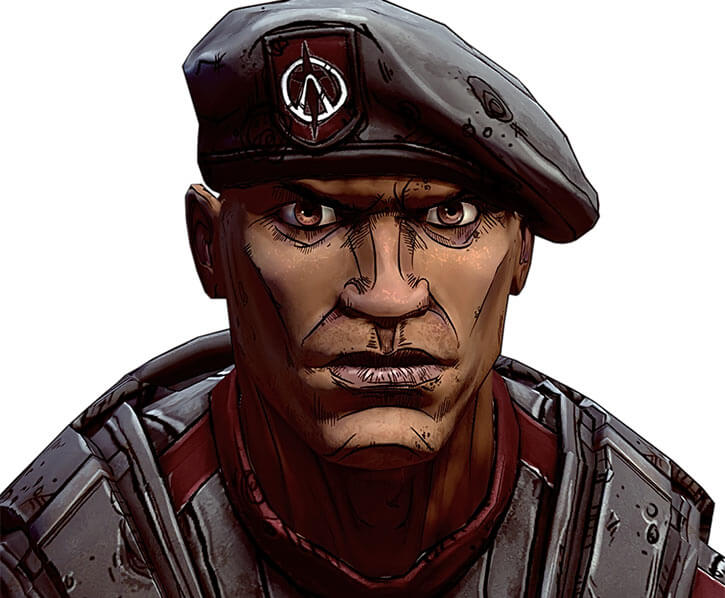 (This is a typical selection for a high-level Roland using the Shock Trooper COM. But there are other character and equipment builds, of course.)

At medium ranges, Roland uses a scoped electrical Cobra battle rifle. This range of small arms specialises in accurate bursts. It is an evergreen model from Tediore, back from before they pivoted toward budget weapons. Roland modifies his Cobras for higher rate of fire, and five-round bursts rather than three-round bursts.

His backup weapon is a Maliwan Firehawk incendiary pistol.

(The Bulldog and the Firehawk are further described in our Borderlands setting article part #2, being legendary rarity weapons.)

Lightning grenades and a large bayonet, wielded as a knife, round all of that up.

And of course, there’s his Scorpio turret. 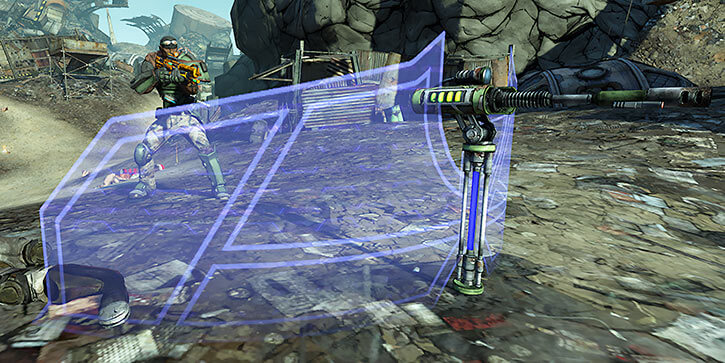 At first sight, the Scorpio could be mistaken for a folded entrenching tool. But it can be thrown to the ground to deploy as a tripod-mounted squad automatic weapon with two “wings” of force.

These force structures are a sort of gun shield. Two nearby infantrymen could use these as cover (one on each side of the turret).

Presumably, the force shields are Eridian tech. And the Scorpio seems to be a digistruction terminal. It’s markedly bigger when deployed than when folded, so most of the parts (and the ammunition) presumably gets digistructed in.

Its core roles are :

This specific Scorpio has a number of enhancements and extensions to its digistruction unit. These additional party favours are :

The supplies come in disposable plastic bandoleers, with the pouches colour-coded and adorned with big icons.

The Scorpio can also generate its own replacement parts. The digistruction unit is well armoured, but the other parts can be destroyed. Especially if hit by a rocket or some such.

(Here, I’m adding a bit of detail that isn’t in the game. To rationalise the video game logicStuff that only makes sense within a video game. A turret makes sense in such a game, but when you start thinking about it it’s complicated – as we also saw with Sahara Jackson.) 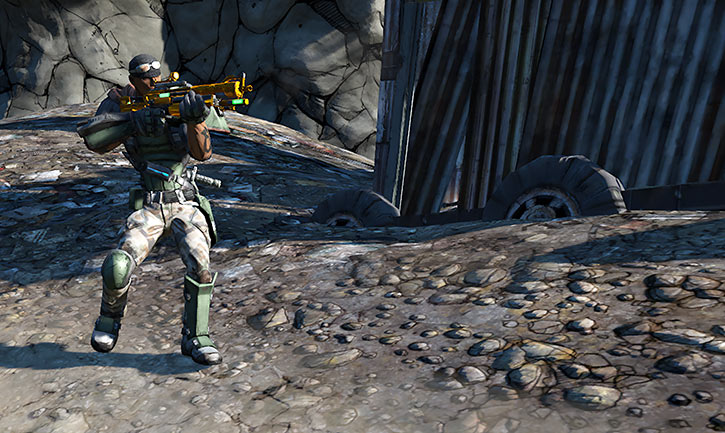 First thing that comes to mind is Soldier, by the late Calvin Russell. Though yes, I already used it once, for a low-profile original sample character.

This Texan blues musician, semi-hobo and ne’er-do-well unexpectedly met with success in France. But despite the quality of his music, he never did big numbers in the US.

Roland is reportedly from Promethea. Once the HQ of the Atlas Corporation, this almost-entirely-urbanised planet was left to rot by its erstwhile benefactor. Lives on Promethea are harsh, lawless, brutal and short.

(From this point on this History section uses information from a Borderlands comic book published by IDW. How canon it is unclear).

Roland was a Sergeant among the Crimson Lance, the Atlas Corporation’s dreaded military arm. He was admired by the troops for his exploits in the field.

He had extensive low-level contacts allowing him to massage regulations. For instance, past demerits for soldiers he liked working with tended to disappear from their file.

While garrisoned on Pandora, Roland discovered that Higgins, the junior executive overseeing his unit, had been embezzling money. Furthermore, Higgins was planning to frame Roland and his squad.

Roland had no way to report up. Furthermore, Higgins quickly discovered that the sergeant knew something. The suit ordered Roland and his three soldiers to patrol a crater, then laid an ambush for them.

The heroic sergeant was the patrol’s sole survivor. He then apparently killed Higgins to avenge his squaddies. 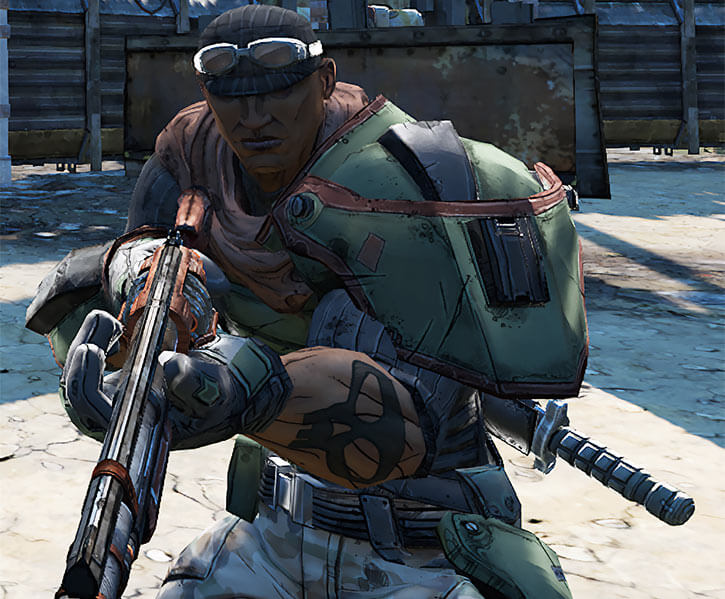 Forced to desert, Roland was stuck on Pandora. Though the planet was practically lawless and with little corporate presence, the Crimson Lance still controlled key installations. Such as spaceports.

There are good odds that he was nudged in this direction by Handsome Jack and Angel. They also likely played a role in him meeting three other badass Vault Hunters.

From the comic, it seemed that Lilith started a relationship with Roland early during the events of Borderlands. They broke that off somewhen between BL1 and BL2. 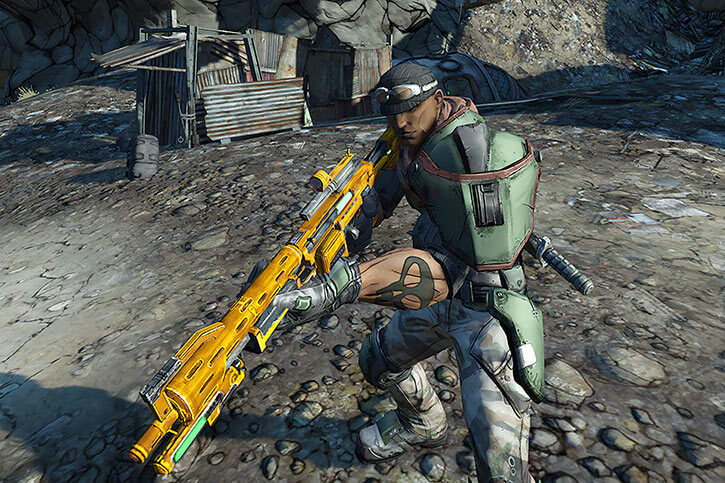 After the Destroyer was slain, Roland seemingly played an important role in New Haven. He and Lilith, plus their friends Brick and Mordecai, secured the area for civilians to live in.

There were undocumented adventures during that time. For instance, Tina said that Roland greatly helped her during “all that buttcrap with General Rancid”.

When Handsome Jack moved in to take over Pandora, he thus paid specific attention toward New Haven. He raided the place with Hyperion assets, including dreaded war cyborg Wilhelm.

Roland was instrumental in taking survivors to a new defensible site — the city/mining ship Sanctuary. He also convinced a number of bandits to join, since the city had something of a stable (if dirt-poor) economy.

But his main success was in convincing abandoned Crimson Lance soldiers to join Sanctuary’s defenders. These had been left behind after Atlas Corporation renounced its presence on Pandora, to cut on repatriation costs.

The bandits, soldiers, Vault Hunters and others formed the Crimson Raiders militia.

Sanctuary could hold against Hyperion thanks to its orb shield. But procuring power cores to keep the shield up was hazardous.

Roland also recruited a new generation of Vault Hunters. Though these were nearly killed by Handsome Jack’s robots, they eventually made it to Sanctuary. 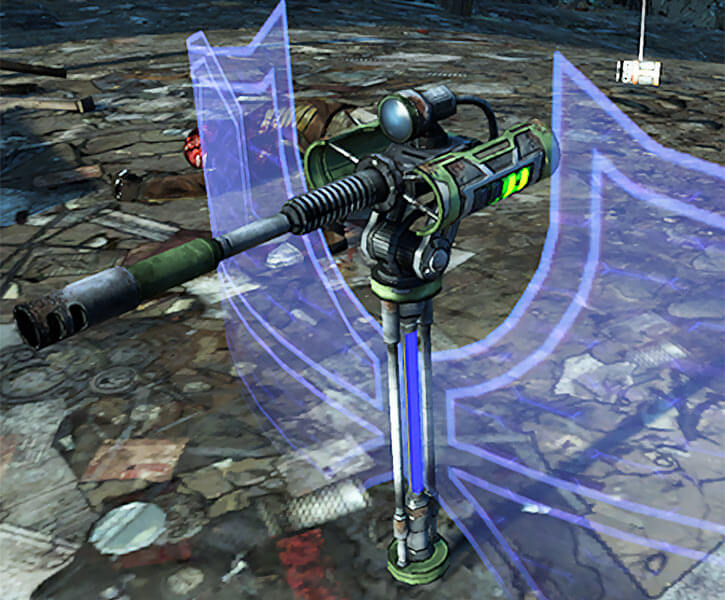 Roland was briefly captured by Bloodshot bandits while in the field. They fell upon him right as he was taking a piss.

But Lilith sent in next-generation Vault Hunters, who freed Roland while Hyperion troops were attacking the Bloodshots to grab him.

From there Sanctuary had its shield sabotaged, only survived by having Lilith phasewalk it away, Roland and the others were again contacted by Angel, etc.. This is all recapped in our “base camp” Borderlands article.

Roland then participated in the assault on Control Core Angel. While the main team stormed it from the main entrance and engaged BNK3R, Roland climbed the cliff at the back of the compound.

This took longer than expected, but he did make his own way into the Core.

It was thus Roland who disconnected the systems force-feeding Eridium to Angel, making it possible for her to die.

While everybody was still catching their breath, Handsome Jack abruptly shot Roland dead from behind – and captured Lilith. 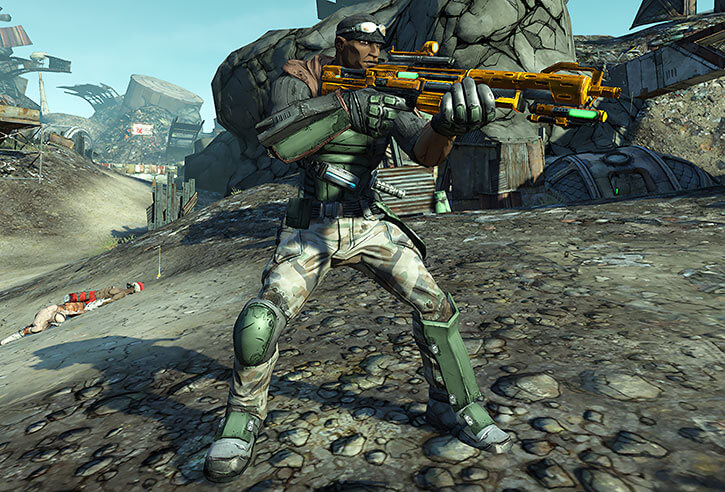 Roland is still wearing some pieces of Crimson Lance combat armour, which I assume is the basis for his Grit skill in Borderlands.

Roland is voiced by Oliver Tull  in BL1, and Markus Lloyd  in the other games. 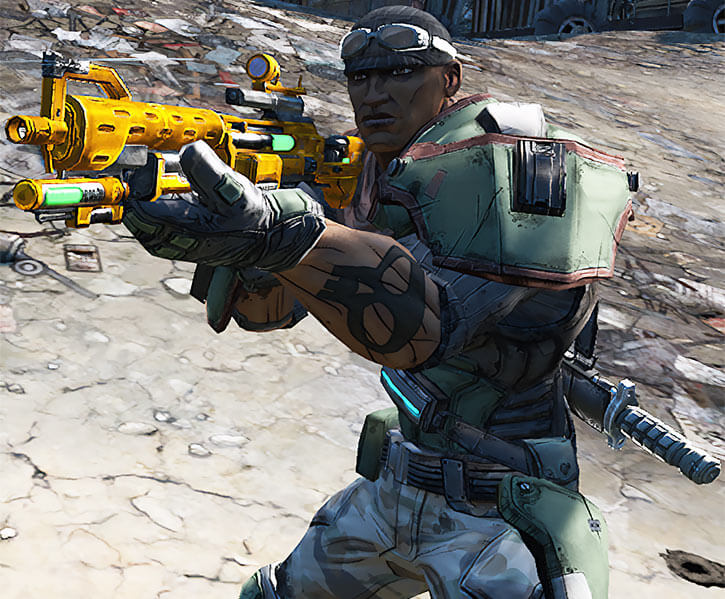 Roland seems to be dour and task-oriented. He prefers to focus on his immediate responsibilities and speak in short sentences.

His squaddies liked him and saw him as a sort of do-gooder and super-hero. They liked making up impossible exploits for their sarge to have accomplished. A typical example would be putting down an insurrection by himself, while only armed with a taco wrapper.

He’s career military all the way, which is obvious in his diction and demeanour. He’s been military for so long that he has forgotten how to interact with people outside of this specific context.

Thus he’s always about missions, objectives, orders and leadership. He doesn’t bother with small talk and niceties unless he’s clearly between missions and waiting for new orders.

During BL1, Roland’s also bad at nuanced interaction. His relationship with Lilith was super-awkward as both lacked the people skills to be a couple.

Roland is reasonably ethical. He has absolutely no problem with killing, likes fighting, and will do things like sacrifice his troops if it is necessary. *But* he’s not a sociopathic, smelly rucksack of porous concrete dicks. That, by Pandoran standards, makes him a shining white knight and paragon of virtue.

After the Destroyer was slain, Roland considerably developed his leadership skills. He could now give pep talks, could better use his ability to soothe troubled persons, could motivate even irregular and uncertain troops, explain his plans, etc..

“Mess with the bull, and you get the horns.” 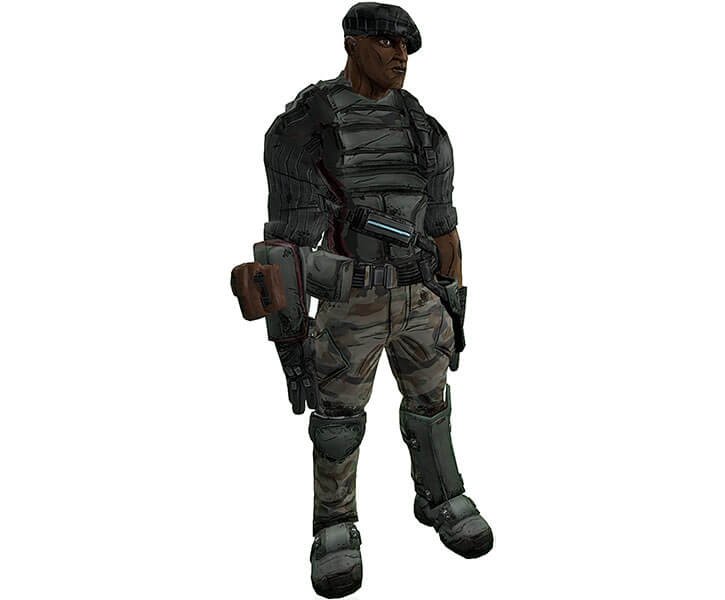 Medicine (Treatment) only for MIN and SPI conditions.

Note that the Scorpio can’t move around once deployed – no DEX.

The Force Shield is applied to anybody taking cover behind the “wings”, though a Trick Shot can bypass it.

The micro-tesseract holds the supplies dispenser, as a slight abstraction for digistruction. It also holds the missile – which is renewed every minute or so.

In BL2, Roland has High Credentials with Sanctuary, and a Rank (Captain).

The Scorpio’s middling AV helps represent how it loses efficacy against high-end enemies.