Rolento is originally from 1989 beat ’em up video game Final Fight. He was a boss there. He later migrated to the Street Fighter series, which turned out to have been set in the same world all along.

Rolento fulfills the role of a good mid-level opposition villain with a military background. He’s perfect if you need someone competent to lead a group of soldiers or he can be stand alone. He’s even got somewhat original competent goons to serve him.

Rolento is a well trained competent soldier. He has competently led his troops into battle on several occasions. It generally takes powerful foes (such as Guy, Cody, and Haggar) to usurp him once he gets a foothold.

Rolento is quite skilled in all military applications. That includes the martial arts, weaponry, vehicles, tactics, leadership, and training other troops. He also smuggled drugs and weapons for the Mad Gear and successfully infiltrated other organizations such as Shadaloo.

Rolento is quite adept at tactics and outright dirty tricks when using his weaponry. He will frequently try to get the full effect out of his weapons by using surprise attacks, blind side attacks, or duping maneuvers to set them up.

A military man who joined Mad Gear, as its ideals fit his goals of a utopian nation. Rolento was stationed in the industrial area of New York City.

Eventually, Guy came to the Industrial section. Rolento saw that Guy looked like a true warrior and asked if Guy wanted to join Mad Gear. But Guy refused, so they fought and Rolento was defeated.

Rolento then seemingly perished when he blew up the industrial complex.

Rolento decided to hang out with the new Mad Gear to see if they were any good. Considering that Haggar and company whooped them, they obviously weren’t.

He was thought to be the boss of the new Mad Gear. However, he surprised Haggar and company when he told them that Retsu was actually his master after they beat him.

Rolento had given up on Mad Gear and decided to start his own army. He laid siege on New York City with tanks! Though apparently that siege didn’t work out very well.

Rolento’s goal was to build the most powerful military nation. He realized he needed powerful allies to strengthen his cause. He remembered a man named Cody, a fighter who was once his enemy. He probably spent SFZ3 looking for Cody.

He ran into Sodom, who was stricken with grief that Rolento had broken off from Mad Gear. Sodom told Rolento that he had lost sight of Mad Gear’s ideals, which I think was an ideal of freedom through chaos. Sodom saw Rolento as being too strict with the military thing and apparently mainly just wanting power and money.

But Rolento told Sodom that he hadn’t lost those ideals and that his path was still conducive to those goals. However, Sodom didn’t believe him.

Rolento finally found Cody. He remembered Cody as a hero, a fighting youth who probably would have been a shoe-in for a Mad Gear member. But when he saw Cody, he was an escaped convict!

Rolento was extremely frustrated that he had searched so hard for a warrior like Cody only to find someone so corrupted. But Cody responded that he was just a loner, not corrupted. Cody then remarked about how Rolento was still playing his stupid military games. Rolento angrily snapped back that it was Cody’s dead spirit that was what reeked of true stupidity.

He then decided after seeing him in jail clothes that Cody wasn’t really top material for his army, and left.

After that, he then looked for Shadaloo’s armaments to equip his army. He heard about the psycho drive, but then heard about how it only worked by brainwashing people.

He eventually realized that this wasn’t conducive to his goals. One couldn’t have a utopia if people couldn’t make their own decisions. When Sodom saw this, he knew that Rolento hadn’t lost sight of Mad Gear’s ideals after all. So he and Rolento made-up and decided to work together towards their true utopia and ideals once again.

Probably still working for his ideal utopia, along with Sodom.

Rolento really has a military bearing. Well, other than the fact that he has horrible posture as he is almost always seen slouched over.

He typically wears a yellow brown uniform with a red beret and brown military boots and black leather fingerless gloves. Rolento also has always carried quite a few weapons on his person.

Rolento is very obviously a military dictator in the making. His ideal utopia is based on his idea that society should be for military men by military men.

Other than the fact that he’s hell bent on establishing this utopia he’s pretty level headed and pretty much fits the military leader role to a T. Rolento is extremely disciplined and constantly barking orders to his troops.

Rolento: “Alright, you ! One step forth !!”
Mercenary: “Yessir !!”
Rolento: “In battle what is essential in order to win ?!? Answer !!!”
Mercenary: “Sir !! In order to win there’s the matter of being non-selective of the means, sir!!”
Rolento: “That’s right ! When the time comes for you to be *excellent troops* it is only matter of battle survivors. More slyness for that sake, it’s essential for distinguishing carefully among whatever the enemy’s plan is ! At the expense of traps and openings, cowardice is the height of stupidity ! Traps and schemes are subtly mankind’s ultimate intelligence, they’re crystallizations of wisdom !”

He could be inserted dang near anywhere. He basically has experience waging war all over the globe so anywhere in the world is fine. He could possibly be a recruit for the Suicide Squad.

Bonuses and Limitations:
Adrenaline Surge works with Jumping and Weaponry.

Rolento usually has at least half a dozen of these guys at his beck and call. 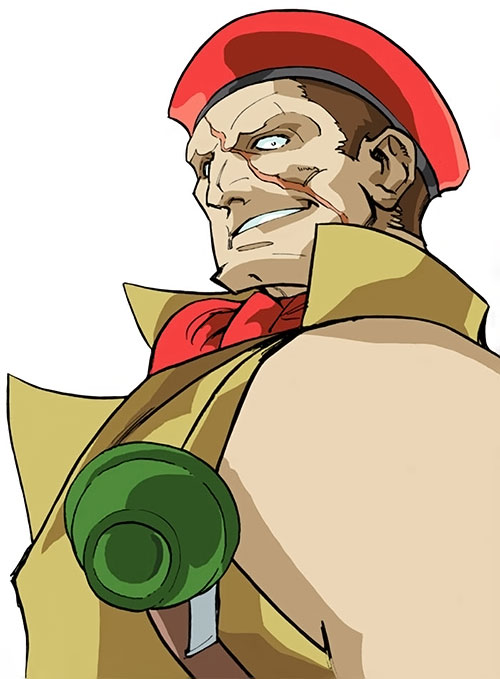 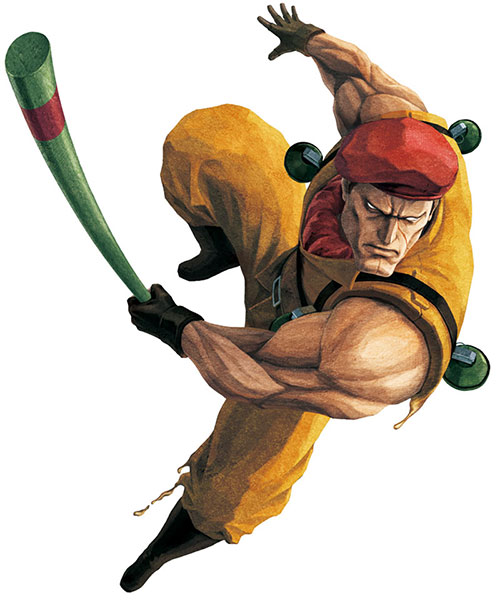