Rom is a full conversion cyborg, with his organic bits deeply melded with very advanced alien technology. This powerful armour/body is superhumanly strong, very difficult to destroy, adapted to harsh conditions (it is meant to operate in deep space and on practically any planet), and makes him immortal.

It can even self-repair, especially if it is aided by an external source (such as an ordinary electrical wall socket). Spaceknights are equipped with built-in rocket pods that allow them to cross enormous distances — even intergalactic ones.

Rom can easily withstand direct hits from 90mm and 105mm tank gun shells and all heavy infantry weapons (such as bazookas and flamethrowers), and can pick up and throw M48 tanks (weighing 45 tonnes apiece) about 20 metres away.

The technology used to make Spaceknights seem quite unlike those used on Earth (to, say, build the Deathlok cyborgs). It seems that the organic bits are actually grafted unto the artificial framework rather than the other way around, and the most important part to be grafted seems to be the DNA of the volunteer.

The metal seems to be in some sense alive and to have some organic properties. In any event it is seamless, self-cleaning and regenerating.

Rom is from the planet Galador, in the Andromeda Galaxy. Two-hundred Earth years ago, Galador was at what is usually regarded as the height of a golden age of peace, prosperity and enlightenment. 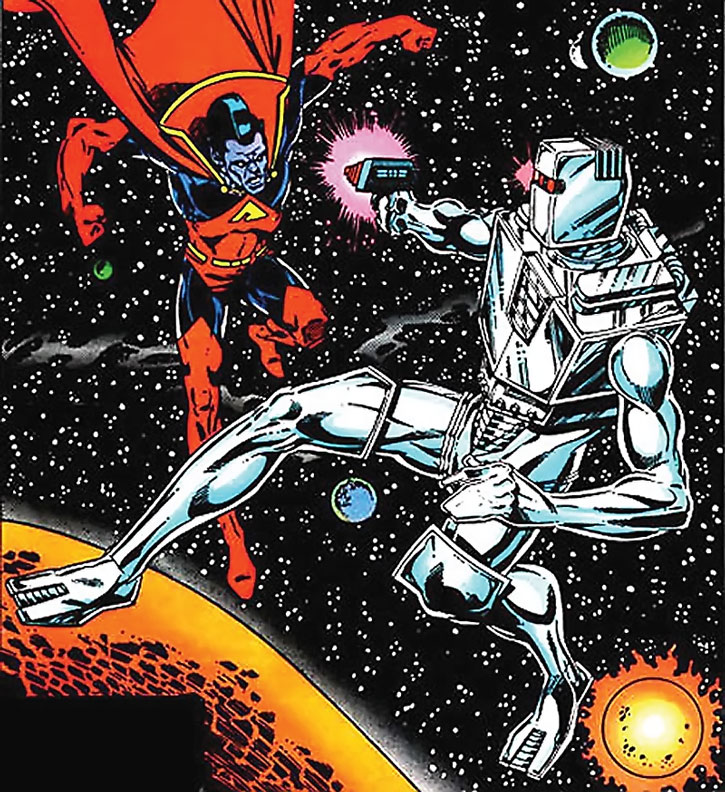 Though this culture had a somewhat Star Trek-ish vibe, it had nothing like a Prime Directive . Galador went on an initiative to bring technology, peace and philosophy to the rest of their galaxy. This was materialised by the golden starships of the Galadorian Armada.

The armada was destroyed and all hands lost, and the locals’s (the Dire Wraiths) counter-strike was launched at Galador. Given the size of the force headed toward their planet, the Galadorians had some forewarning. After centuries of peace, though, their options were limited.

The planetary ruler, the Prime Director, issued a call for volunteers to sacrifice their humanity and be fused with the signature Galadorian tech to become combat-worthy full conversion cyborgs. This was a desperate, drastic measure. The Galadorian culture held respect for life as its highest value, and sacrificing one’s humanity to become a machinelike being was an unspeakable act.

All Galadorians knew it had to be done to have some sort of fighting chance against the attackers. But none dared to take the first step until a young man, Rom, became the first volunteer. He was followed by a million others, and at the end hundreds (including Rom) were approved for the procedure.

Several days later, this cohort of Spaceknights, each equipped with a special weapon suited to its unique fusion of person and machine, flew off to meet the Dire Wraiths. Though they suffered heavy casualties, the Spaceknight’s line held. 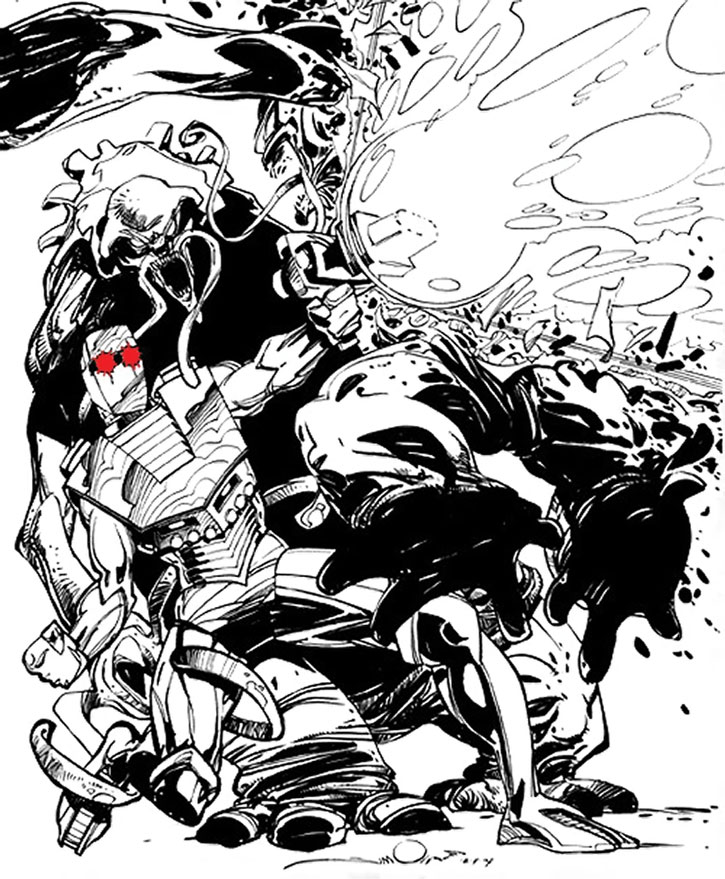 The enemy escalated by having Dire Wraith summoners conjure Deathwing, a demonic shadow creature of great power. Deathwing destroyed dozens of Spaceknights but was eventually driven back by Rom, which cemented the victory of the Galadorians.

Hailed as the greatest of Spaceknights, Rom did not stop there. In his opinion, the Spaceknights’s mission would not truly be over until all Wraiths had been “hunted to the very ends of the galaxy and cast into Limbo.”

Right after this thunderous declaration he flew off and did just that for 200 years. In fact, he even went beyond these objectives since, by late 1979, he was in the Milky Way galaxy and landed on Earth.

When he first appear, Rom is a dour space warrior with an air of weariness and impatience to him. He’s utterly convinced of the moral imperative of his mission and of the evil of the Wraiths (which he has seen first hand for two centuries), and annoyed by obstacles.

He makes lots of formal, melodramatic statements, with what would nowadays be considered a somewhat emo tinge. Apparently, exclamation marks are close allies of the Dire Wraith, as Rom seems determined to use up as many as possible in his lines ! To deny them to the enemy ! See the quotes for examples of this ! Underneath ! 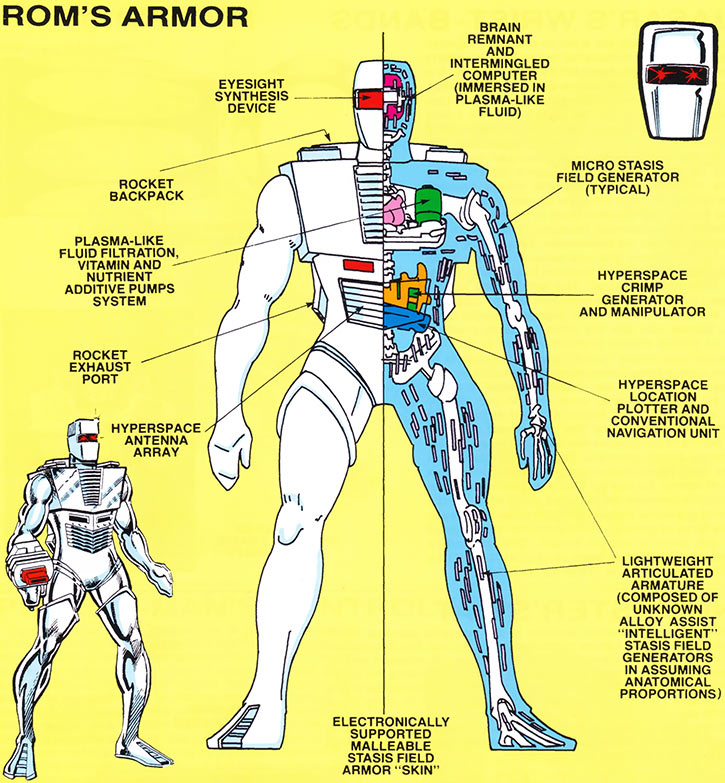 “I, Rom, offer my life to save Galador, Prime Director !”

“Arrgh ! The pain — washing over my circuits and nervous system in waves of fire ! It can only be a Wraith weapon — wielded by a Wraith in human guise !”

“The Earth woman, crying a warning ! She believes the tale I told her ! And in believing, she has saved me from destruction !”

Rom would have worked just as well in the DCU, really – just assume that the Dire Wraiths learned to make themselves undetectable to the standard Green Lantern detection attempt, and come from a different space sector anyway.

Of course, the tone of the story largely depends on the year. By the late 1980s or the 1990s, the eeeeviiilllll government would almost certainly be in league with the aliens rather than being a mostly benign but somewhat clueless bunch.

Advantages:
Iron Nerves, Language (At least one Galadorian tongue), Life Support (all except Sleep), Lightning Reflexes, Near-Immortal. See the “Why We Fight” section for other Advantages.

Connections:
Spaceknights (High). See the “Why We Fight” section for other Connections.

Equipment:
Rom’s stuff is stored into a Tesseract Dimension that is two APs away from Dimension-616. These three pieces of super-tech equipment are:

During much of the time he spent on Earth, Rom suffers from the Mistrust Drawback, due to being a giant killer space alien robot with an impressive body count. This endures throughout the period covered so far.

During his stay on Earth, Rom gradually accumulates some Connections and, eventually, Advantages stemming from those. Those are:

Rom’s Neutraliser (or Neutralizer for those over the pond) is his signature weapon. This weapon can banish targets into another dimension , which the Galadorians call Limbo. This effect seems to be selective.

It definitely works on Dire Wraiths and Spaceknights, but it has been repeatedly stated that humans lacked the constitution to survive the banishment. On them, the effects of the Neutraliser are the vanilla Energy Blast, no matter what the intent of the wielder might be.

How the Neutraliser works on other creatures and sentient is less well-defined, and may surprise even the shooter. XXXXXXXXXX

The Limbo dimension into which the Neutraliser’s targets were banished is thought to be the same Limbo as Immortus and the Space Phantoms (great band name, by the way). However, as with anything pertaining to Immortus, I’d advise great caution.

These Wraiths were observed by the Avengers in murky circumstances, and that they had been banished there by Rom was never stated – it was what the Wasp immediately assumed. These Wraiths were also thoroughly enslaved by Kang and eager to die to escape from his wrath, which felt… odd.

The Limbo to which the Neutraliser was sending Wraiths (whether it was Immortus’s Limbo) seemed fairly close to Dimension-616  (perhaps 2 APs of Travel Distance), but escaping from it was apparently impossible, even for the Dire Wraiths sorcerers, who are known for wielding some potent magics. Presumably the Distance Travel of any journey starting in this Limbo is increased by 13 APs or so.

Whosoever would sacrifice his humanity to save Galador, let him come forward in this, our darkest hour !

Rom experiences fairly important fluctuation of his morale, resolve and endurance, which in game terms correspond to swings in his HPs. The score above should be understood as a median — in practice his HPs total can easily be anywhere between 040 and 080 when he’s encountered.

Source of Character: At this stage, the entry chiefly covers Rom Spaceknight issues 1-24. 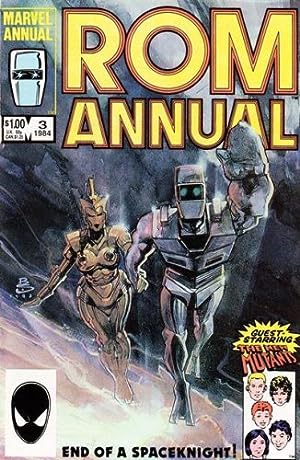 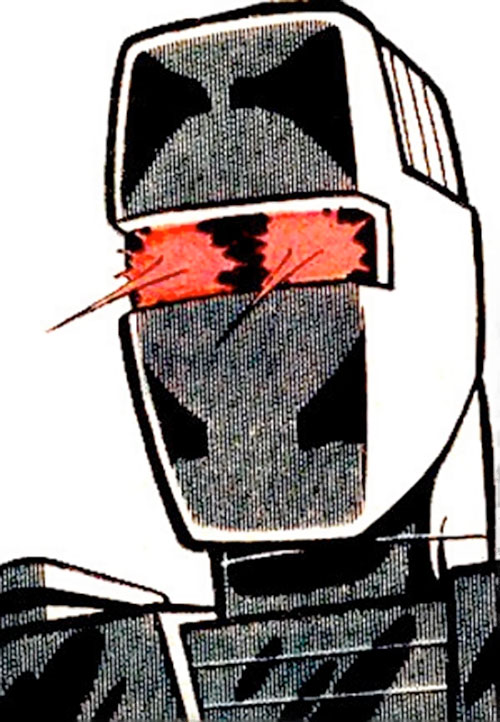 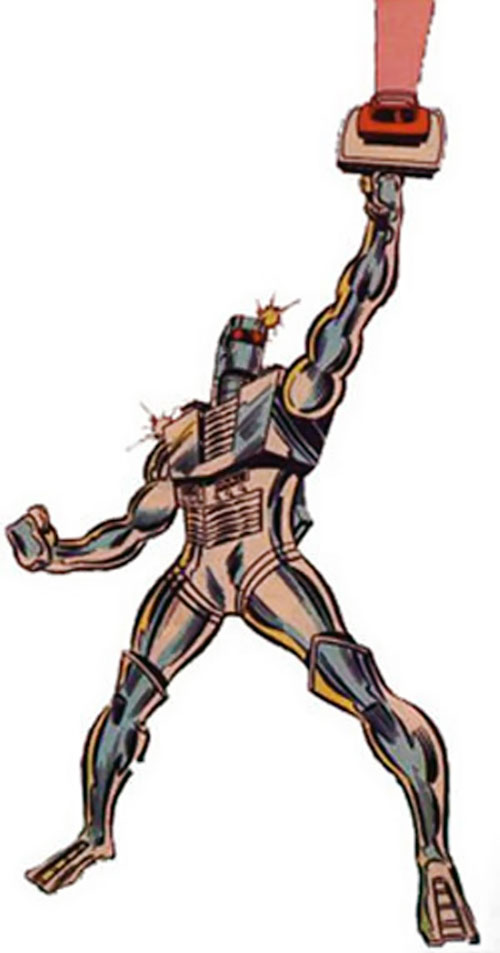 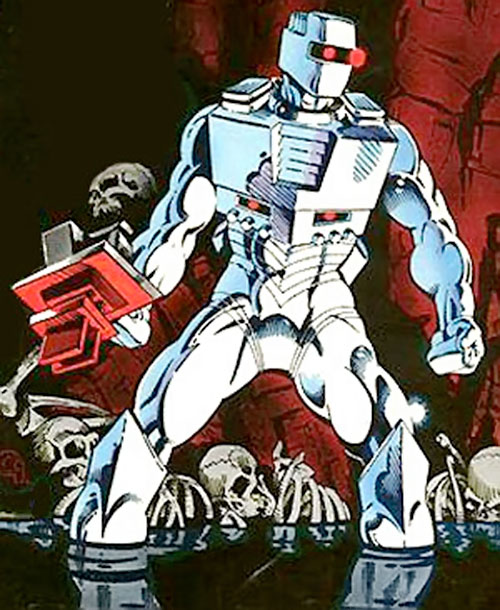 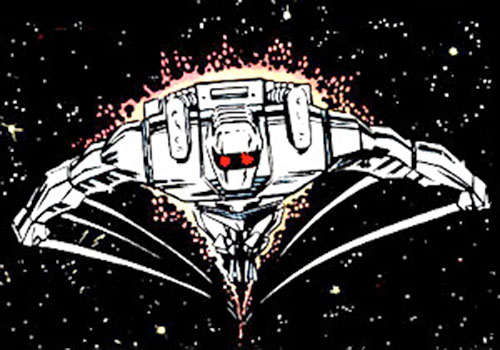 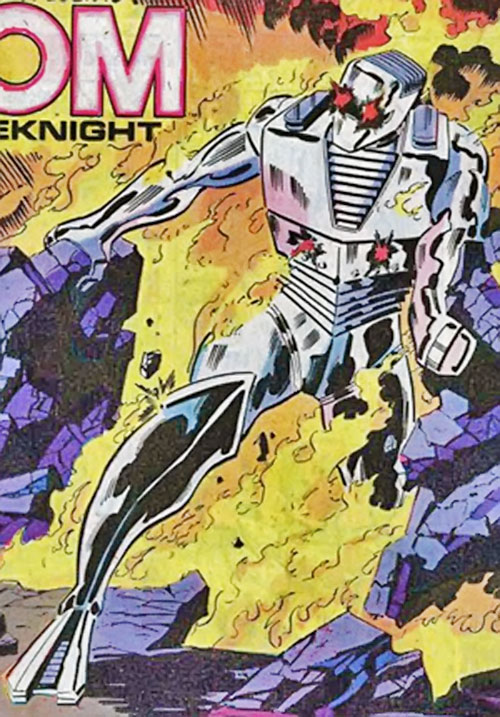