Rose shares a split soul with and embodies all the good left in M. Bison’s soul that he cast away. She’s basically Bison light. As such, she has a lot of similar abilities – but not on the scale that Bison does.

Rose seems to have more of mystical theme going on rather than Bison’s psychic science theme. She seems extremely attuned to what’s going on in the world at large. Most notably, she can accurately predict the future. To top it off she’s also a world class martial artist.

Rose was a mysterious woman who wielded the mystic “Soul Power.” She felt that doomsday was fast approaching. Therefore, she had seal Bison’s power away even at the cost of her life. Rose had dedicated her life to hunting down this man and end his evil ways and misuse of his power.

In Street Fighter Zero 2, she finally tracked Bison down and they fought. Rose won, and thought that she had destroyed Bison for good. But when she came back home and checked her tarot cards, these and her intuition told her that Bison was still alive!

Rose was visited by a guy who told her of his sister. She had been kidnapped by Shadaloo to become the Doll, Aprile. It was probably around then that Rose began to learn about the Doll project and realize what it was about. Searching for Bison, Rose came across a man named Guy who was also opposing Shadaloo.

Guy didn’t like how she was so recklessly jumping into things alone. He told her to stop, but Rose refused. Rose also probably came across Balrog later on and demanded that he tell her Bison’s whereabouts.

Balrog was perplexed. He wondered why Rose would go to her death without a second thought, and didn’t understand Rose nor Bison and why the two would want to battle do like that.

Rose finally hunted down Bison. There he told her that she arrived earlier than expected. He had another appointment (most likely Cammy) and asked for Rose to come back, later. Needless to say, Rose refused. Whereupon Bison sicked one of his Dolls, most likely Aprile, on her. 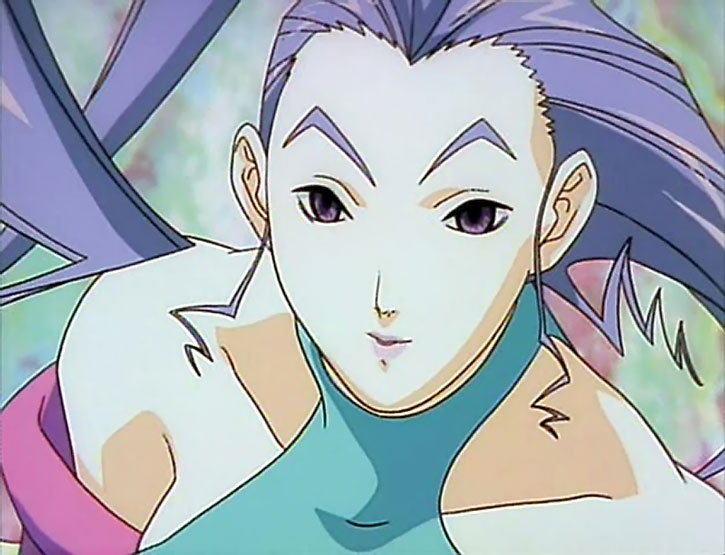 Rose, remembered hearing about Aprile from what her brother told her earlier. She was insulted that Bison would sick a Doll on her and even think that the Doll could win. However, while she at first had the upper hand in the battle, Bison began to turn the battle and dominated her mind.

Laughing, Bison told her that they were two lives that shared the same soul. He then told her that SHE would be the one who would stand victorious when the world of eternal doom came.

Rose realized to her horror what Bison meant. Bison’s other two plans for a new body (Ryu and Cammy) had failed miserably. Therefore, she got to be the unlucky one who finally became Bison’s new body. The two halves of the same soul finally came together again. Bison took over Rose then all turned black.

Guy finally caught up to Rose and found her unconscious. He could sense that there was something wrong with Rose. Eventually, Bison was destroyed by Chun Li, Nash, and Guile. As Guy carried Rose away to the hospital, he realized that Bison was finally dead. The world didn’t need to fear him anymore, but yet, as he held Rose, he felt a sudden chill which he couldn’t explain. 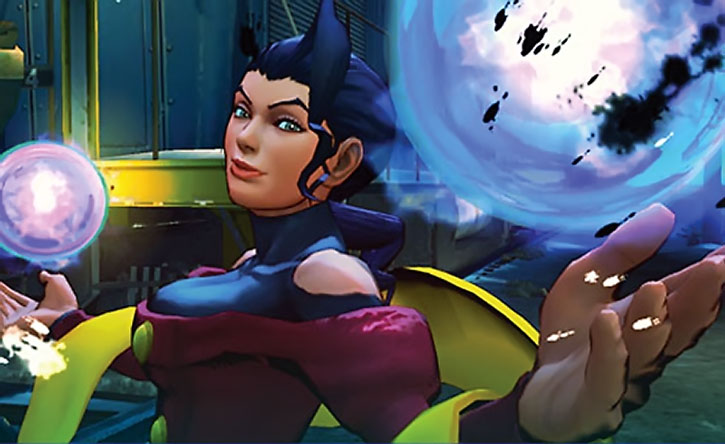 It was confirmed that Bison possessed her at the end of SFZ3. From there Shadaloo constructed a new body for Bison, and what became of Rose’s old body and soul is unknown. Of course, then Gouki in SF2 sent Bison’s soul to hell via the shungokusatsu. Maybe Rose’s went along with it?

Still trying to track down where it could be stated what happened after SFZ3 and the confirmed possession.

Rose appeared and fought in SF4. How she survived and what her objective is is unknown.

Rose is a tall statuesque beautiful Italian woman. She sports violet hair and eyes and an ethereal presence. Her long violet hair is arranged in a pattern of curls and zig zag lightning bolts. 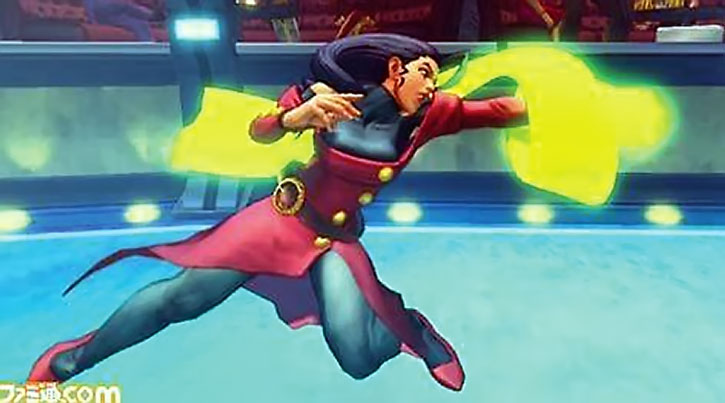 When fighting she wears a light purple dress with large buttons over a tank top and purple hose. She also wears high heels and of course always carries her shawl into battle. When not fighting she tends to wear classy evening gowns and longer dresses.

Rose is an aloof fortune teller with a strong presence and sense of justice. Due to her ability to see the future and perceive what most people don’t she considers it her duty to right wrongs and make the world a better place.

She is determined to stop Bison at all costs due to the connection she feels and due to the fact that he murdered her master. When not out trying to save the world she’s a pretty normal woman who enjoys candle lit bubble baths with a glass of fine wine.

(Rose remembering her master’s words.) “Someday surely, your field of battle will come to turn towards your steps. Do not forget the *soul power* you’ll grip, it is but a powerful weapon, yet also a weakness for it cannot conquer.” 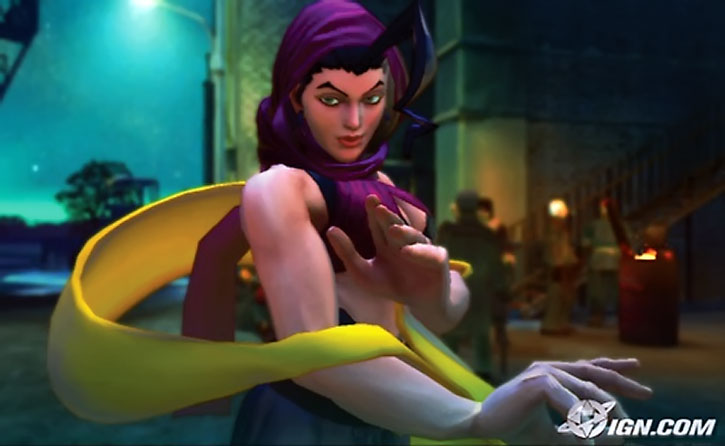 (Facing a bunch of Mafia thugs who’ve just broken into her mansion.)
Rose: “What might your order of business be ?”
Thug: “You met with our boss three days ago, isn’t that right ?”
Rose: “That is correct, he came at me in the avenue in front of this shop. I saw a more than ominous future because of him, a word of warning I give you.”
Thug: “That evening was a serious business discussion for the boss. Were you to cease speaking about that, those dealings on the project from two years go… there would’ve been no reason to stop it !”
Rose: “Are you, the one who led him into it without having known the extent ?”
Thug: “Those who make fools out of us will disappear !” (Pulls out a gun and points it at her.)
Rose: “I told only of fate. Anything you say is useless.” (The candles in the room flair up and Rose seemingly disappears.)
Thug: “H… how in the hell! ?!”
Rose (appearing behind the thugs): “Go back. This is no place for you to come.”

For some reason I think a team up with Zatanna would be particularly cool. Rubbing elbows with other members of the mystical community wouldn’t be out of line either. Doctor Fate is probably another good choice for a team up. She’s likely to be outclassed by someone like Constantine though.

Skills:
Martial Artist: 11, Occultist (all but mentor and create artifact): 06 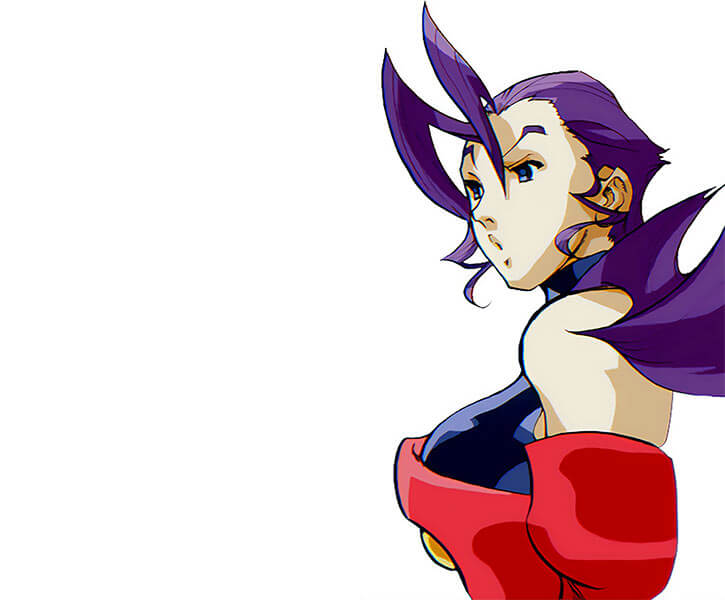 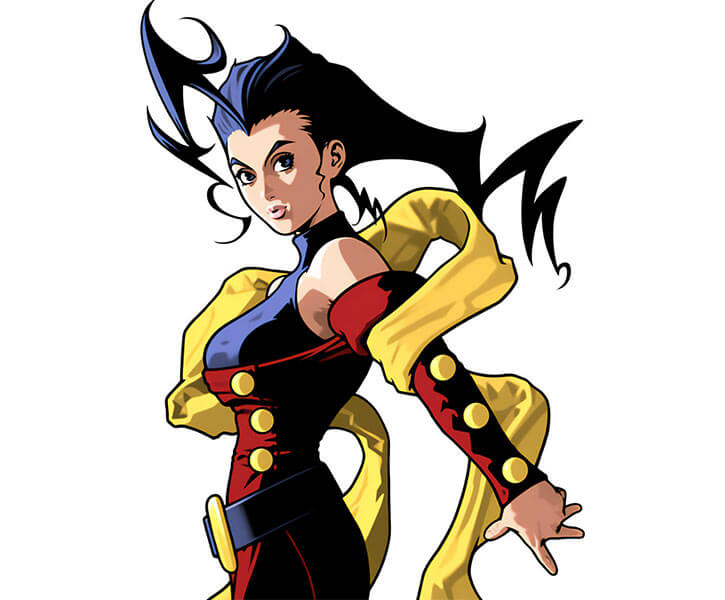 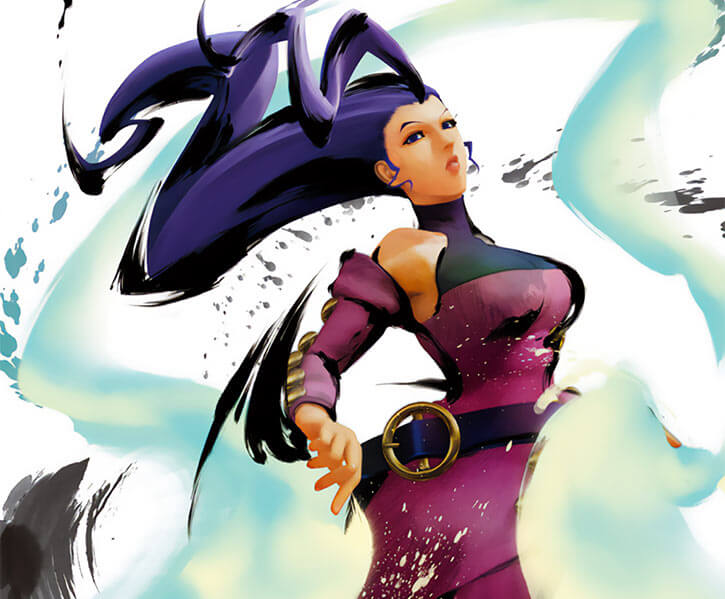