Rosie is a tough-as-nails bar owner, with obvious experience in ending bar brawls in her own two-fisted, hard-nosed way. She can beat up three guys at once if they are causing trouble or don’t want to pay for their drinks. She’s not as robust as one could expect, though – Carol Ferris punched her out in one surprise blow, but I suspect it was a lucky strike.

Rosie has a forceful personality and some personal authority. Her 2004 appearance implies that she is a gifted mechanic, and I’ve assumed in our game stats that she’s also a good driver.

Rosie’s costume is fire-resistant (or at least the gloves are) and she wields an improbable machine pistol that shoots red hot rivets. This ammunition has a small chance of setting fires if it ends up in contact with some particularly flammable substance.

Apparently it is fed by the armoured basket she carries on her hip. Given her tactics and the possible origin of her gear, it is entirely possible this weapon has unlimited ammunition.

She is very handy with her special gun, and seems comfortable with trick shots such as shooting a weapon off the hands of an opponent.

Tremble before the DTs !

Generally speaking, the Demolition Team is not exactly the most competent and fearsome bunch. They have mediocre stats, low Hero Points , very amateurish tactics, no preparation work (except for killing the phone lines) and poor coolness under fire – yet tend to be too confident. They’re a good encounter if you want an easy, campy fight.

They seem pretty good at demolishing buildings and wrecking places, though.

For some years before the Crisis, the Monitor meddled with superhuman activity on Earth from his cloaked satellite. Back then, it seemed as if he was some sort of fixer for costumed criminals, or perhaps a weapons dealer for supervillains. His actual plan, as it later turned out, was to test heroes and to gain favour with some villains for the incoming Crisis on Infinite Earths.

One group of criminals he backed was the Demolition Team. It apparently was the Monitor who recruited and outfitted them. He also seemed to be their main provider of contracts – perhaps their sole one, since he had also arranged to be the sole mean for the team members to reach each other.

The special equipment the DT used might have been bought from an Earth weapons designer. But it is somewhat more probable those were built by the Monitor himself when he had ten seconds to spare.

(This equipment *does* have a distinct tendency to ignore some basic realities of physics, but in the pre-Crisis DCU that’s hardly an indicator of cosmic technology).

The DT received several jobs from the Monitor during this era (roughly 1982-1985, though it may have started earlier). Their first documented contract occurred in 1984. Congressman Jason Bloch called his contact the Monitor to have agents demolish the Ferris Aircraft company while its usual protector, Green Lantern, was away.

The Monitor called Rosie, who gleefully asked him to put her in touch with the rest of the team. They then assembled in Los Angeles to turn Ferris into expensive rubble.

The DT proceeded to wreck much of Ferris Aircraft’s buildings and equipment, but was soon opposed by the Predator. After driving them into foolishly splitting up, the Predator easily defeated them and they were arrested.

The rest of the career of the Demolition Team took place off-pannel . It would seem it involved a series of defeats at the hands of minor opponents. They were once beaten by Automan in Pittsburgh.

They eventually decided to retire, though most (perhaps all) of the team remained friends. At the very least, Rosie and Jackhammer remained close.

Some time after the DTs disbanded, a short-lived villain team called the Toolbox emerged in Metropolis. They had a somewhat similar theme and a member also named Jackhammer. The Toolbox was of course defeated by Superman. Aside from Jackhammer III (Ford Coronado), members included Benchpress and a woman whose first name was Betty.

The second appearance of the Demolition Team, in the pages of Blood Pack (1995), had numerous differences with the first. This may have been intended as a post-Crisis version of the Team (since it was their first post-Crisis on Infinite Earths appearance). If so that didn’t take.

Though this version might be interesting to use, the paucity of material means interested GM will have to pretty design everything by themselves. Furthermore, reconciling this version of the team with their later appearance is difficult. This version of the DTs seems to simply have been forgotten.

Some DTs were seen again in 2004. At this point, their lives seemed in shambles. Jackhammer, missing “the life”, had grown addicted to designer drugs sold by the psychedelic villain Dr. Grass. As for Rosie, her morale was a wreck – the love of her life, Samantha (better known as “Sammi”), finally left her for good. 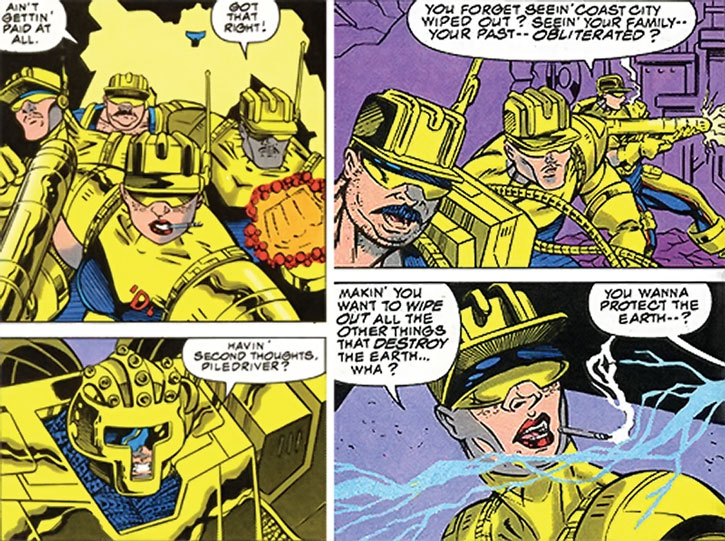 Unable to get over this, she was contemplating suicide when she received a call from somebody from Detroit called the Mechanic, promising her to change her life.

The Mechanic had recruited six persons with either a mechanical nature or an affinity for technology and/or mechanics. Aside from Rosie those were Automan, Brainstorm (Axel Storm), Professor Hamilton, and Doctor Cyber. The sixth was scheduled to be Tin of the Metal Men, but he refused and the Mechanic replaced him with Jackhammer from the Toolbox, to Rosie’s mild annoyance.

All were suffering from severe depression at this point, due to a variety of life accidents and conditions.

The Mechanic wanted to use them as the six “cylinders” that would empower the Enginehead. The Enginehead apparently was a perfect mechanical being who would fix a fatal flaw in reality. The Mechanic had lied to them all as to changing their lives, and just wanted to sacrifice them.

Against all odds the Enginehead was created, though its career was brief and chaotic. Part of Rosie was alive in the Enginehead. She was its heart, giving it feelings and love, and some of the moves and tactics were distinctly hers.

In the end, the Enginehead sacrificed itself to fix the flaw. In so doing it also gave birth to a city of movement, weirdness and innovation in the Arizona desert – Irontown. It is unclear what happened to the spirit of the “cylinders”.

However, the DTs were seen again during the OMAC crisis of 2005. An army of OMAC cyborgs was directed by Brother Eye to kill costumed and/or superhuman operators. The Demolition Team were apparently all brutally killed by one OMAC.

Given previous events it is impossible for Rosie to have been here, and unlikely that Jackhammer was. Our No-Prize Hypothesis  that the old team finally sold off their gear to a new, very short-lived Demolition Team. Perhaps they wrongly assumed that Rosie had committed suicide over her break-up with Samantha, and disbanded in mourning.

During the Final Crisis, a man who seemed to be Hardhat of the DT was seen in a limbo populated by forgotten characters.

Rosie is obviously quite strong (with impressive forearms). She dresses in a butch and practical way, though she also wears mid-sized loop hearings. She has clearly visible freckles, and at least one tattoo (heart with an arrow through it, left forearm).

She chain-smokes cheap cigarillos. One of her habits is to pick up a red-hot rivet from her hip basket to light up.

Rosie is a tough, authoritative, blue collar woman. Like with the rest of the Team, she works chiefly for the pay, but the excitement of wrecking stuff also plays a role. Presumably they feel it’s cathartic to destroy so much property.

Though Rosie makes a lot of noise about the DTs “playin’ for keeps” and being real dangerous experts, she and her crew seem much more interested in mayhem than in killing people. When a Ferris employee attempted to stop the DTs, she just shot a wrench off his hands rather than gun him down.

She seemed puzzled at what those crazy fools were doing. She tried to shoo them away – rather than, say, just slaughtering everyone with red-hot automatic gunfire.

Rosie would like her crew to have a fearsome rep. As a result she occasionally adopts tactics she has probably seen in movies or from much scarier gangsters. One example is claiming that once they have been contacted the contract cannot be cancelled – no matter what. This does not makes much sense, but it sounds tough.

Her 2004 appearance adds some characterisation. She’s a complete gearhead, with a love for mechanics, cars and trucks, tinkering with mechanical equipment, etc.. She even does her cooking with a blowtorch.

Her idea of a great romantic evening is to go to a monster trucks show. Her house was a ramshackle thing among New Orleans’ poor neighbourhoods, packed with enough gear to open a garage and two mechanical shops. She also kept a journal.

The Mechanic said that Rosie’s heart was “gifted” and wanted that trait to be absorbed by the Enginehead. What he meant is unclear. From her break-up with Samantha and a vague allusion to her journal, we can imagine Rosie had an unusual capacity, and need, for love and friendship. Having this heart broken is what, in a sense, killed her.

“Keep lookin’, fellas ! Once we find the fuel dump we can blow this joint !”

Bonuses and Limitations:
Gadgetry only applies to mechanics.

The DC Animated Universe also has a version of the Demolition Team, which is almost entirely similar to the pre-Crisis comic book one. Based on their comic book appearance in Justice League Unlimited (since I don’t watch the TV show), here are the differences. Note that those very minor improvements would have been quite credible in further appearances of the pre-Crisis team.

A worse case of the DTs

Though the gear and costumes of the Demolition Team are quite Silver Age-ish  (and IIRC were already dated in 1984), upgrading them to be more modern and more dangerous is not too complicated.

The first idea that comes to mind is to use power armour with a signature weapon system (plasma cannon for Rosie, grenade launcher for Scoopshovel (so he can do bouncing shots), chainsaw or impact hammer for Jackhammer, above-baseline /STR/ and /BODY/ for Hardhat, and a ’motorslave‘ attachment for Steamroller).

Related technologies would be the power armour and motorslaves of the Knight Sabers (from Bubblegum Crisis) and the weapons from Unreal Tournament. 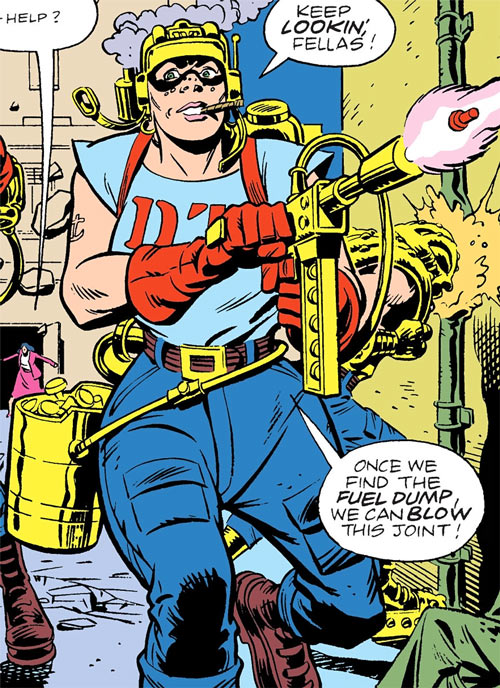 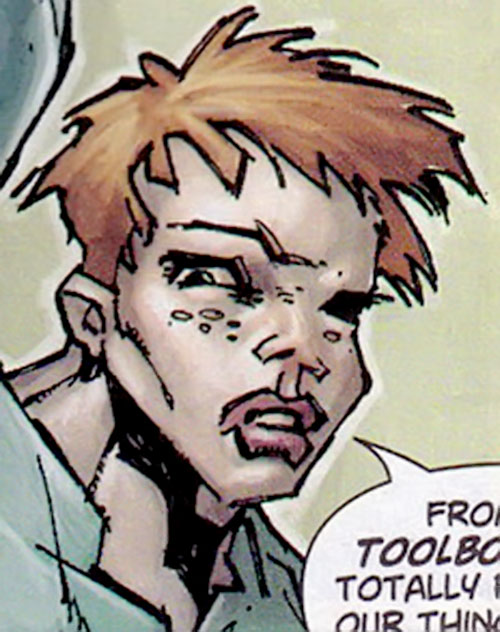