The Royal Palace is the reigning seat of government in Eternia. It’s the official home of the ruling family and base of operations for the heroic warriors.

There is a lot of information in this article. One might find what they’re looking for best by typing (Ctrl+f) to search keywords.

A sprawling palace atop a huge mesa.

The Royal Palace has outposts all over Eternia.

Unrevealed, but they certainly have boundaries. The main characters know where they are and whose land they are in.

The mesa supporting the Palace stands high in the plains surrounding it. Mount Eternia is nearby.

None. They import everything – even Rainbow Quartz, which is only found in Snake Mountain.

The Mesa itself stands equal to the height of the Palace’s tallest structure. So, a couple hundred feet.

None inside the palace proper. In the surrounding area, peasant villages dot the landscape. There is a danger of animal, plant, and monster attacks.

Weather phenomenon shouldn’t be an issue since Duncan once built a weather-controlling satellite. Still, they are plagued by bad weather (episode: Curse of the Spellstone). 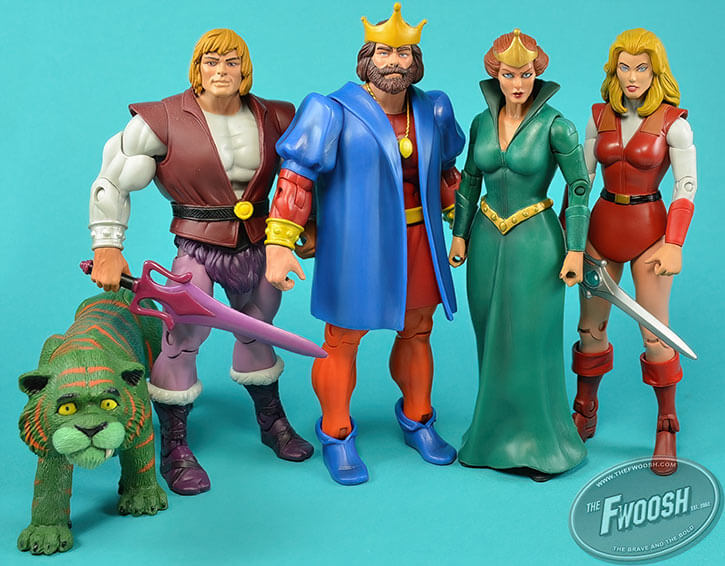 Photo taken by thefwoosh.com, in their toy review for the Royal Palace playset  .

Eternia appears to be a pretty stable Monarchy with Randor as the King and Adam as the heir apparent.

King Randor tries hard to be a good and fair king. His subjects respect him, including his Lords and Ladies. Other kings are given respect and allowed to rule their own lands. As long as they aren’t evil.

King Randor and Queen Marlena. The Royal family is normally in agreement. But, if they aren’t Malena will defer to Randor’s judgment.

King Randor and Queen Marlena are the current rulers. Their decrees are law.

Lords and Ladies with title inside the kingdom govern their own lands, within the confines of the law.

When Prince Adam acts in a diplomatic function, he speaks for his father, the king.

The laws of the land are declared to all, everyone knows them. King Randor holds court and passes judgment on criminals. This usually ends with the guilty sent to the prison mines.

During the Series, King Randor only hands down a few new proclamations.

Eternia has no slavery.

The hunting of animals for sport is outlawed on Eternia (episode: The Huntsman).

When not stated, Eternia can be assumed to have the same laws as the United States.

Once revealed as evil, a villain is dealt with. Second chances are given, but even then, it usually comes with some kind of punishment. Trust must be earned.

Good and evil are clearly defined polar opposites. There is no in-between. The Royal Palace is good, while Skeletor and his followers are evil.

Individuals have been known to switch sides. But pretending to be on the other side won’t work for long.

Setting the mood while you read.

Apparently available for download on Amazon (but looks fishy).

The Royal Palace is involved in a world and a universal economy. But it’s mostly background. For instance, we know they have trade agreements with allies like the planet Phantos.

See the “Wealth” section in the Masters of the Universe Setting article.

The Royal Palace is sometimes referred to as Eternia or Eternos. Home to King Randor and Queen Marlena of Earth.

King Miro, Randor’s father, was lost in a battle with his evil enemy, The Enchantress (no relation). Randor never believed he was dead. This was before Orko came to Eternia (Episode: Search for the past). 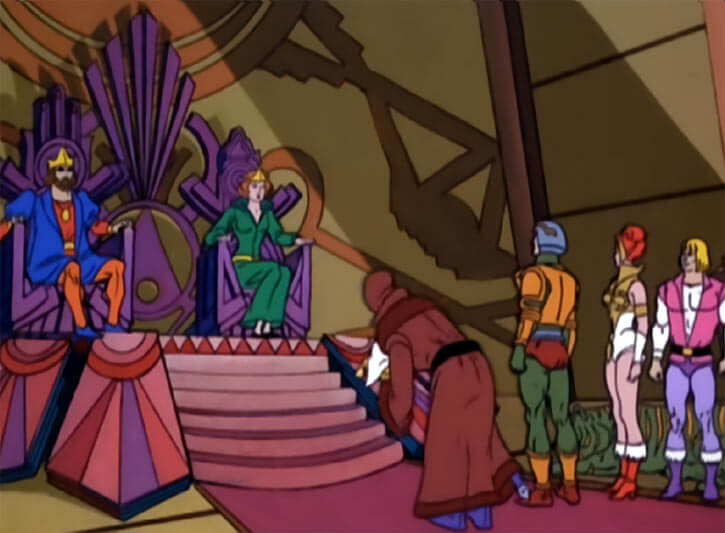 Who’s at the Palace besides the namedA character with more narrative immunity than nameless extras heroes? 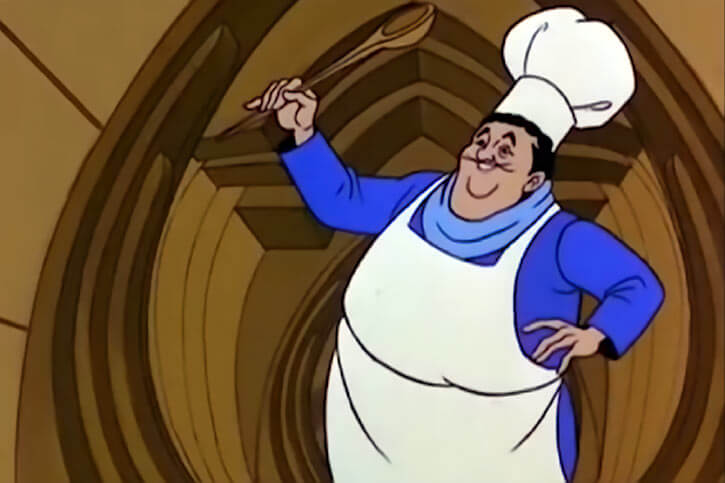 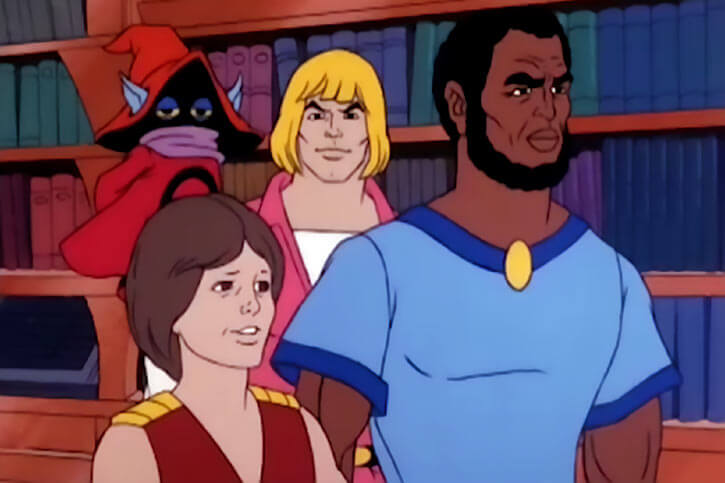 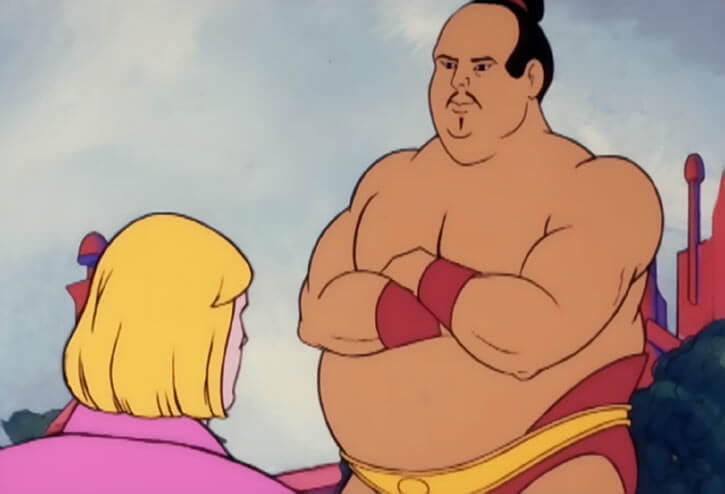 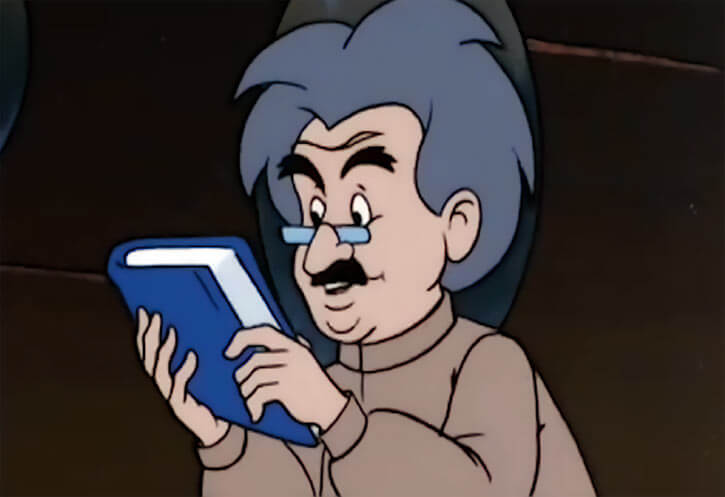 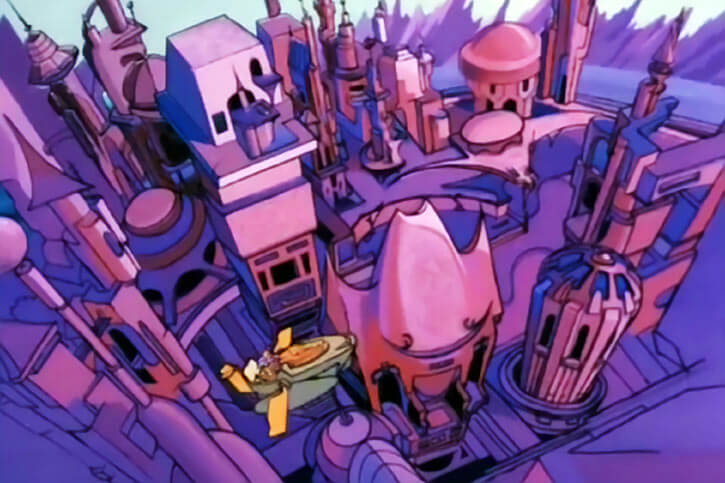 Man-At-Arms invents and maintains the equipment, vehicles, and weapons at the Palace.

Beam-Ray [BODY 05, Energy Blast: 22]. It may be set as low as 09 APs for sculpting stone up to 22, blasting tunnels through mountains.

Beeper [BODY 02, Summon Animals: 06]. Man-At-Arms designed it to attract anything that flies. It can attract Wolf-bats as well as the hero Stratos.

Communicator [BODY 02, Radio Communications: 14, R#5]. This was like hand-held walkie-talkies. There are at least two of these.

Electro-thought projector. Use stats for the memory projector (below) but it only gets surface thoughts. It doesn’t need a helmet. It only reads the target’s mind and projects it on a large view screen.

HIGH-FREQUENCY TRANSMITTER [BODY 06, Radio Communications: 20, R#5]. This transmitter controls communications for all devices in the Kingdom.

Homing Device [BODY 01, Radio Communications: 10, R#5]. This pair of homing devices may only be set to either send or receive to one another. Usually, they are set so that one sends and the other receives. No other communication may be used only a beeping as the pair are closer together.

MECHANICAL ANIMALS [Physical Attributes match their living counterparts, Skin Armor: 01, Artist (Actor): 07 (portraying the animal’s actions and mannerisms). Here is an example from the series:
ANDROID HORSE [Dex 02 Str 05 Body 05 Int 01 Will 01, Artist (Actor): 07, Running: 05, Skin Armor: 01, Bonuses and Limitations: Artist (Actor) is only to imitate a real horse (-1 FC), R#2, Cost: 88]. Note: these mechanical horses get treated like living horses, housed in barns or tethered to posts when not ridden.
The Android Horses enforce this further by acting like horses too. Whinnying and rearing if startled, grazing, nosing up to be petted, etc..
They are used in many other kingdoms, apparently, only peasants use real beasts of burdens.
The one Adam rode he named, Strider (episode: Pawns of the Gamemaster). He’s not to be mistaken with Stridor (detailed below). 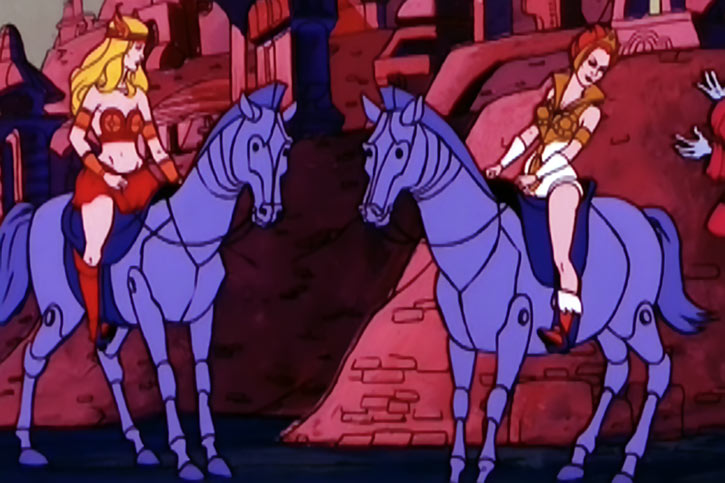 Memory Projector [BODY 03, Mind Probe: 13]. Projects a large energy screen that plays like a Television. It shows a specific memory from the person wearing the projector.

ORBITING ETERNO-SCOPE [BODY 04, Detect (Element): 24, Telescopic Vision: 20, Radio Communications: 22, Bonuses and Limitations: Detect may be tuned to whatever desired element and pin-pointed by the telescope]. This is an orbiting satellite with a telescope that sends pictures back to Eternia.

Portable Teleportation device [BODY 02, Teleportation: 07, R#3]. Man-At-Arms says he could move any object anywhere. He wanted to test it in a remote area though afraid it might fail with catastrophic results. Man-At-Arms went on to say that if the batteries are fresh it could even teleport four or five people.

Rock Softener [BODY 05, Energy Blast: 18, Power drain: 28, Bonuses and Limitations: Energy Blast destroys materials at a molecular level. It may only damage inanimate objects that have been targeted for at least 03 phases. APs that were Power Drained are returned immediately once out of the Rock Softener’s beam. Power Drain affects STR attribute only (-2 FC). R#2]. Turns rocky areas to soft soil for farming. This thing is very powerful. When turned on He-man it drained him of his Strength, dropping him in a single shot. All effects are reversible with the turn of a handy dial.

Snare gun “Lasso” [BODY 05, Snare: 12, R#5]. This weapon sits on a tripod. It stands about waist high to Man-at-Arms. The trigger is a button on the top. When pressed, a length of energized rope ensnares the target.
Snare was rated at 05 APs at the beginning of the episode but by the end, Teela and Man-At-Arms had tweaked it to its current value.

SUPERCOMPUTER [BODY 06 Int 02, Detect (Geological Occurrences): 14, Remote Sensing: 14, R#2]. This super-computer can observe and transmit catastrophes happening anywhere in Eternia. Man-At-Arms can converse with this computer and it will report all that it can to him.

VHO [BODY 04, Aura of Fear: 05, Sonic beam: 01, Bonuses and Limitations: Aura of Fear and Sonic Beam only affects animals and those who can hear it]. Essentially a fear-inducing dog-whistle.

Web-cord [BODY 04 Str 03]. The web-cord is a hand-held rod that looks kind of like a long flashlight. A beam fired from it quickly gels into a taut strong rope. Str represents the amount of weight the “web” will hold before falling away from its point of contact. 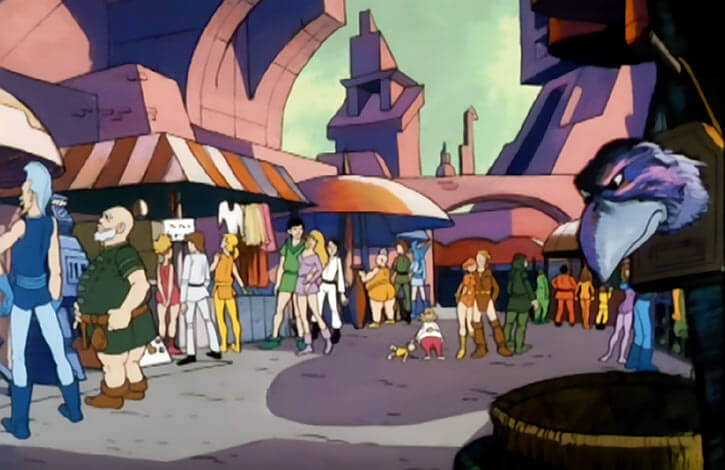 It has terrific strength and a computer system that detects trouble. The perfect companion for He-man. Stridor uses a megaphone loud whinny to sound a warning of danger.

By the end of the episode, Stridor gained mental and mystical attributes, becoming more than a machine. His thoughts were on roaming free (episode: Origin of the Sorceress).

Artist (Actor) is only to imitate a real horse. 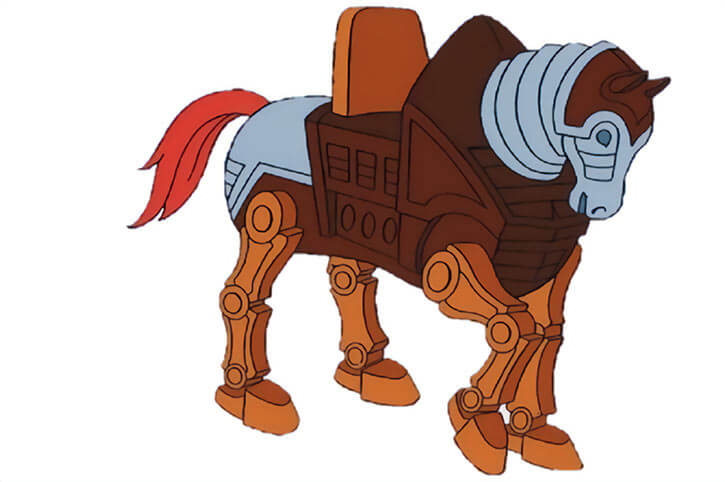 All manner of melee weapons are available at the palace. Use standard stats for those.

Any melee weapon crafted from Phantonium will have a BODY 18.

Electric Force Shield [BODY 05, Force Shield: 10, Flame immunity: 10]. An energy shield projected from a wrist band on the left hand. Once deployed by the press of a button, the shield acts as a medium-sized shield.

Energy Pistol [BODY 04, Energy Blast: 06, R#5]. These are sometimes shaped like a flash-light instead of a pistol.

Energy Shields [BODY 04, Force Shield: 10, Reflection/Deflection: 05, R#5] mounted on wrist bracers. These were tested by He-man and used in some late episodes of She-Ra (episode: Shades of Orko).

Freeze Ray Pistol [BODY 04, Ice Production: 08, R#5, Bonuses and Limitations: May only be used to trap target in a block of ice (-4 FC)]. Man-At-Arms will sometimes carry this sidearm with him when on trips, especially when guarding the King.
Later, Man-At-Arms makes a new more powerful Freeze Ray in his lab but it is never as reliable as his Pistol.

When Adam needed to travel in the ice kingdom. Princess Janice remarked that she had noticed Adam’s “Snow-Trak”.  Perhaps like the Wind Raider, Man-At-Arms also outfitted at least one Attack-Trak for arctic travel. There’s always a Sky-sled or two stored within the Attack-Trak. He-man calls it “Trak” for short. 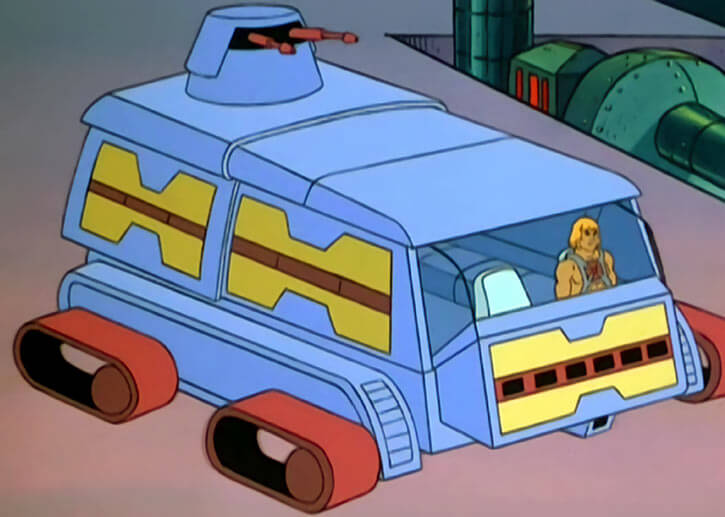 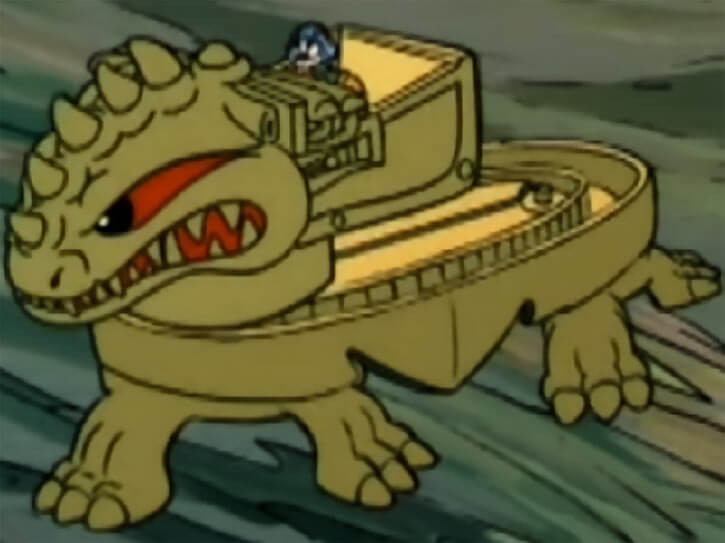 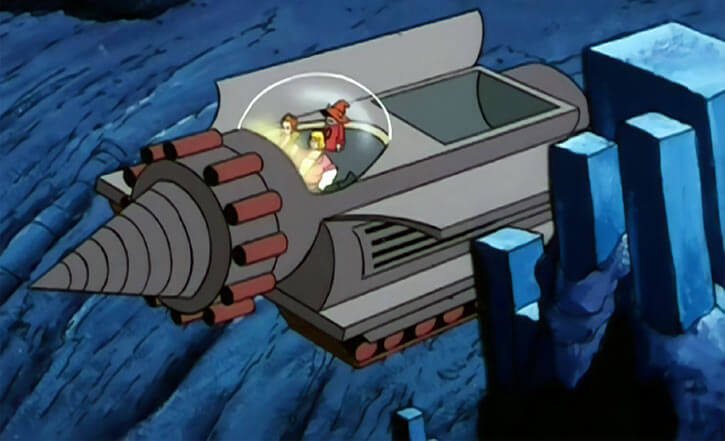 SKY-SLED [BODY 07 Int 01, Flight: 07, Energy Blast: 12, R#3, Cost: 104]. The gas pedal is on the right side. When riderless, the Sky-sled will slow to a stop, descend to the ground, and shut off.
It also has an auto-pilot that can be programmed to travel, unmanned. It does have a specific range though, Teela mentioned it needs recharging.
This versatile flying vehicle was called a Battle-Ram in early episodes. Later, Battle-Ram was only used for the name of the Sky-sled when attached to the four-wheeled vehicle detailed below. The Battle-Ram has either a disintegration cannon or tow-line attachment. Of course, the Sky-sled can’t fly while attached.
BATTLE-RAM [BODY 07 Str 05, Disintegration: 13, Running: 05, Snare: 08]. 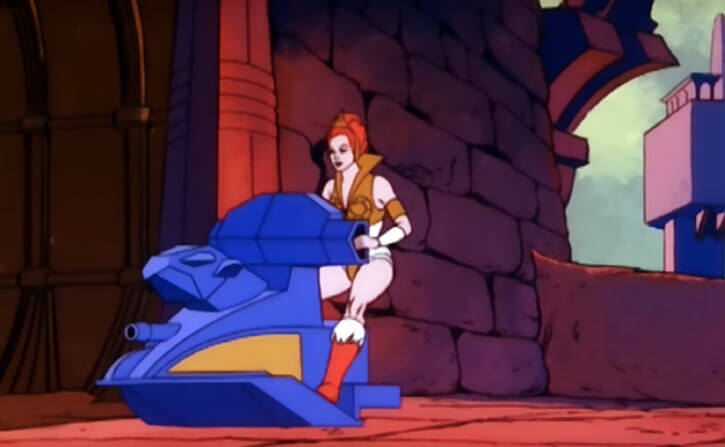 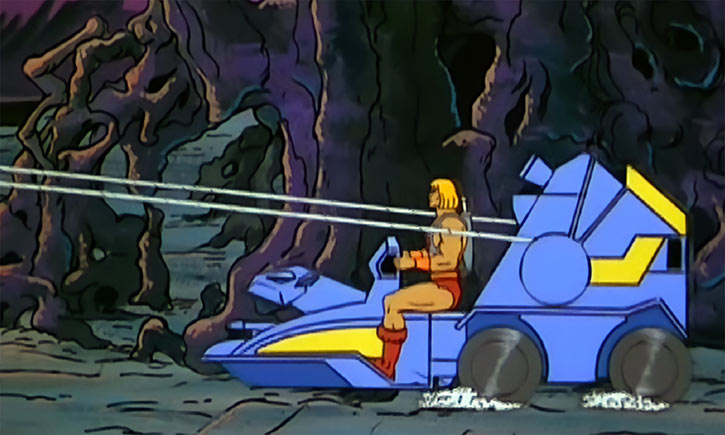 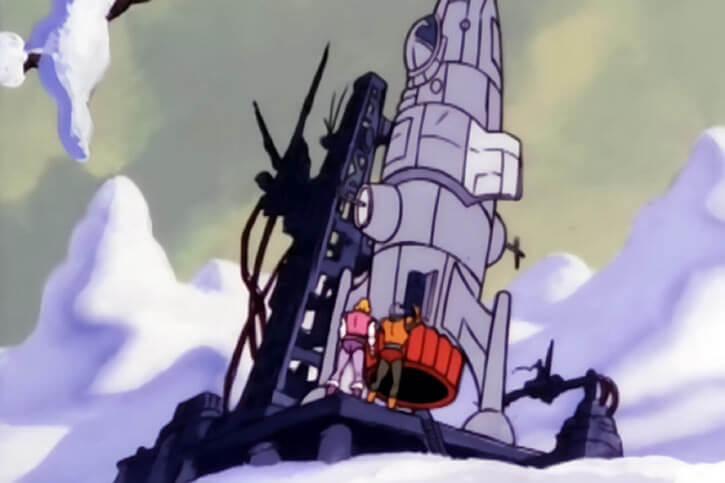 TALON FIGHTER [BODY 07 Int 02 Str 04, Vehicles: 03, Flight: 08, R#2]. The Talon Fighter has a decent A.I. reporting all damage taken, and taking over with autopilot when needed. Even coming at He-man’s whistle. The Talon Fighter can come to a complete stop in the air as if someone hit the brakes! 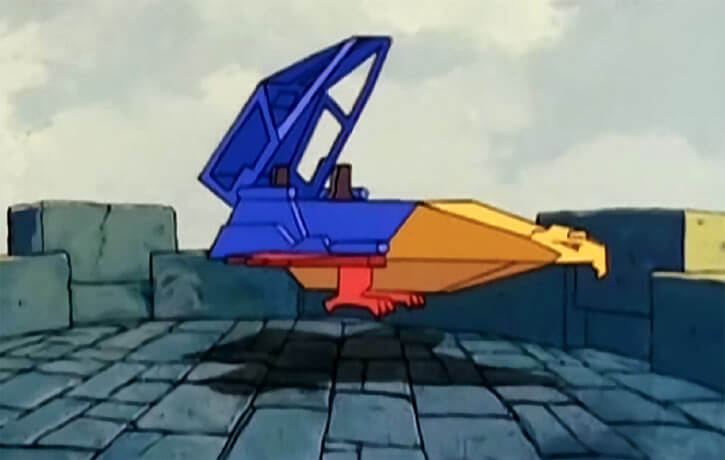 WIND RAIDER [BODY 07 Int 02 Str 04, Vehicles: 03, Claws: 07, Energy Blast: 07, Flight: 08, Laser Beam: 07, Radio Communications: 14, R#2]. The Wind Raider has a decent A.I. reporting all damage taken, taking over with autopilot when needed. Even coming at He-man’s whistle. It can also hover in place and can still glide when it loses all power.
Claws represent a grappling cable the Wind Raider can use to harpoon another vehicle and tow it behind itself. The line is 05 APs long with a Body 07.
Man-at-arms attached a new rocket booster powered by Corodite to one Wind Raider. [BODY 07, Flight: 09, Flight: 28, Bonuses and Limitations: Flight 28 is only for space flight, R#5] (episode: Jacob and the Widgets). 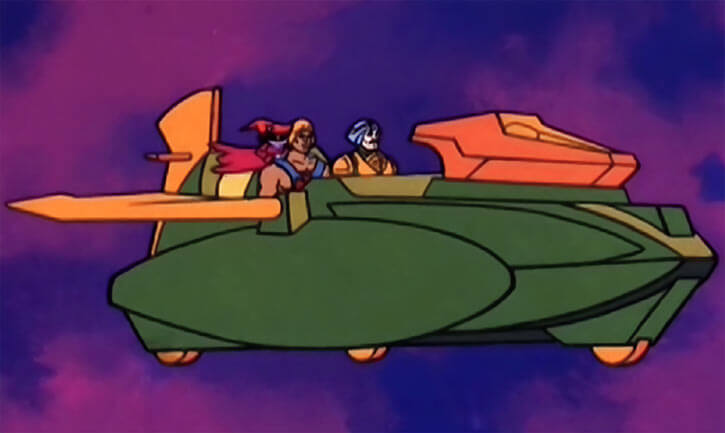 As Captain of the guard, Teela can call on Royal Palace soldiers to help her defend it. She can gather a contingent of a dozen or so guards in less than a minute and have them airborne on Sky-Sleds. 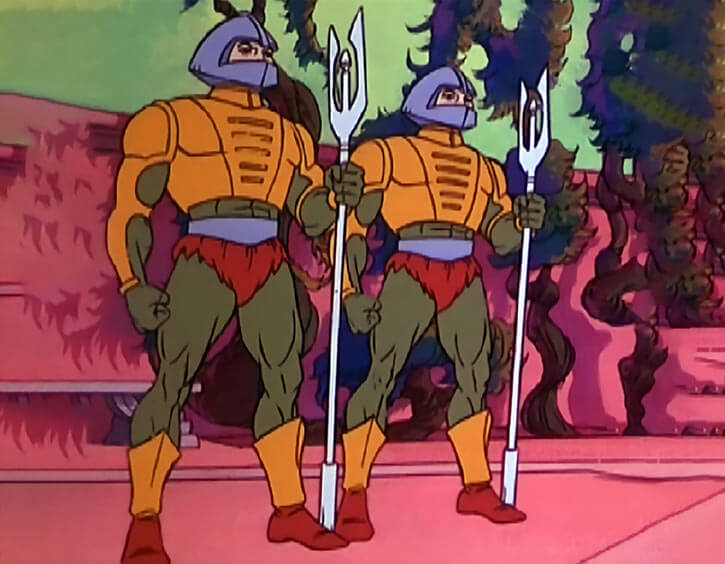