This is a chapter of our Weapons Locker – Body Armour series, a great and thunderous saga full of, err, well, body armour.

The start of the series is about the DC Heroes RPG rules for body armour. So DCH players should start there, to make sure they understand the stats.

As with all our Weapons Locker article, the goal is to model pop fiction. TTRPGs, comics, fantasy movies and novels, video games, etc.. This is definitely not serious military history.

This article is in beta. I prefer to get the basics out of the way before I start doing the genuine research. Since said basics are needed in so many character profiles.

Many of the medium (and heavy) armour types are, historically, quite resilient against edged weaponry. Slicing through metal with a sword or ax presents obvious difficulties.

However, most fiction retains the image of knights, samurai, chevaliers, youxia or whichever being armed with a sword and successfully engaging well-armoured opponents. The symbolism of a sword is a strong one in most cultures.

This is also true in many modern RPGs, novels, videogames, TV series, etc..

In our body armour articles, we strike a murky compromise as always :

This is a large version of the quilted armour, described in the previous chapter. Rather than a jacket or a onesie, it is a full length heavy dress. Or a robe, if you insist.

The examples that come to mind are some African cultures of old. For instance the sultanate of Baguirmi  (in what is now Chad) and certain Sudanese warriors. Their bulky war robes were visibly padded using raw cotton.

Though these are a 20+ pounds (9+ Kg.) affair (dry !), these offer robust protection even against sabre blows. The latter came as a surprise for colonisers…

Partial Coverage at Long Coat level is the norm. 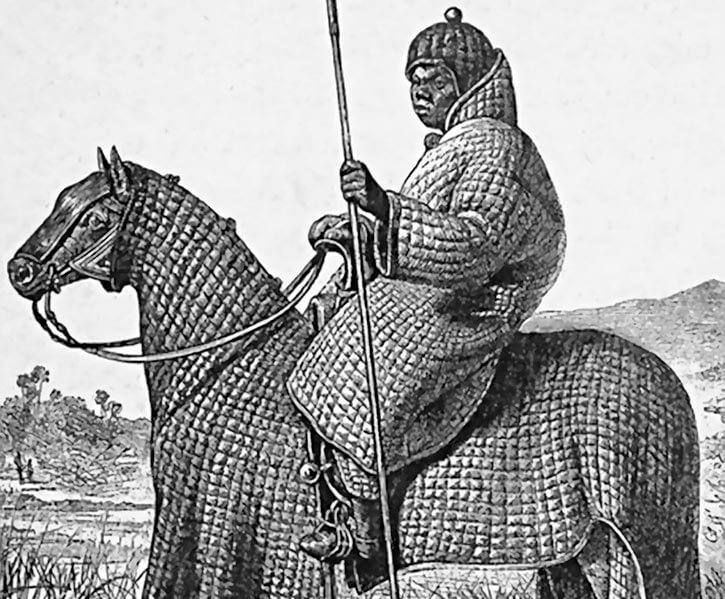 Wearing thick fur clothing usually is the province of fantasy barbarians and fantasy cavemen. And orcs.

The use of this “armour” in reality may not have been common. Even when it comes to folks who live in sub-arctic climates. Using multiple layers of soft hide to trap warm air within is less cumbersome, more efficient, and easier to waterproof.

But in case somebody *is* wearing clothing with thick animal fur that looks like it should cushion blows, we suggest this. 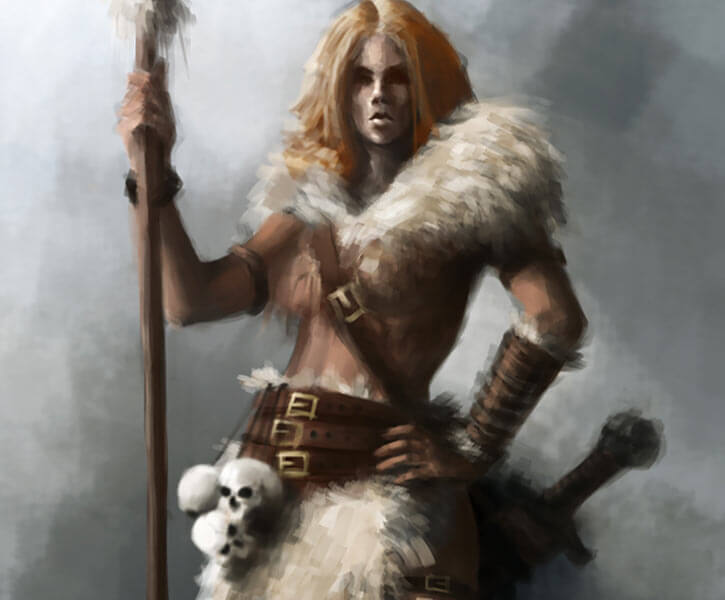 Archetypal fantasy barbarian warrior with protective fur. Art by Vlad Gheneli from his DeviantArt page  , who as of this writing does commissions.

In the traditional D&D nomenclature, this is thick non-metallic armour worn by nomads, barbarians and humanoid hordes.

It is probably not rawhide. Because once rawhide gets wet, its worth as armour is sub-zero.

Thus, it is likely a mix of nearly rigid pieces made of layered leathers, and soft covering made of cured but not tanned hides to protect the joints. There may be harder bits, perhaps crafted out of bone or bronze, to reinforce and structure the lot.

It seems mostly there to occupy a slot as “cheap, easy to make but bulky leather armour” in a setting where the words “leather armour” are associated with stealthy characters. 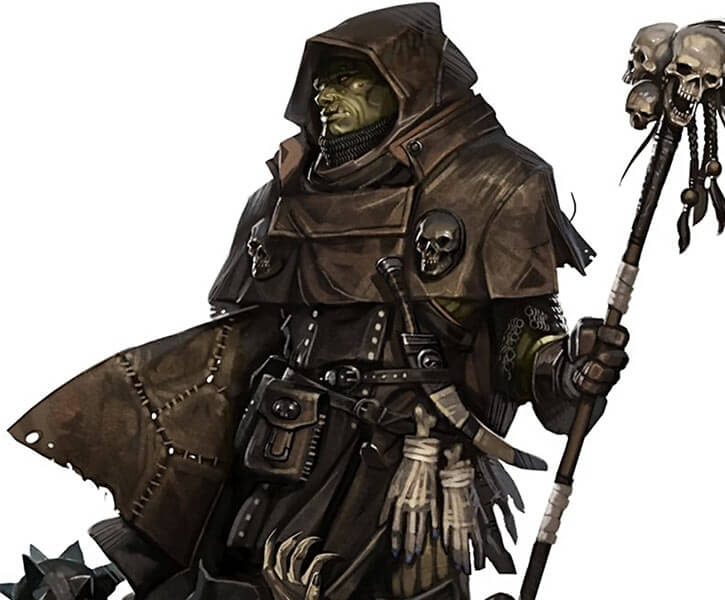 Orcish cleric in a reasonable interpretation of D&D “hide armour”. This specific illustration is from the Pathfinder sourcebook Ultimate Magic.

Chainmail (or mail armour) is made of interlocking metal rings. It is usually worn over a padded foundation (called a gambeson or pourpoint).

In popular imagery mail is often associated with Middle-Ages European men-at-arms. But this invention actually precedes Historical times by centuries.

This sophisticated armour excels against edged weaponry. And, for that matter, animal bites and shrapnel. Breaking chainmail with a sword is extremely difficult.

Mail is also lighter, less heat-trapping and more flexible than a solid plate.

However, mail does little to stop raw impact. For that, you have but the gambeson underneath. Mail is also poor against bullets and the better crossbow bolts. 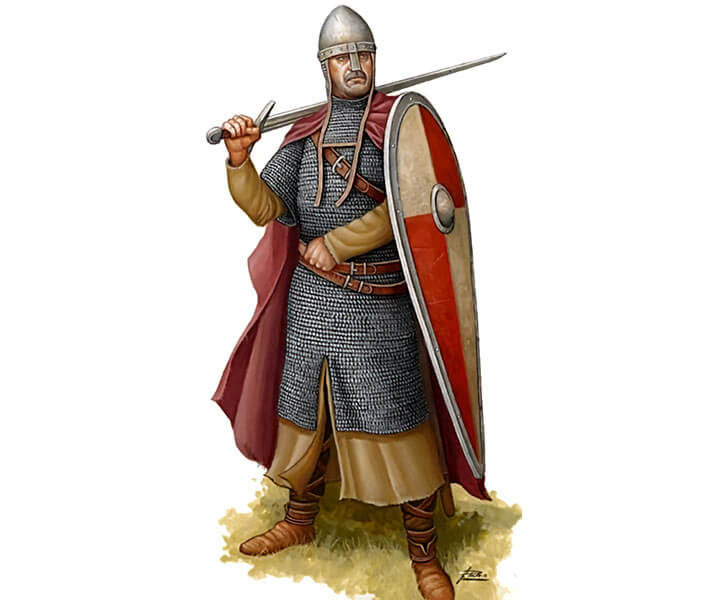 Archetypal Norman knight in chainmail hauberk (circa the year 1,000 would be my guess), which matches the popular image of chainmail. Illustration *probably* from one of the Osprey books about Norman fighters, but I can’t check.

This is a specialised, harder-to-make form of chainmail.

It is light, quiet and thin, and can be worn under loose clothing. The light rings are assembled in a particularly tight pattern, to leave the smallest possible holes.

This isn’t intended for combat. The goal is to prevent knife thrusts from penetrating too far. It’s for security against assassination, or just random assaults.

This form of chainmail is sometimes associated with “the East”. That’s because the techniques to make it were at times known in the Middle East but not Western Europe. The technical term is therefore jazerant or jazeraint, which is badly mangled Arabic.

Partial Coverage (Vest) would be the usual. 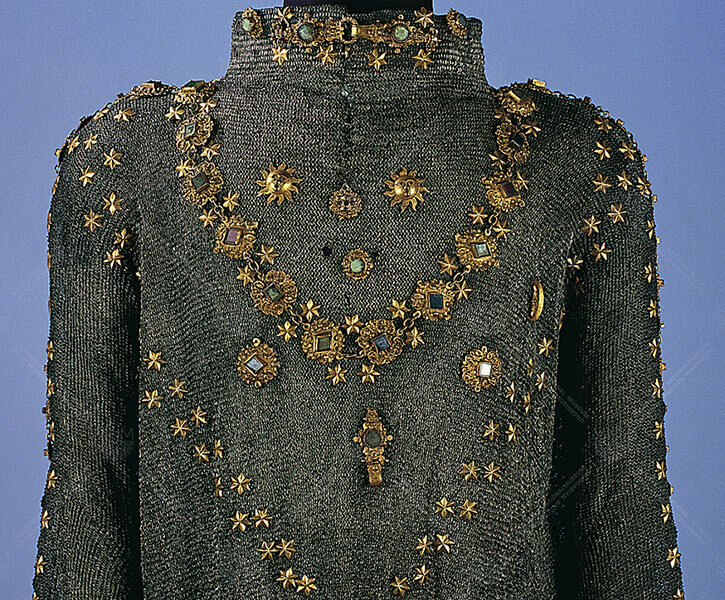 This tight-pattern mail shirt was worn by Rákóczi György II of Transylvania. It is now kept at the Hungarian National Museum  . It’s not particularly discreet, but a photo of a hidden mail shirt wouldn’t be super-interesting.

Ninja mail isn’t when you send a letter so discreetly, nobody realises it has arrived. No, it’s something close to the concealed chainmail above, also with an emphasis on silence and flexibility.

The coverage is more extensive than mail, and it isn’t quite as concealable. It’s not meant to be worn in everyday life. Still, it’s concealable enough to be worn under loose clothing on your way to the job. And it gives you odds that stray arrows and sword hits will not rupture your organs.

Fictional ninja, who get to wear the black or dark red “ninja garb” inspired by theatre stagehands, might wear chain underneath. But this is usually done by elite ninja, not mook ninja.

Partial Coverage (Jacket) would be the usual. 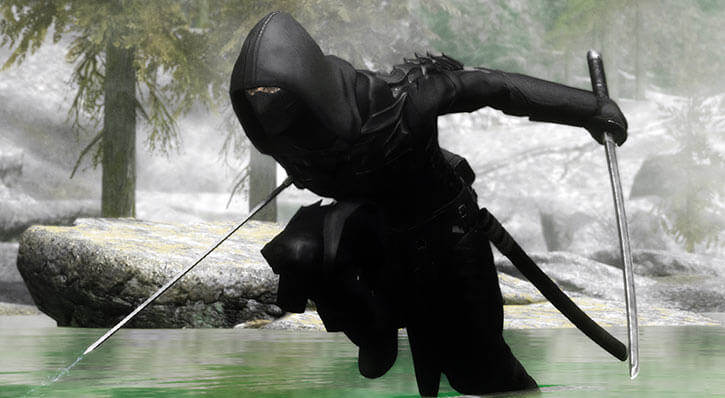 We just need something ninja-ish here. As a slight variant, we’ll use this modded Skyrim screenshot by Liemertha  . It features a drow armour model by Newermind43  .

A late form of the mail armour, using thicker, heavier rings. This is made workable by better technique.

This type of armour normally corresponds to the tech level with watermills, windmills and other late/high Middle Ages inventions.

Technically, heavy mail hauberks should be in the next chapter about heavier armour but heh, work with me here. Let’s keep the chain armour types together, because you’ll never break the chain .

That normally comes as a hauberk, meaning Long Coat-level Partial Coverage. Note how the main difference is Conditional Soaking, so this makes more sense for elite and leader types — with Hero Points — to wear. 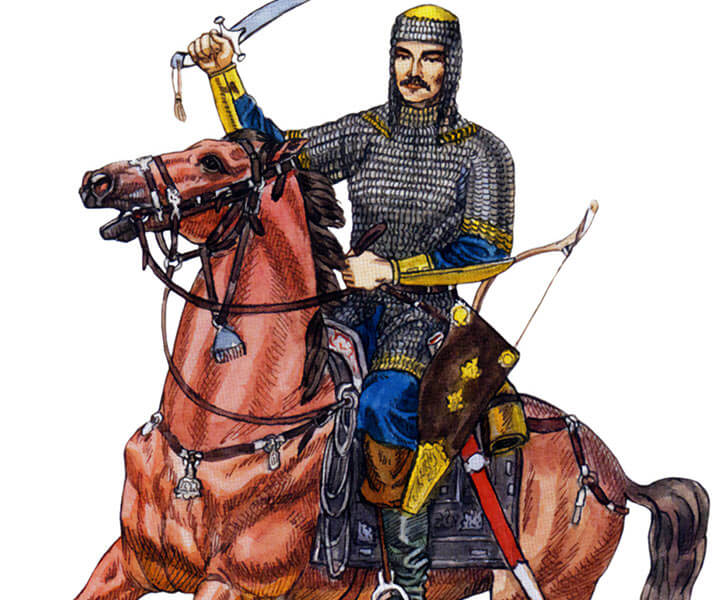 Reportedly a XVIIth century Kazakh mounted warrior. Image found unsourced, because lol yolo roflmao. As the moustache implies, Kazakhs are one of the Turco-Mongolic cultures that emerged after the Golden Horde fell apart.

This is an earlier attempt at having a plate of bronze protecting some vital organs within the torso.

However, the technology and metallurgy aren’t yet up to par. Which forces a kludge giving but a poor coverage.

One good thing you can say about it is, the troops won’t get overconfident in their body armour.

The cleanest way to handle this armour is to have an additional level of Partial Coverage. Which requires using normal scale DCH with 1-AP wide Columns, or Double Scale DCH.

The added granularity allows for a Trick Shot penalty of 1 AP (normal scale) or 2 APs (double scale), one step under Vest-level Partial Coverage. 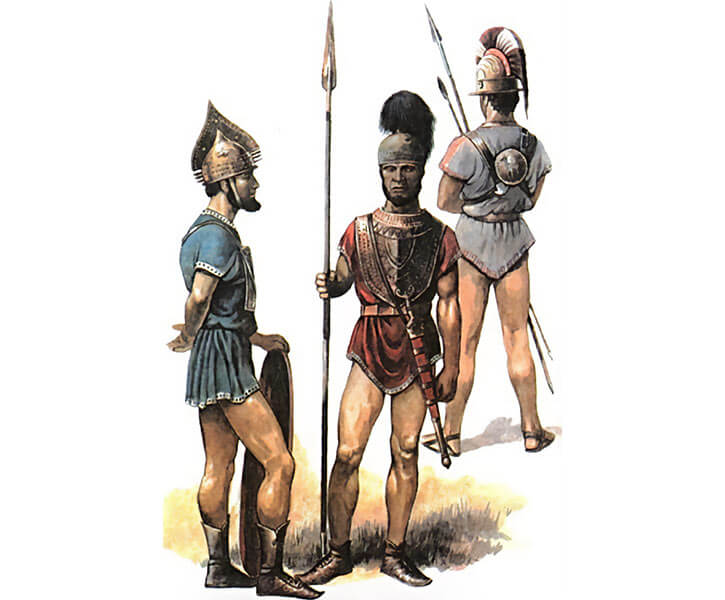 A cuirass of solid bronze protecting the torso.

The bronze model gets a separate entry from iron-based breastplates. This is to emphases the pop-history version of Bronze Age hardware being vulnerable to Iron Age (and later) weaponry. Since it is much softer. That could be a story beat in low-tech milieux.

Coverage will usually be Vest-level. 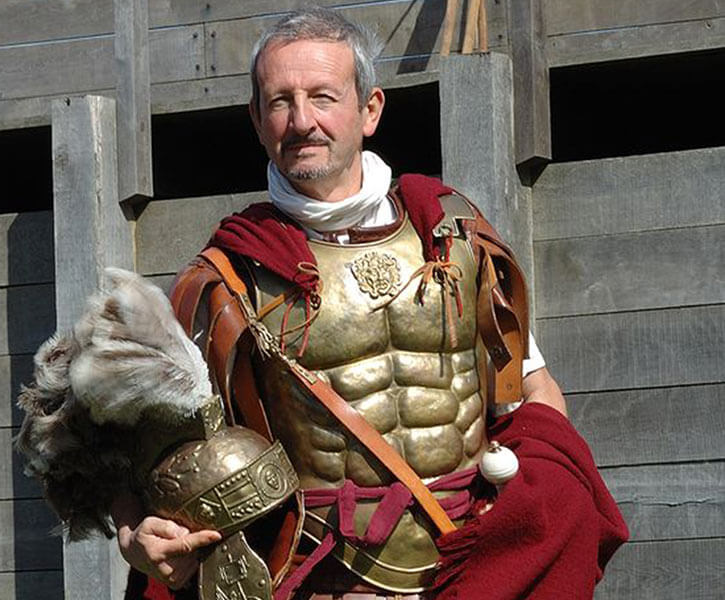 Nice reenactment costume for a Roman tribune (a kind of officer), which features an archetypal “muscle cuirass” breastplate.

A manica is a sort of Ancient Roman armoured sleeve. It was part of the equipment of some gladiator “character classes”, but it also some military use. It complements a breastplate.

It is a series of leather straps around the arm, upon which have been riveted thin, curved metallic plates. So it’s textbook lamellar armour. The metal only wraps around the arm a little bit – the lamellae mostly *rest* on the arm.

While it’s light enough not to hinder the wielder, it will likely prevent your non-shield arm from being slashed open by an enemy’s blade. This became important in battle as long, hooked blades turned out to be a good counter to the Roman legionnaire’s fighting technique. They could slash a soldier’s gladius arm.

(This type of long hooked sword is usually called a “Dacian falx” in English. They turn up in the weapons lists of some video game, such as good ol’ Diablo II.)

A manica can “stack” with an existing armour, like helmets do. Of course, this only works for armours that do not have arm protections, which usually means Vest-level Partial Coverage.

It adds the following to the suit — [BODY 02, Damage capacity (Slashing attacks only): 02].

These stats assume that depleting the manica’s Damage Capacity damages it enough that you have to get a new one. A more robust, less diposable form of manica would simply be treated as extending the Partial Coverage from Vest to Jacket. 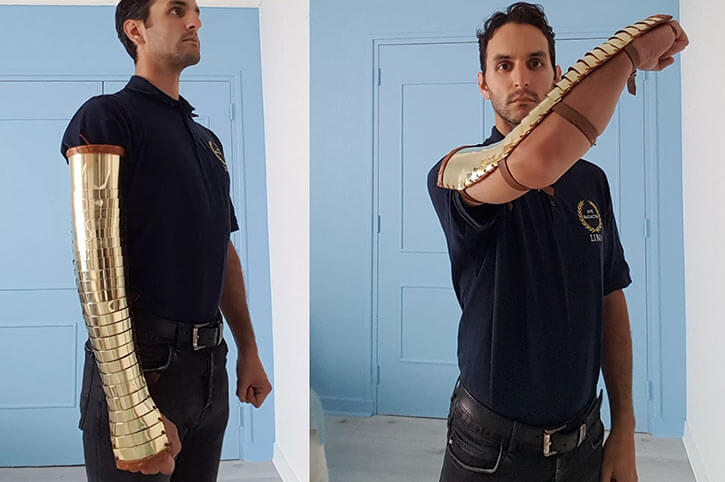 An attempt at recreating a military manica, from a reenactment association  .
There aren’t enough historical sources, and the leather of archaeological finds has long since rotten away. So guesswork has to be involved.

“Half-plate” is TMK much more of a TTRPG term than a historical term. But it efficiently conveys the idea – plate armour that’s not just a breastplate, but doesn’t provide full coverage either.

By the 1600s the Middle Ages were of course over, and the cost-effectiveness of body armour had markedly dropped. But this sort of half-plate : 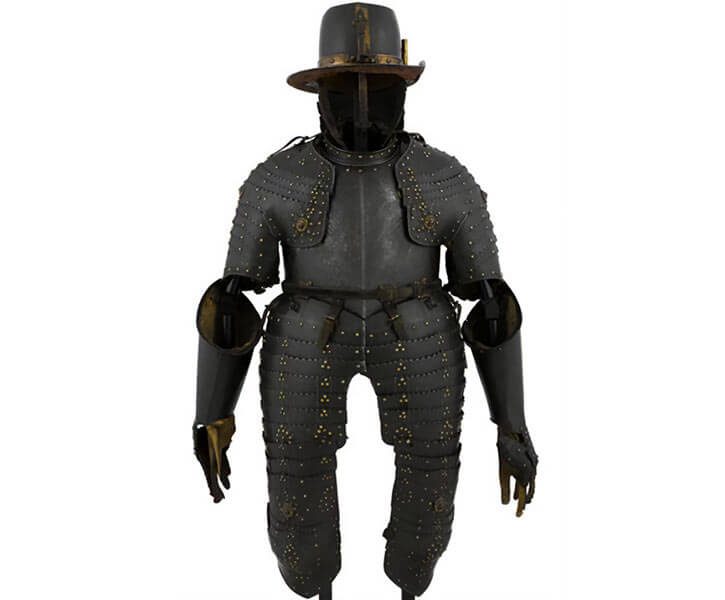 Here’s a nice-looking European example. It’s now kept at the Invalides military museum in Paris, and was used by a XVIIth century musketeer.
This armour is blackened, as was the fashion back then. The goal was to resemble cheap-arse Nuremberg-made breastplates that were used by light cavalry raiders. These guys had an aura of rugged edgy manliness, see.
(Nuremberg plates were black because polishing them would have been a waste of time. The steel wasn’t the best).
And now that I’m adding the picture, I realise that I should prolly clearify that the “belt” is actually where the wearer’s ribs end, in order to retain mobility of the waist and hips.

As firearms increasingly dominated the field, European protections evolved toward this kind of military breastplate.

The steel is much better and heavier, and is “proofed”. That is, it can demonstrably stop a musket bullet. But covering the limbs just isn’t cost- and weight-effective. Especially as armies are now larger and operate over longer distances.

So the suit is a heavy frontal plate, plus a backplate, and probably a helmet. These protect against centre-of-mass hits, particularly from handguns or at a longer range.

In French a breastplate is called a “cuirasse”. Which led to most European warriors wearing one (usually cavalry) being called cuirassiers.

Firearms eventually outpaced breastplates, especially in terms of cost effectiveness. This, plus progress in battlefield surgery and disinfection, meant that they were gradually abandoned.

But eventually, ballistic fabrics and ceramic plates would bring back the breastplate, then the half-plate. 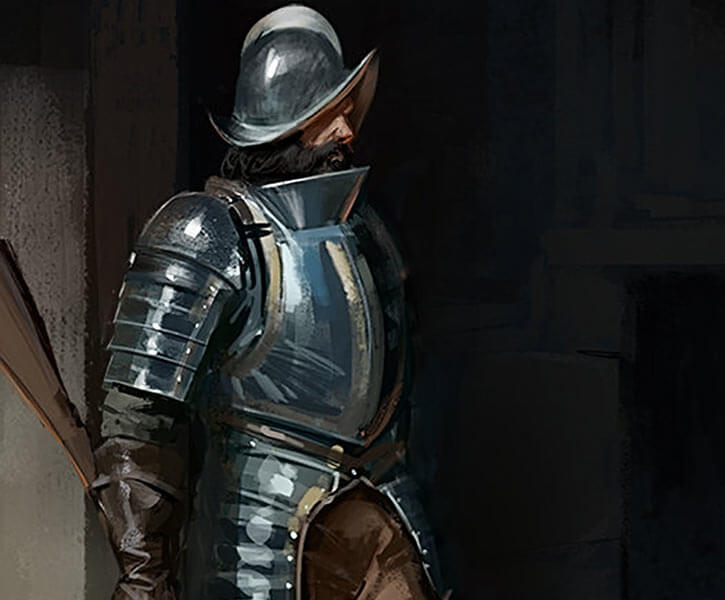