Our general weaponry articles do a Pareto. The “common” articles list what 80% of characters use, and the “special-purpose” list the rest.

This article is a repository. That is, we add weapons to it when the need arises, rather than attempt systematic coverage. So here’s a starter set.

A slim thrusting/stabbing sword hidden within a gentleman’s cane. These were popular during the XVIIIth Century, and especially the Long Nineteenth Century.

The era still had many upper-class men trained in fencing and martial honour. But packing a sidesword was increasingly out. Therefore, concealment.

Of course, many fictional heroes from these eras belonged to that category.

This typical-looking cane-sword was once for sale on Naturabuy.fr  . The brass handle is sculpted into a goose.

A sickle. Variant blade shapes exist, depending on the fields to be harvested, but a common one is for rice.

“Kama” is the Okinawan name. But similar tools are common in a wide area.

Like many Okinawan weapons used in the kobudo martial art, it has plausible deniability. Even under a military occupation, peasants are going to have such sharp tools to work the fields. The trick is to learn to use it in combat.

In order to face swords and spears, kama are often used paired – one in each hand.

Some also have a wrist strap, but that prevents francisca-like throws. And some have hand guards, though that ruins plausible deniability.

Kama has a limited presence in comics. They tend to appear in the hands of disposable ninja goons, for some reason.

Our previous melee weapons articles had kobudo explainers by Shihan Mishiuchi. And lo, there’s a video about kama too.

Let’s also have a kata, performed slowly for paedagogy. Note :

These specific kama are made in the UK by Seaholme.net, to harvest the majestic rice fields of Yorkshire.

This is a mācuahuitl – a “sword” chiefly associated with ancient Aztecs.

These are flat wooden clubs, looking like a cross between a sword and a paddle. On the striking edges are rows of “teeth” made of obsidian, a particularly sharp volcanic glass.

The teeth are embedded into the club to compensate for their fragility. This forms a deadly edge, at least in cultures without access to metallic body armour.

Mācuahuitl techniques may have resembled broadsword ones. But after a strike, it makes sense to pull the weapon back to perform a sawing motion with the edge.

The stats below describe the equivalent of a broadsword. About 75cm long, one-handed, meant for war, straight edges.

But in illustrations and historical accounts there also are short ones, two-handed long ones (famously said to be able to decapitate a horse), ceremonial ones, etc..

A replica from Occoquan Paleotechnics  .

These are often associated with WWI trench warfare.

Such a club is made of stout wood, with the business end shod in metal. The head also features large spikes. These are useful in defeating leather armour, such as German spiked helmets. Or penetrating human skulls, which ain’t that easy.

Such weapons also feature in fantasy, often in the hands of orcs, goblins and the like.

It’s cheap, requires little training and has more reach and momentum than a knife.

This trench club was once on sale on Etsy, and that’s all we know about it. It likely is a modern replica based on a photograph of a historical trench club, but that’s just my amateur guess.

What these are is never quite detailed. But our extraordinary nerd minds could deduce that it’s a blade that vibrates.

From there these made a return in 1970s space sci-fi, such as Star Wars or the Traveller tabletop role-playing game.

The concept is a powered short-ish sword, using sci-fi metallurgy. The cutting edges perform rapid micro-oscillations. This both produces heat and has a sort of auto-sawing action against what is struck.

As Heinlein’s Sister Maggie points out, the heat means that there’s no bloodletting.

The Traveller TTRPG vibro-weapons are used while boarding starships. The cramped architecture therein can easily force close combat rather than gunfire. IIRC (where’s my copy of that vintage Traveller box ?), they tend to be cutlass-like.

Our game stats assume that the vibrating edge is doing the bulk of the damage. Thus, the strength behind the blade isn’t much of a consideration.

These are conservative stats. For vibroblades that are simply a niche weapon in gritty sci-fi settings.

More heroic vibroblades would have more APs, and quite possibly a few APs of Sharpness. In settings where they can parry lightsabre strikes, a higher BODY is also necessary. 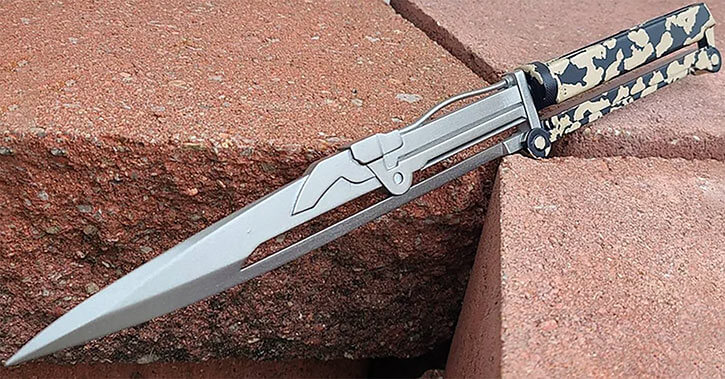 Star Wars vibroblades most existed in the Expanded Universe – unless you count the vibropikes wielded by the Emperor’s red-clad guards. But with the 2019+ The Mandalorian TV series, these had a clearer presence. Which led to plenty of replicas for cosplay and the like. I *think* this specific one comes from this Etsy shop  .

This is the semi-fictional version. A pair of hand-held, folding, almost-semi-circular fans. The “spines” are metal spikes, the lateral spines are extremely sharp blades, and the main material is hard enough to block sword strikes. Somehow, it can remain firmly in hand.

This weapon can somehow pass as a normal fan. Especially in areas where they are common due to stifling weather and/or a desire to look all ladylike n’at.

In stories, war fans tend to have the defensive properties of sai, combined with the offensive power of a Bowie-style knife. Another draw is that they can be used to perform beautiful fight choreographies.

Rapidly opening and closing the fans can also allow for feints. 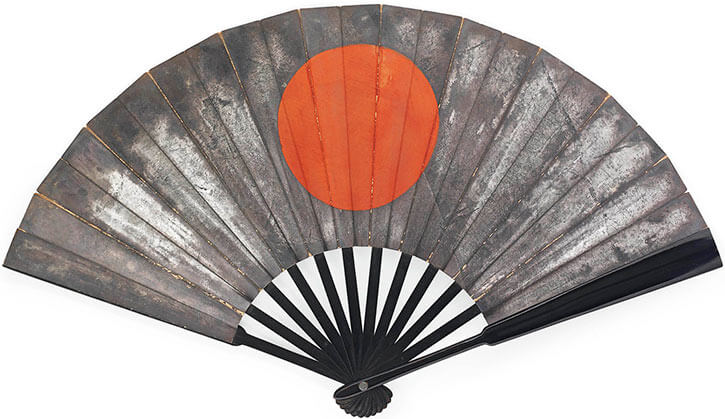 An Edo-era Japanese war fan (gunsen) once sold at Christie’s.

This is the missing link between a truncheon and a mace. So it’s a club (usually made of wood) but with a bulbous, hard, weighted business end.

I wouldn’t call it a “rare” weapon. It’s just that truncheons and maces are much more common in stories. Still, recurrent fictional users are :

The archetypal ones are :

Some designs of Southern African war cudgel use a somewhat flexible handle. Thus, it will store more energy when swung, and deliver it upon impact. That’s not unlike a blackjack.

It can also be easier to wield when also using a large, Zulu-style infantry shield. Or so I’m told.

With suitable materials, this can easily scale up for massive levels of strength. The super-strong Flint (Victoria N’Gengi Santini) has occasionally used a custom-built knobkerrie with a slightly flexible haft.

This “hardwood African knobkerry” was once for sale on the-saleroom.com, but it’s long gone. Still, it’s a good piece to show the “step between truncheon and mace” business.

Longer than a truncheon, but not as long as a quarterstaff. So, about 90cm or three feet.

This corresponds to many designs. Including riot batons or the Japanese hanbo (“half-quarterstaff”).

Walking sticks, canes, full-sized shillelaghs, etc. can also be stout and heavy enough to classify as a medium staff.

Cane-fighting exists as a formalised martial art in various countries, including Japan and France. For instance, Arsène Lupin knew and used cane-fighting techniques.

The additional length over your basic truncheon allows for better space control. And there’s enough length to use different grips and strike harder.

Medium staves also have the advantage of being usable with sword techniques. They can thus be used to transmit fencing knowledge in settings where swords have become illegal.

Teaching swordplay can also be done using wooden swords. These would be considered a medium staff, if broadsword-sized. The Japanese bokken may be the most common example.

Famously enough, master Japanese swordsman Miyamoto Musashi once carved a wooden sword/bat thing from a rowing oar. Which he then won a sword duel with. But most people would be better-served with a katana.

Have a maquila, veh nees merah

One notable form is the Basque makhila. This is a robust, studied walking stick with a pommel and a hand strap.

Makilas (or makhilas, or maquilas…) are often decorated. They can symbolise adulthood, status, occupation, etc..

The bottom is steel-shod for balance, which allows it to hit as a reinforced club.

In case of a bigger problem (the traditional if unlikely example being wolves), the handle can be quickly unscrewed to expose a steel spike. This forms a short spear.

Robust medium staff (skilled use) [BODY 04, Enhance (EV): 01 (cap is 05), Enhance (Wrestling/Grappling EV): 01 (cap is 06), Descriptor: Blunt)]. When fighting a person with a significantly shorter melee weapon, that opponent receives a -1 penalty to their final roll when attacking the Skilled Use medium staff wielder.

Makhila (skilled use) [BODY 04, Enhance (EV): 02 (cap is 06), Insta-Change, Descriptor: Bludgeoning, Piercing, R#3]. When fighting a person with a significantly shorter melee weapon, that opponent receives a -1 penalty to their final roll when attacking the Skilled Use medium staff wielder.

By contrast, here’s a recorded bujinkan class about hanbo use. This specific class puts less emphasis on using the stick as wrestling aid than usual, and is more about getting a sense of strikes. 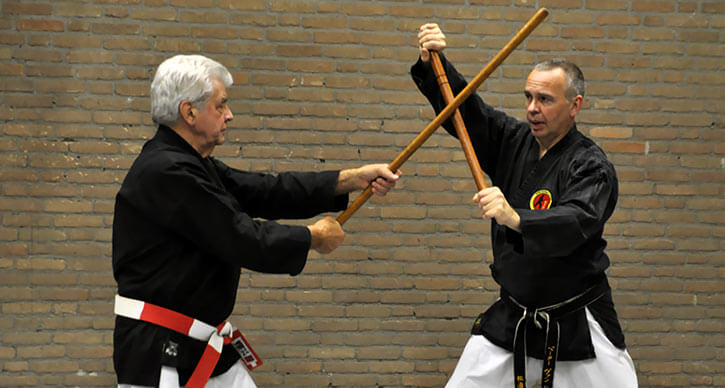 A picture of a hanbo by itself isn’t thrilling, so here’s a photo taken at a Shotokan dojo in the Netherlands  .

Typical bokken. It’s a wooden katana, not much to it.

A suitable weight (a “shot”, as in “shot put”) at the end of a rope, wire, leather wrap or similar. You swing it into the uncouth personage who called your mum names. It can also be a projectile in a pinch.

Slungshots are chiefly associated with sailors, who know a fair bit about ropes and weights. It spread to the likes of dockers and longshoremen.

There are accounts about Great Depression era (the 1930s one) hobos wielding slungshots.

DCH Well-made slungshot (or suitable, robust chain) [BODY 02, Enhance (EV): 02 (cap is 05), Descriptor: Bludgeon]. A flail receives a +1 to the final roll total when attacking a shield-wielding target. But melee opponents with a medium melee weapon get a +1 to *their* final roll against a flail-wielder who doesn’t have a shield. 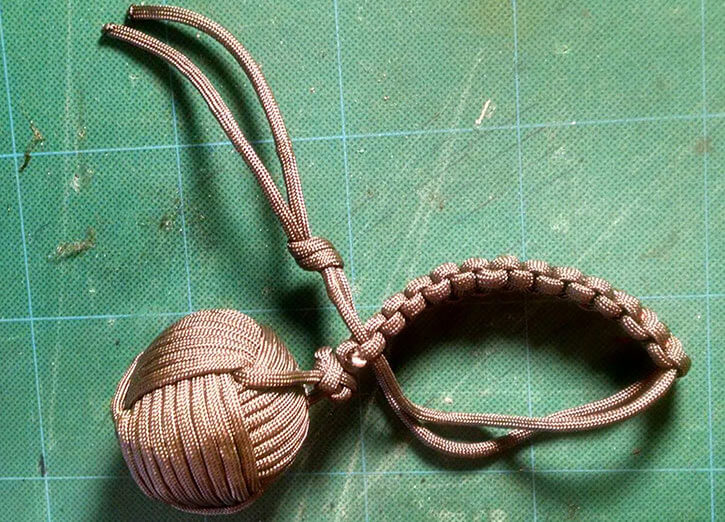 A sailor-style slungshot made using a knotted rope. This one uses modern paracord rather than traditional hemp, hence the shiny texture. 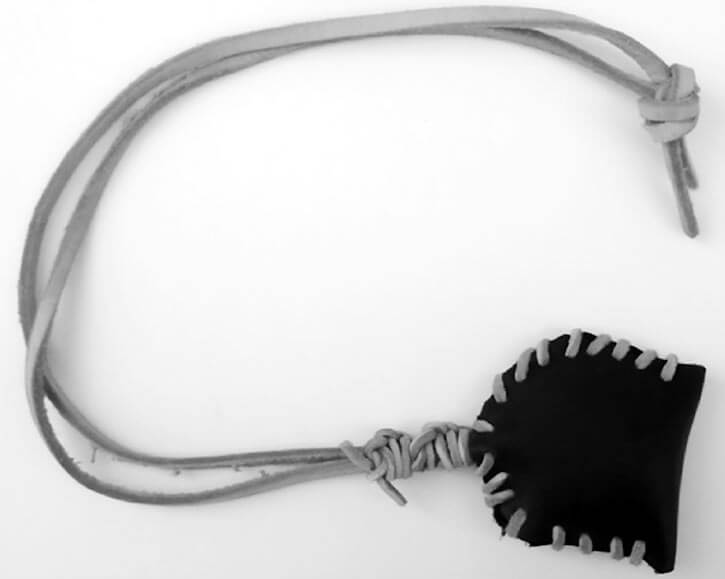 A slungshot made using a laniard and a leather pouch to hold the shot. From this blog  .

A single-tailed, long whip made of leather. It’s normally used to herd cattle. One cracks the whip near the animal, which serves as an order/threat to go in the other direction.

Much of the fictional footprint of bullwhips as weapons and adventuring tools come from Indiana Jones movies. Plus some versions of Zorro, and Castlevania games’ Simon Belmont.

Such bullwhips are commonly 2+ metres long. This range is useful when handling large and/or dangerous animals.

For adventurers, it also offers much improved reach to grab things. Such as snatching the cursed statuette out of the hands of the evil priest, or latching to an overhead beam as the trapdoor opens underneath. Y’know, a Tuesday. 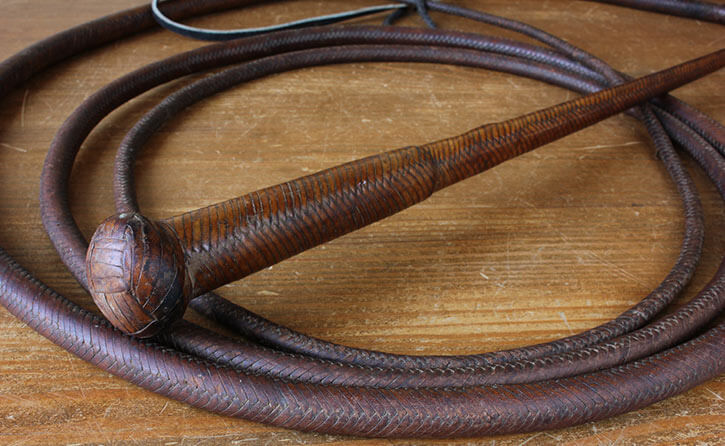 These have their own, elegant article from a more civilised age.

The Fallout melee weapons also live in their own article.

By Sébastien Andrivet and Kevin Berger.