Our general weaponry articles do a Pareto . The “common” articles list what 80% of characters use, and the “special-purpose” list the rest.

This article is a repository. That is, we add weapons to it when the need arises, rather than attempt systematic coverage from the get-go.

Emeicei, sometimes rendered as emei daggers or emei piercers, are named for Mount Emei  (峨眉山 – you might remember the last ideogram from our entry about Chinese mountain scale mail armour).

They are still used in some wushu forms.

These are essentially sharpened metal rods that end in arrow-like points, mounted to a metal ring used to spin, manipulate, and conceal the weapons.

They are typically used in pairs. Emicei are wielded to poke or stab, often with the element of surprise.

The Japanese suntetsu is similar.

A slim steel spike, with a screwdriver-like handle. Similar tools exist in woodworking. And some slim medieval rondel daggers are almost like ice picks.

These tools were used before refrigerators. Back then, perishables had to be packed with ice. Which means that somebody had to break the blocks of ice so they’d fit with the product within the ice box.

Being widespread, these tools often ended up used in street or domestic violence. They excel at assassination, when stabbing by surprise at a vital bit. It can also pierce through a human skull, which isn’t easy for a light weapon.

Or a cartoon cat’s skull. Comix character Fritz the Cat, by Robert Crumb, met his demise in this way.

The medieval versions are also good at striking death blows (coup de grâce) through chain mail, or even through the chinks, eyeholes, etc. of plate armour.

This is done to finish off a mostly incapacitated armoured person. Perhaps after battering them with blunt weaponry such as a mace, or unhorsing them with polearms.

This type of medieval dagger is often called a miséricorde (“final mercy”). 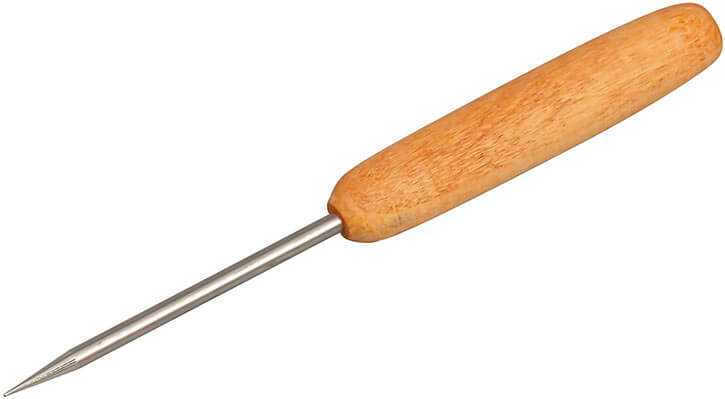 A butchery tool to hang carcasses, move large pieces of meat (say, on a farm), etc.. It’s a steel hook, larger than a hand, jutting from the middle of a wooden handle.

I’d assume that there are similar nautical tools with nonsensical names, because sailors. And some weird kung fu weapons.

These have ended up being used in street fights. Back when they were a large, manpower-heavy industry, young butchers could be a rowdy lot.

It’s not a super-convenient weapon. A lot of its value instead lies in intimidation. It looks scary, yes ?

This “meat hook” is actually a cheap foam accessory, for Halloween disguises and the like.

For ESL  folks, it’s the kind that was used before safety razors. Safety razors started becoming common in the US in the 1920s. And the nefarious French introduced disposable safety razors during the 1970s.

Razors are fragile blades, but they can perform focused incisions. Their uses (at least in fiction) are thus :

In fiction, straight razors tend to be associated with vicious, sadistic characters. Quite often with a racist angle.

In the real world, some capoeira styles retain it as one of the taught weapons. As do various prison violence techniques.

DCH Heh. Razors wholly rely on elements that DCH doesn’t do – called shots that aren’t +2CS difficult (though Blindside helps), blood loss, pain/shock, disabled body parts… A whole lot of new rules would be necessary.
If you wanna dig, the Injury to a Limb material and the Limited Penetration Limitation.

A DOVO straight razor from this cutlery shop .

A military fighting knife whose handle doubles as robust brass knuckles. It’s not unlike smaller types of a cutlass with a heavy hand protector.

The traditional example is the 1918 Mk1 US Trench Knife. It mates the Avenger military knife from France with an intimidating knuckle duster. Plus a small spike on the pommel.

Another example — that I remember from old Punisher armoury comics  — is that tanto-style piece by reputed knifemaker Dr. Fred Carter.

This WWI design is meant for very close quarter fighting in poor conditions. Stealthily raiding enemy trenches could only be done in the dead of the night, the terrain was often muddy and slippery, and any fighting would likely occur within grappling range.

A trench knife therefore remains firmly in hand thanks to the finger guards. And it can be used to strike even in confusing situations where nobody can see what they are doing.

Plus, it remains useful even if the blade breaks.

This is an exaggerated version of real-life leather + Kevlar gloves. Say, the LawPro Slashguards in the photo below.

These are used by police and some workers to manipulate cutting materials (broken glass, etc.) and possibly defend against small blades.

The exaggerated version can catch even most swords in mid-swing, and has a pocket of lead shot over the knuckles.

Batman (Bruce Wayne) often uses similar gloves. Because he is the night. He is vengeance.

A small, hard, heavy object held in your fist to make it heavier and to keep your fist formed correctly to reduce the chance of injury.

Some characters use rolls of coin for that. Of course, as the last punch is thrown and the fight is won, the paper container finally rips open and the coins fly off in slow motion.

It isn’t as efficient or protective as brass knuckles. But it’s smaller, and doesn’t look like a weapon.

Photo of a Todd Foster palm sap found on a long-defunct blog .

This is usually a climbing carabiner, with the inner loop being slightly broader than your palm.

Aside from mountaineering, it is commonly used to keep a mess of large keys readily accessible on your belt. For historical reasons, this also became a signifier of gals being pals.

One variant is a stout leather belt, with a large buckle. It is wrapped around the hand, with the buckle atop.

These are clearly not as efficient as actual brass knuckles. But it could feature in very low-powered stories. Especially those that precede widespread self-defense sprays. 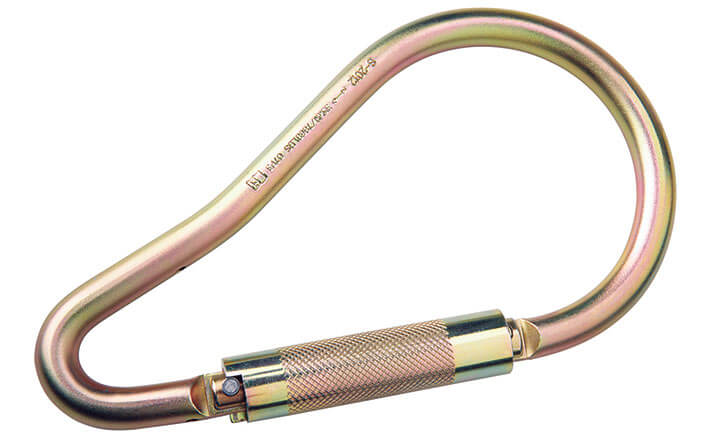 These are long gloves made of a latex-like substance that becomes rigid and steel-hard on impact. Then quickly softens back to its normal state.

Such weapons have all the advantages of sap gloves but do not impair manual dexterity. And they can be used to parry blows. Plus, the material can be fireproofed.

The main example of this is the “karatand” in John Brunner’s classic sci-fi Stand on Zanzibar . But the Knights in the 1980s run of DC Comics’ Checkmate also had a uniform using it.

A semi-flexible weighted short baton. It often looks a bit like a beaver’s tail. Key components :

A sap can also be improvised by, say, filling a tube sock with wet sand. And some models are disguised as large coin purses.

That the weapon is somewhat flexible allows it to store then release kinetic force when swung. And the front-loaded weight allows for bone-breaking blows.

On the other hand, one loses the fine control and multiple uses that a baton can allow.

On the gripping hand, blackjacks are shorter than an equivalent truncheon, and easier to hide under clothing.

Saps frequently include a hand strap.

The niche isn’t unlike brass knuckles. You can carry it around, and if you have to hit somebody it’s markedly more efficient and safer than punching.

Ideally, such a strike (or rather, series of strikes) is done by surprise and to a sensitive area. Say, under the jaw or onto the clavicle. It’s a “end the brawl before it begins” weapon.

Saps were common during the XIXth century, and most of the XXth. People expecting to get into pub brawls, street violence and police violence carried them. They did show up in a number of pulps stories, dime novels, Golden Age  comics, etc..

Victorian muggers (“sandmen”) would also use saps to knock out their victim from behind.

A sort of weapon-grade riding crop. A good example is the French nerf-de-bœuf (sometimes jonc).

Originally made from a dried bull penis, later forms were built using tendons from cattle, woven together as a heavy rod (about 15″ long) and then left to dry. Shorter models will have a weighted end.

Such a weapon is wielded much like a truncheon. But it bends backward when swung, then forward when hitting something. The blow thus merges the characteristics of a light baton strike with that of a heavy whip hit.

Hitting a random hard object with a nerf-de-boeuf produces a loud, intimidating impact.

It has been used as a scourge-like punishment tool. But was often found in the hands of police, street thugs, butchers and cattle workers, etc..

It’s easy to conceal in a jacket, down your trousers (fittingly) and the like.

A higher-tech equivalent is the spring cosh. It’s shorter, but heavier, and it uses a steel spring with a weighted end rather than dried ligaments.

It’s sometimes called a blackjack. Since what “a blackjack” means tends to vary across space and time.

Pulps-era “hotel detectives” or the interwar German police are notable users of spring coshes. Like nerf-de-boeufs, it inflicts scary and painful blows that rips skin, but are unlikely to break bones or inflict fatal wounds.

A varnished nerf-de-bœuf once auctioned at the Hôtel Drouot .

A yawara is simply a small handle held in the fist. It protrudes by about an inch both at the top and the bottom of the palm. Some are dumbbell-shaped, but being pen-shaped is more common IME. There’s often a small loop of string for retention.

“Yawara” is the Japanese name for the concept ; this weapon is usually seen in jujitsu practice. “Pasak” is Filipino. “Kongo” is the term used by the most famous fictional user of this weapon – Modesty Blaise.

This small tool is used within grappling range. It is used for :

Essentially, it’s a pain and force multiplier for very close range “unarmed” strikes and locks. But it’s not that useful if said techniques aren’t mastered… except as a fist load.

Garrote (or garrotte, depending)

A piece of wire, preferably with handles near the end. It is used from behind and by surprise – wrapped around the throat to strangulate.

It is chiefly an assassination weapon, though it also sees use for sentry removal. Though from the sentry’s POV, the difference is slim.

Improvised garrotes usually lack handles. They can be as simple as a telephone cord or a suitable tie. More professional garrotes use the likes of steel wire, piano wire, some types of fishing wires, etc..

As with razor blades, garrotes can be sewed inside clothing for concealment. For instance, DC Comics’ WWII Mademoiselle Marie had a garrote hidden inside her red beret. The kind you find at a Résistance store.

Game stats for fictional garrotes aren’t super-impressive. This is because in pop fiction, strong characters can easily snap necks with their bare hands. Which is usually depicted as faster and deadlier than using a garrote.

DCH Improvised garrote [BODY 02, Enhance (STR): 01 (cap is 03), Limitation: Enhance only for Grappling Manoeuvres, and only when doing a Blindside Attack from behind)].

DCH Professional garrote [BODY 04, Enhance (STR): 01 (cap is 04), Limitation: Enhance only for Grappling Manoeuvres, and only when doing a Blindside Attack from behind)].

Custom-made garrotes for affluent assassins can raise Enhance’s cap to 05 or even 06. But they are certainly not standard equipment, and garrote-using killers often aren’t that beefy. Mind, writeups.org has many exceptions — Mister Phun, Janissa the Widowmaker, Mister X, Ravan servant of Kali, etc..

Photo from the Museum of World War II .

A small vial used to splash somebody’s face with a liquid corrosive (say, vitriol), by surprise and at close range.

It’s not unlike a defence spray, but — as Harvey Dent can attest — the burns are actual tissue damage.

DCH Vitriol to the face! [BODY 02, Acid: 03, Ammo: 01]. This assumes a stout container (to avoid accidents) that gets refilled between uses.

By Sébastien Andrivet and Kevin Berger. 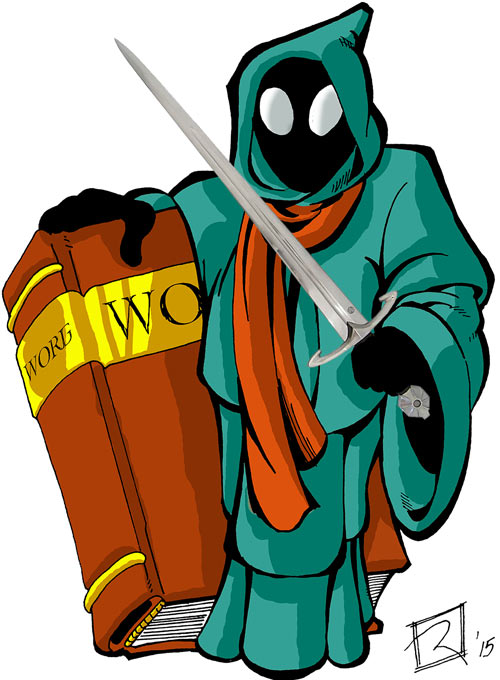