Ruby was a minor character in the Comics’ Greatest World, a new super-hero comics line from Dark Horse during the early 1990s. The book she was in didn’t have much of a chance to bloom before the market crashed.

For context about her team and setting, we recommend first reading the Grace character profile.

Ruby’s skin will disintegrate whatever touches it.

However her whole body is covered with a ruby-coloured coating that blocks this power. She can fluidly retract at will, thus exposing her bare skin and disintegration powers only when needed.

Ruby generally attempts to touch and disintegrate her foe’s weapons. Or the things they’re standing on, if they’re not on the ground. She’s not really a killer.

Another common trick is to block an incoming projectile with her naked hands, thus disintegrating it before it can cause her any damage.

Ruby arrived in Golden City one day to join Grace’s Agents of Change, having been recruited by Grace’s people. She mentioned that her deal with Grace was she would help her to be rid of her powers.

The day of her arrival was the day when US Armed Forces agent Warmaker escaped from his prison. This roused the general anti-Washington feelings in Golden City and prompted Grace to secede from the United States. Despite some whining about only being a temp, Ruby was made a member of Grace’s Agents of Change and stayed with the team. 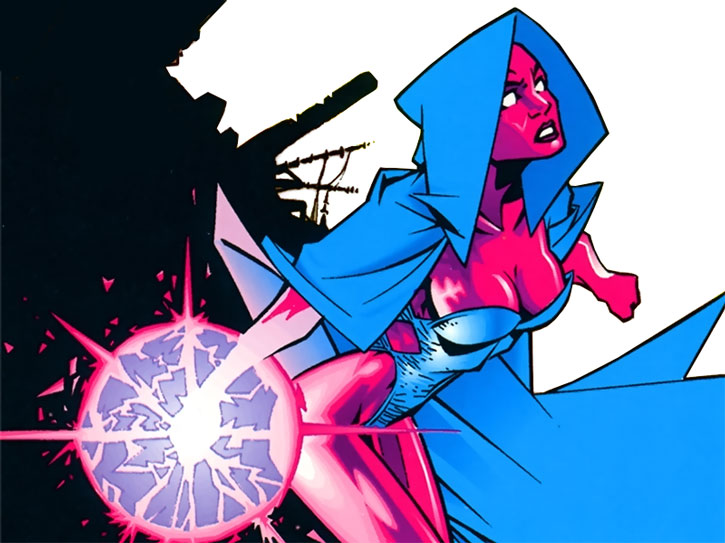 When Grace was reported dead and Law took over, Ruby quickly became Law’s lover. She discovered he could touch her without being disintegrated. However, he treated her poorly and was abusive.

Her fate after Law died is unrevealed.

Ruby is a young and angry woman, who considers her power a curse. She’s apparently from some inner city.

She’s a bit gung-ho and not very mature, not taking well to disappointment. Still, she’s not really the assertive type, and didn’t question Grace’s rule like Titan or Warmaker did. She’s content to be a follower.

Law was quite a problem for her. She was won over by his charisma and he was the only man who could touch her and have sex with her, but he treated her like trash. Still, Ruby couldn’t bring herself to leave him.

“You’ve got a pretty tough hide on ya, ugly… but these hands dis anything.”