He’s a good character to have available for stories, both as a martial artist and as an ex-agent type.

Carter is a competent spy, mercenary and private eye. He’s smart and has significant experience in the field.

He also is a full-contact karate and kickboxing champion. Shang-Chi himself thought that Carter’s technique and fighting performance were exceptional. ”Super-Midnight” Carter can reliably beat up several street thugs.

He is in superb physical condition.

Rufus is missing an eye. Still, he has taught himself to overcome most hindrances of the monocular life.

However he cannot fully compensate for the reduced angle of vision on his left. Carter can thus be surprised by assaults from that direction. 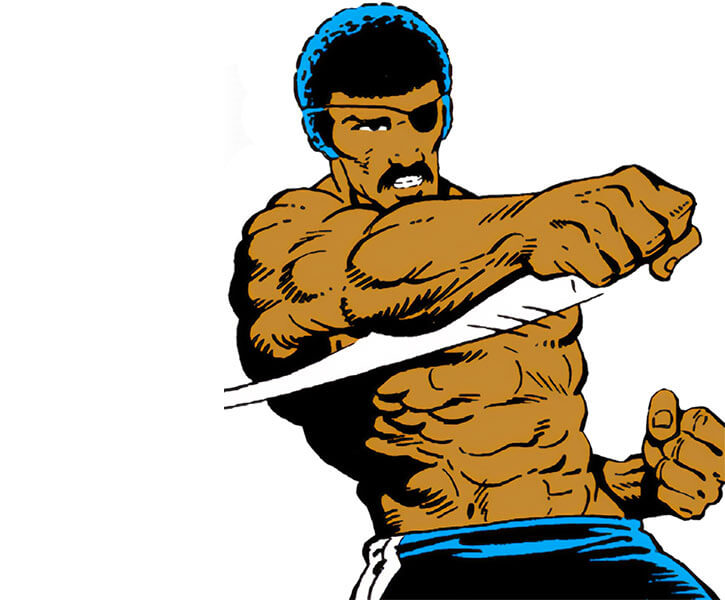 Though born and raised in Philadelphia, kickboxer Rufus Carter moved to the UK to finish his studies. He loved living in London, and joined the British competitive kickboxing circuit.

Carter was then recruited by the CIA. His track record made him their main man in London. He was reliable enough to be entrusted with volatile missions – say, in Israel.

It is presumably on a 1970s CIA mission that he lost an eye. The official version was that it was the result of a boating accident.

Carter trained to fight with but one eye. He then returned to the kickboxing tournament as “One-eyed Carter”. To the amazement of the fans, he handily won the 1981 championship.

At that point, the CIA was trying to involve two freelance operatives, Shang-Chi and Leiko Wu, in a London operation. The goal was to deny data to Yugoslav intelligence agents.

An undercover agent arranged for Shang-Chi and Leiko to be at Carter’s big championship match. Carter sold them a story about operating an antique shop on the side and having problems with extortionists.

The op ultimately was a success, but :

Incensed, the greater-than-life Carter burned his CIA ID card and left the Company.

Shang-Chi had come to appreciate Carter’s outrageous jive act and sincerity, and they remained friends. 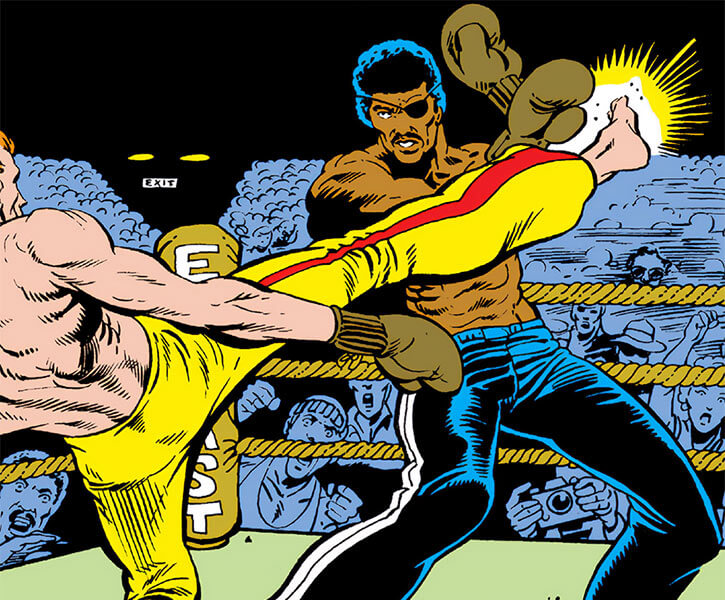 Carter was still concerned about one of the last missions he had undertaken for the Company. Back then, he had uncovered a plot to blow up an ammunition shipment in the Aberdeen harbour. That was apparently a Libyan plot to deny resources to the Israeli military.

Carter’s investigation had already cost the life of a Palestinian informer. And the American had been forced to kill the assassin in turn.

Carter contacted his CIA ex-handler to make sure that, as the date of the Libyan strike approached, his former colleagues were ready to act. However, the CIA had decided not to intervene.

Mr. Carter was determined to act on his own. But a clash with his ex-handler left him with a bullet wound to an arm. Now needing help, he contacted Freelance Restorations, Shang-Chi’s employer.

The two men derailed the Aberdeen plot without further death.

Carter then became a private eye. Perhaps he wanted to polish his John Shaft act.

Though it took a while, Carter found a client – laird Jock McBride.

The Scotsman was in danger of having his land stolen, since a cache of gold was allegedly buried there. McBride, an eccentric kickboxing fan, was happy to hire One-Eyed Carter.

Since Shang-Chi was close to the laird’s turf, Carter teamed up with him. They stopped the bad guys, and Carter nobly refused payment.

Alas, “Super-Midnight” Carter then vanished in comic book limboWhen a character still exists, but hasn’t appeared in comics for years. Mostly because Master of Kung-Fu was cancelled a few months later.

Rufus Carter was glimpsed again in 2019. He was among the persons kidnapped and mind-controlled by Emila Vachon, so she could fight and kill them at her leisure.

The mind control was eventually broken by the Daughters of the Dragon, freeing Mr. Carter and the others.

In 2019, he no longer was missing an eye. There’s no further information.

He’s completely open about it being an act. He hams it up and chews the scenery for fun.

As “One-Eyed Carter” he’s a constantly jivin’, rappin’ cool cat who knows everything about life. He keeps making spectacular, dramatic statements and soliloquies. He’s on a roll, babe !

Carter’s got great delivery and charisma, and is a constant one-man spectacle. And his jive-talkin’ can easily be understood by even the squarest White square – it’s not real slang.

He usually calls himself “the champ”, refers to his male buddies as “babe” as was the style of the day… and never ever shuts up. 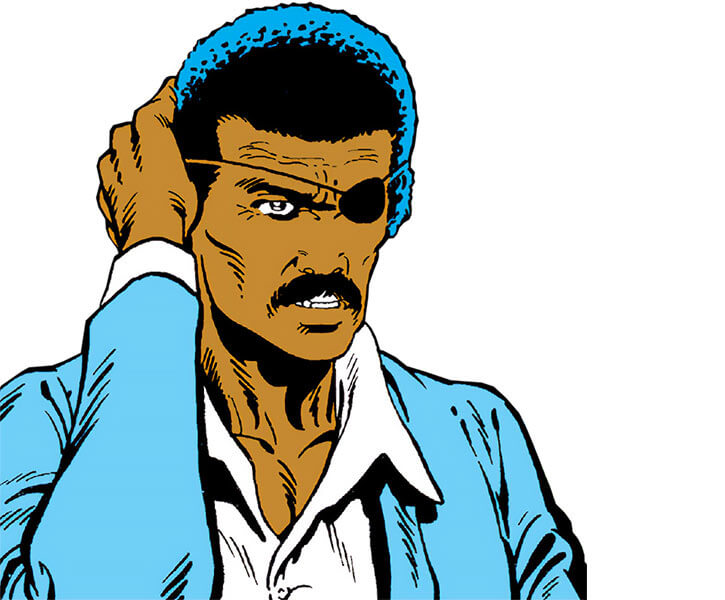 Mr. Carter is highly ethical. He won’t do evil or treacherous stuff. As soon he realised that the CIA wasn’t the “class act” he hoped they were, he dramatically burned his Agency card.

He shows impeccable sportsmanship against all odds, is a rock-solid friend, and empathises with the innocent. Rufus will occasionally turn down financial rewards he needs if he feels that the client can’t afford to pay.

He’s a bombastic, laid-back maverick who makes his own rules but has a heart of gold behind all the bluster. So, yeah, very much a blaxploitation  character. He’s got style, he’s got panache, he’s a ladies’s man, he’s great with words and blabbering, and he’s a real champ.

When things get tense, Carter drops the jive. He’ll speak mainstream English – though he’ll still say a lot. He likewise code-switches when with his taciturnNot speaking much buddy Shang-Chi. Though he still makes sparkly but one-sided conversation.

Carter’s most famous win was marketed as the “Super-Midnight” nocturnal match. Since then he prefers to do risky stuff at midnight, his “lucky hour”.

He constantly makes reference to the “super-midnight”. Which feels forced since it was a private joke by the writer. But that’s part of his brand.

(A typical “One-Eyed Carter” tirade) “I can see you’re lookin’ at my eye — what used to be my eye — and sayin’ to yourself… how is that that a dude with only one lamp can rise against all odds to become the Super Midnight champ of England, right babe ? Well, Brando an’ his One-Eyed Jacks  ain’t got nothin’ on Rufus ’Super-Midnight‘ Carter, cuz I found out it’s all in the mind — in two ways. The feeling of inadequacy — the lack of depth perception — that in itself is all in the mind, because the mind has been trained for two eyes…” (blah blah tirade continues for about twice as long)

“You got it, Miss Wu ? Fantabulous ! Beautiful ! Now listen — since last night was such a super midnight, why break the string ? I’ll pick you up at eleven — that’ll give us one hour before we hit ’em !”

“But I don’t like bein’ played for a sucker — on no account other than lack of trust. That’s the trouble with this spy game. To work at all, it’s gotta be built on lies. Me, myself, I didn’t see through the big lie at all. Both eyes were blind. But never again. My eye has been opened, babe. I just quit, don’t ya see ?”

“I’ve been ee-normously successful, babe ! They’ve taken to calling me ‘the ebony bond’. Ain’t no assignment too perilous for the private eye with but one eye — but what an eye ! ”

“That’s right, scum — and I’m even blacker in the dark ! But not nearly as black as the place you two are going to visit… namely — the land of the super midnight !” (HWOK ! FHWUMP !)

This is the comic books of the 1970s. So all Black people should somehow know each other no matter how improbable that is. Which means that he’s a friend of Ben Turner.

MPR (Missing his left eye), Secret ID (His mercenary and espionage activities, before he quit the CIA).