Rufus, although not very bright is a skilled martial artist. He was good enough to win the Midwest martial arts championship.

He’s also talented as both a biker and singer.

Fighting freely with his self-taught kung fu, the self-proclaimed Pan-American number one fighting stylist regarded Ken Masters as an intense rival. Thus, Rufus challenged Ken to fight for the plain sake of to see who was stronger. Jumping to conclusions, Rufus frequently mistook random martial artist for the elusive Ken.

Rufus in his SF4 opening read in the newspaper that Ken was the strongest fighter in the US. ”Absolutely not !” he bellowed. He was and he would prove it to the world. His girlfriend Candy suggested that they fight on live TV so that Ken would be publicly shamed.

Rufus happily agreed and swore that Ken’s days of fame were numbered.

Rufus mistook just about everyone blond for Ken. But he most likely did run into the real Ken, judging from their identical rival battle scenarios. Even if Ken actually mopped the floor with Rufus, his ending had them meeting up yet again. This occurs as Rufus plunges ahead across the desert on his bike with Candy at his side. And then once more as the bike got stuck. 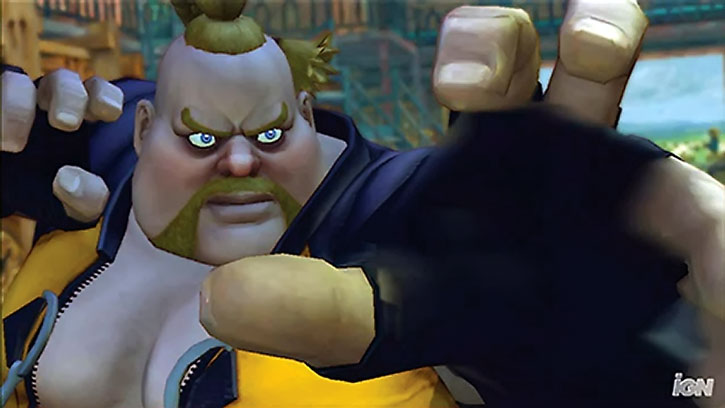 Candy lost her hat to the wind so Ken replaced it for her as he pulled up to them, and offered them a hand. Rufus was about to blow blood vessels from his pushing the bike and refused, insisting that it was training as well. But as Ken left Rufus convinced himself that Ken must have sabotaged his wheels beforehand.

Where he is now

Still with Candy and trying to get even with Ken. Will SSF4 actually have him succeed ? Time will tell. 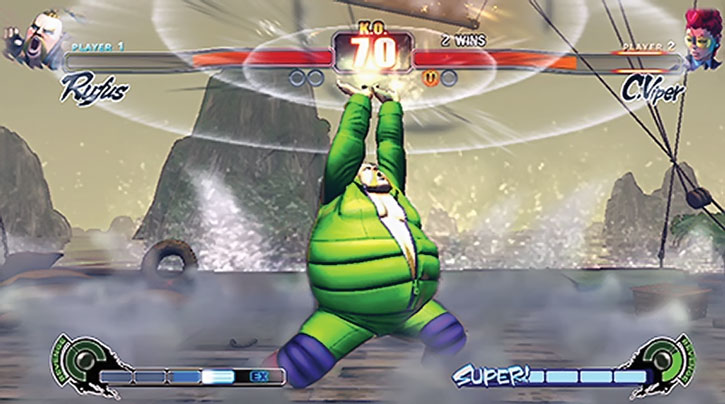 Rufus is a giant tub of lard. But he moves surprisingly fast for a man of his size and build.

He typically wears a yellow and black skin tight sleeveless jumper that looks like it’s about ready to be ripped apart by his flab.

The back and sides of his hair are shaved and the rest of his long blond hair is worn in a single braid. He can frequently be seen making goofy faces while loudly boasting about his abilities and sexiness. He is quite fond of making the “I’m number one !” gesture. 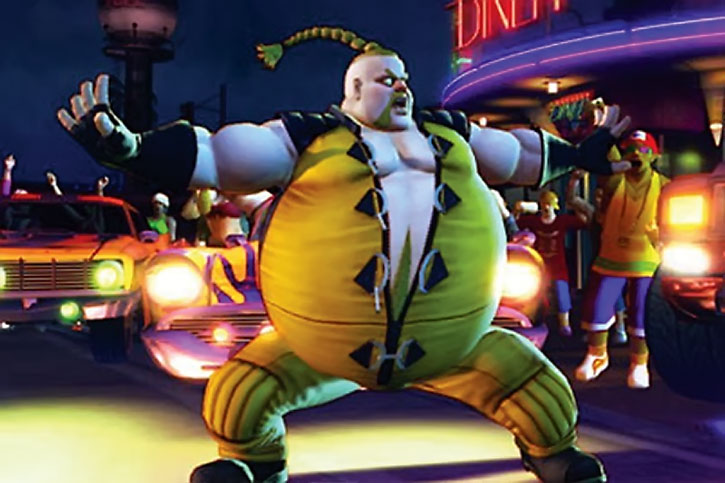 The story pretty much tells it all. He’s an over inflated ego maniac with delusions of grandeur.

Although he’s pretty petty and one dimensional Rufus isn’t a total bad guy it’s just that his ego and own stupidity keep making him look like a buffoon.

“All of you, from what I see this person has been chased, hasn’t she ? The match is her win of course ! You interrupted my speech sometime ago, didn’t you ? There’ll be no gloomy irritating disturbances when I speak ! I myself am a charismatic bike builder and martial artist of biggest of names ! Is it fine for commoners to interrupt Lord Rufus’s words by saying such ill-mannered things ? By no means no and probably for a no good reason. What snootiness is this indeed !”

“I said for the small fry to be silent. Disappear ! I’m talking to Candy !” (The waiter hands him a check.) “What’s this check ? I, I’m getting it ?? To pay the price for a lady’s ignorance is therefore a celebrity’s obligation, isn’t it ? Now then Candy, already ate food haven’t you? Then after eats, how about cocoa also?” 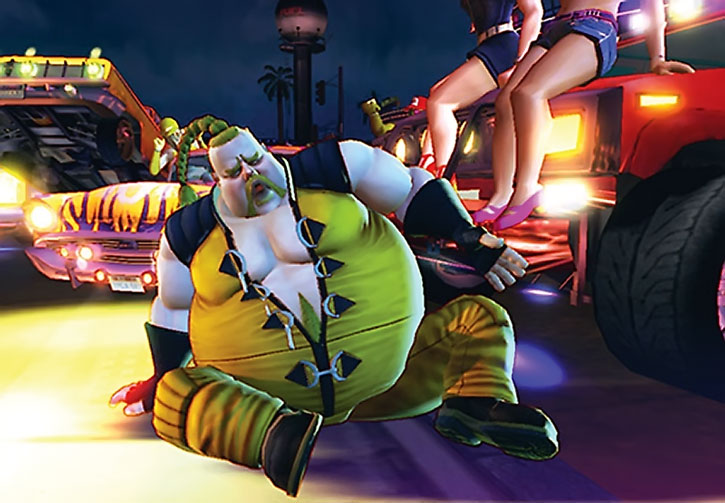 Rufus: “Alright ! I defeated Ken Masters !”
Candy: “Yahoo ! Oh Rufus, to defeat someone before the start of the tournament, it’s so cool !”
Rufus: “Hahhahha, don’t praise me so much, Candy. It feels awkward !”
Candy: “Hey hey, this guy, did he die ?”
Thomas: “Uuh…”
Rufus: “Ah, he survived ! This unkempt blond hair ! No mistake it’s Ken Masters ! You made it toward the end of your rope to walk into a place like this, didn’t you ?”
Thomas: “You, you’re wro…I’m…this Ken you say, not, my name…”
Rufus: “You don’t know when to give up ! What a rascal Ken Masters, how shameful !”
Thomas: “I’m…just a bandman…I…just appear to be…the son of the distinguished Masters family.”
Rufus: “Indeed…from what I’ve heard, the Masters family, is the story of a famous rich man, but no matter how I see it you’re more gloomy than me. No, naturally I with my fashion sense, am popular not just in America, but all over the world. But, even so your jeans, are worn out, aren’t they? If your feel like wearing nicer clothes, you ought to have sparkling shoes, right ? No wait ! What if that’s the craze of celebs…”
Thomas: “My name is Thomas, it’s not Ken ! In the first place, the Masters Foundation headquarters building is no less than 100 km from here. It’s something like the back lanes of a street like this, in which that manager would likely have no reason to be.”
Candy: “No way, 100 km ! That’s too far away !”
Rufus: “Damn, blasted Ken Masters ! Again you produced a double didn’t you ! If we meet at the tournament, you’ll remember this !” 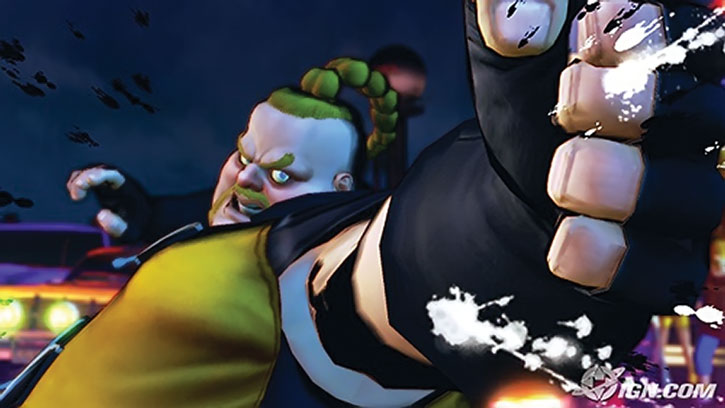 Ken Masters (after stopping on the road to help): “Want a pull ?”
Rufus (pulling a trailer with his own hands): “This is training !”

Rufus could be dropped in dang near anywhere for some comedy relief. He would likely go through the same pattern of trying to find and beat Ken Masters and constantly mistake him for someone else. Jean Paul Valley might make a good replacement although the former Batman is likely to seriously injure Rufus.

It could be interesting watching him try to backward rationalize that he got the crap kicked out of him. Perhaps Ken Masters doesn’t even exist and he’s just a total figment of Rufus’s imagination. Go ahead and have some fun with it! 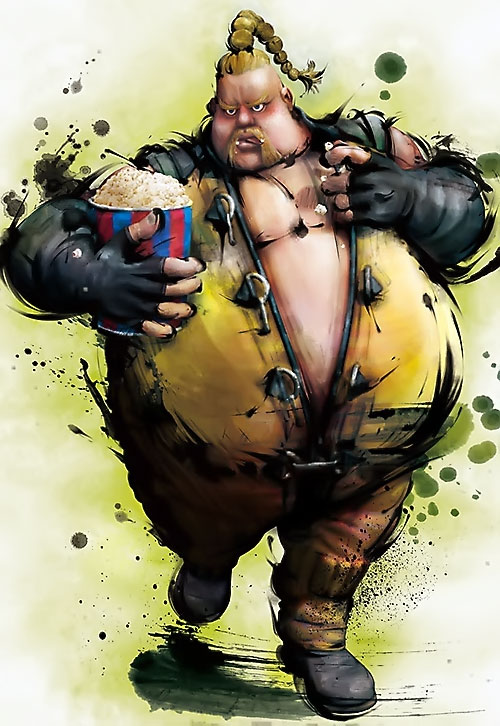 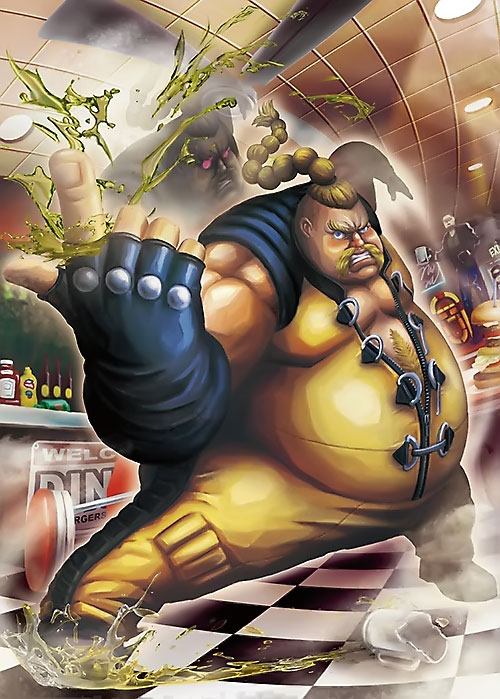