Herr Bernstein is a master villain in the well-established King of Fighters series of brawling video games.

He is of course very evil, and very powerful. He even has his own flying fortress, which he uses to store his collection of the martial artists he’s defeated and coated with metal to keep as statues.

All in all, he’s a very cool villain that could be used as a reoccurring nemesis.

(This is a rather old profile. As of early 2022, it has received another round of polishing and improvements, but it needs another one — Ed.).

Bernstein is an arms dealer wielding shadowy influence on the world’s affairs.

Bernstein can easily replicate even the most advanced techniques he sees. Thus, his combat moves include many of the best attacks mastered by Geese Howard or Wolfgang Krauser.

Bernstein can also channel vast amounts of energy into pretty much any technique.

He later gained Orochi demon magical potency. This increased his power, but relying too much on it will have lethal side effects. 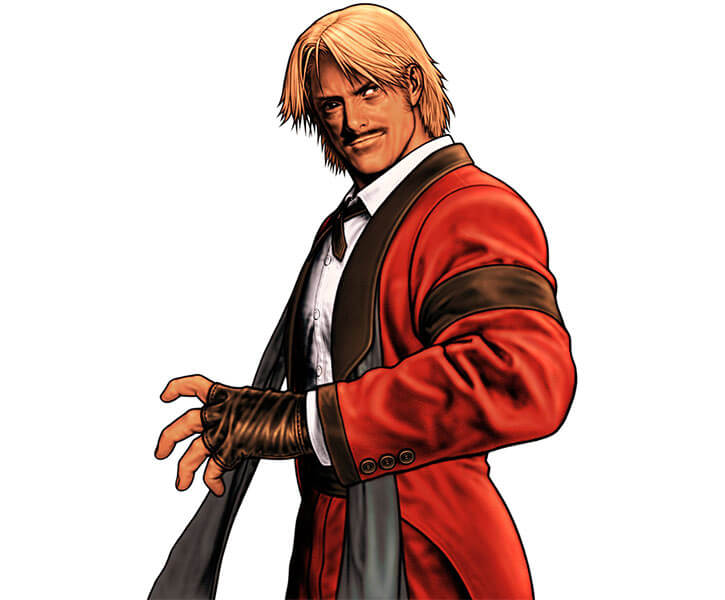 He became Interpol’s most wanted man, but he was always one step ahead of any law enforcement agency.

Many tried to take him down – and died. Some were added to his collection of metal-encased warriors aboard his air ship the Black Noah.

The most infamous incident was when Heidern’s Ikari Warriors tried to stop him.

Once they got a little too close for comfort Rugal paid them a little visit. He single-handedly slaughtered their entire base, including Heidern’s wife and child. Bernstein plucked out one of Heidern’s eyes but let him. He considered him unworthy of being added to his collection of trophies.

This seemingly reignited Rugal’s blood lust. Bored with being the top dog in everything he did, he created a diversion to indulge himself in… 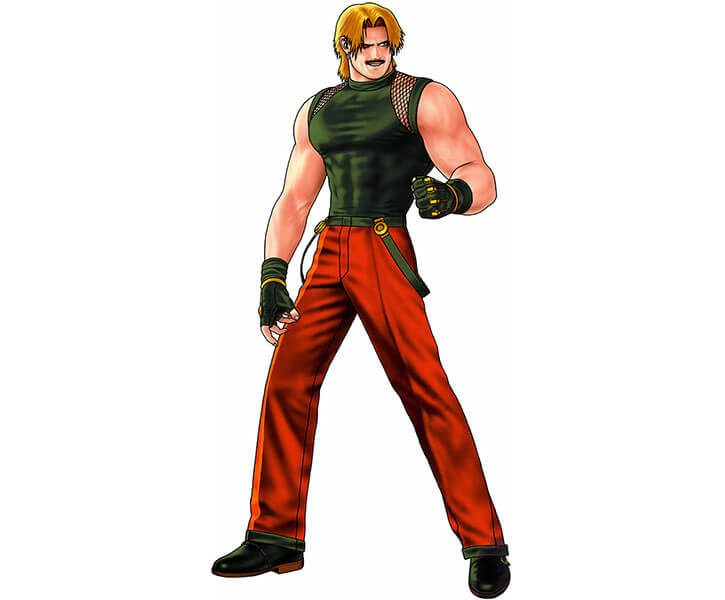 The KoF tournament was announced with new rules. 24 competitors would enter by country, as three-man teams.

Terry Bogard’s Fatal Fury Team was the clear favorite as he was the previous champion who had defeated Geese Howard. But astonishing newcomers Kyo Kusanagi, Benimaru Nikaido, and Goro Daimon — the Japanese Team — came out on top.

The team was then sent a new invitation for their next battle. But they were gassed in the locker room, to awaken on Rugal’s Black Noah.

Their mysterious host greeted them before taunting them with all his metal encased fighters that he kept around as trophies.

The fight didn’t go well for the heroes at first. Rugal easily floored both Benimaru and Goro. Only Kyo was able to stand up to him.

After a furious battle Kyo was finally able to take down the villain. Realizing that he had lost, Rugal triggered the self-destruct mechanism on his ship.

The Japan Team was barely able to escape with their lives. Rugal seemingly perished in the explosion.

Rugal had indeed survived the explosion of the Black Noah. He washed up on a desert island.

A mysterious man then came and taunted him for his failure to defeat Kyo and his team. Rugal lashed out, but the stranger easily swatted him aside and plucked his eye out.

The stranger then imbued Bernstein with some of his mysterious power. He stated that he would need it if he had any hope of defeating Kyo in a rematch.

The following year each team received yet another invitation to the tournament signed by a mysterious “R.” The only real change in the roster was Iori Yagami’s team consisting of Geese’s former henchman Billy Kane and Eiji Kisaragi. These supplanted the famously unsuccessful American Sports Team.

Iori and Kyo had a bit of bad blood going. Their rival clans were jointly responsible for banishing the Orochi demons centuries ago, but their relationship had since soured. Iori’s clan had sold out and allowed the Orochi to return in exchange for power.

Their team did well and advanced to the finals. However victory was not to be theirs. Iori’s proximity to Rugal’s newly enhanced Orochi power caused him to enter the Riot of the Blood mystical rage. He beat his teammates within an inch of their lives. 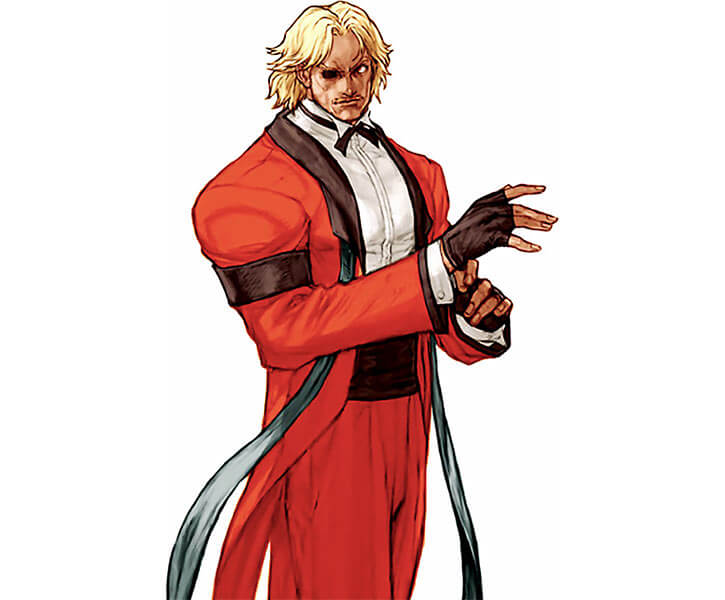 Kyo’s Hero Team once again advanced to the finals. They were summoned to the Black Noah II which had been rebuilt and upgraded from the original.

This time Kyo was in for a major surprise as he was forced to fight his father who had been kidnapped and brainwashed into fighting for Rugal. With a heavy heart Kyo was forced to knock out his father before he confronted Rugal once again.

Their rematch went similarly to their first fight. Kyo and his team were against the ropes early on, but Kyo once again managed to summon his Kusanagi flames. He thus beat Rugal, who once again triggered the Noah’s self-destruct mechanism.

He seemingly perished in the explosion and hasn’t had a canon appearance since then.

King of Fighters ’98 and onward

Rugal was brought back by popular demand for a non-canon dream match in KoF ’98 tournament. Since then, he has had a few other appearances in dream matches, including Capcom vs. SNK.

He still remains a fan favorite and is unquestionably the series most memorable villain. Rumors continue to fly around that he will be making a comeback with practically every new installation of the game. However the reality is with every game that passes the likelihood of him being brought back shrinks.

The closest that fans got to seeing him again came in 2003 and later in KoF XI and XIII. As his son Adelheid Bernstein and his sister Rose tried to avenge their father but failed. 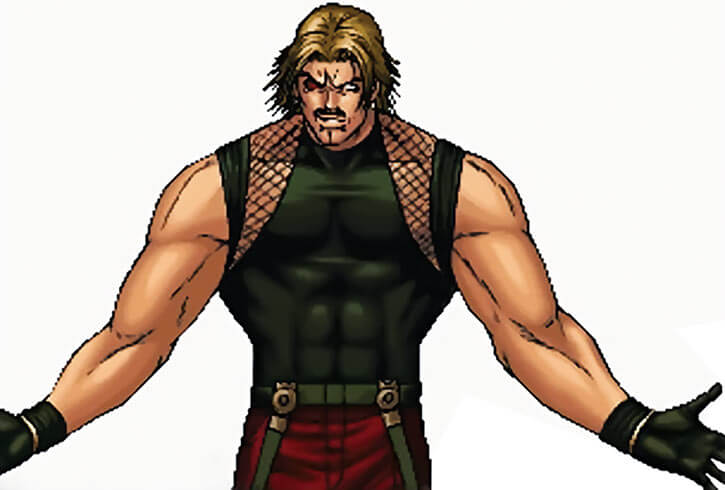 Rugal is a hulking man with a permanent evil leer. He wears a red tuxedo with black leather gloves when fighting. One of his eyes is a creepy glowing red cyber eye.

Later when he returned as Omega Rugal he wore black boots, red slacks, and a black tank top with the same black leather gloves. He was even creepier. His cyber eye was even more obvious and his right forearm was a cybernetic replacement.

He was also constantly surrounded by cybernetic toys and gadgets in his abandoned missile silo. He has a creepy evil cyberpunk genius vibe going on.

Heidern: “You were nothing but a shooting star. It’s fate that you perished.”
Rugal: “Ha ha ha… guess again !”

Rugal can be inserted as is, but like any great villain he needs a hero to oppose. Batman or Green Arrow are probably good choices power level wise.

The Black Noah was a huge flying airship said to be able to move much faster than any commercial aircraft.

Like any good super villain lair it probably had tops of traps, torture devices and other goodies that all great super villains should have just lying around, but alas none of this was ever shown.

At the very least it had a facility capable of coating people with a fine sheet of liquid metal for Rugal to preserve in his trophy room.

It’s also entirely possible, but not proven, that Rugal fashioned his own cybernetic equipment. A 6 APs lab with Gadgetry: 06 with the Genius Advantage would be a bare minimum for this and if that’s the case all would likely be higher. 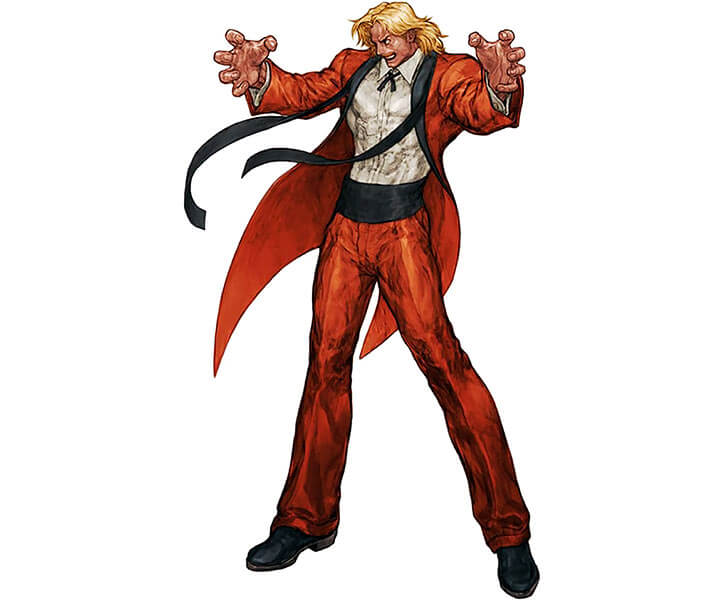 After Rugal was defeated in KOF ’94 he survived the destruction of his airship using the Orochi power and came back the next year stronger than ever.

In addition to these changes to his Power (note he now lacks Invulnerability), up Hero Points to 90 and Martial Artist to 12.

He also had a SPR (missing right forearm), although this was compensated for by a cybernetic replacement.

The Cursed Power of the Orochi

Rugal is also able to tap into the cursed power of the Orochi. However, he isn’t part of the Yagami or Orochi bloodline – so his body can’t handle it.

At this point he is able to raise his Adrenaline Surge at will and use it on any of his Attributes, Powers, or Skills. But each AP means one Killing RAP inflicted

For every AP Adrenaline Surge is raised above 3, its R# of 2 increases by one. If he fails this reliability roll then he automatically takes the full value of his enhanced Adrenaline Surge as Killing Combat RAPs.

After being beaten by Kyo again he tried to draw upon even more power while he was running very low on HP and this is basically what killed him. 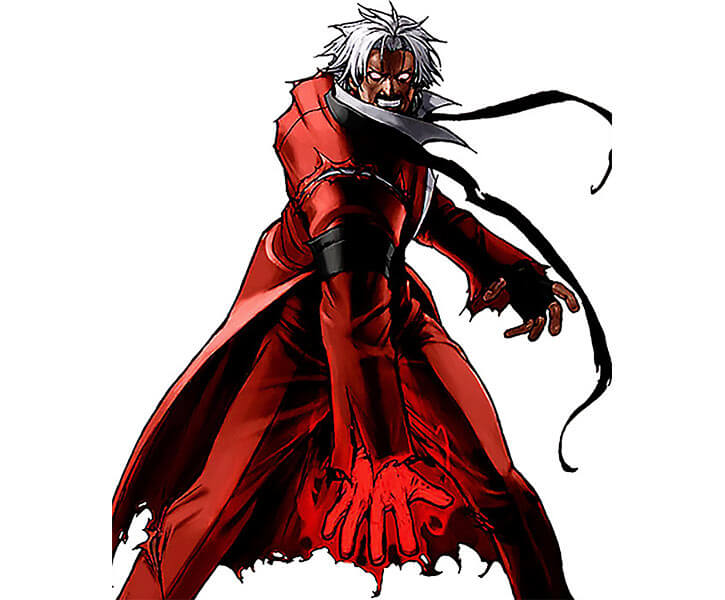 These were dream matches, and therefore non-canon.

Add Poison Touch: 06, which is a Combined attack with Claws and Claws must score at least 1 RAP in order for it to affect the opponent.

Force Field can only be used for one Phase and can be attacked through. Typically what Rugal does is takes an attack (quite often an energy projectile) and then returns an even more powerful Energy Blast the next round. 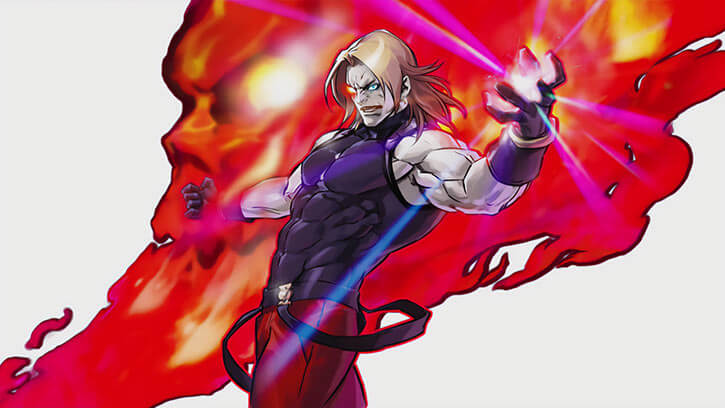 Another non-canon appearance of Rugal.

After he defeats Akuma in the tournament finals, Rugal gains control of his enemy’s power. Invigorated from his win, he decides to test his new found strength on the winners of the tournament.

If the player defeats him, Rugal will be overwhelmed by the Hado power, which creates an entirely new entity. It leaves after declaring its existence in the world.

Same as the previous non-canon version, but even more powerful (that and his tux is pretty ripped up):

He also Pyrotechnics (ML): 08, Seriously Marginal and Range of Touch only. Bernstein is fond of using the as a surprise devastating attack by teleporting in and grabbing the opponent someplace vulnerable. This is a parody of Akuma’s Raging Demon.