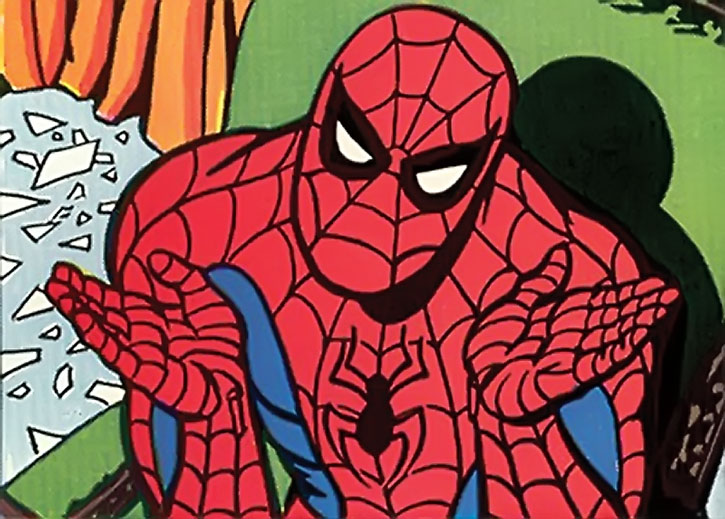 A movement power with this Limitation cannot be used at its full APs in the first phase (as is normal) but has to build up speed turn by turn according to the following formula:

The Acceleration Factor (A) is the exact APs of speed gained by the vehicle in one round of acceleration, calculated using the formulas listed below. An A of 4.6 or higher is a -1 FC Limitation, an A below that is a -2 FC Limitation. This is based on current automotive standards of high performance vehicles being able to go from 0 to 100km/h (60mph) in 6 seconds or less.

The GM may wish to adjust this number depending on the setting. A 1930s pulp fiction setting would probably have lower accelerations in general, while a campaign focusing on jet fighters in the future would have much higher ones.

Example A values are listed below, after which are 2 examples of cars with accelerations in that category and those cars’ top speeds. These numbers are usually based on manufacturers’ statements and may not match with actual tested performances.

Other applications of the A parameter

An ability with this Limitation does not always activate every time it is needed. The Power does not burn out or need to be recovered, it simply fails to start in the first place.

If any initial roll made with this ability is equal to or less than the appropriate Activation Number, the ability fails and cannot be used that phase; In the case of Auto Powers, simply make a roll before use.

This failure still consumes an Auto or Dice Action, depending on the Power or Skill. Another attempt may be tried in the character’s next phase without penalty.

Success means the power activates and is used normally. Auto Action Powers will operate until shut down and re-activated while Dice Action Powers must be re-activated for each use. Minor Activation may not be used along with the Catastrophic Burnout Limitation.

This Limitation is useful for emulating gadgets with stubborn starting mechanisms, or newly empowered characters that simply have no idea how to get their powers to work. Most characters with this Limitation buy it off rather early in their careers.

Always On and Already Factored In — Usage note

This shorthand is frequently employed in writeups.org entries – almost always for Growth, Density Increase (Self Only) or Shrinking. It means that the core effects of Growth have already been factored into the stats – STR, Physical RV, movement rates, Physical OV.

Aspects of Growth that are not part of a character sheet (possibility to do Sweep Attacks, reaching the top shelves, being easily spotted, etc.) are handled normally. But use the numbers provided for everything else.

In an entry where Growth is noted as being Always On and Already Factored In, the Growth Power is thus largely cosmetic, telling how large the character is in APs but not playing much of a role otherwise – since everything is already factored into other characteristics.

This Limitation simulates armour-piercing attacks by adding 02 APs to the EV but dividing the total RAPs gained by 2 (-1FC) or 4 (-2FC).

Designer’s notes: This was phased out in favour of the Sharpness Power.

A power with this Limitation is not an individual ability. Rather, it is a side effect or special use of another Power the character possesses. It is much like a Trick Power, but one that the hero uses so frequently they no longer need to make a Check or pay HPs to do so.

When a power is assigned this Limitation, the player also selects a “main” Power which this Power is Contingent on. The main Power must be of equal or higher APs than this power.

Example: A speedster  has Superspeed: 18 and Air Control: 07 (Contingent on Superspeed), representing his ability to move so fast he can create vortices and whirlwinds. He can use Air Control freely so long as he can use Superspeed.

An opponent uses his Neutralize: 16 power on the speedster. He can’t target Air Control, but he can target Superspeed, which he manages to reduce to 07 APs (about 39% of his original APs). Air Control is also reduced to 02 APs – he can still use it, but it is much less effective at this level.

Designer’s notes: This Limitation was designed to supplement Elemental. While Elemental Linking can do a fair job of representing Powers that are aspects of a singular ability, it was not a fair representation of lesser Powers that were applications of a single dominant ability.

It may be assigned to Auto/Dice powers, but is only in use when the power is used as an Automatic Action. A power may not have both the Focused and Always On Limitations.

An attack with this Limitation receives +1CS penalty to RV when impacting hard metal, hard rock or a similarly inflexible, solid material.

In case of doubt and/or dispute, materials that are sufficiently unyielding to qualify have a 4+ hardness on the Mohs Scale. A convenient table can be found on Wikipedia  – the most salient point being that copper, bronze and brass are too soft to qualify whereas iron passes. Further specific materials can be researched on the Internet within seconds in the unlikely case this becomes necessary.

Force constructs (Force Wall, Force Shield, Force Field, Skin Armour used to model a skin-tight force field…) usually qualify, but the GM might decide they do not if their in-universe description means that fragile projectiles are unlikely to shatter against them. For instance this may be true of force fields that strip incoming projectiles of their mass and/or speed, as in Dune and Mass Effect.

Non-rigid body armour such as most chainmail or most undershirt ballistic vests doesn’t usually qualify, barring a GM call.

Likewise, Skin Armour is routinely used in DC Heroes to perform abstract RV adjustments that have little to do with having an armoured skin. Examples include modelling a vulnerability to energy attacks or representing a Character or Gadget with an RV higher than their maximum BODY Condition so they’ll fold quickly if they can be damaged.

The Mohs scale was chosen because a/ it’s the best-known one and b/ it uses simple numbers. The exact breakpoint was selected so that low-tech games can feature bronze weapons being inefficient against iron armour.

The Limited Penetration Limitation is typically used for weapons that are sharp but brittle, or have a fragmentation/mushrooming effect. Typical examples include broadhead arrows, blades made of low-tech and/or exotic materials (such as bronze or obsidian), hollowpoint bullets and less-than-lethal rounds.

In the simplest case, the Marginal Limitation denotes a Power that requires extra effort, energy input, concentration or endurance to use. In DCH terms, this is represented by an expenditure of Hero Points before the Power can be used.

Once the fee has been paid, the Power is active during the current scene (or 8 APs of time if you don’t like the concept of a scene).

In more complex cases, Marginal addresses the issue of Powers that a Character is documented to have, but are not used as often as it would be rational for them to.

It may be that the writer forgot, didn’t pay attention or didn’t want that Power in the story (perhaps because it would disrupt the plot). But it could be the character who lacks focus, or lacks an understanding of their powers. Or perhaps it is the Power itself, who is presented as a Big Deal to be used only in the direst circumstances.

When modelling a Character, if for a given ability you keep wondering “but why didn’t she use her ability to create escape-proof spirit jars ?” or “why didn’t he simply ask a fish ?” and it becomes a pattern, Marginal is likely the answer.

This shouldn’t be confused with Trick Powers (Blood of Heroes Special Edition p. 227), Omni-Power and Omni-Gadgets, or “do anything” Powers such as Sorcery.

(-0.5 FC simply means that you check how much a -1FC would be worth, halve it (rounding down) and use that number.)

As noted in various Power descriptions, reducing a Power or Attribute to 0 APs usually shuts it off entirely – the exact effect depending on the Power in question.

If a Power reducing a Power or Attribute to 0 APs has the No Nullification Limitation, this no longer applies. Powers and Attributes reduced to 0 APs will continue to function, though they will be unable to perform meaningful Dice Actions. The difference can be crucial.

The No Nullification Limitation is normally taken for Powers such as Drain, Neutralize, Paralysis, etc.

When purchased with this Limitation, Invisibility renders the character transparent but not completely invisible. This allows other characters to make a standard visual Perception Check to see the invisible character, even if they do not have special visual Powers.

A Power or Skill with this Limitation symbolizes an ability the character regrets having or ever needing and is hesitant to use except under the most dire circumstances. Use of said ability for a particular scene (length of which determined by the GM) costs the character 5 Hero Points, a situational “Guilt Fee” of sorts.

Non-payment of this fee will cause the character to temporarily develop the full Guilt drawback until the debt is paid off.

Regretful may not be applied to an ability along with the “Always On” limitation, as there is no way to avoid the ability’s use.

Designer’s notes: The thematic difference between Regretful and Marginal is that Marginal represents an ability that is actually difficult to use or, metafictionally, that some writers forget the character has, while abilities with Regretful are easily used and often commonly acknowledged (however obliquely) but the character is personally hesitant to do so.

The high FC modifer reflects the possibility that this Limitation can lead to temporary imposition of a 50 point Drawback.

A Power with this Limitation requires the character to collect a DNA sample — a hair follicle, flakes of skin, a drop of blood, etc. — from the target before the Power can be used.

This most often applies to Powers that mimic or affect others’ physiological abilities or traits, but might apply to other types of Powers with the GM’s approval.

This Limitation is usually combined with the No Range Limitation, as characters with this Limitation usually have to come into physical contact with their target. 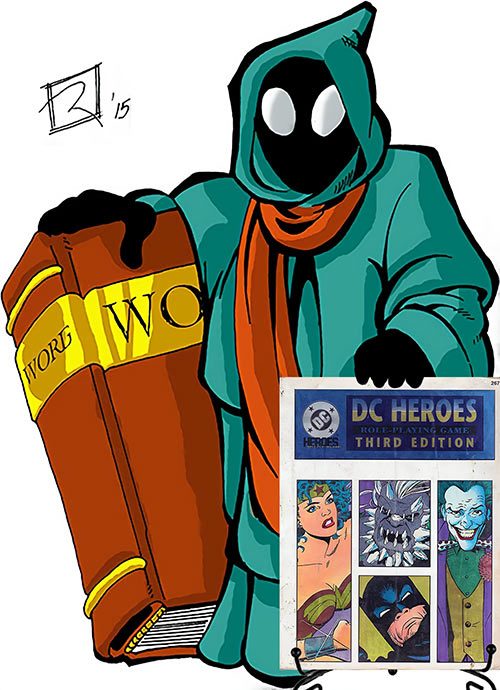