Mutants & Masterminds note: The DCH way to roll dice works just fine in M&M except at low PLs — see the discussion about using 2d10 rather than 1d20 in the Mastermind’s Manual.

Point of this article

The chief goal of this short article is to serve as a handy reference when setting game stats up. For instance :

Mostly, I’m concerned about people assuming that the probabilities in DC Heroes are linear. As they would be if the game were using a d20 for rolls.

Thankfully, the distribution formed by 2d10 is about the simplest practical normal distribution around. The matrix of possible results is regular. Computing the probabilities to roll under or over a given result can easily be done through quick mental calculation.

The trick is the exploding dice mechanics, where every double (save double ones, or ’snake eyes’) leads to an additive reroll. Obviously, this is not a trivial feature, probabilities-wise – 9% of rolls reemerging in the rightward tail of the distribution can be significant. 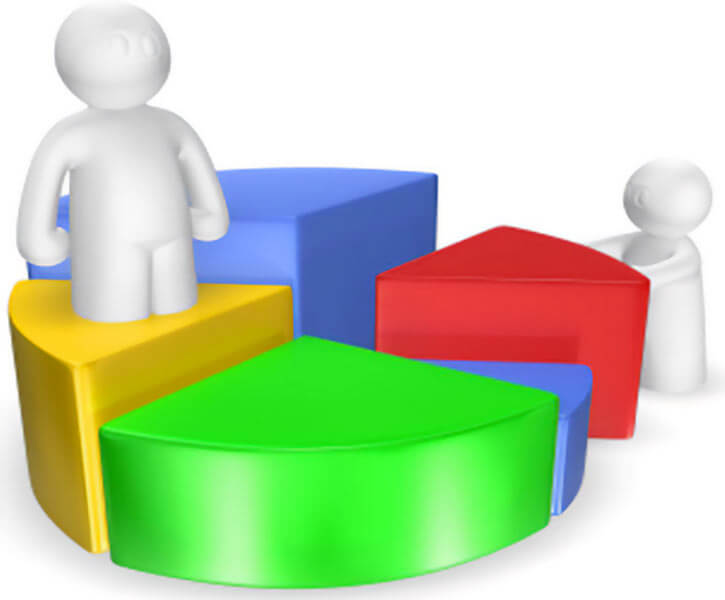 As a quick intro, here are the probabilities for an unmodified 2d10 distribution.

It’s simpler to grokIntuitive yet robust understanding of how something works, and as you’ll see it’s close to the actual distribution in practical terms.

The “explodes on a double” mechanic (that is, reroll and add the new roll to the original roll if you get a double) has two effects.

It takes away 9 possible combinations, and transform each of those in a mini-normal distribution that adds to the normal curve to the right of its inception.

Since we’re living in such a modern world, let’s look at a picture of the distribution: 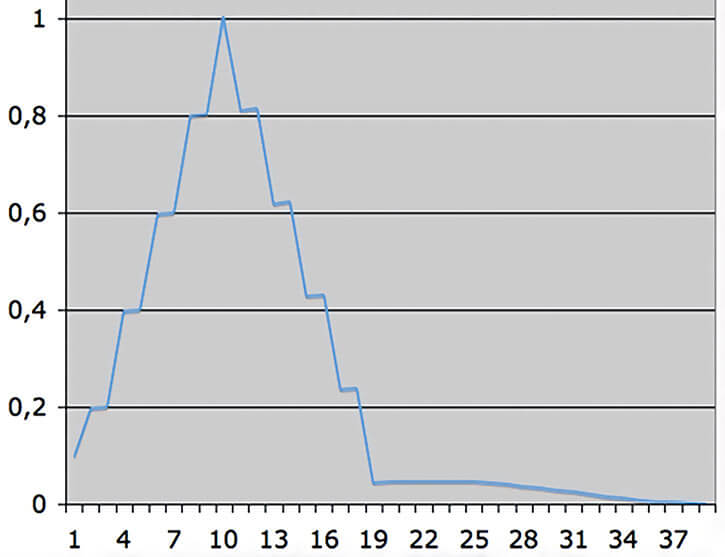 This assumes one re-roll after a double, to keep things simple.

One of the Teeming Million of writeups.org readers kindly simulated a hundred million MEGS dice rolls to double-check. In this non-simplified version, the dice rolls keep going as long as it’s a double.

The impact on probabilities is about a 0.1% difference up to 20. But predictably, it plays a much more important role for high values.

The flat percentages above are IMO slightly deceptive.

It’s a distribution, so of course it simulates an infinite number of dice rolls, smoothing things over. That’s the point.

But there is still a 9% chance, which is certainly not negligible, to add a median 11 to your first roll. And the game mechanics, and in particular the Column Shifts, mean that it has a drastic impact.

This kind of “low probability, possibly high impact” event  is, within a 95% confidence interval, not well described by common statistical tools*. Here, the 91% of normally normally-distributed events are drowning the signal.

One should be careful to remember that:

The 100,000,000 simulated dice rolls provided by our reader Vincent go up to 111 – presumably the highest MEGS dice roll you’ll ever hear about.

For those with a morbid curiosity about very-low probability dice rolls in MEGS, here is an excerpt of his results table :

The average result from this immense number of rolls was 12.066.

If somebody needs to simulate many rolls, Vincent’s code :

Our contributor Adrian shows how these probabilities relate to various events from games, sports, ways of dying, etc. in the USA. Along with the lowest roll needed to represent them happening.

The following, again by our contributor Adrian, also approximates the probability distribution of the exploding 2D10 system. It was created by combining the individual probabilities of 15,183 rolls.

It started by looking at the distribution of the 90 ways of rolling two ten sided dice without rolling doubles that lead to a longer chain of rolls. It then looked at the series of additional combinations that were possible with each successive series created by rolling doubles.

Every “chain” of rolls terminates with either a set of non-doubles or with double ones. A chain of one has no doubles. A chain of two has one set of doubles and one terminating set. Here is a list with the number of combinations used for each chain.

Finally, here is the table of probabilities.

Helper(s): Jasper at http://catlikecoding.com/anydice/  , who helped me spot a really stupid mistake of mine. It’s a cool site, you should check it out. Also, Eric Langendorff, Vincent Primault, Adrian Patten.