His friend and co-worker, Jack, tried to talk him out of it, but Jeff was determined to make a name for himself as the City’s newest superhero.

What the Running Guy didn’t have was a villain to fight. He paid Mort Spivey of Villains, Inc., a cool five thousand bucks to stage a superfight with the Red Scare. The Running Guy, waiting for a TV news crew, was late to the fight and the Tick wound up fighting the Red Scare.

The Running Guy arrived on the scene a few minutes later, furious that the Tick was fighting “his” supervillain.

The Running Guy is a thin, fit young man in his early 20s. His costume looks a lot like a bicycle racer’s gear : a green-and-white tunic, purple shorts, running shoes and a green-and-white bicycle helmet. His face is partially concealed by a green mask.

The front of the Running Guy’s tunic bears his logo, which he often has to explain to people : “Is it a shooting star or a chicken claw ?” “No, it’s a palm tree bent by hurricane-force winds. You know, as if… as if I had just run by really fast and WHOOSH, and the wind just… just bends the palm tree… you know ?”

The Running Guy can be dropped into the DC Universe pretty much unchanged. If you’re bringing him in without the rest of the “Tick Universe” characters, he can still be a comic-relief “wannabe” superhero. 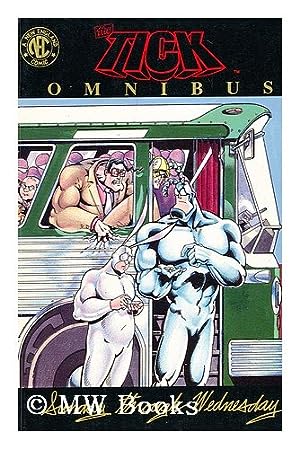