The Russian is a ridiculously over-the-top Punisher character, who primarily appeared in 2000-2001 story arcs. That was early during Garth Ennis’ The Punisher run. Back then his work came across as innovative and with a manic, iconoclastic, sarcastic quality.

This profile only covers the Russian’s original appearance, since that’s when it was written.

The Russian is enormous, fantastically strong and nearly impossible to bring down. Fighting the Punisher hand-to-hand, or breaking a firearm with his bare hands, is trivial for him. He’s also one of the most brutal men on Earth, and can kill heavily armed teams of soldiers with his bare hands within a few panels.

He once accidentally killed a guy by giving him a friendly hug over the shoulders, and there is a credible rumour that he once ate a man for a bet.

For decades, the Russian has been a sort of tourist in the world’s war zones. Lebanon, Iraq, Rwanda, East Timor, Chechnya, Belfast… He always goes where there is trouble and lawlessness, as he loves those. He’s also on the payroll of numerous criminal organisations, from the Yakuza to the Las Vegas P.D..

In 2000, the Russian was hired by mob capo Ma Gnucci to take down the Punisher (Frank Castle). Castle had eliminated all but a few of the Gnucci soldatos in the previous months. The Russian was taken to Castle’s house, and playfully demolished Castle. In desperation, the Punisher tried to burn his fie.

The Russian was blinded for a short time when the Punisher threw a half-dozen piping hot pizzas at his face. The Russian was kept busy for a short while, complaining about how horrible it was (it wasn’t good pizza), and getting the cheese out of his eyes and burned face. The Punisher pinned and smothered the Russian using his morbidly obese neighbour, Mr. Bumpo.

Castle then hacked the Russian’s head off and went to torch Ma Gnucci’s home and kill her.

The Russian’s English is a bit mangled, but easily comprehensible.

The Russian has taken way too many blows and bullets in the head. He has memory problems, such as forgetting where he is a wanted man – or having troubles remembering whom he came to meet. He’s not particularly stupid – but he has an old boxer’s brain and an attention deficit disorder.

As he put it, a lot is not clear to him since they took this bullet out of his brain. He also experiences episodes of confusion whenever he hits his head.

The Russian is incredibly cheerful. He’s content with his life and thinks everything is great. Violence is a wonderful game for him. Thus, he likes to banter at his opponents (whom he always cheerfully treat like friends) and do the occasional bad pun.

He’s nearly unkillable and doesn’t feel much pain. As a result, he keeps laughing and behaving like a good ol‘ boy on a lovely vacation in even the most terrible of circumstances.

Since fighting is such a pleasure, he’s always playful with his opponents. When the Punisher smashed a chair over his head, the Russian thought it was a cool move. Therefore, he stunned Castle long enough to go away and rip a toilet off the floor so he could respond in kind.

That was but one of numerous pauses he decided to make in the fight. The Russian wanted to keep things interesting instead of just shredding the Punisher. He only got somewhat angry when he was hurt.

The Russian is a big, big fan of super-heroes. He deeply regrets the lack of supers in Russia, as he thinks they are *so* cool. If he has to fight a super-hero, he’s fairly certain to enthusiastically talk about how he likes them and ask for an autograph.

He’s also an old school Communist. Well, nominally. He doesn’t actually understand anything about politics. But since they kept telling him Communism was the right thing during his youth, he still believes it.

(Coming from the toilets to find a heavily-armed hostile commando team in his home) “Hello, comrades.”.

“Is he like mighty Thor ? I am fan of mighty Thor. He has big hammer, he seems like good Communist…”

“Ten million dollars ? Oooh. The Russian could buy many pairs of Levis’ for that amount. Many compact discs. It’s a deal.”

(The Punisher stabs him without any effect) “Knife in the guts, yes ?That’s not very nice, ah ah ah.”

(Bashes the Punisher with a ripped off toilet, throwing him across the room) “And what a landing ! Six point six ! Ha ha ha ha !”

(Takes a pose and mimes web shooters while the Punisher gets back up) “Amazing Spider-Man. Thwipp, thwipp ! Ha ha ! You know I am founding member of Daredevil man without fear fan club of Smolensk ?”

Drawbacks:
Creepy appearance (size and scars), SPI (too many blows to the head), Attack vulnerability (-2CS RV against heat and flames). 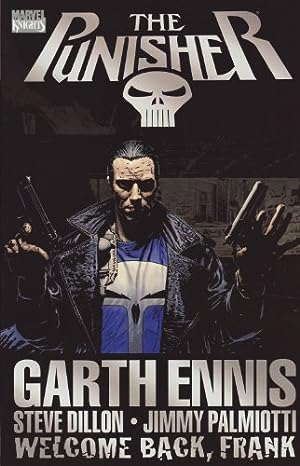 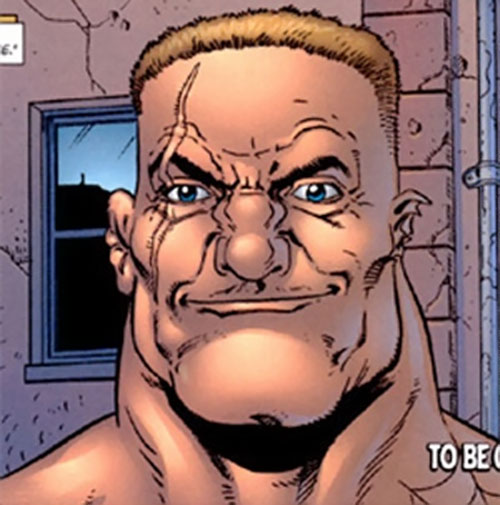