Ryder is an intense, powerful man. The Skrull DNA mixed with his own grants him:

As a former SHIELD member he is skilled in demolitions, tracking, firearms, motor vehicles, etc..

Ryder also has a knack for using words to his advantage and people, especially women, are often persuaded by him.

Ryder also is a very intelligent man although with a brutal, strong attitude and a very dangerous individual in many ways.

It appears Ryder used to be a member of the organization called SHIELD. He was part of some messed up mission and went underground.

Then happened the most bizarre thing ; Ryder ate a hamburger and got superpowers. Years earlier the Fantastic Four had defeated a small Skrull invasion. They hypnotized these shape-changing aliens into becoming cows on a field. But these cows were sent to slaughter, and turned into hamburgers.

Some unfortunate Americans got an alien brain eating virus. It was similar in some ways to Bovine Spongiform Enhephalitis (BSE), but with Skrull DNA. Many people died, but in Ryder’s case the virus incorporated some of the alien DNA into him.

Skrull DNA apparently has some racial memories incorporated into the DNA. Ryder thus got access to these through strange visions. He also got the ability to completely control every molecule in his body which he has learned to use to its fullest extent.

However, the virus will eventually make him completely mad then kill him. And now and then a virus carrier will completely loose control and go into a rage. But Ryder appears to be too disciplined to let it affect him.

Ryder tracked some more Humans who had gone through the same thing as him. He persuaded each one to join his Skrull Kill Krew. Their goal was to slay thousands of Skrulls hiding on Earth and preparing a new invasion. The mission was made much easier with their powers and their ability to see through any Skrulls disguise.

The team, with Ryder as the natural leader, consisted of Moonstomp, Riot, Catwalk and Dice. Ryder clashed with Captain America (Steve Rogers) (who was unable to defeat him) but the team continued on their mission until they happened upon Pleasant Valley with 3678 Skrull inhabitants ! They successfully destroyed them all and continued on to the world to find the lasting Skrulls.

Ryder is a huge, muscular Black man with dreadlocks. This hair is either kept in a ponytail which leaves two dreadlocks swinging in the wind from the top of his head and the rest lying on his back. Or it is completely free assuming an enormous volume, probably with manipulation via his powers.

He wears shades, a pair of grey leather boots, blue trousers and a dark green vest. The sleeveless T-shirt he has beneath it has a picture of an ugly Skrull on the chest with the text ’Kill Krew‘ on top of it.

His face is clean shaven and he always wears a pair of dark shades and a grim appearance. On his wrists he wears two metal bands. Ryder also is usually seen on a motorcycle with the rest of his gang and he looks real mean.

Ryder is a very intelligent man, an excellent speaker and manipulator through words. He has some sense of honor so he won’t kill superheroes although humans may still perish in his war against the Skrulls.

Ryder really hates Skrulls and will hunt for them until the day he perishes from the virus. He enjoys taunting Skrulls before shooting them. Most people fear him just upon seeing him and this is fully justified ; he radiates power. Ryder cares for his team, but not much, and could be considered a loner. Ryder is also a cold blooded killer and enjoys his work.

Ryder is incredibly confident and is always cool, at ease and in control of anything. He exudes articulate, sarcastic wit and seems to take great pleasure in shocking civilians with his wanton acts of carnage and the revelation ordinary-looking people are actually plotting space aliens.

His impending death seems to make him both unhinged and wanting to be remembered as that incredibly cool, suave badass.

Through sheer force of will and self-discipline he has learned how to use the full extent of his powers.

He almost has to do nothing at all before women fall at his feet (maybe this is some mental power at work). Ryder also inspires the members of his team into believing into the cause and their own abilities and as such is an excellent leader. While speaking he often gives the impression of knowing much more than he is saying. Which basically is true.

Shortly put one could say that Ryder’s personality makes his a very dangerous man together with the rest of his abilities and powers.

“I’m the Negro from your worst nightmare, sweetheart.”

“That was real impressive, Captain, but you just made one significant error in your assessment of that gentleman’s character.”

“Dice, would you kindly pass me my severed arm ?”

“Get out of the way people ! We’re two seriously violent individuals !”

“Moonstomp ! Deal with the cowardly mothers in that highly ostentatious automobile.”

Well, Skrulls aren’t a big part of the DC Universe and considering they are all that is important for Ryder (killing them, that is) you can’t just trough him in as is. Either change his obsession to Durlans (some sort of tie-in with the Invasion is needed here) or also insert the Skrulls into your DCHRPG campaign. 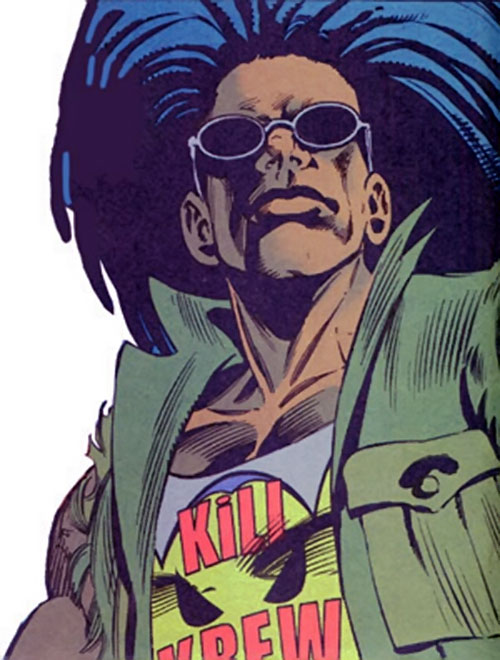