This take looks at Ryu and the entirety of his updated history and some of the alternate versions from some of the versus series.

Ryu has forsaken everything else in life to improve his martial arts and to walk the path of a warrior. He is one of the most powerful fighters in the SF universe. He has won countless victories over highly skilled world class martial artists.

His time spent in deep meditation has allowed him to harness his chi . Now he can turn it into one of the most potent projectile attacks in the SF universe, the Hadouken (or “Dragon Punch”).

While his buddy Ken focuses on flashy kicks and a somewhat erratic fighting style, Ryu is all about solid reliable techniques. In DC Heroes RPG terms he almost always substitutes his Martial Artist for either EV or RV. He also sticks to punches a little bit more than Ken does.

His martial arts style is a nonlethal version of Ansatsuken – the killing fist style. When Gouken taught it to Ken and Ryu he removed all of the killing moves. This safer version focused on solid technique rather than on doing as much irreparable damage as quickly as possible.

As such Ryu never enters Killing Combat. The only notable deviations are when he has been influenced by the Satsu no Hadou. His Hadouken is also powerful enough to kill an opponent outright if Ryu isn’t cautious. Say, about knocking back an opponent into a hard obstacle.

Ryu’s awareness of his own strength, and his great skill, always allow him to respond with appropriate force.

Ryu was an orphan, his past unknown. Gouken found in the woods, and adopted him.

(This series originally was a fan tribute. But Capcom loved it and made it canon. So yes the fans actually wrote the story of Ken and Ryu the early years.)

Gouken trained Ryu in the martial arts from a very early age. When he was about eight or nine Mr. Masters, one of Gouken’s old friends, came by to drop off his son Ken. The Masters were quite wealthy and their only child had grown up spoiled. He was as reckless as he was selfish. He always got into trouble at school and had a penchant for starting fights.

Ken almost immediately attacked Ryu after they were first introduced. But the calm and collective Ryu gently took him down without so much as breaking a sweat.

Ken’s father forced him to apologize and Ryu offered him a hand up. From that day forward Ken learned discipline and began his journey as a martial artist.

When the boys were nearing adulthood Gouken decided it was time to teach them the Hadoken. 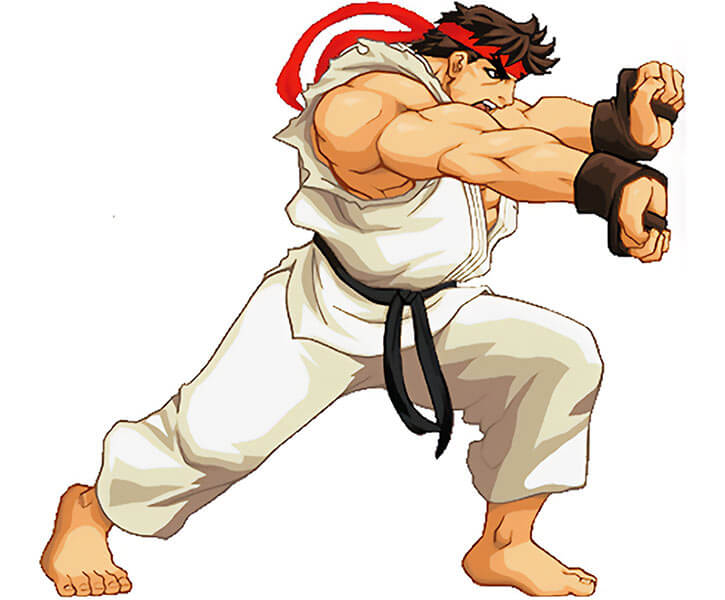 However, during this period Ryu had been having frequent nightmares about a mysterious dark figure. It kept calling out to him to embrace his inner darkness and let loose with the killing intent.

Ryu had always been a discipline fighter with no real bloodlust, but the callings were a powerful and seductive thing and he became confused.

While the teenagers were training a confused Ryu partially embraced the murderous intent. He shot forth his first hadoken infused with the dark energy. This seriously injured Ken.

Gouken had been suspicious of a malevolent presence, but now he was certain. He told Ryu to go meditate while he tended to Ken’s wounds.

Furthermore, both Ken and Ryu had grown suspicious that their master wasn’t telling them everything.

Eventually, they learned that Gouken had lived and trained with fellow student Goki. Training under one Gotetsu, the pair were friendly rivals much like Ken and Ryu. But they were both in love with their master’s daughter Sayaka.

Sayaka chose Gouken. In an attempt to one up his romantic rival Goki fully embraced the satsui no hado – the killing intent. He attacked and nearly slew Gouken.

Gotetsu intervened in the nick of time saving his pupil. Punishment was swift and without mercy – Goki was banished from the dojo. He began living in the surrounding woods, fully embracing the satsui no hado and doing nothing but training.

Upon learning this, both students felt betrayed by Gotetsu. Ryu in particular realized the dark man that had been calling out to him was none other than Goki – now calling himself Akuma.

This drove a huge wedge between teacher and students. Both Ken and Ryu soon left the dojo to strike out on their own.

Ken returned to America and Ryu was set to travel Asia. The two sparred one last time and it seemed that Ryu finally had his killing intent under control. At least he did for the time being…

Meanwhile Gouken and Akuma clashed again after so many years. Gouken put up a good fight and did have the upper hand for a while, but he was no match for Akuma’s dark power. Akuma ended the fight with and instant hell murder move. That seemingly killed his former training partner.

I prefer Ken’s epic theme. But the vintage SF2 chiptune for Ryu is still nice, and hasn’t acquired certain implications over the years.

Ryu proved a worthy warrior indeed. He was able to best all other challengers including his former sparring partner Ken.

He was therefore granted a title match with the current reigning champion Sagat. However despite putting up a valiant fight he was taken down.

Sagat offered a hand up to the nearly unconscious Ryu as a sign of respect to a worthy challenger. As Ryu lay dazed on the ground consciousness slowly slipping away from him he felt a dark cruel rage boil up from the depths of his soul.

He wanted to win at all costs. With new found strength he attacked the vulnerable Sagat with one his most powerful Dragon Punches ever. It cleft a gigantic scar across Sagat’s chest and nearly killed him.

Having knocked out the reigning his opponent Ryu was declared the winner of the World Warrior tournament. Sagat would later swear vengeance upon him.

Ryu returned home to tell Gouken of his victory, but was shocked to find out that he had apparently been murdered in his absence. This led him to seek out and challenge Akuma. 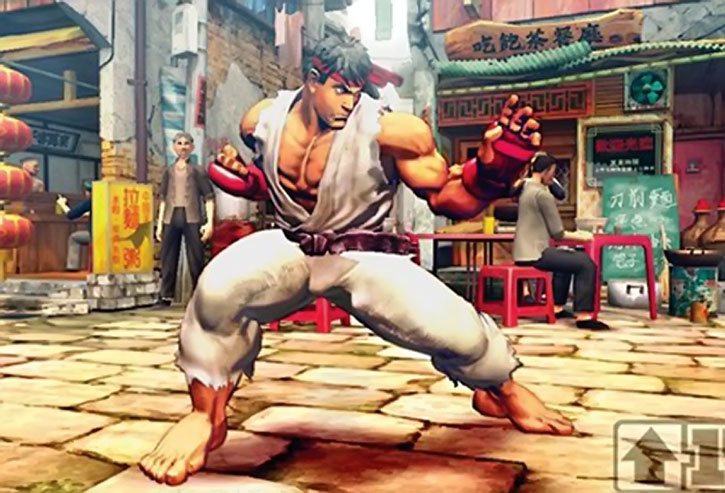 They eventually faced each other on the secluded island of Gokuentou. However Ryu’s earlier brush with the the Satsui no Hado, and his grief over Gouken, left him unfocused.

After a long battle Akuma proceeded to explain the true power of the Satsui no Hado. He told Ryu how it would make him an unstoppable warrior in exchange for consuming him with the insatiable desire to win even at the cost of his opponent’s life. Akuma had chosen this path and had merely been toying with Ryu.

The evil warrior then demonstrated his true strength by smashing the small island with a single blow.

Still confused and shaken Ryu sought out his former sparring partner Ken Masters. Ken had also heard of his sensei’s death and wasn’t sure what to make of the situation. The two agreed to a friendly match in the hopes that it would keep them focused. Ken easily defeated Ryu.

Ken realized during their bout that Ryu had not been himself every since his “victory” over Sagat, his brush with the satsui no hadou, and his encounter with Akuma. He gave Ryu his hair tie as a parting gift to remind Ryu to stay focused and be ever vigilant.

Shortly after this Sakura Kusagano found Ryu. She sought to study under him. Sakura-chan had become obsessed with him after watching his title bout on TV. Amazingly, she had mastered a few of his signature moves despite having no formal training or a teacher.

Ryu politely declined. He still felt that he had a lot to learn and was not yet worthy of a student. But Sakura vowed that she would one day make him accept her as his student.

Sagat angrily demanded a rematch. Ryu did not wish to fight, but Sagat would not take no for an answer.

Still guilty over using the satsui no hadou to attack the honorable Sagat, Ryu threw the match. He hoped that it would give Sagat some closure.

Sagat later came to realize that Ryu had let him win. This was an epiphany for him. It would lead him to cast aside his hatred of Ryu. Sagat even left Shadaloo, as their criminal mind set was incompatible with his true warrior’s spirit.

Two years later Ryu was still troubled by the previous events that happened during Alpha 2. He travelled the world trying continuing to train and fight worthy opponents. 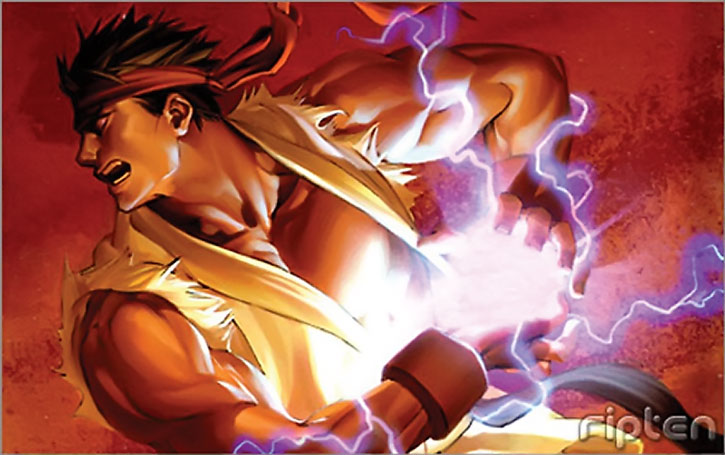 This led to a fight with Rose. She told him that the only way that he could defeat the legendary fighter Master Bison was at the cost of his soul. This further confused him.

Ryu did eventually fight Bison, but was overwhelmed. Bison had sought him out as he wished to recruit only the strongest fighters to serve in his criminal ambition for world domination. Knowing full well that the noble Ryu would never willingly serve him, Bison had him brainwashed.

As a test, Bison set up a rematch with Sagat. But the Thai fighter realised that Ryu had been brainwashed, and was diminished.

Sakura had been traveling the world along with Dan Hibiki, searching for Ryu. The two challenged Bison to a fight for Ryu’s freedom. But they were nowhere near strong enough to challenge Bison. They were on the ropes until Sagat defeated Ryu.

Sagat was furious about Bison’s treatment of Ryu. And while the Thai engaged Bison, the defeated Ryu shook the mind control. All four fighters overwhelmed the master of Shadaloo.

Bison was killed in unclear circumstances. But he would later be brought back to life with the help of his secret weapon the Psycho Drive.

Ryu once again entered to test his skills as a warrior. The exact details of his matches were a little fuzzy. But he reportedly defeated numerous fighters in the tournament.

There is some implication in later games that he may have actually lost to his former training partner Ken Masters, but this has never been confirmed.

(This miniseries was brought to you by the same production crew that made Assassin’s Fist. It came out the same time as Street Fighter 4 and was supposed to help give the new title a bit of buzz. Like its predecessor it has officially been dubbed canon.)

Ken was training with newcomer Laura Matsuda. Ryu showed up in time to see the tail end of their sparring. Shortly thereafter Charlie Nash appeared. This leads to a brief fight with Ken and Ryu in which Charlie seemed to be able to hold his own.

The fight was halted by Interpol agents, who explained that everyone was on the same side. They had come to recruit Ken and Ryu to help stop an illegal arms deals going down in London. Laura decided to tag along likely to establish a name for herself.

Interpol sets up a sting where Ken and Ryu are to pose as buyers. But as these things often do the operation quickly goes sideways. As a result, a weapon of mass destruction was loose.

Laura and Nash tried to intervene, but Nash went on a rampage. It would later be revealed that Nash had been resurrected by the Illuminati to combat dark energies such as Psycho Power and Ryu’s Satsui no Hado. The resurrection was imperfect and Charlie was prone to fighting rages in Ryu’s presence.

During the clash it was revealed that the WMD is a Dark Hado Bomb. Decapre, one of Bison’s twelve dolls and an agent of Shadaloo escaped with it during the chaos.

Laura chased after her. They clashed, and Laura narrowly prevailed. This proved that she was starting to make a name for herself as a World Warrior.

Meanwhile Ken, Ryu, and Charlie subdued the other agents of Shadaloo.

This profile continues in its second half. 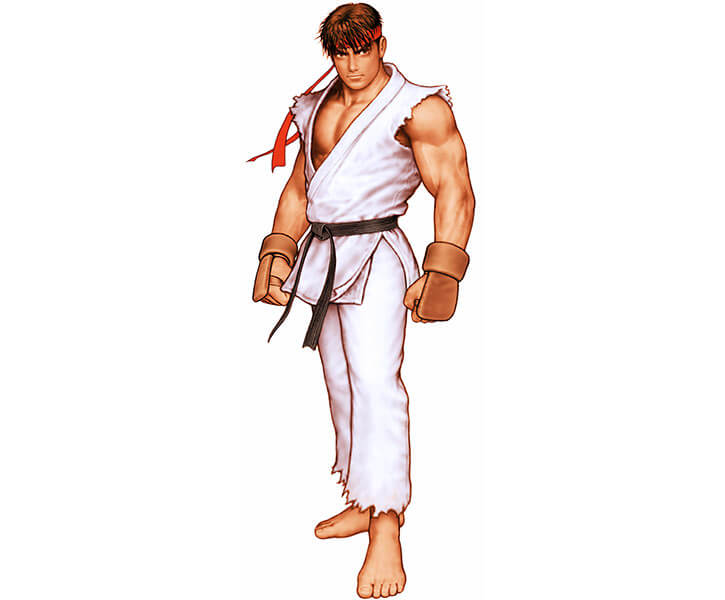 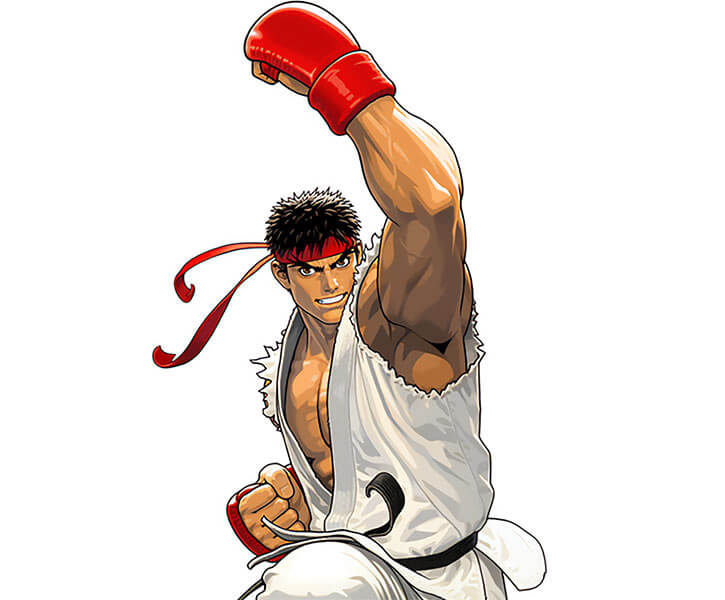