She is also an excellent weapons specialist.

Interestingly, she seems to operate at a “low cinematic” level. While she is very competent she does not pull off feats that would be impossible in the real world. Thus, a well-guarded installation is not something she can defeat via cinematic  stealth or tactics. She has to work on it.

On the other hand, she is unlikely to be detected or apprehended without setting a trap up.

While subterfuge is her main game, she sometimes has to go in for some more direct action. In this case, she will be loaded for bear, wearing a special costume and toting an impressive arsenal. It is presented in the game stats.

I have assumed without a shred of evidence she was designing and building her own armoury. There’s nothing to say that she doesn’t either, and she definitely has cutting edge technical skills.

Note that all those weapons were used at a time when Tony Stark himself was still operating the Mark 1 generation of the Iron Man suit. Her tech likely kept developing and could be fairly impressive in more recent times.

The Saboteur was a resourceful and proficient industrial saboteur for hire. She operated during the earliest days of Iron Man (Tony Stark)’s career. 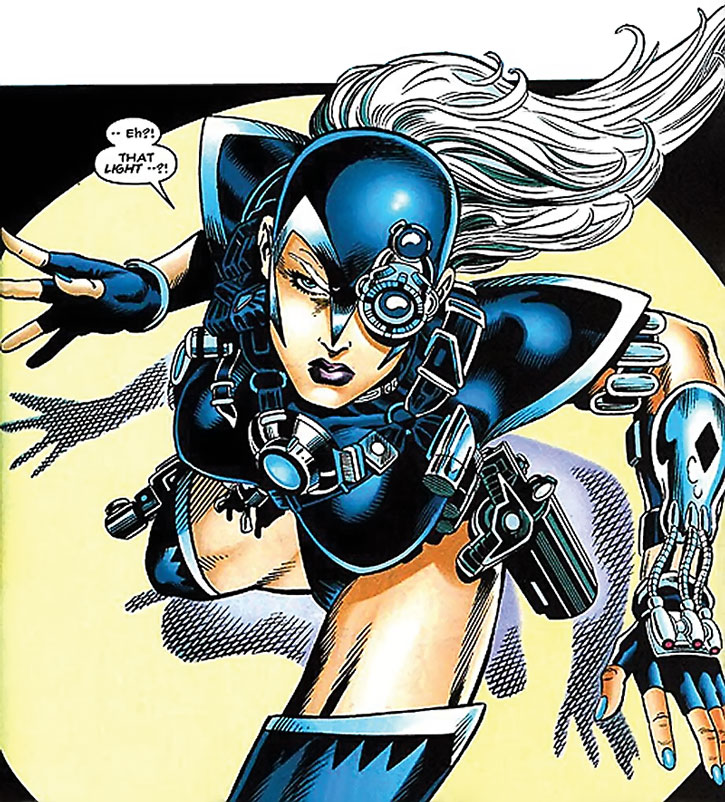 She was hired when Republic Oil And Natural Gas (which would later become Roxxon Oil) sought to perform an underhanded take-over of Stark Industries. The Saboteur’s objective was to destroy Stark Industries’ credibility in order to make the company vulnerable. That was meant to lead the then-depressive Tony Stark to sell for a fraction of the value.

The Saboteur infiltrated S.I. and ruined many key projects. She occasionally sabotaged weapon systems so thoroughly as to require Iron Man’s intervention to avoid a disaster.

A grain of Pepper in the gears

The plan was entirely successful until Pepper Potts, Stark’s personal assistant, convinced him to fight the take-over that was emerging.

Stark them gambled everything on a new government contract, a high-performance aircraft. Suspecting the Saboteur was behind some of his recent misfortunes, he had the prototype’s hangar placed under heavy and alert guard. This forced the Saboteur to reveal herself and make a direct attempt at sabotaging the aircraft, but Iron Man was waiting.

The Saboteur’s extensive weaponry proved useless against Iron Man. Despite her skills it looked like she was headed for a swift defeat. But she had a backup plan and hijacked a mothballed prototype for a heavily-armoured, well-armed ocean floor walker.

But Iron Man knew the weaknesses of this mecha , since it was his own design. He leveraged them to defeat and arrest the Saboteur.

The Saboteur appeared later in Daughters of the Dragon, a series whose continuity status I’d rather not consider.

The Iron Age is set in the sliding ten-year timeline  continuity. If you do not use the ten-year timeline for your Marvel campaign, her outfit is way too risqué for the early 1960s, which is when she would have appeared if one sticks to publication dates.

You can either design a 1960s costume for her, or come up with some rationale for running around in a thong and light blue nail polish in the 1960s.

Her hair (including her eyebrows) seems naturally white. Somehow, this distinctive trait does not seem to hamper her from being a successful undercover operative.

Confident, resourceful, reasonably smart and competent. She may in fact be overconfident or too proud for her own good.

For instance, she had no idea of how tough Iron Man actually was. Though in her defence he was still a bit of a newcomer at that point, his abilities still undocumented.

She tried to stick with her mission against overwhelming odds.

“I’m pleased to be considered dangerous enough to rate a super-hero.”

(Switching tactics) “I suppose I’ll have to try something else.” 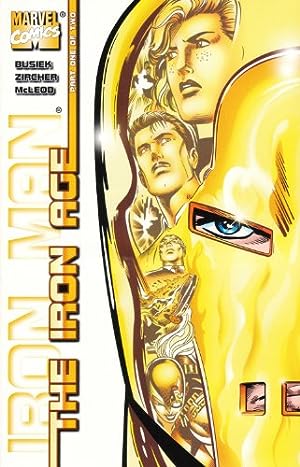 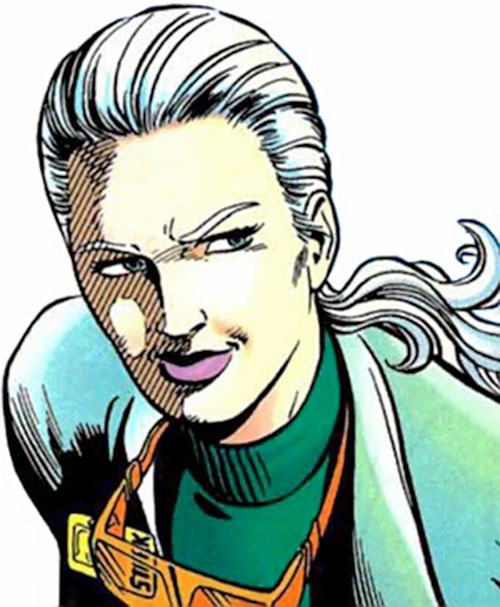 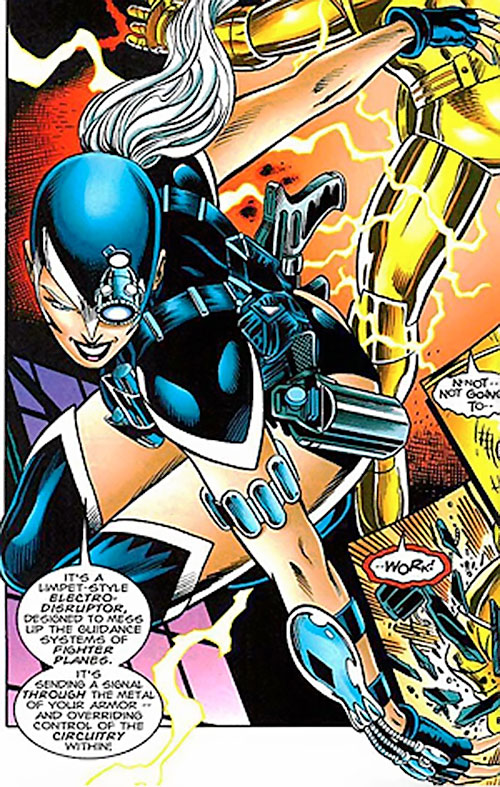