Sacrifice was my Player CharacterRPG characters played by a player, rather than the gamemaster or the computer. in an early 1990s tabletop super-hero role-playing game series, set in the Marvel Universe.

I quite liked her. And re-reading my 1992-or-so notes in the light of the 2018 Black Panther movie’s success is kinda fun. But do note that many of the references to oreganisations, bands, magazines, etc. are early 1990s stuff. 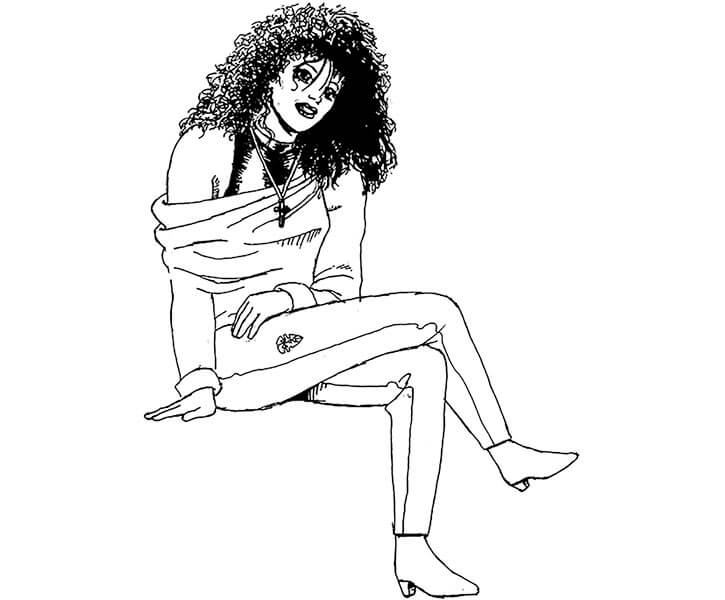 Evangeline is a superhuman mutant. Like many of her kind, she is surprisingly resilient.

Her mutant ability is an instinctive ability to focus magic forces, and in particular those related to the Vishanti. Though her progress has been chaotic, she is now able to call upon all three Vishanti for relatively minor effects, and has started developing an affinity for Munnopor.

She is remarkably smart, resourceful and charismatic. She is also ridiculously hyperactive and very likely to create trouble out of practically nowhere.

Being determined to be some sort of super-heroine, she has bought a lot of specialised, often customised equipment.

Though all of it is commercially available, her gear ends up being fairly impressive. It helps compensate for her lack of training, experience or big bad powers.

Her main weapon is a compact shotgun. It was chosen for its less-than-lethal ammunition and its ability, between the buckshot and the laser sight, to compensate for her mediocre markswomanship.

See the game stats for a discussion of her equipment. Because there’s a lot of it. 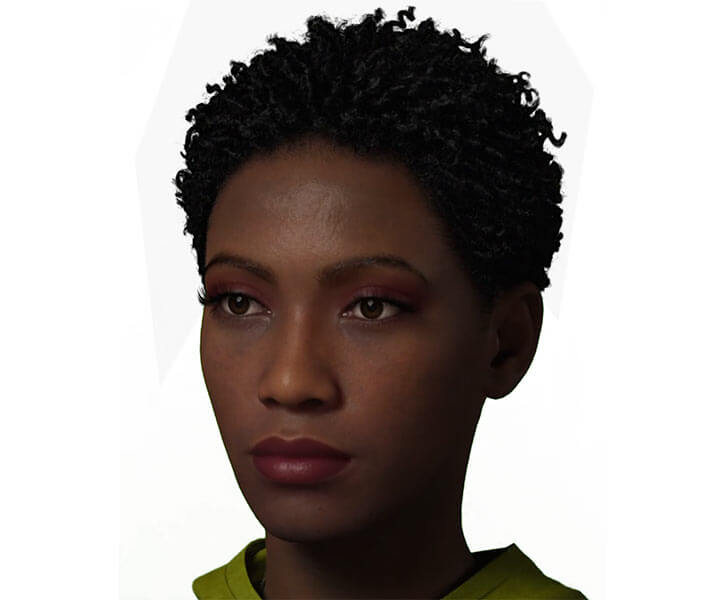 Evangeline is the daughter of a senior Wakandan civil servant, sent to study in the US. Her older sister Mary also studied in America. She is now a senior executive in a brokerage firm.

The M’Baré family has been Wakandan for three generations.

Evangeline’s great-grandfather was a nomad Fula  cattle herder in Mali. He came to Wakanda during the great 1913 drought, where he became a Christian priest. His older son became an important man in the small Wakandan Christian clergy. Evangeline’s father was a diplomat.

(When this character was created, there were accounts of Wakanda being in Northwestern Africa. This has since changed to the Great Lakes area, so closer to Southwestern Ethiopia.)

The family remained attached to its faith and nomadic traditions. Evangeline was raised in a number of transitory houses, but mostly in the familial mobile home. And for six months, she was a guest in the palace of T’Challa himself.

She learned early on about driving, land navigation and the travelling life.

Rarely staying in one place for long and much younger than her sister, Evangeline spent much of her time with her three imaginary friends – Hoggoth, Oshtur and Agamotto.

The Wakandan Christian faith is a meld of Catholicism and Wakandan tribal traditions. It considers the Black Panther god as one of God’s messiahs and greatest archangel. Evangeline was initiated to some rituals early on, and it soon became obvious that she was spirits-touched.

Albeit her “witchcraft” (actually stemming from her mutant connection to the Vishanti) was accepted in this tradition, it still scared her mother. Though on the surface they retained cordial relations, they never were close again.

(The description of Wakanda Christians is original to this character. If the subject has been brought up by Marvel’s worldbuilding, I’ve missed it. I have thousands of comics in my backlog.)

American woman, mama let me be

Evangeline came to the US at 15. She rapidly became more American than Wakandan – an adopted Valley girl.

After an incident where she vaguely started falling in love with a female history teacher, she found refuge in her religion. She attended the occasional Wakandan Christian event, and the much more common Unitarian Sundays  .

Wanting to expiate and forget her possible bisexuality, she also involved herself in a stupefying number of causes and activities. She eventually left the incident behind her and lived as a straight woman.

During the last years in high school, Evangeline developed an intense, bitter rivalry with one Mindy Meyer. She was the haughty, filthy rich heiress of the high-technology Iodine Corp.

This has created a number of incidents, and only got worse with Meyer’s WASP-ish disapproval of M’Baré’s unusual type of Christianity.

Evangeline is now at the UCLA  as an undergrad. She shares a large apartment with four close, resourceful friends.

A lot of her extra-curricular work has been to set up her own company, which throws parties, events and concerts. This company has slowly developed, culminating with the organisation of a minor Guns N’ Roses  gig (long story).

Evangeline eventually found herself on the receiving end of some sort of conspiracy. It seemed run by the FBI and aiming to discredit her father.

Determined not to let that happen (and looking for the chance to become a mutant super-heroine anyway), she designed the Sacrifice masked identity. She tapped the advice of her confidants, who include an ex-Special Forces priest and a technical wunderkind from the Pasadena Posers street gang. 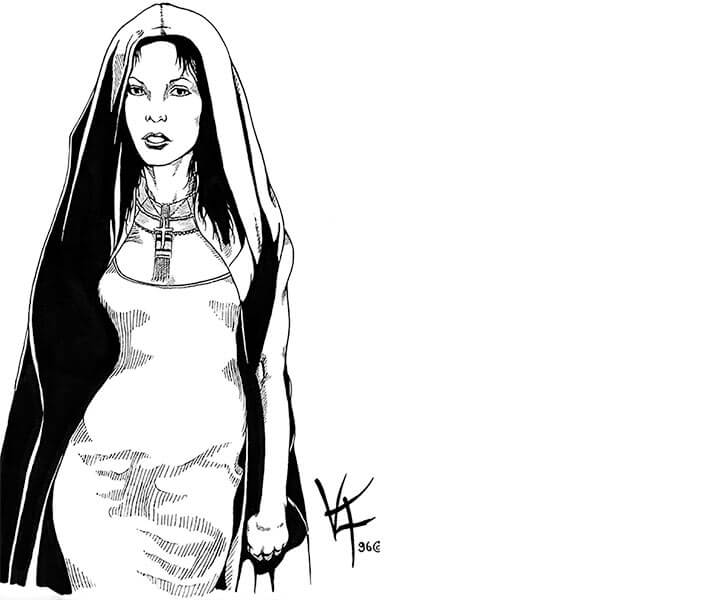 Her hairdo is also variable, but often elaborate and inspired by recent issues of Ebony  .

As Sacrifice, she wears her signature leather jumpsuit and shades, with a wig of locs and red war paint over her brow, cheeks and chin.

She tends to inject a little bit of Wakandan references into much of her clothing, jewellery, song titles, decor, etc.. This is chiefly intended to make herself look cool. 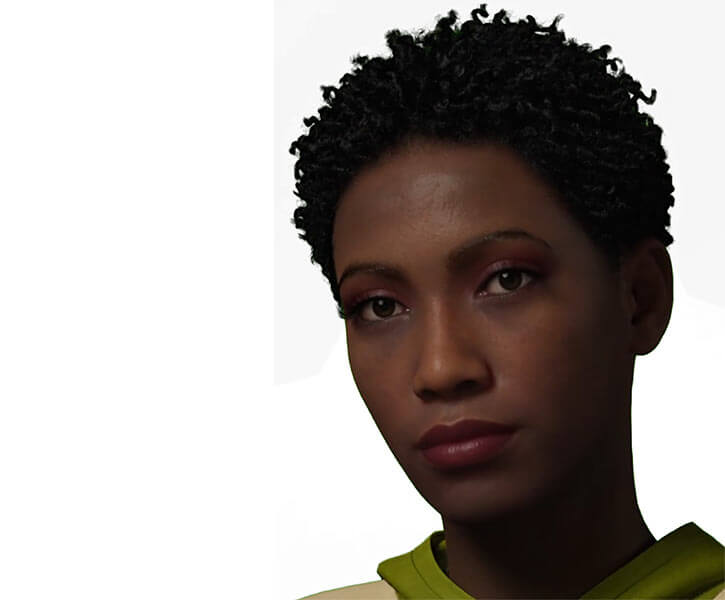 Hyperactive, very enthusiastic, talented, fairly aggressive, highly curious, quite prone to getting into trouble – her own and other people’s.

She’s a bit of a spoiled, bubbly Valley girl. But her unusual origins and busybody personality give her genuine empathy for minorities.

She’s a definite meddler (for better and for worse). And is entirely too proud and unlikely to back off about… anything.

Evangeline is not as self-centred as she seems, and has an army of good friends.

Though she’s exceptionally intelligent, Evangeline is just 18 and somewhat sheltered. In everyday life she can get a bit scatterbrained. Even in her important activities can be a little short-sighted and inexperienced.

She loves attention, and everything about her has to be cool, fabulous, smart, successful and original.

As Sacrifice she’s almost a different person. Cold, quiet, almost brooding, efficient – and with violence in her hands and her eyes. Her constant life-of-the-party and meddling-queen-bee behaviour as Evangeline apparently coexists with a darker and even more impulsive and proud side, which she had so far been unaware of.

It is possible that the angry, darker, more focused, much more violent side she explores as Sacrifice is tied in some manner with her powers. 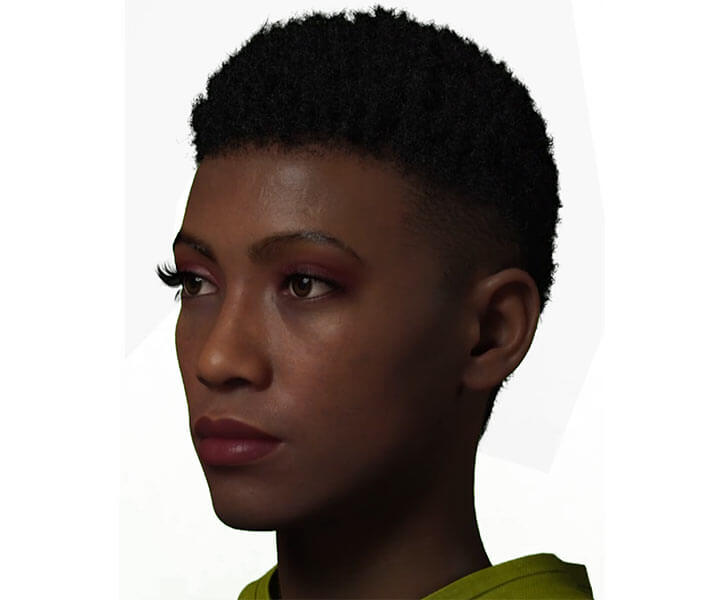 Occultist is a Powered Skill.

As Sacrifice, Evangeline packs an awful lot of commercial equipment selected to give herself an edge:

This a black leather jumpsuit, with :

The shoulders and arms are padded to look like extra muscle and there’s a cuirbouilli inset protecting the crotch.

Everything has a Gore-Tex layer underneath. Under the leather she wears a Nomex one-piece swimming suit, with a tailored-in athletic brassiere. Over that she wears a 6-point adjustable concealable Second Chance soft body armour.

Between the armour and the leather is a small bag of fake blood with a tiny explosive charge.

The gloves are black Reactor high-performance climbing gloves with extra layers of Kevlar.

The thigh-high boots have an inner layer of silk (to be donned and doffed quickly), a layer of electrical isolant, and broad 2 ½ inches heels. The soles are taken from high-end sporting shoes, with strips from another pair of Reactor gloves, making the boots as silent as sneakers and with strong gripping power.

Under the left shoulder is a modified DeSantis holster for the shotgun (the gun can thus be fired without being drawn). It includes 2 meters of thin steel cable which can be hooked to the shotgun’s grip.

The pump has been outfitted with a Laser Products handle [BODY 03, Flash: 03, Weaponry (Shotgun): 04] which includes a powerful tactical flashlight, a TacStar laser sight and a sling to hold the hand against the pump. She carries 20 extra ammo kept all over the costume in strips of four — eight more plastic buckshot rounds, two 00 buckshot ones, two steel-jacketed slugs and the following:

Black leather Blackjack [BODY 03, Enhance (EV): 01 (cap is 04), Miniaturisation: 01, Bonus: No Unskilled Penalties, Descriptor: Unarmed]. Though seldom used in combat (chiefly from lack of melee skill), it can be useful for intimidation. Hitting something rigid with a blackjack results in a loud, violent impact.

M645 Thunder Rod charge [BODY 02, Bomb: 06, Range: 01, Grenade Drawback]. This rod-shaped concussive charge can be inserted though a 12-gauge hole, and can be set to perform a small rocket jump before detonating.

… and the kitchen sink

In case of major trouble, Sacrifice will fit a Talon M203 grenade launcher [BODY 04, Range: 06, Ammo: 01] (with a CAR-15 stock) over her shotgun, which takes her a good 15mn due to lack of practice. Her now markedly heavier weapon can alternate between shotgun fire and grenades.

Source of Character: An old campaign set in the Marvel Universe.