Sanosuke is an extremely skilled martial artist. Yet he is not as incredibly skilled as his buddy, Kenshin, is among swordsmen.

However, he learned a special technique from Yuukyuzan Anjii, a mei-oh (or fallen monk). This is an attack whereby the fighter strikes his foe twice within 1/100th of a second, setting up vibrations that pulverize the foe.

When he later had to fight Anjii, Sanosuke improvised. He figured out how Anjii was able to generate the vibrations within his own body that cancel out that special attack. So he duplicated it to withstand that same attack.

Sagara Sanosuke is the last member of a street gang. The leader was slain during the fighting after the Meiji Restoration . Sagara was full of rage against the government, but Kenshin defeated him, and turned him into a friend. 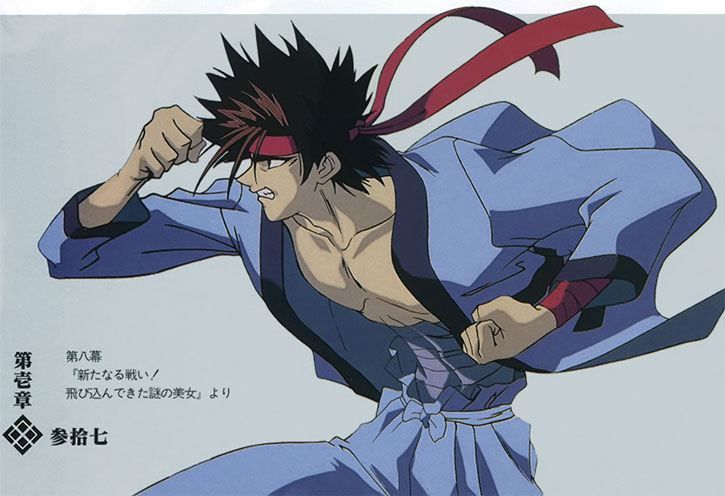 When Kenshin was sent by the Meiji government to stop Shi-Shi-O, Sanosuke was left behind. Swearing that he wouldn’t be a weakness, he promptly got lost in the wilderness between Tōkyō and Kyōto. While lost, he stumbled upon Yuukyuzan Anjii. Thus, he learned a technique the monk had developed.

When he arrived in Kyōto and reunited with Kenshin, Sanosuke eventually had to face Anjii in battle. His goal was to help the Ruroni find his way to Shi-Shi-O. The battle outcome ? Nuh-uh. You gotta watch the anime or read the manga.

A very tall man, at least for Meiji-era Japanese folks. He has spiky black hair, and usually wears: 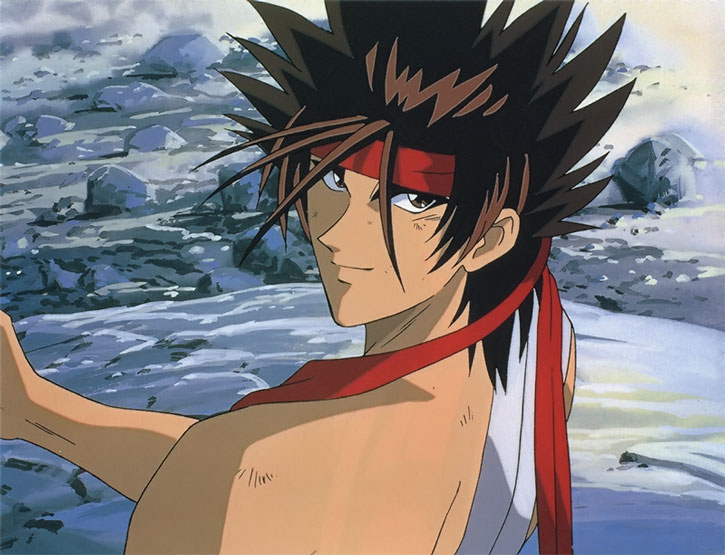 One-part anarchist, one-part street tough, and one-part dedicated martial artist. He lives his life by a code that declares hatred for the government, but justice and freedom for the people.

His shirt, which says “Bad” or “Sin”, is an expression of that.

The events of Ruruni Kenshin could very well have taken place in Meiji-era Japan in the DCU. In such a case, some Player Character  martial artist could find the special stone-breaking technique, and find an ancient version of Sanosuke, or one of his descendants, to learn it from.

He used to use an immense sword, about eight feet long, and two and a half feet wide. It was cut in half by Kenshin, and totally pulverized when he stapled it back together, and used it to swat a cannonball. Stats could be up to you, but it could cut a foot and a half thick tree completely through in one swipe. 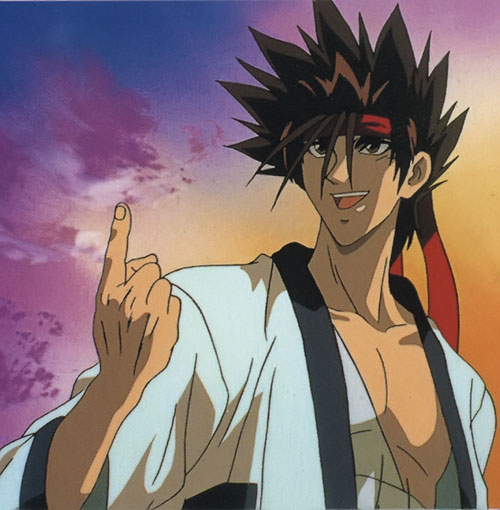