The Division was a 2016 shooter-looter video game by Massive and Ubisoft.

It had generally good reviews, and apparently sold well. Its detailed rendition of Manhattan was impressive. It also drew criticism for its peculiar politics, though Ubisoft insisted these didn’t exist (?!).

(The setting feels even worse after the 2019+ pandemic. Those who suffered losses from COVID-19 might prefer to play something else).

This article is a primer to the The Division setting. Our window into that universe will be an original, made-up-by-us character so it’s not too dry.

(Plus, if I have to create a character, of course I’m gonna give them a short backstory even if I don’t mean to. Roleplayers gonna roleplay, mate.)

This article is ≃10% over our read-in-one-sitting limit. It is therefore presented as two short articles.

Ms. Jackson is an experienced, combat-hardened squaddie from one of the Israeli Navy’s Snapir (“flippers”) commandos.

Some units — including Jackson’s — are special operations capable.

She’s a small arms and close-quarters battle expert. Much of her training focuses on cheerful situations, such as being outnumbered while storming an unknown rocking boat at night.

She’s also a solid krav maga fighter. But that’s unlikely to play a role in a tactical situation. If she gets disarmed (which isn’t impossible in CQBClose Quarter Battle. Usually meaning an indoors fight.) she’ll just execute a fast transition to a sidearm.

Jackson is exceptionally fit. She can run, jog, crawl, pull up over obstacles, rappel, etc. on the double for a good long while. 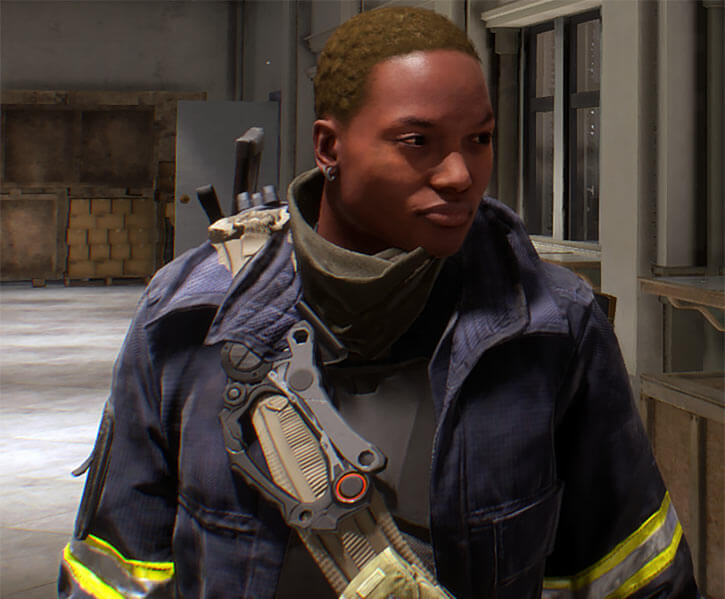 ISAC is a suite of electronic tactical equipment. It chiefly provides communication and intelligence. ISAC is meant to enhance the abilities of well-trained infantry in difficult terrain.

(Some details here are made up to represent gameplay. Say, the fibre optic cameras correspond to the game being in third person view.)

Ms. Jackson wears a tactical vest, plus reinforced protections for urban combat – boots, gloves and kneepads being essential. Her backpack is also armoured.

Like most Division agents she goes without a helmet. She needs to stay stealthy and with unhindered senses.

Since this is winter in New York, she wears multiple layers over her torso, plus a hat, two layers of hiking socks, a neck gaiter, and tough waterproof combat boots. 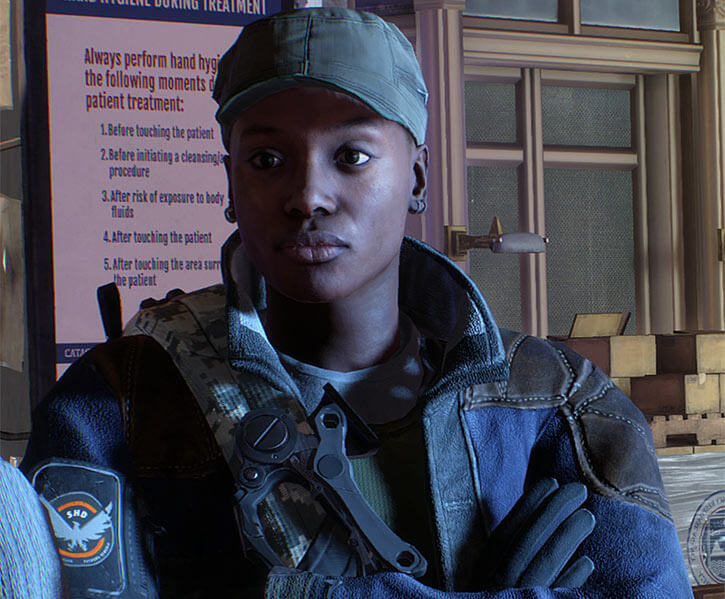 Her backpack is an extensively customised, armoured 75 litres model. She has years of experience moving with it in all conditions, and it’s precisely adjusted for her morphology. For instance, to rest more on her hips.

This huge pack allows her to carry a *lot* of supplies and ammunition. Mostly ammunition.

It also helps persuade them to find shelter in JTF bases, which also have medical drugs.

This article was one of my earliest uses of the Unreal Metahuman creator to do original character portraits. So out of enthusiasm I recorded an idle facial animations loop to show my portrait in motion.

The portrait (since redone using the same tool) isn’t meant to be a likeness of the in-The Division model, but more what was on my mind’s eye. And the lighting is incomparably better, not crushing the texture of darker skins as in the game.

Sahara’s workhorse weapon is a Patriot Ordnance Factory P416, with the 7.25 inches barrel (that’s 18.4 unpatriotic centimetres). It is a 5.56mm assault carbine (that’s .203 patriotic inches) meant for close quarters fighting, with an architecture resembling the H&K 416. It’s outfitted with :

When she has to work at medium ranges, Sahara transitions to a Fabrique Nationale SCAR-H TPR. This is a 7.62mm semi-auto precision rifle, meant for commando raids.

This SCAR isn’t a full-fat sniper rifle. But it’s much more durable, and the 20-round mag means it can be used at close range if things go wrong. It is equipped with :

Her “sidearm” is a lupara. She originally used semi-auto pistols, but a double-barrelled 12-gauge sawed-off works well for her when it comes to sudden defence at point-blank range. It’s a 1950s Spanish Bentley.

Sahara Jackson primarily uses flash-bang grenades. She finds the M67 hand grenade to be both underpowered, and too likely to have accidental side effects in an urban environment.

(The ordnance here is meant to represent the game :

When laying an ambush, Yetayesh might specifically bring a M249B squad automatic weapon.

A light tripod with a video camera, a motorized orientable gun mounting point, and a P90 personal defence weapon. It can quickly be set up as an autonomous turret, engaging targets on its own.

Since Jackson often operates alone, it is an important asset. The Elioud can be set up to cover her rear and a flank, for security. Or it can be set up to lay a fire corridor into which she can trick her opponents. It is also used as a diversion so she can flank the enemy.

The Elioud is rare equipment. It can only work in tandem with expert infantry wearing a ISAC rig. Ms. Elbaz might be the most experienced such operator in the world.

An Elioud must have a remote human operator. And since the video that the operator gets can be so-so, it should only be deployed in a weapons free engagement, without civilians running around.

Jackson’s Elioud is normally operated by her friend Javier. A former US Marine and minimum wage security guard, Javier is stuck at a JTF base due to a badly broken leg.

Yetayesh carries extra mags for her Elioud in her Huge Backpack Of Weighty Doom. She also had her ISAC unit registered on her Elioud’s IFF system, so it cannot accidentally shoot her.

Her main base has a crate of Division Elioud units. She’s the only one to use them, since the training program hadn’t started for other Division agents.

(In-game it’s just an automated turret. I fleshed it out a bit for verisimilitude). 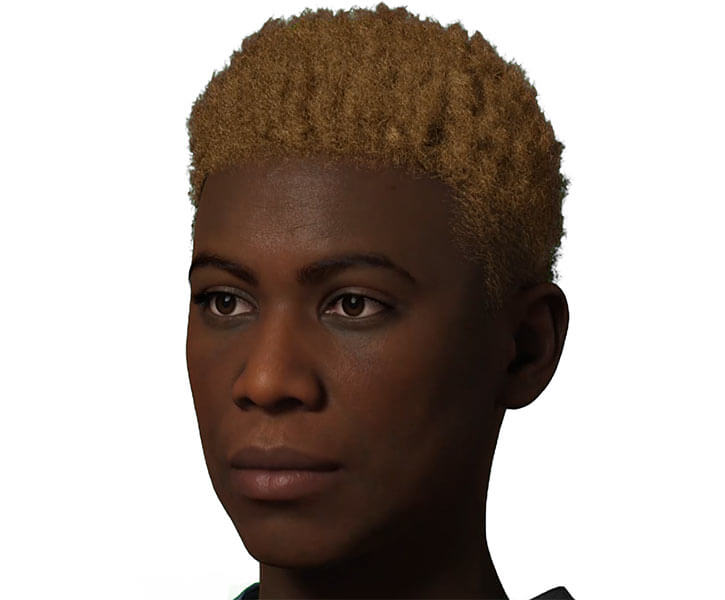 Nissim Black is an obvious fit for this entry.

(*If* I recognise everything correctly, the video shows a mix of US hip-hop dance styles, a style of trad Ethiopian dance, and a few bits of trad Jewish folk dances. But then I’m not a blue space goat who studies the anthropology of dance. At least not right now.)

Ms. Elbaz is from the Beta Israel  community. These are Ethiopians who, for intriguing but mostly-lost-to-time reasons, have been Jews for centuries.

Yetayesh’s mum Tetaye was born in Ethiopia. She lost her husband to malaria in a refugees camp shortly after her daughter’s birth. But in 1990, she was allowed to make aliyah – to move to Israel.

Originally, Ms. Meshashe could only find menial employment. But an older medical doctor, who had fled antisemitic riots in Tunisia in 1967, took her in. He also paid for her nursing degrees.

He shall have dominion also from sea to sea

Though she was a terrific soccer player, young Yetayesh sensibly prepared for a career as a paediatrician. But first, she had to serve in the military for two years. She ended up with the Navy in Haifa.

Yetayesh scored among the top 2% of her cohort during Basic Training. This drew the attention of Cpt. Roni Herzog.

Fed up with friction with fundamentalist servicemen, Roni was looking for one conscript to fill out an all-women Snapir harbour security patrol. Cpt. Herzog could then manage these four troopers separately from the male ones.

They were also among the Snapir marine units who field-tested advanced, hideously expensive soldier-assisting ISAC electronics. These were from an alliance of Israeli tech start-ups, funded by the military.

(This gear being Israeli is an additional detail, not given in the game.)

One deployment against Somali pirates went bad, with an operator breaking both her legs while boarding. But a lucky flash-bang throw by Yetayesh forced the pirates to surrender before things could get worse. 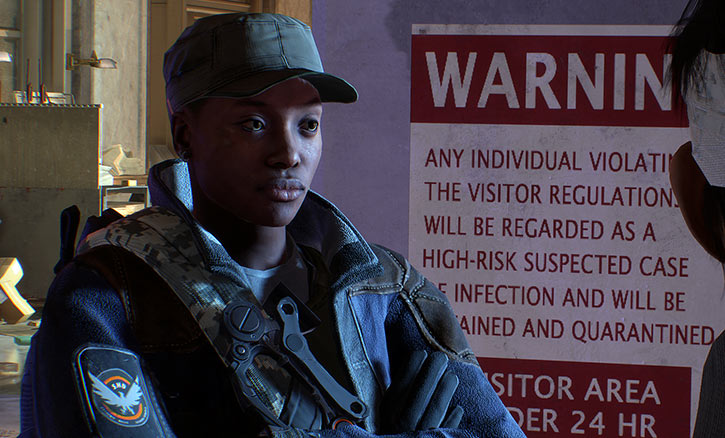 Not wanting to leave her friends, Yetayesh served for ten years. But that meant giving up on med school.

Knowing about this, Col. Roni Herzog forwarded her a job offer in America.

Attractive offers for Israeli troopers by American companies were common. This offer was particularly lucrative. It specifically paid for Snapir marines who had beta-tested the experimental ISAC systems.

In fact, the offer probably was too attractive.

The offer was to get a salary, a Green Card and the naturalisation fast track for essentially nothing. She’d have to maintain full combat readiness and to stay in New York City, but that was it.

Her head filled with images from her extensive stash of blaxploitation movies, Yetayesh signed up. As her new identity she picked “Sahara Jackson”. It was a mix between Carl Weathers in Action Jackson and Tamara Dobson in Cleopatra Jones.

Ms. Jackson’s goal was to enter a pre-med study track as an adult student. But first she needed to improve her English, and validate equivalencies with her Israeli high-school diplomas.

Friends of Col. Herzog got her a part-time position. “Sahara” worked as an advanced Hebrew teacher and Israel trips organiser at the Beth Elohim temple in Brooklyn.

Some of her students then got her another part-time position as a physical education teacher at a magnet school.

Though Sahara was big on what she imagined Black American culture to be, the rabbis at Beth Elohim encouraged her to keep her accent. She’d be safer this way. People would mentally frame her as an Israeli who happens to be Black, rather than as an African-American. 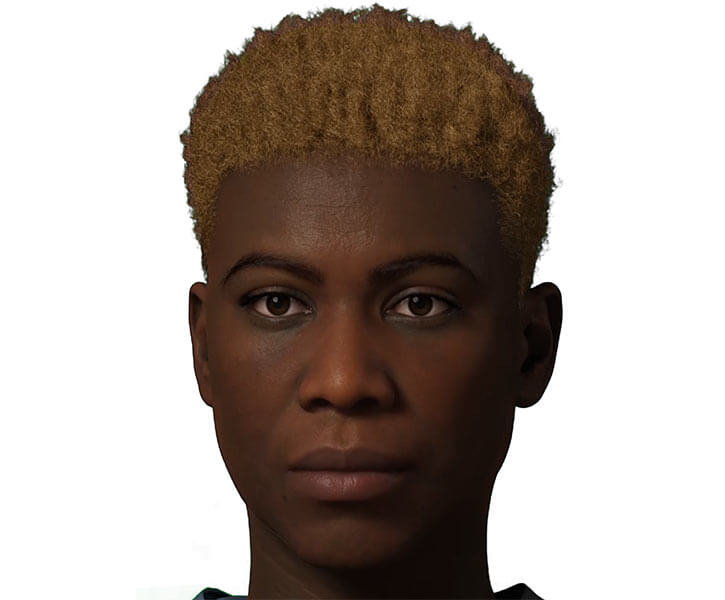 Her true employers also issued her with a M9 pistol, a MP5N submachinegun, a next-generation ISAC system (including a smartwatch to be worn at all times), and stacks of procedures.

But as an operative of the Strategic Homeland Division (SHD, or just “the Division”), she was a sleeper agent. She had little to no contact with any colleague, and was encouraged to have a full ordinary life. Communications were ISAC-encrypted, then usually self-deleted.

The more Yetayesh/Sahara read those communications, the more she worried.

This article continues in its second half. 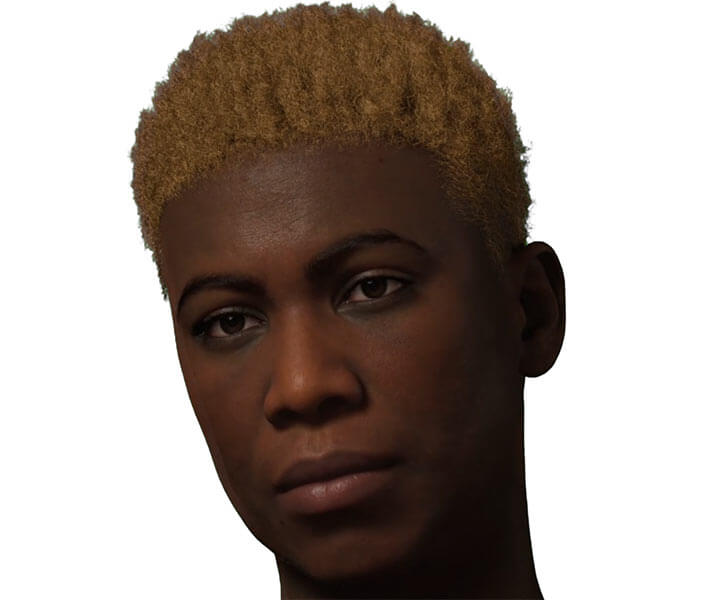 Source of Character: Base on Tom Clancy’s The Division (video game).

Helper(s): Darci. P416 picture are from the IMFDB  , SCAR picture from the manufacturer.