Sai is an accomplished martial artist and acrobat. She is skilled enough to engage Colleen Wing.

Sai was one of the chief agents for Lionmane. She led his soldiers in a boarding action against a freighter carrying a valuable statue of Chinese heroine Mulan .

She later helped defend Lionmane’s secret base against a team of Heroes for Hire. But she whimsically attacked Colleen Wing with Wing’s own swords. Being less competent with swords, Sai was defeated.

Sai might be Chinese, albeit with green eyes. Those things happen, especially in comics and in Big trouble in Little China.

Her hair is dyed a bright shade of red, possibly in imitation of some South Korean pop star or another.

Sai seems to be a whimsical weirdo. She must be really tough to have survived that long if she insists on making weird choices in combat just because the idea sounded neat.

She always speaks in English like in the quote. Her vocabulary seems OK, but her grammar is creative. And, you’ll note, incoherent.

She comes across as bored and flighty, and wishing her life was a combination Chinese swashbuckling flick and Korean romantic situational comedy.

Sai: “Captain ? Be waking now. Your ship is taken over by pirates.”
Captain (waking up): “Huh ? Wha—- ? Pirates ?!”
Sai: “Yes. Myself am one. Myself am Sai. Opening safe for harbour fees now. Also, we require stone warrior woman. Denial… refusal… is death. For you. For all ship. You will come now.”

She may have fought Black Canary during an early Birds of Prey adventure.

Equipment:
Bladed sai (x2) [BODY 04, Enhance (EV): 01 (cap is 05), Enhance (Disarm Manoeuvre EV): 01 (cap is 06) ; Descriptors: Piercing, Blunt ; Note : OV/RV when using the Block Manoeuvre is 1 AP, Note: the OV bonus for the Shield Cover Manoeuvre is 1 AP, Limitation: Blocking bonuses can only be used against melee attacks, and the GM may rule that some weapons are too large for the sai]. 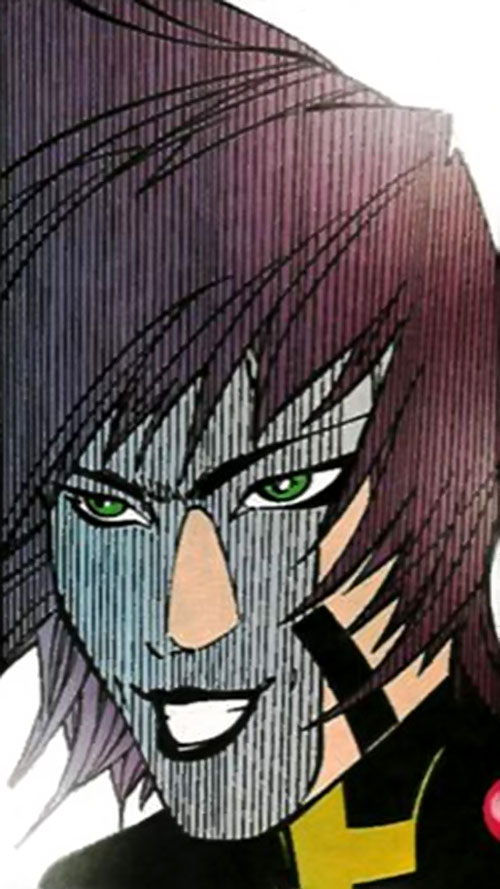 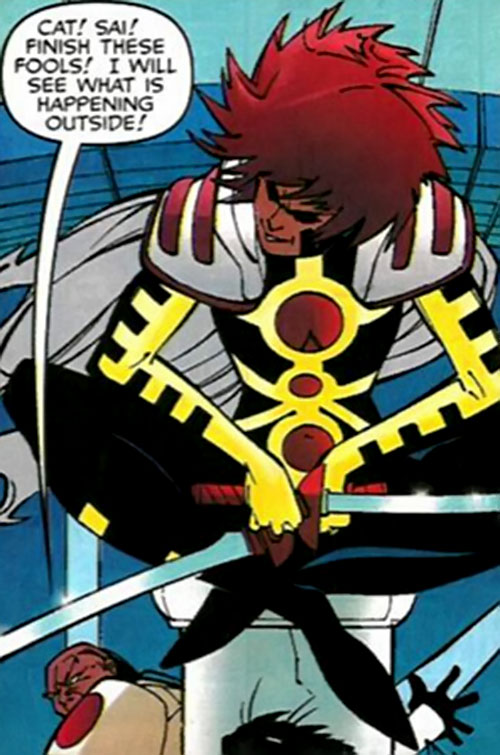