Cow and Chicken was a surreal comedy cartoon, mostly for children. It aired from 1997 to 1999. The titular characters are a cow and a chicken, called Cow and Chicken, who are somehow siblings.

Sailcat appears in the 12th episode of the first season.

Sailcat was a “Super-Invincible Cat,” until he got run over by an eighteen-wheeler truck.

He’s still invincible, but now, thanks to his rearranged internal organs, can also glide easily. He can also maneuver, particularly to cut into things with his claws, buzzsaw-like, from trees and trucks, to small tin cans.

Sailcat is also a rather pleasant cat, and always knows the right thing to say when someone isn’t feeling well. I suppose this is a power, given the fact that he’s a cat.

Out on the nation’s roads, where truckers make life hazardous to any creature not flying or already flattened, a cat ventured out on the highway, hunting mouse for food.

Suddenly, a cloud of radioactive compounds settled to Earth from outer space, changing the cat’s genetic and molecular structure. This him invulnerable—he coulmd no longer be killed or have his skin punctured. At that point, with a hideous splat, the cat was run down by a rather large truck.

As the song from the episode goes, “Well, he couldn’t be killed, but he still could be squished, and he lay in the passing lane, shaking his fist, and some kids helped him fly with a flick of the wrist—and that was the birth…of Sailcat !”

Flying after the truck like a buzzsaw (kept aloft on the winds), Sailcat sliced clean through the truck, splitting it in two, and horrifying the poor driver, who sent out a warning over the CB radio, “Breaker, breaker, look out—watch your back, be afraid. There’s a frisbee-like cat who’s a mighty sharp blade.”

So it was, that the reputation of Sailcat was made along America’s roads.

Since then, Sailcat has become the defender of roadkill-to-be, damming up roads with carved trees to allow even the lowliest animal to cross safely. However, Sailcat has also been known to help humans in need. Whether it be stranded mothers trying to cook dinner without can openers, or even just spending time with the downtrodden.

Nobody really believes in Sailcat’s existence, though. He’s more of a campfire legend (like Johnny Bravo ’s “guy with a hook for a head”) to scare young children, as far as most people know…

Sailcat seems to be a typical orange tabby/mixed stray cat, except that he’s been flattened from side-to-side. That is, when viewed from the side, he’s got a back, a tail, an ear, an eye, and legs.

Sailcat is near violent when saving the downtrodden (and about-to-be-trodden). But he can also be quite friendly, to those who have done good deeds.

“Don’t be depressed, Cow. People love ya *because* you’re big and fat and ugly. Go with it !”

The obvious route would be to link him up with the Amazing Zoo Crew, or the non-Earth-C animal heroes (Underdog, Hoppy, Mighty Mouse, Fox’s Cosmo Cat, Charlton’s Atomic Mouse, et al).

Or a genetic engineering experiment along the lines of Amazo. “Gliding on air currents” from Wonder Woman’s Post-Crisis concept, Superman’s invulnerability, etc.).

Clearly, though, obvious is no fun. So, instead, just drop him into the DCU whole cloth, as a misunderstood ecoterrorist who just happens to be a cat.

I chose not to give him Local Hero (environmentalists) just because there’s no evidence for it. Only those who have contacted him adore him.

Source of Character: Cow and Chicken cartoon (Cartoon Network), “The Ballad of Sailcat”. 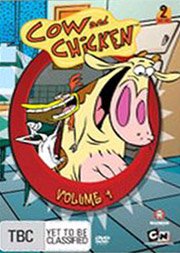