Salamanca seems to be a powerful bruja and occultist.

Salamanca has strong astral  projections capabilities. While in spirit form she can be seen and heard in the material world if she wishes. She was able to fly from the Argentine spirit world to the Moon very quickly.

It has been said that her power over the elements is roughly comparable to that of the classic Zatanna. She’s also been described as a weather manipulator. The bulk of our game stats is based on this description. 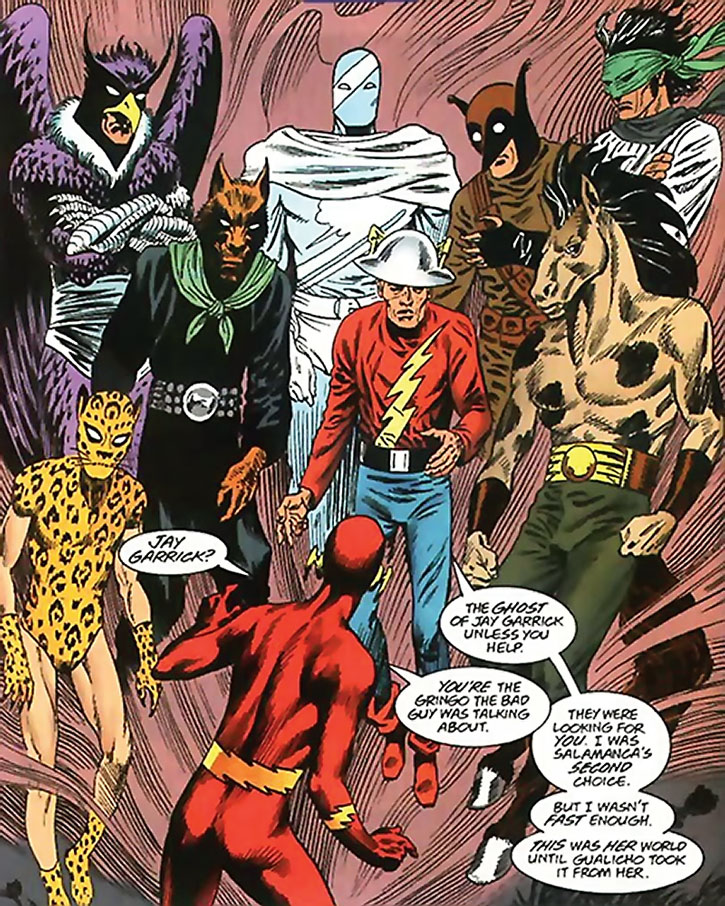 Clearest picture of the Super-Malón team.

Winged flight, taloned gauntlets. The cachirú is a mythical bird with magical powers over the bodies and souls of men. Its arrival heralds tragedy, but it is possible to appease the cachirú with alcohol.

Superspeed. Literally “the jaguar”. Being the largest predator in the area, jaguars were often associated with warriors in older mesoamerican and Andes cultures. El Yaguareté did not seem to actually have superspeed in his sole appearance, and it would be a curious attribute for a jaguar-themed characters — jaguars are ambushers, not sprinters.

One possibility is that he’s a shapechanger liked the Yaguaretés Abá in guaraní stories. These are warlocks who can turn into large, murderous jaguars.

A wolfman. Presumably connected with guaraní werewolf myths, which like the werejaguar myths have all sorts of local variations, exotic vulnerabilities, strange rituals, etc..

Air control. The pampero is a powerful cold wind from the South.

Master thief. His name may be a typo of vizcacha, a sort of rabbit-chinchilla living in the Pampas. The mask probably is a stylised vizcacha head.

Wild swashbuckler. Cimarrón is an adjective meaning a once-domesticated animal who returned to a feral state (or whose ancestors did). By analogy it is also used for escaped slaves (and is the origin of the English term “maroon”).

Superhuman strength and speed. A bagual is a cimarrón horse, or by analogy an untamed young horse. In the Brazilian Pampas it means a stud and by comparison something virile and impressive – this usage might also exist in the North of the Argentinean Pampas.

The word comes from the name of an enslaved querandí chief who broke free and survived as a raider attacking European settlers.

Sorcery, astral projection, group leader. A salamanca is a sort of akelarre (witch’s conclave) in the Argentinian folklore, and by analogy the cave where it takes place. Salamancas are close to witches’ sabbat in varied European legends. They thus involve partying, strange ceremonies, braving obstacles and making deals with the Devil – with the usual risks.

The word “malón” in itself is a type of cavalry raid that was historically done by the various mapuche peoples in southern South America. It is a sudden pillaging raid, often punitive in nature, where what can be carried away is and the rest is set on fire. The intent of the writer may have been for the group to be called the Raiders (Incursores) in Spanish.

The themes of most members — Salamanca being a notable exception — are evocative of a specific area of Argentina, the Pampas. This milieu cover Northeastern Argentina, Uruguay and a bit of Southern Brazil. The team’s base of operations in Buenos Aires is in the Pampas, so Super-Malón may be the heroes of this specific area rather than Argentina as a whole.

Salamanca is the leader of Super-Malón. This is apparently the main group of superhuman protectors in Argentina – possibly the only one.

In 2000 the team was taken by surprise and captured by Gualicho, a foe of Salamanca (a gualicho is a sort of curse). His main allies, mythical creatures called los Peteys, had tremendous levels of superspeed.

To counter this, Salamanca astrally contacted Flash (Jay Garrick), who failed, and then Flash (Wallace West) who succeeded in freeing Salamanca based on Jay’s experiences. Salamanca then trounced Gualicho.

Later the same year Salamanca and her ex-lover Cachirú teamed up to fight a vengeful ghost in Buenos Aires. They solved the case by reuniting the powerful spirit with the shade of his long-lost love.

Wrath of the Cheetah

In 2002 a riot nearly broke out in front of the corporate HQ of corrupt industrialist the Cheetah (Sebastian Ballesteros), in Buenos Aires. Salamanca, Pampero and el Yaguareté intervened to persuade the crowd to back down.

They seemed more or less successful until a spirits-possessed Cheetah (Barbara Minerva) charged in to kill Ballesteros, seriously wounding el Yaguareté while he was talking with protestors.

The two powerful Cheetahs started fighting, which freed the captive and psychotic Silver Swan. Thankfully, Super-Malón was soon reinforced by three Amazons (Diana of Themyscira, Donna Troy and Cassandra Sandsmark), which gave them enough space to evacuate civilians from the battlefield and control casualties.

In 2005, during the Day of Vengeance crisis , Salamanca was one of the mystics who fed magical energy to Captain Marvel so he could fight the Spectre on an equal footing.

Salamanca is the team member whose look least evokes the Pampas. Hers strongly resembles traditional clothing and adornments from the Noroeste Argentino, with Incan influences.

Private, aloof, serious and mysterious mystic type. She very much seems to follow the Magician’s Code.

She reportedly can be very warm and friendly, but that seldom happens – perhaps for mystical reasons.

“I do not need my full power to crush an insect.”

“A spectral mazorquero . They were remorseless manhunters in their day.”

“Return to the land of the dead. Your time among the living is over.”

Source of Character: Planet DC (Annuals during the year 2,000 in the DC Universe). 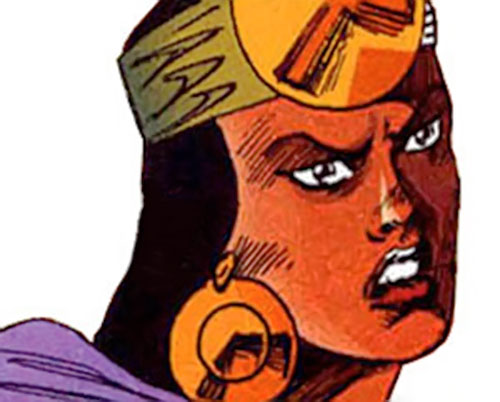 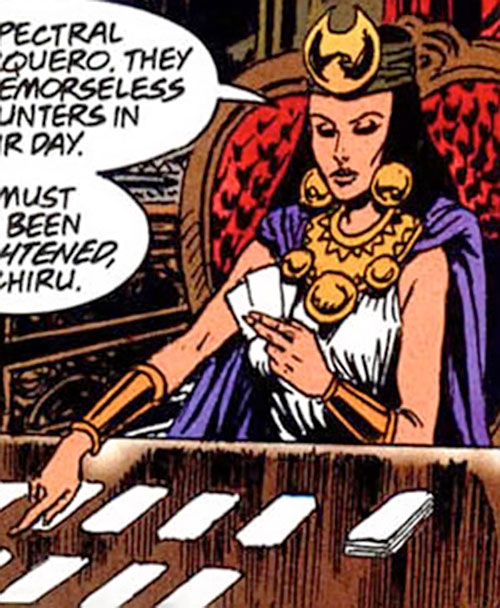 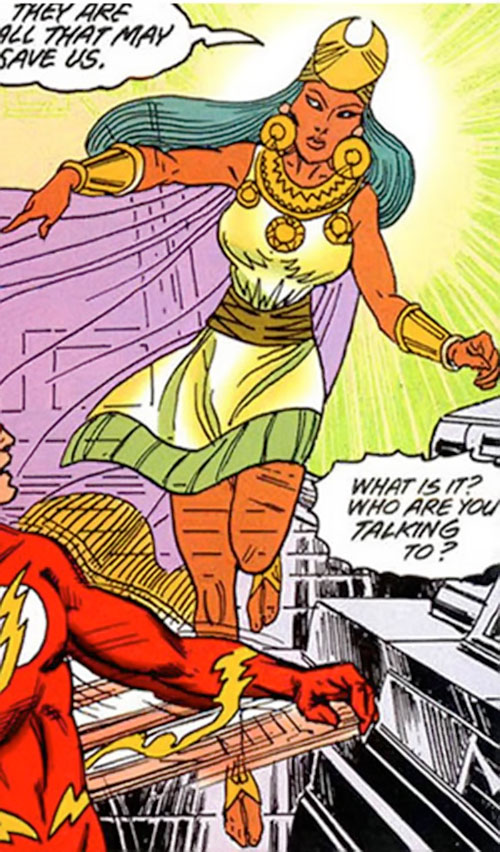 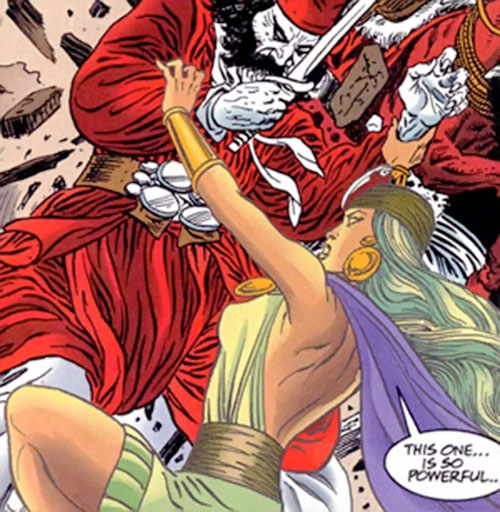