This curious team/clan of magically-powered superhumans first appeared in 1977, in Fantastic Four. They clashed with the FF on several occasions over the following decades.

This article was copied from one of the better super-hero homepages way back during the 1990s in case the site disappeared. And it did. We keep it around as a placeholder for when we redo our Salem Seven entries.

The sons and daughters of Nicholas Scratch despised the normal humans who had hunted their kind ages ago. Like many half-supernaturals, they were residents of New Salem, a hidden Colorado village of witches and warlocks.

In 1977 Scratch’s mother, Agatha Harkness, was put on trial for living in the human world. Her grandkids were turned into “a supernatural squadron” to act as security guards. They were overcome by the Fantastic Four, then watched their community become more tolerant of humans while they fell out of favor.

When Scratch returned from extra-dimensional exile, the Seven instantly threw in with him and his plans for witch-and-warlock world conquest. 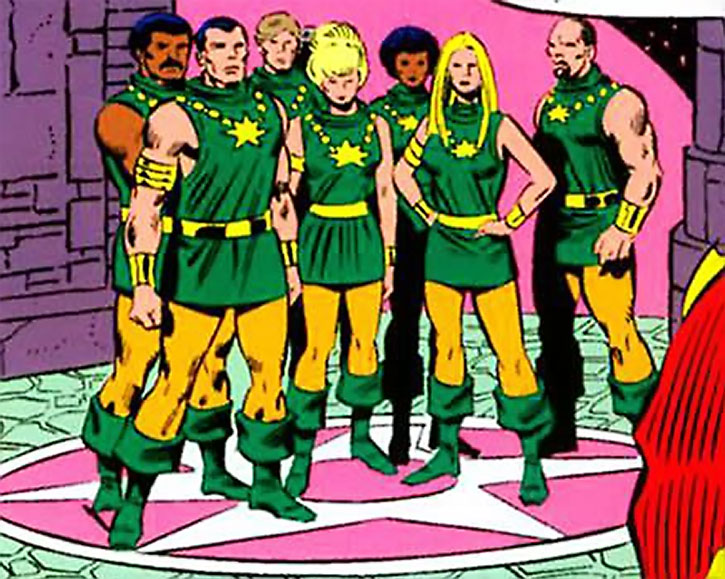 All New Salemites were familiar with occultism. With the extra magic given by Scratch or stolen from others, the Seven could tap into other dimensions plus create power spheres, swarms of locusts and other effects. Mostly they just changed into superhuman beings (their second transmutation was more powerful, their third evidently permanent). 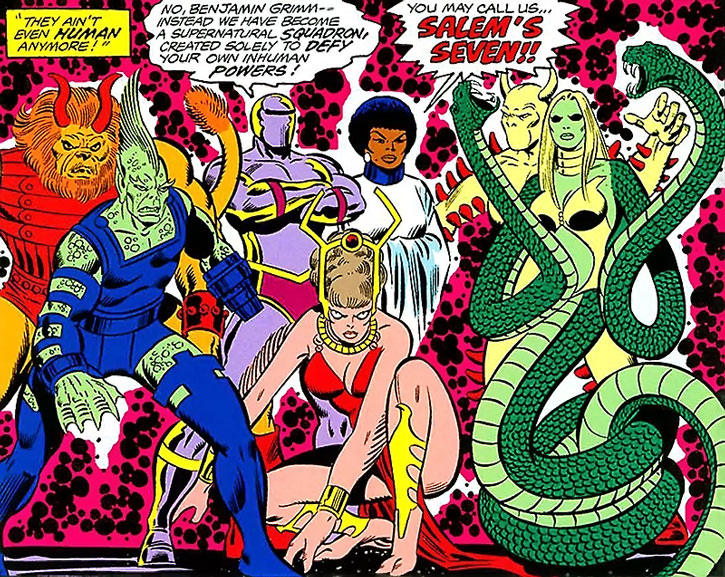 Scratch knew the Fantastic Four would follow when Franklin Richards and Harkness were abducted. So the Seven were “created solely to defy [their] inhuman powers”. Ironically, they lost when Brutacus crushed Reed Richards’ stretching “auto-extensors” gloves (he lost his powers, see?) and that artificial ability cancelled theirs.

The Seven later pasted the FF twice. Once the Scarlet Witch and hubby Vision wandered into town and nearly got sacrificed. It was in combat with the android that Vertigo lost control over the combined power of 665 New Salemites, demolishing the village. While all the residents were declared dead on the spot, only the deaths of the Salem Seven were ever confirmed. 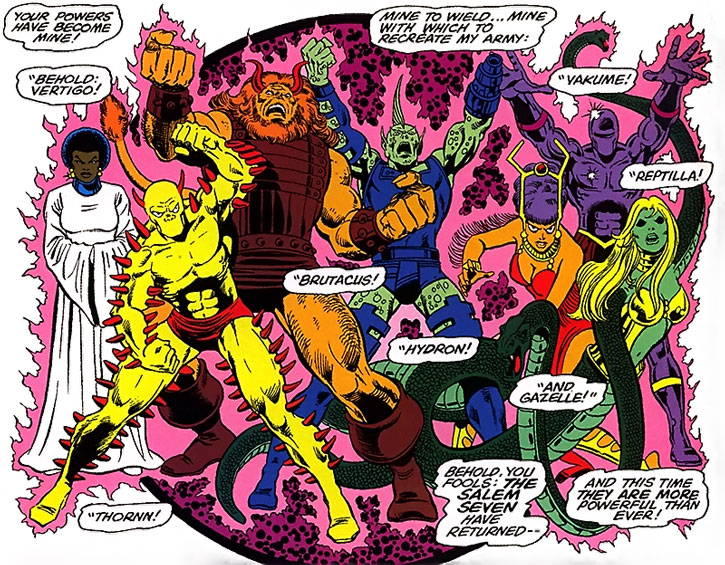 Many of their family get-togethers included ritual sacrifice. First they tried draining the FF on a New York field trip to bring Scratch in. They burned Harkness at the stake after seizing power (she got better), then they BBQ’d their own sister Gazelle just to keep warm in winter.

Guess they weren’t toasty enough when Thornn dragged Wanda into Samhain’s death-realm to steal the life energy of her unborn child (later twins, still later imaginary figments). And they claimed they were the persecuted ones !

By Ray Schaff (copied from Jeanne Burch’s site, which used to be at http://www.sigma.net/burch/).