Sally Sonic can “turn [her] whole being to magical, super-sonic vibration.” In practice this means that she’s endowed with “supersonic strength” and attendant superhuman durability.

She can also fly – our game stats assumes a supersonic speed.

Sally Sonic seems to still have some skills from her days as a teenage sleuth.

Sally Smart was born in 1930, apparently in the English countryside. During the war, she had a short career as a teenage sleuth. Sally investigated small local mysteries in the style of children’s books of that day – she was a contemporary of the earliest Famous Five  novels by Enid Blyton.

Wrapping up one her cases, Sally brought back a cat kidnapped by other children to his owner. To thank her for finding her cat, the odd and elderly lady gave Sally a magical whistle. Thus was Sally Sonic born.

From 1945 to 1954, Sally had a wonderful career as a popular, magical heroine. She caught robbers in domino masks and stripped shirts, she shared adventures with the aces from the RAF. Her best friend and ally was Barnabus, the Teddy Bear King – quite literally a magical, man-sized animated teddy bear wearing a crown.

Her family doctor determined she would remain eternally 15 or 16, and might be able to live forever.

Back to life, back to reality

In 1954, Sally’s parents died in a car accident – which likely was a disguised assassination. While Sally was 24, the NHS  refused to believe that she wasn’t 15 (one suspects that all official documents about her had been stolen) and she was sent to a ghastly orphanage.

While the upstanding Sally did her best to comply by the rules, the place was a perpetual nightmare of excessive discipline and corporeal punishment. At night, Sally Sonic would fly out to help people, but this often resulted in being punished and locked into a wardrobe for her unexplained absences. 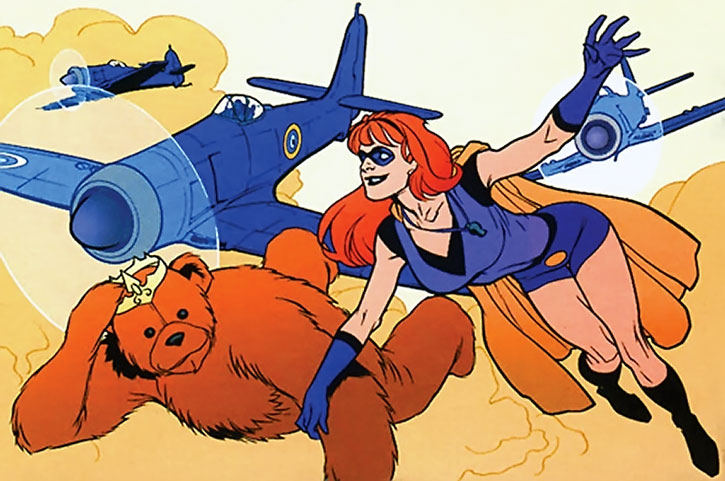 Sally eventually cracked despite her desire to be a good girl. While locked up in the “wardrobe of solitude”, she just punched through the wall and flew out, fleeing the orphanage. She went to London, where she planned to fight crime and evil like a good super-heroine should.

There, Sally Sonic met and teamed up with fellow superhuman defender Vitaman, with whom she fell in love. However, while he had been hailed as a hero for his deeds during the war, Vitaman was really a criminal and a ruthless opportunist.

He manipulated the naive Sally like pimps do, exploiting her adolescent appearance by selling her to the British underworld for pornographic shoots. During one such session, Sally Sonic was injected with the serum of evil originally developed by Dr. Jekyll.

The serum turned the goody-two-shoes, ingenuous young woman into a depraved psychotic. The triumphant Vitaman then revealed that it was the last step of his decades-long revenge plan against her father. Judge Smart had condemned him and his brother to 10 years in prison before the war.

Sally no longer cared about such things, though.

Between the evil serum, and a life that had gone from the wonders of an eternal childhood to the manifestly squalid, Sally was warped inside. She wanted to hurt women who had a happy and fulfilling existence.

One of her marks was Professor Lance Harrower, a successful researcher. While his young wife was exceptionally beautiful and gifted with a super-heroine-like physique, Mr. Harrower was obsessed by how she would look when she got older.

He was consumed by his obsessions about eternal youth, power, fame, hard bodies and invulnerability – in short, superhumans like Sally Sonic.

Through hundred of e-mails, Sally leveraged his neuroses and convinced him to try his latest research on himself in utterly unsafe conditions to gain power. Harrower died from exposure to his special compound and infected his wife, who survived and gained superhuman powers.

Sally Sonic’s psychotic hatred focused of Mrs. Harrower. Not only was the young widow a symbol of everything that Sally hated, but as the very reluctant superhuman Bulleteer she was investigating to find the person responsible for the death of her husband.

As “Sara Smart”, supposedly an art student who had just come from Great Britain, Sally became a lodger at Mrs. Harrower’s home. Eventually, she ambushed her and attacked.

Being far more experienced and vicious, Sally Sonic had the upper hand. The Bulleteer was a gentle and sensitive woman and lacked any sort of killer instinct. However, even Sally’s great strength couldn’t genuinely damage the Bulleteer’s chromed, airbrushed metallic body.

Sally Sonic ran out of steam, and the Bulleteer mauled her with an engine block to make her stop. Scared that she may have seriously wounded her self-proclaimed nemesis, Mrs. Harrower drove the unconscious Sally Sonic to the nearest hospital since no ambulance was available.

During the rush to the hospital, Sally Sonic woke up and, consumed by blind hatred, tried to wrestle the wheel away from Mrs. Harrower. This sent the car crashing, and the collision killed Sally despite the Bulleteer’s efforts.

Just like Sally Smart’s life had been wrecked solely for vengeance against her father, Sally Sonic’s death was but an instrument. Her last, enraged action was but one of the many small things that fulfilled a prophecy made several million years before she was born.

As a kid Sally Sonic had a wonderful, dream-like life. Now she is warped, bitter and neurotic. She wants to destroy the lives of other women who have what will be forever denied to her – a well-adjusted, loving adult life.

Sally blames the entire world for what she has become. She refuses to accept that anybody undergoing the same horrors would not end up as warped as she is. She proves it over and over again by preying on husbands’ weaknesses to destroy wives.

Since she looks like a pretty, innocent 15 or 16-year old she is forever denied all the privileges of adulthood (she cannot even get a beer in most US bars) despite being 75. This is an additional source of senseless dissonance in her life, alienating her further as her eternal youth and seeming innocence are nothing but a curse.

“Sounds like bad things happen to people when they put costumes on. It must be horrible to be like that girl Thumbelina. It could make you mad.”

“Not so bloody smart now, are you ? You let me walk right into your precious home !”

“Your beloved husband told me everything about your bland, boring life together. How you refused to dress up as a superhero for him, even at Halloween. I know. Isn’t it pathetic ? Men. They’re all the fucking same. They all want the same stupid things from us ! And women like you drive them straight into the arms of women like me.”

“Did you feel safe ? Did you feel secure in your perfect little world ? Well, that just proves you were the one living in a fantasy world, not me.”

“Girl on girl fight scenes. Bullets bouncing off your chest. Men pay for that stuff. You’ll find out.”

“I didn’t ask for any of this. But this world… this world swallows you whole and changes you whether you want it or not. Until you feel like you’ve gone mad. You’ll see. Would you like some evil serum too ?”

Equipment:
Whistle of the Wind Kings [BODY 04, Bomb: 03, Insta-change]. Her magic whistle is on a chain around her neck. When she blows it to become Sally Sonic, it can emit a shockwave around her. 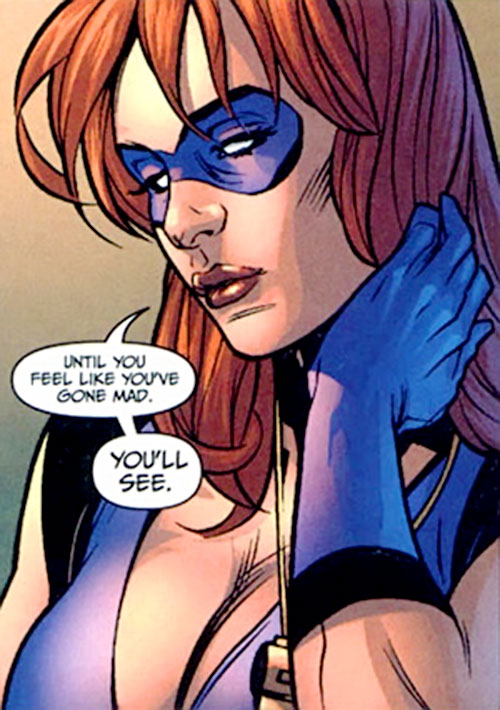 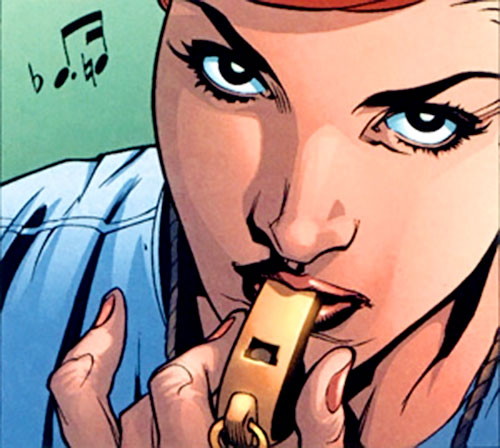