Salvador is a character from the Borderlands 2 video game.

If you’re not well familiar with the games, you should first read our Borderlands setting primer. Which also has technical DCH notes and other things.

The diminutive Salvador is enormously strong. Especially in his arms and shoulders.

His short legs do not seem to present any hindrance, presumably because of this strength.

His durability is also peak human, and he seems to have some sort of healing factorThe power to heal wounds and regrow tissues, like Wolverine.

Salvador could easily be a Pandoran mutant. A bit like Brick, and a bit like the “goliath” phenotype common among some bandit clans.

A firearms expert, Salvador is known for his ability to wield two guns at once. No matter how large, unwieldy or recoil-heavy they are. He could dual-wield a sniper rifle and a rocket launcher, in the unlikely case where it’d serve a purpose.

This is called “gunzerking”. Since it works better when Salvador is flush with adrenaline, making his grip on his ordnance even more vise-like.

Salvador is also oddly unconcerned with ammunition management. In-game, he can regenerate his ammunition stores, and inexplicably reload one gun whilst firing another.

Our suggestion is to rationalise that as an advanced feeding system. One that digistructs out or in his ammunition and magazines as he fights.

Salvador was given a rare slag Rubi pistol by Mad Moxxi. Dual-wielding a big gun and Rubi allows him to heal his wounds, slag his opponent, and add the Rubi’s firepower to his main cannon. This is a big advantage.

I’m not sure I’m going to have that many opportunities to drop some French-Chilean old-school rap here.

Salvador is from Pandora, and may have been born there. He and his abuelaGrandmother. lived in a village called Ovejas. Though one assumes that the locals didn’t actually raise sheep.

Folks in Ovejas seemed to have a mix of Anglo and Spanish names. So it might resemble some areas of the Southwestern US.

Goodbye to the village

Salvador apparently always was a murderous hardcase. He killed many people, and has an interminable rap sheet. But it would seem :

One day, Salvador massacred four men who were attacking his grandma. Salvador called them bandits – and, given their monikers, he likely was correct.

But the villagers refused to believe him, for unrevealed reasons. Perhaps they had gotten scared of the savage gunzerker, and feared that he would one day turn against them.

In any case, Judge Chavez sentenced Salvador to hanging. 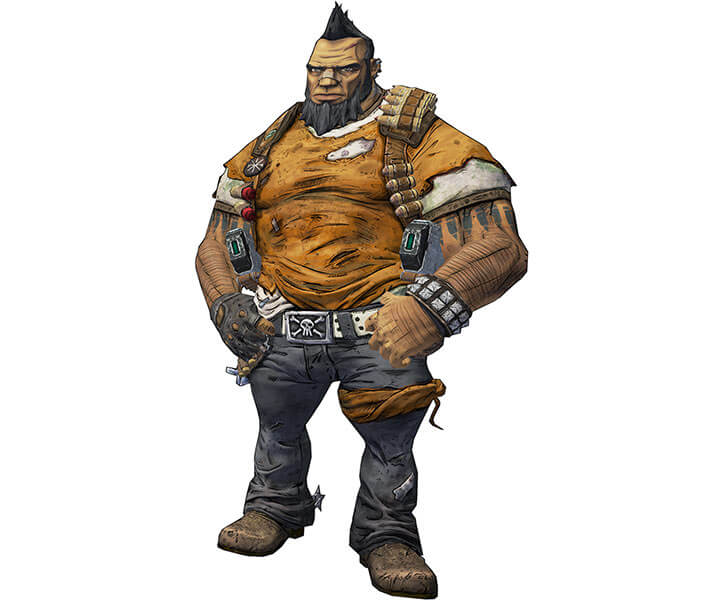 These are originally shot as 5160x2160px BMPs, to offer a clean look at the character art. It’s a convenient format to work with, too.

As the judgement was rendered, a Hyperion recon team came in.

Hyperion was apparently just beginning its takeover of areas they intended to mine for Eridium. The troopers opened fire immediately after a perfunctory warning.

Attempting to save those about to hang him, Salvador engaged the Hyperion forces. He eventually prevailed, but Ovejas had been destroyed.

Those who walk away from Ovejas

The notion of a Vault intrigued him. Since Ovejas had been razed, he decided to leave and become a Vault Hunter.

Salvador speaks English with some Spanish words. Most of the latter are terms that most Americans will easily recognise. Maybe he’s a fan of vintage White Tiger (Hector Ayala)’s version of Spanglish.

Sal described himself as “a fist with hair stapled to it”. Which isn’t entirely wrong.

He likes an unrevealed brand of cigars.

Salvador appears to mostly be a less-than-sane mad dog, who exults in carnage.

However, he has a crude but stringent code of ethics. From what little we can discern :

Many of Salvador’s quotes, skills, etc. allude to classic (and less-than-classic) action movies and thrillers.  Presumably he’s a genre fan. 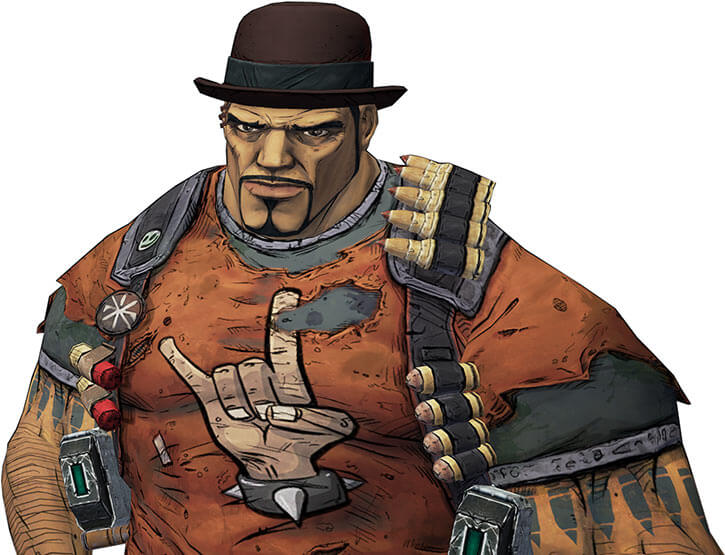 Here are the custom look I usually run on my Salvador, in case you were all “hey, I wonder what whatsisface over at… that website uses in his main Salvador save”.

Both generations of Vault Hunters (Low).

This is Salvador circa level 37, with a mix of skills.

Ordnance is vaguely based on what I happened to have when I finished Normal difficulty. “Vaguely”, since the visuals push Salvador as dual-wielding long guns while the mechanics push toward dual-wielding pistols.

Borderlands 2 builds are mostly about the Action Skill. And Salvador’s Action Skill boils down to “he can fire two guns a lot, really hard”. The subtleties (such as the Money Shot skill) don’t translate. So yeah, the stats look a bit flat, I agree.