Salvage is loaded to the gills and above with hi-tech gears and homemade gadgets – probably more than 100kg of them.

How he can carry it around is unclear. Some sort of exoskeleton  is likely.

He always seem to have the right gadget for any occasion.

Salvage lives in an automobile dump in a trailer, along with a dozen dogs. His main activity is to salvage tech, turn it into homemade big guns and sell them to the Prime Movers, the most powerful gang in Steel Harbor.

When the Prime Movers told him about the Machine, he became determined to capture and analyse him. He was quite successful at first, but the Machine repaired himself much quicker than he thought possible. He ended up destroying Salvage’s gear to incapacitate him.

The Machine chased Salvage away and used his trailer as a base for some time. Since it had numerous data links the Machine found comforting.

A slightly crazed tech head, Salvage is quite cheerful and open.

He likes his dogs a lot (but likes his “stuff” most of all), and he’s quite confident in his abilities and the power of his homemade guns and gadgets.

“Wild. Total tech-flesh marriage. Putting this together could not have been easy.”

Exactly the type of character that is useful to have more or less in the background, to equip your goons and villains. In the DCU, he could have some connection with Steel II. 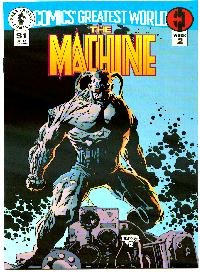