Salwa is an exceptional Amazon martial artist. Her very fast and acrobatic style emphases flurries of attacks and rapid, sweeping kicks to slam additional attackers to the ground and keep her from being mobbed. Most of her snap punches, snap kicks and sidestepping techniques are too fast to clearly register on ordinary film.

Many of her moves are the result of experience against diverse opponents and environments.

This répertoire of fast techniques is completed by precise, powerful kicks intended for use against opponents dazed by previous attacks. Those are chiefly axe kicks and jumping side kicks, with some exotic techniques against slower or easily confused opponents. Such as a variety of one-handed handstand kicks.

Despite her modest size, she’s a strongwoman even by Amazonian standards. This is the result of years and years of martial training, sort of like the Atom. She can press a large car clean above her head, albeit with difficulty.

Salwa of Bana-Mighdall was trained in one of the innumerable weapons-making techniques of her home. Her speciality was the slow enchantment of metallic wires that smiths can then work into filigree for ornate blades. This is a very slow technique where one wire takes weeks of work, pure metals, etc.

Though she doesn’t know blacksmithing, Salwa has learned to use the wires she enchants by wrapping them around her body (usually her forearms). Or, more commonly, working them into her dreadlocks.

Salwa has made several enchanted wires during her adventures to help her move and communicate. However each one is a major project, and extraordinary ingredients will usually be required.

She made a wire with a dimensional enchantment that can potentially get her back home. But she has no mean of dimensional navigation and has to cross the dimensions blind to gradually develop a sense of direction.

Salwa is a mortal Amazon, from the hidden realm of Bana-Mighdall. Often mocked for her short stature, she developed a competitive streak during her childhood. She intended to prove that she could beat any of her sisters – without even using a weapon. 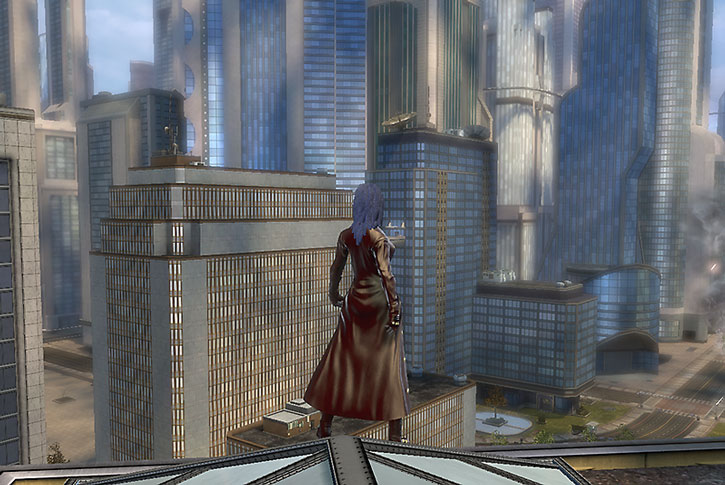 Her proficiency with unarmed martial arts earned her significant respect. She became better-considered than many of her physically more impressive sisters. This was key in gaining an apprenticeship in prestigious weapons-making techniques employing enchantments.

After numerous tribulations, the rogue Amazons of Bana-Mighdall were convinced by the witch Circe to attack Themyscira  by surprise. After two days of murder and war pitting Amazons against Amazons, Circe sprung her trap. She plunged the entire island, with all aboard, into a demonic dimension.

Both Amazonian cultures were thus forced to ally. But they succeeded in beating back the demon hordes.

Lost but not stranded yet

The allied Amazons eventually secured a perimeter around the city. The war-loving Bana-Mighdalls volunteered to (wo)man the security envelope. Meanwhile their Themysciran sisters could concentrate on rebuilding, setting up additional sources of food and the like.

There were frequent demon raids, as the Banas had hoped. During one powerful enemy push, Salwa and her squad were trampled by gigantic beasts. Survivors and reinforcements killed most of the beasts, and the would-be invaders had to flee.

But a badly wounded beast grabbed Salwa as she was dragging herself to safety with a broken leg. It presumably intended to kill and eat her after having fled.

In true Bana-Mighdall fashion, Salwa relentlessly hacked at the huge demon’s hand. She used a piece of the beast’s own nail that she had broken away. When the thing eventually collapsed from blood loss, Salwa was very far away from Themyscira.

Furthermore, she discovered that the demon had somehow stepped through several dimensions in its flight. The Bana was hopelessly lost among the dimensions with a broken leg, a concussion, numerous superficial cuts – and equipped with but a few pieces of shredded clothing.

After smashing a tree to bits to improvise a crutch and a splint, Salwa began her odyssey to orient herself and find resources. She hoped to eventually find a way home or craft the necessary resources. 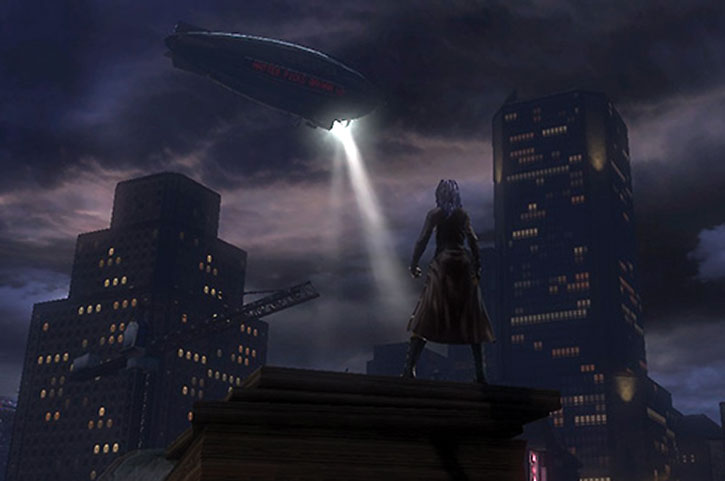 The Bana-Mighdall has built herself means of interdimensional travel. Howbeit; navigation is trial-and-error and cannot be attempted often.

(It’s just a little bit of flourish. I only actually played her in DC Universe Online.)

Currently she is getting close. Salwa reached a dimension that looks like a variant of the DC Universe. This place is experiencing massive creation of superhumans as all-out war against Brainiac erupts. Maybe the next jump ?

The Bana-Mighdall’s reputation as fighting-mad brutes and berserkers isn’t totally unearned. And Salwa is notably above-average when it comes to looking for a fight. However, to her it’s much more of competitive sport than war. She fights to win and to improve her skills, not to kill.

Since she’s been cut off from her tribe she’s been working as fists for hire. Her years of experience in very diverse locales have made her uncannily good at locating people who would like to see something beat up and can offer some reward. As long as the job doesn’t look too squalid, cruel or demeaning, Salwa is up for it. 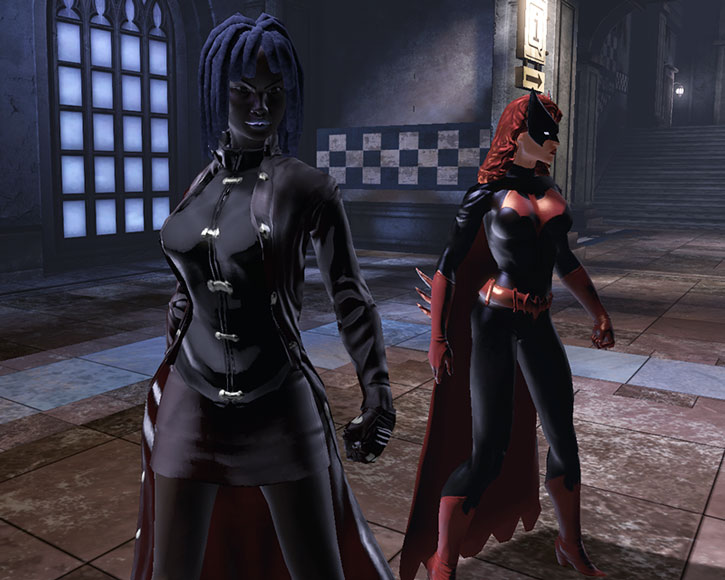 Salwa is long past homesick. She misses almost every aspect of Bana-Mighdall. That makes her cranky, and she complains a fair bit about everything because she wants to go home. In the meanwhile, she needs to let off steam – and if that involves beating some stupid gnomes or carjackers or venomheads or gnolls or whatever well, FINE !

Money is such a drag

The Bana is one of the least fiscally-responsible persons around. This is in part because her goal is to move on to different worlds. When she’s ready to move she blows whatever money’s left on small gemstones that she can shove in her pockets as portable, nigh-universal wealth.

The rest tends to vanish in liquor, gambling, companionship (though finding male prostitutes can be something of a problem on many worlds), fine accommodations, high-end massages, nice perfumes, stout tailor-made clothing to replace the damaged articles, and the like.

Being cut off from proper civilisation is hard enough, there’s no need to make things more unpleasant than they have to.

Source of Character: Heh, it’s just a character I made up to play DC Universe Online. She’s Mental/Martial Artist/Acrobatics, though the powers have been dropped for this version of the character. 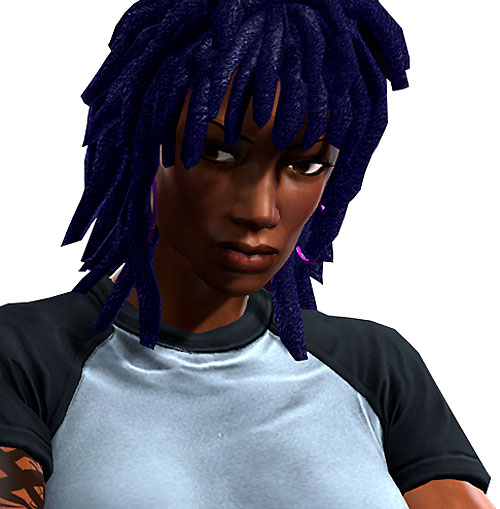 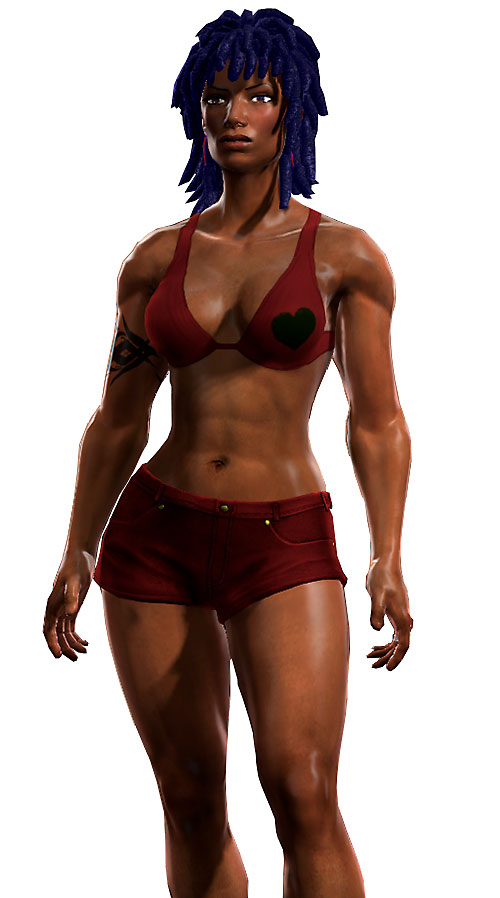 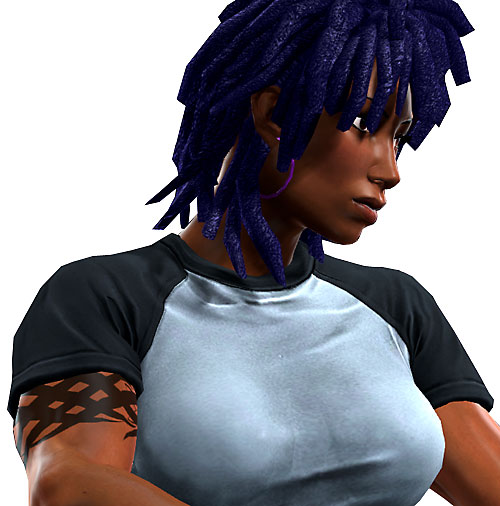 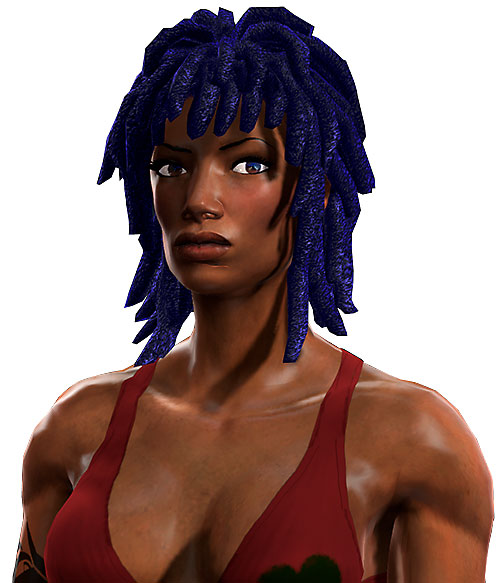 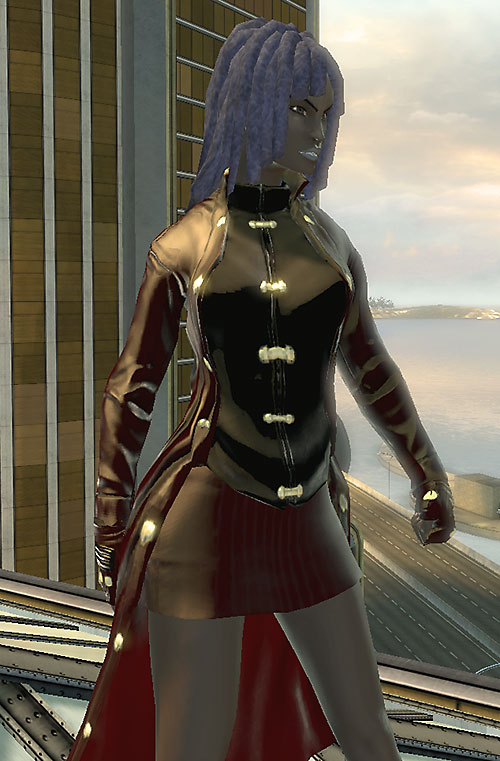 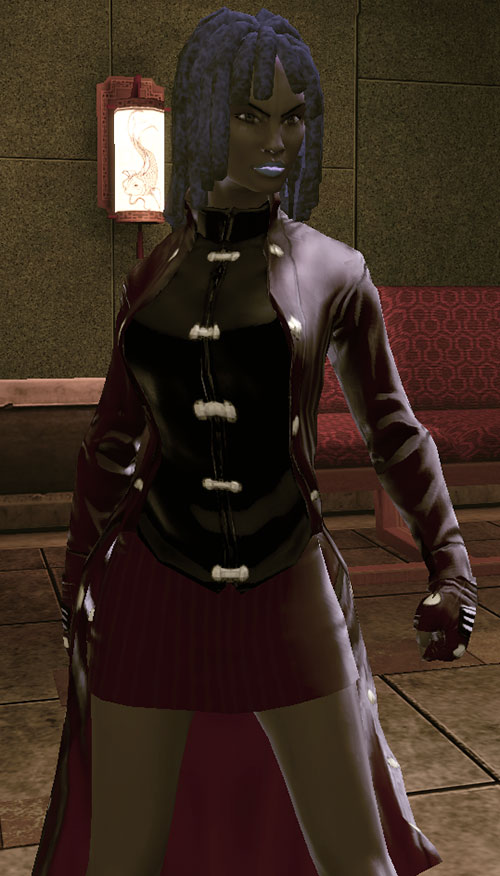 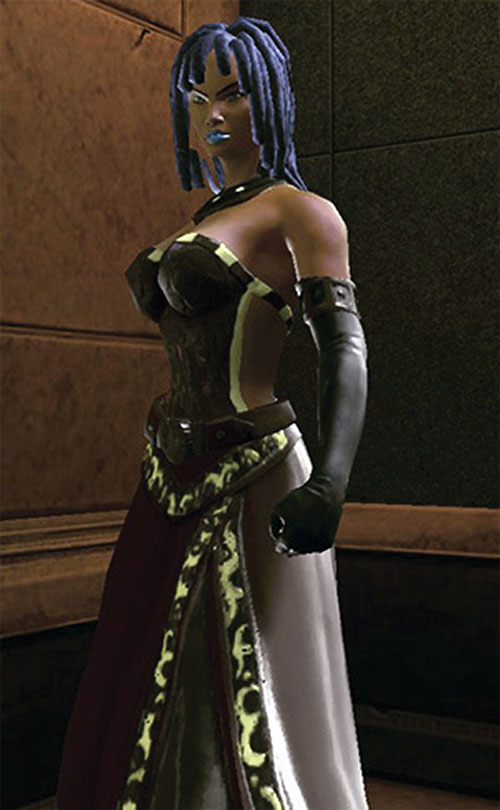 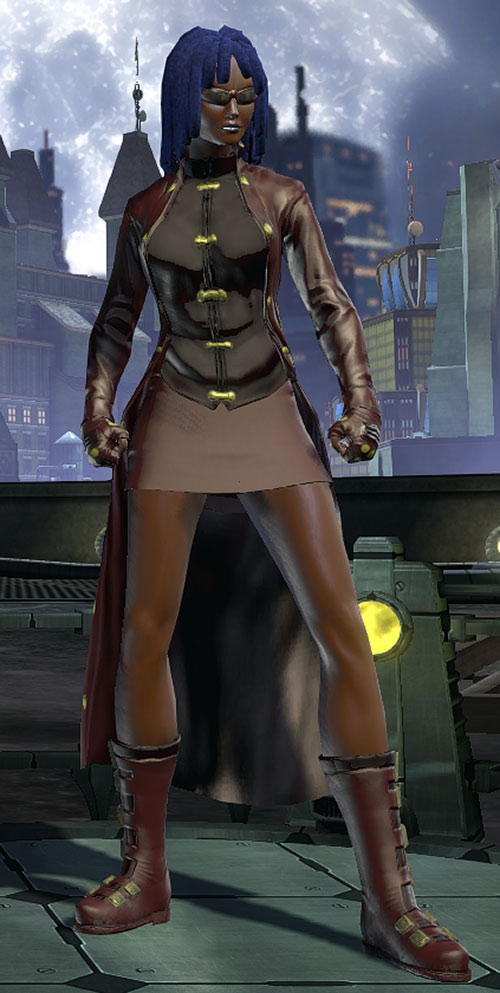