The Samaritan is the setting’s Superman figure – a perfect and immensely powerful super-hero. However, this means crushing responsibilities. The main Samaritan story is about how it feels to be a man who can, will, and must stop an impossible number of calamities and crimes.

The Samaritan is suffused with the very energy of space-time, which he calls the “empyrean fire”. Which is technically a pleonasm, though “empyrean” is meant here in the later sense of “energy of Creation”.

This gives him immense superhuman strength and reflexes, plus enhanced physical and mental acumen. He can hear much further than humans can, needs very little food and drink, and can function with reduced sleep. His body is apparently protected by a subdermal energy shield.

The empyrean energy probably enhanced his charisma. There is no indication that he was exceptional back home, but just a few words in 1986 convinced everyone that a new era had begun.

His most spectacular powers are flight and telekinesis. Samaritan’s top speed is in excess of 5,000,000 mph, and thus sufficient to reach any point on Earth within about 6 seconds.

Impossibly, his flight results in no environmental disturbance. Not even a sonic boom. He can fly right next to people (albeit at a reduced speed) and they’ll just be briefly buffeted by a strong wind.

His telekinesis is the ability to cast a sort of immense, impregnable webbing, net or clingy film. A person of object “wrapped” in empyrean energy is protected against almost any assault – a titanic empyrean wall once stopped a major tsunami just as it crested, though some aftereffects got through (if only due to local air pressure).

The Samaritan can also manipulate objects caught in his empyrean energy, a bit like a Green Lantern would with the classic pair of gigantic green energy hands. He can thus handle thousands of tonnes. Most times, the empyrean fire is used as a wall or shield.

The Samaritan is ably assisted by his techno-organic computer called a zyxometer. It is a sort of programmable artificially intelligent search engine/newsfeed. It scours a vast number of information sources (primarily computer networks and airwaves) and informs the Samaritan of crises through the world that require his attention. 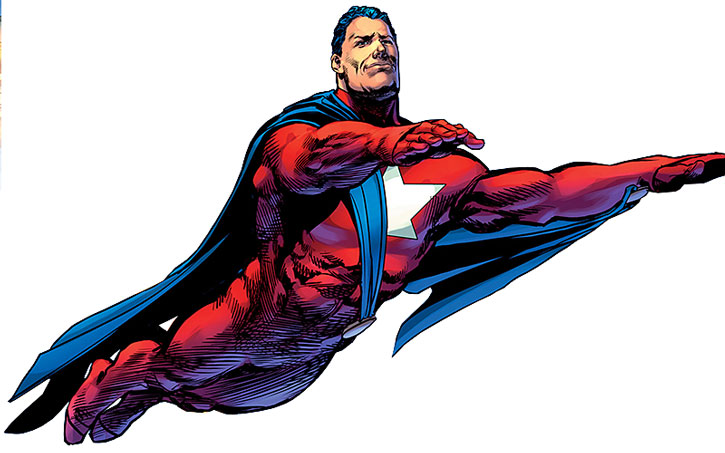 It is also programmed to do his fact-checking job in his stead.

There’s a terminal implanted in the Samaritan’s earlobe, so that the zyxometer can talk to him through some sort of very advanced radio.

Another resource is “the closet”. This seems to be a tiny limbo dimension that the Samaritan can access by fully relaxing and an effort of will. ”The closet” seems to be chiefly used to store and display the innumerable decorations, distinctions and gifts the Samaritan received over the years.

As a time traveller suffused with space-time energy, the Samaritan will remain untouched when the past is altered. This remains true even if the alterations in the past make his existence paradoxical. The whole world will be retconned to a new state, but the Samaritan will be unchanged and keep his full memories of the previous continuities.

Based on the example of his foe, the empyrean-powered Infidel, it is possible that the Samaritan is immortal, cannot be deprived of his empyrean energy, and cannot be killed.

It also seems possible that the Samaritan has other powers, perhaps having to do with time travel. He doesn’t seem to have aged since his first appearance, whereas most Astro City characters age in real time.

Thanks to his power and presence the Samaritan is, despite his humble personality, considered to be *the* super hero by most.

The Samaritan comes from the XXXVth century. In this future, the Earth is ravaged by environmental disasters and radiation, and practically barren. Even with all their technology, the few human survivors have perhaps one generation left before extinction.

Everything was lost, but mankind knew very advanced physics. A mission into the past was thus planned to prevent the disasters from occurring in the first place. An agent, the future Samaritan, was selected. 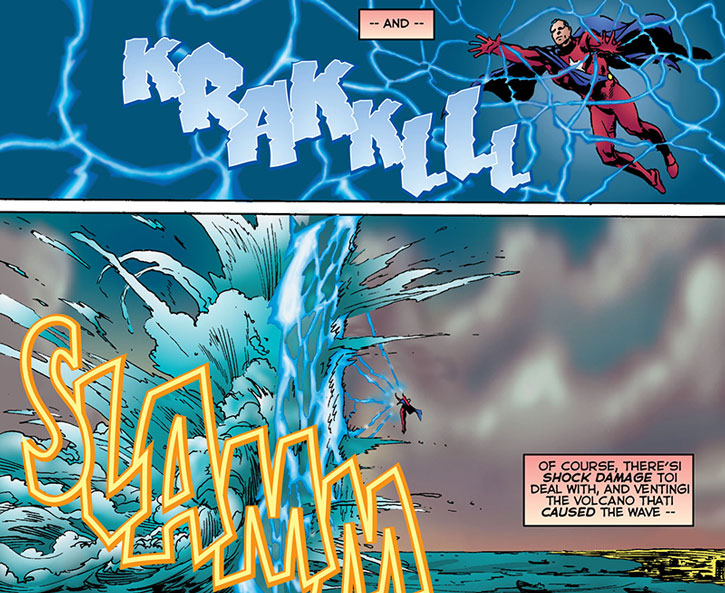 The objective of the mission was to prevent the Challenger space shuttle disaster . The agent wasn’t told why, though he hypothesised that a descendent of a crew member would become a major historical figure saving the future.

The agent was to infiltrate the early 1980s, and presumably make sure that the defective O-ring in one of the boosters was fixed.

However the first and last attempt at time travel from this XXXVth century did not go as planned. The agent was swept by the timestream and charged with the energies of spacetime. Though he arrived in late 1985, the overwhelmed agent spent weeks desperately reining in his mind and body.

In late January, he intervened at the last minute, shielding the shuttle from the explosion and safely taking it back to Cape Canaveral.

The press called the hero “the Samaritan “. The spectacular rescue was considered by many Americans as a clear sign that the “dark age” that had weighed down on the country and its super-heroes for more than a decade was now over.

From Jerusalem to Jericho

The agent used his zyxometer to create himself a full paper trail, and took the name “Asa Martin” before finding a job in Astro City.

As he would later discover, his mission had been entirely successful. A far more viable XXXVth century with a different history was retconned  in. However, this also meant that the relative past  of the Samaritan had never existed. 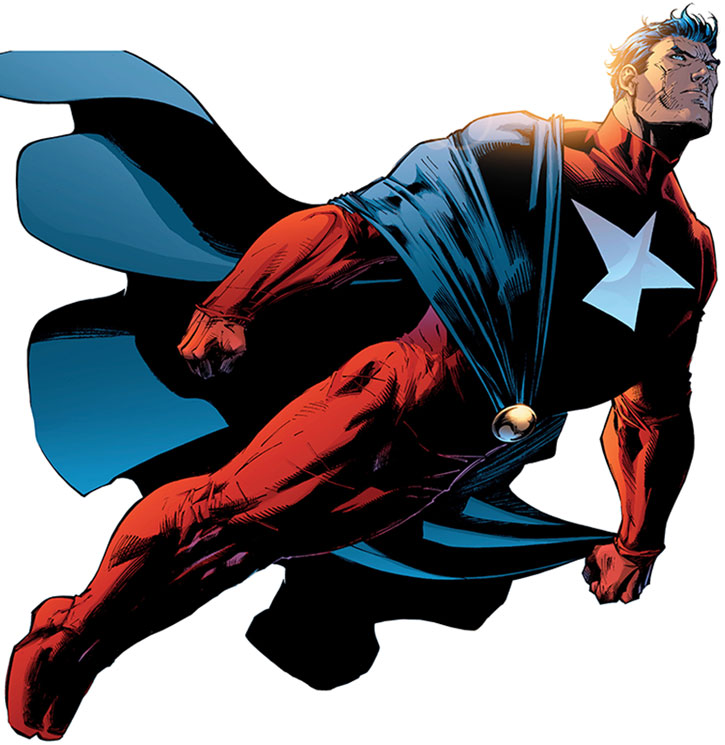 Feeling duty-bound to prevent yet more deaths and improve the future of humanity, the Samaritan remained extremely active as a hero. Since back in 1986 the Internet wasn’t all that, he got himself a job as a fact checker with Current Magazine so he would be warned of crises across the world.

He retains this position to this day. He always works with his door locked – since it’s actually the zyxometer that does the work whilst the Samaritan criss-crosses the world to endlessly save lives.

Considered by many as the world’s premier super-hero due to his power and presence, the Samaritan joined the Honor Guard. The Guard is Astro City’s equivalent of the Avengers or the JLA. He’s also led heroic efforts during nearly every major crisis, and is currently the leader of the Honor Guard.

Samaritan is a good-looking adult male, with an heroic but not bulky build and seemingly in his late 30s. He has blue hair of a medium hue. His costume is the bodysuit he was sent back in time with. It is red with a white symbol on the chest that looks a little like a stylized bird crossed with a star.

It covers his entire body except for his head and his hands, coming down to cover the wrists. The Samaritan also wears red gloves and a dark purple cape which is attached to his right wrist and to the left side of his waist.

As Asa Martin, he uses his power to bleach his hair white, and wears glasses plus business casual clothing. That he wears glasses means that nobody can recognise him, because of reasons.

The Samaritan feels an immense responsibility to save every life he possibly can. He optimises each day to work efficiently, zipping from crisis to crisis within fractions of a second and not staying much once a problem has been contained.

Howbeit, he’s aware that spending a bit of time to bolster the morale of onlookers is valuable, and does so when feasible. 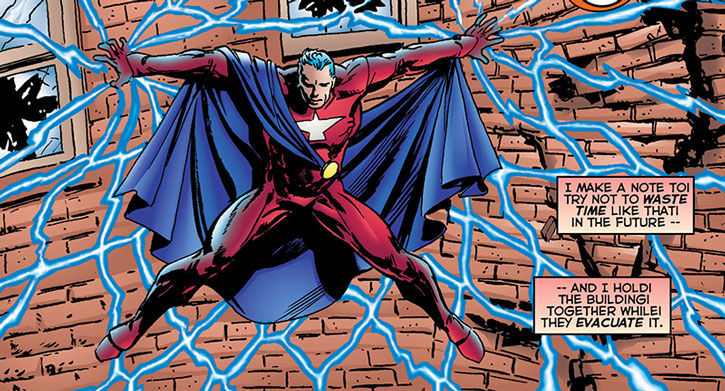 His entire life is thus thoroughly constrained. A few hours of sleep, perhaps an hour or two of actually living and working as Asa Martin, and everything else in the field. Aside from his burning dedication to his super-hero work, that leaves little place for a personality.

Still, he seems to be a self-effacing, polite, generally pleasant, low-key man of an indistinct age and with a love for traditional written journalism. His tastes are very simple, and he has a fondness for the hamburger chain restaurants Beefy Bob’s. He apparently doesn’t drink or smoke.

The lack of romantic and sexual companionship wore the Samaritan down, but his self-sacrificing and workaholic nature prevailed for years.

His colleagues of the Honor Guard eventually played matchmakers and set up a date with the powerful independent heroine Winged Victory (Lauren Freed), with whom the Samaritan had shared a silent mutual attraction for years.

They became a couple, though with their schedules their meetings are infrequent. Winged Victory eventually joined the Honor Guard.

Beyond saving lives, the Samaritan believes in equal rights and freedom for all. He also believes that he has no right to deliberately change the past unless there’s a very clear ethical imperative, like with his original mission.

He’s a total goody two-shoes — like the kindest versions of Captain Marvel (Billy Batson) — but it’s not always apparent since he’s on the clock and needs to act quickly in most situations.

(During his first appearance)
Journalist: “This way, sir ! What’s your name ?!”
Samaritan (embarrassed): “Please… I’m not that important. Just… just call me a good Samaritan.”

“There’s always hope. Everything we do is unrealistic. We’re fighting for dreams, and we can’t give up, not even when… especially when it’s impossible.”

“We can handle the Skullcrushers. They’re tough, but we can wear them down. But it’s hard to maneuver, as long as their heavy defenses are active – and those are controlled from inside the mountain. Assemblyman — we need a way to disrupt them. See if you can get through their shields. Take Wolfspider and Quarrel with you.”

As a time traveller suffused with space-time energy, the Samaritan will remain untouched when the past is altered – even if the alterations in the past make his existence paradoxical. The whole world will be retconned to a new state, but the Samaritan will be mostly unchanged and keep his full memories of the previous continuities.

Like with all Astro City entries the stats are tentative – the mix of mythology and human interest stories in the books doesn’t provide the sort of information necessary to benchmark the characters. So all stats are educated guesses.

OTOH, the writeups.org crew has statted up thousands of characters and Busiek’s point is to use archetypes, so the education of our guesses is pretty good.

By Byron Molix and Sébastien Andrivet. 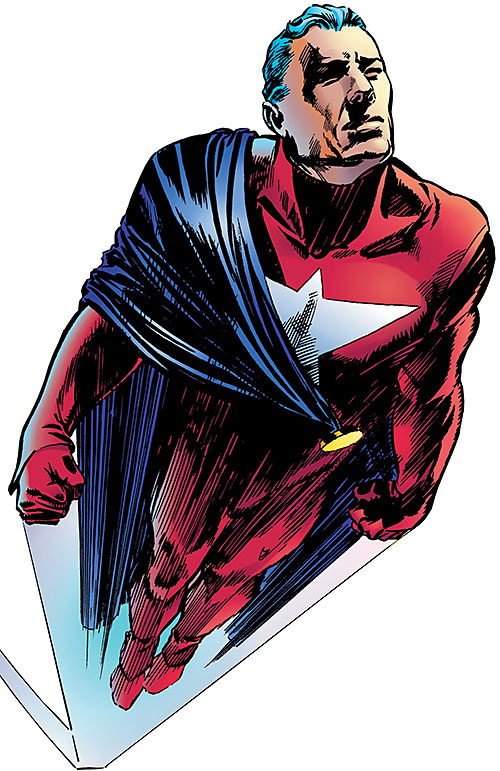 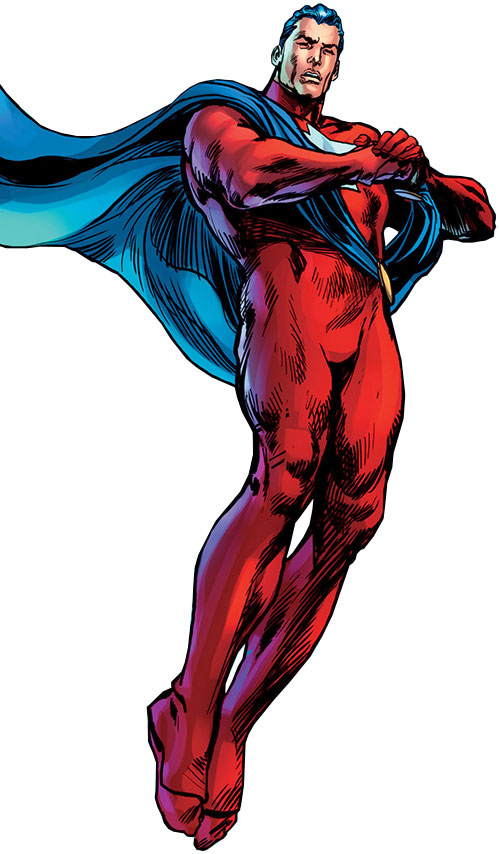 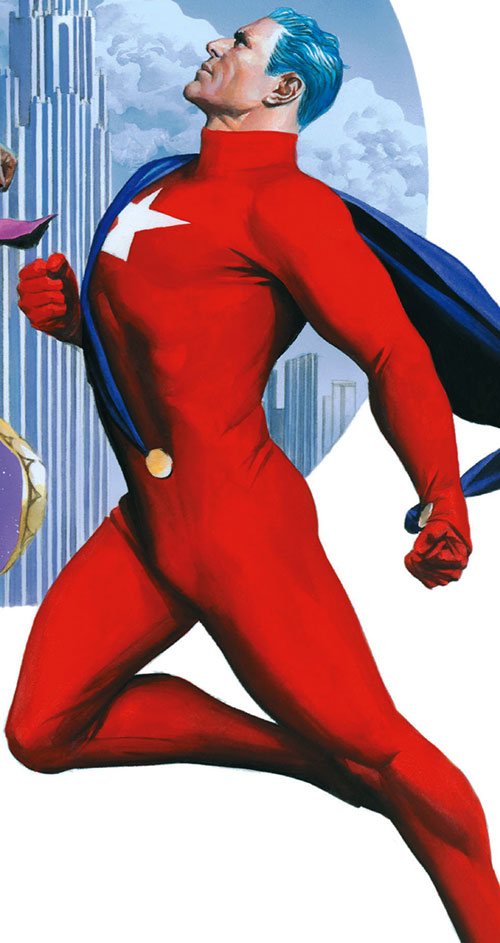 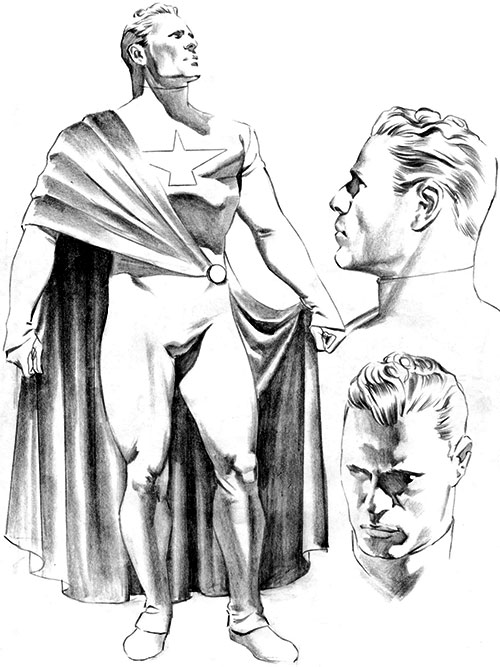 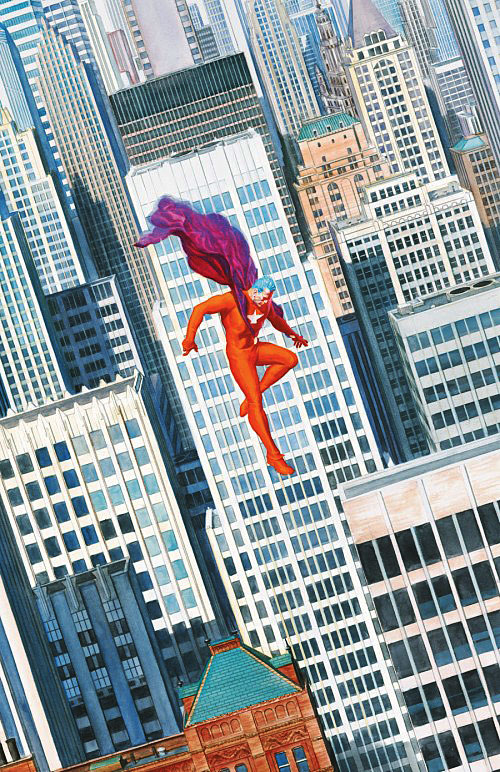