In its second season, the name of the program was changed from Samson and Goliath to Young Samson. Although Samson’s super- powered form was occasionally referred to as “Mighty Samson”, neither of the character’s two forms was ever called “Young Samson” during any TV adventure.

By striking together his Power Band wristlets, the teenage boy known only as Samson can transform himself into the adult hero who bears the same name.

In this super-powered form, Samson is an immensely powerful individual capable of astonishing feats of strength. His tough body can withstand tremendous punishment while his mighty leg muscles can propel him across great distances seemingly ignoring the laws of physics.

In fact, once airborne in this manner, Samson may halt his forward movement and hover in place to land a powerful punch on a giant-size opponent and then continue on along the leap’s trajectory. He can even turn in mid leap in a manner that seems more like Flight than Jumping.

Samson is also an intelligent hero able to size up a situation in an instant. He can rewire enemy machinery to his own end and even succeeded in piloting a captured space vessel back to Earth.

In order to transform into his super-powered form, Samson must strike his Power Band wristlets together. This is similar to Rick Jones turning into Captain Mar-Vell. Usually, Samson does this over his head with an accompanying shout of “Time for Samson power!” 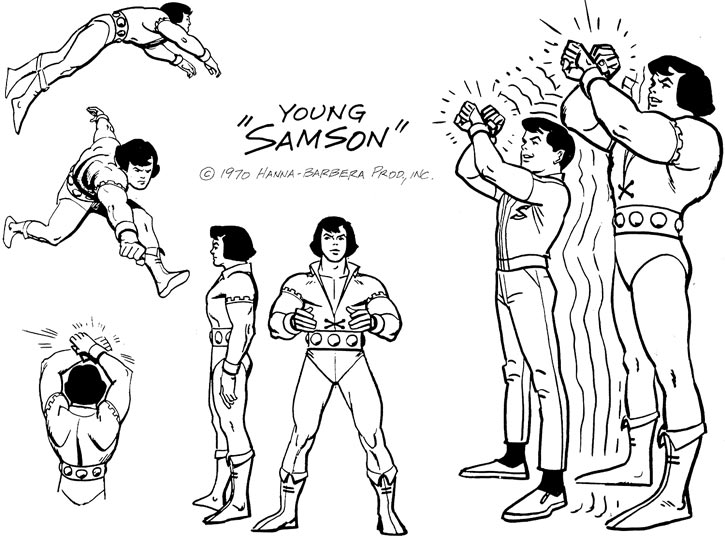 Additionally, he must strike his Bands together while directing his outstretched arms toward Goliath to transform his lovable pet dog into the huge super lion with whom he adventures. A swirl of lights and a loud explosion heralds either one of these transformations.

Samson and Goliath are never seen transforming back into their non- powered forms. It is unknown whether they can do so without aid of the Power Bands.

Furthermore, the Power Bands have never been removed from the super-powered Samson’s wrists. Some GMs may decide that lack of the Power Bands strands Samson in his adult form while others may choose to have Samson immediately revert to his teenaged form.

In addition, the wondrous Power Bands not only serve to allow his transformation into this mighty form but supply him with other incredible powers. To access these, Samson manipulates the bands by giving them a half turn twist on his wrist. This is often accompanied by some remark about “Super Samson power”. Applications include:

The non-powered Samson is no less exceptional for his lack of super abilities. A bright and upbeat young man, Samson is an excellent driver and pilot and shares his alter ego’s knack for evaluating situations quickly and accurately. 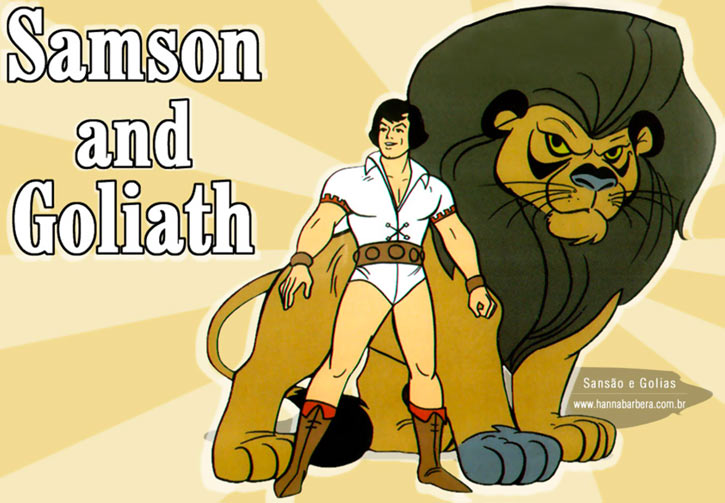 He seems to know a heck of a lot of people. Many of them are noted scientists.

Samson only rarely suffers any drawback associated with his young age.

The cartoon’s vintage intro, right in the act of being vintage.

Nothing has been revealed about the origin of the wandering super-hero known as Samson. He never mentions any family. He seems to be completely self-sufficient despite being hardly more than 15 in his non-powered form.

He and Goliath simply drive or fly from one adventure to another.

The world of Samson and Goliath follows Hanna-Barbera Super Adventures logic. Thus, gravity is only an occasional nuisance, teenaged boys (and their lovable pups) can travel the world on their own with no visible means of financial support, and any evil scientist worthy of the title owns a big, ugly monster whose name invariably ends in “O” or “Saurus.”

The strange logic of this place doesn’t end there.

Several of Samson’s adventures occur when he is visiting one of his many professor friends, yet we never see Samson actually attending school. His identity is publicly known but only two villains use this info to any advantage. His powers seem to rely on his Power Bands but, again, only two villains seek to deprive him the use of these mighty artifacts.

While Samson has never met any of the other Hanna-Barbera super- heroes (such as Space Ghost or Birdman). Yet it might be fun to put them all in their own dimension, say Earth HB. 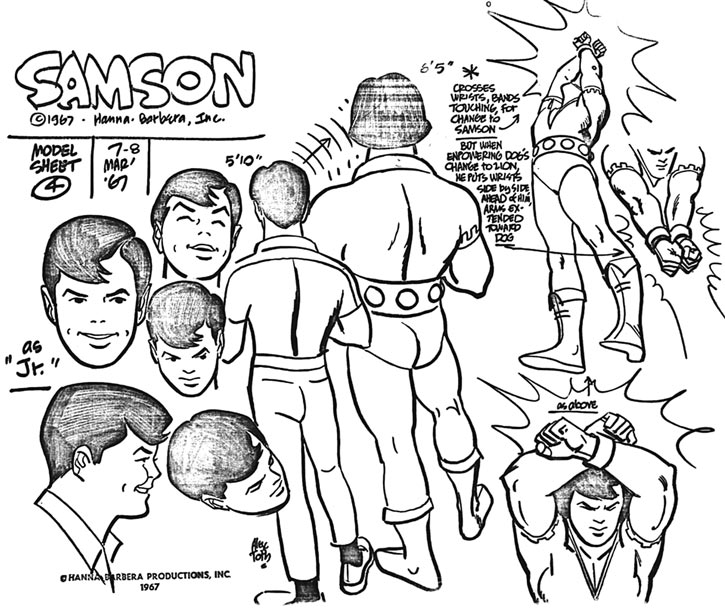 In DC Heroes RPG terms, Earth HB would have its own Genre rules regarding:

In his super-powered form, Samson is an attractive, broad-shouldered man in his early 20s. He wears a white, short-sleeved shirt (with tan trim at the sleeves), white trunks, a brown (leather?) studded belt and brown, calf-high boots with tan cuffs. His Power Band wristlets, though medium brown in color, are identified as gold in one episode. They are hinged for removal.

Samson was designed by the great Alex Toth . This profile mostly uses his model sheets as illustrations.

In his non-powered form, Samson wears a white shirt with a stylized “S” on the left breast along with blue jeans and blue or black tennis shoes. He is a handsome boy who appears to be in his mid teens. He too wears the brown / gold Power Bands.

His scooter is red with black trim. It features a flat rear platform for the dog-sized Goliath to ride on. His airplane is a single prop, white craft with red and black trim. The rear of the plane has been gutted to accommodate Samson’s motor scooter. Both vehicles feature the stylized “S” that appears on his shirt.

Samson is the typical Upholding the Good type hero. He’s strong and brave and willing to do the right thing for no other reason than it is right. He is patriotic, coming to the aid of his government on more than one occasion. Samson is always respectful to his elders regardless of his own “age” at the time.

He enjoys meeting different people and seeing the world. Thus, many of his recorded adventures involve him in some far off locale like Tibet or Egypt. 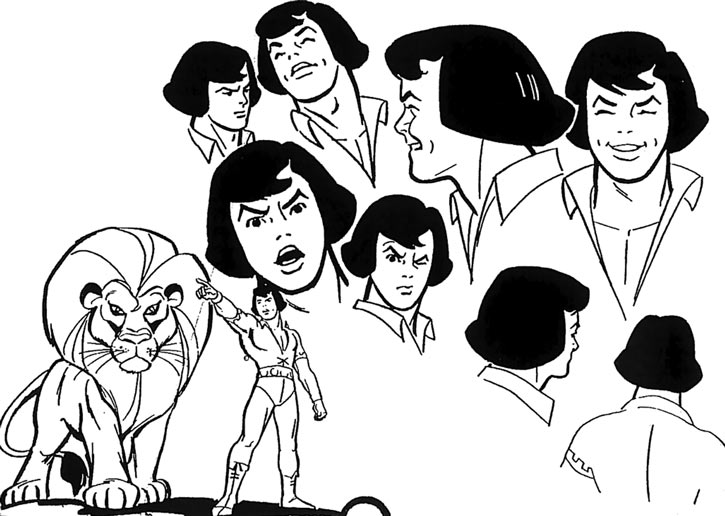 He also seems to relish his super powers and enjoys using his great strength in interesting ways. He has faith in those same abilities and does not often call on the additional Powers granted by his Power Bands frivolously. In fact, more than three-quarters of his adventures do not involve him using ‘Super Samson Power’ at all.

Thus, GMs may wish to give the Powers inherent to the Power Bands the Serious or Catastrophic Marginal Limitation. I see no need if Samson is role- played correctly.

Of course, Samson loves his pet Goliath and is extremely loyal to him.

A young boy who transforms into a super-powered adult version of himself? Does the old wisdom Shazam have a rival in the hero making game? With the alter ego facet of the character and the implied connection to a legendary hero, it is possible that Samson’s untold origin is similar to that of Billy Batson with another wizard filling in for Shazam. 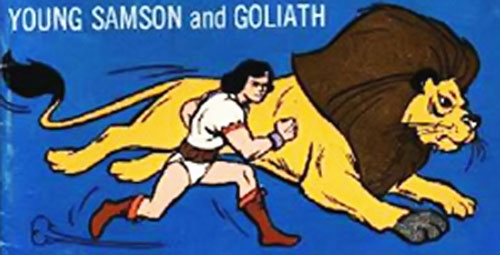 Because of the biblical connotation to his name, perhaps that “wizard” is Izaya, Highfather of New Genesis? And perhaps the Power Bands worn by Samson are a Mother Box. If so, functions have been sorely limited for fear that even in the purest mortal’s hands the power they grant would be too easily corrupting.

Alternately, Samson may be the son of the Israeli hero Seraph. It might be an interesting idea to create a super team of Seraph’s progeny, each one possessing powers associated with one of the prophets who granted their “weaponry” to Seraph himself.

In the Marvel universe, “Samson” would most likely be the teenager’s last name thereby establishing a connection to Dr. Leonard Samson. Perhaps the Power Bands were created by Doc Samson and Bruce Banner in an attempt to control the latter’s rampaging alter ego, the Hulk. They may have proven unfit for that task and been discarded until being found by Doc Samson’s relative, Samson.

Of course, a Marvel Comics presence suggests a link to Marvel’s other major alter ego type, Thor or those ersatz New Gods, the Eternals. In fact, Samson’s super-powered form bears a striking resemblance to the Deviant warrior turned ally of the Eternals, Ransak the Reject.

“Time for SUPER Samson power !” (Or a variation thereof, followed by turning into his super-form.)

“Use your Power Beams, Goliath !”

Bonuses and Limitations:
Samson’s Flight Power represents some of his physics mangling leaps. As such, he must be able to jump from the ground in order to employ Flight. If Samson is caught by Surprise (by a trap door opening up underneath him, a rotting floor giving way under his weight, etc.) he will be unable to use Flight to keep from falling.
Furthermore, Samson may only remain airborne for a number of Phases equal to his APs of Flight at which point he must land or begin to fall. Once he has landed he may immediately ‘leap’ again reactivating Flight for an additional 07 Phases.

Enchantment is 0 APs unless augmented by Power Reserve. Enchantment may not be used to increase any Powers, Attributes, or Skills of the wearer. Enchantment APs must be assigned to a third party (such as Goliath.) (-0) Bonus: Omni Power. Usable on Others (+5).

Power Reserve may augment Omni Power, Enchantment, or wearer’s Str but cannot be split between them. All APs of Power Reserve must be assigned to one Power or Str. (-1)

This Advantage represents the fact that Samson may use the Power Bands to instantly transform back and forth from his non-powered to his super-powered form. Similarly he may employ the Bands to activate Goliath’s Alter Ego (5 Hero Points.)

Samson never uses the Power Bands’ Powers when in his non-powered form. It is unknown whether he is prevented from accessing these Powers when a teen or if he refrains from using them for some other reason.

Goliath has his own entry.

Does Samson possess the Alter Ego Drawback or is all his power in his Power Bands?

After carefully rewatching the entire series I have chosen to treat Samson like Thor. Whereas some powers are definitely possessed by the Bands (Hammer), they are not the source of ALL Samson’s power but instead serve to facilitate the transformation to and from the non-powered Samson (Dr. Donald Blake, Jake Olsson.)

I have based this decision on two episodes of the cartoon.

In one, the evil Dr. Demos traps the teenaged Samson in a stockade-like device which prevents him from striking his Power Bands together to trigger his transformation into his super-powered form. Rather than take the Bands from Samson and attempt the transformation himself, he leaves them on the teen’s wrists (and, of course, Samson escapes.)

In another, the leader of the Hydra-inspired PERIL succeeds in rendering unconscious the teenaged Samson and actually stealing the Power Bands. But does he try to use them? No! My conclusion: they can’t. While Samson may need them to adopt his heroic guise, his super-powered form actually lies within himself not in the Bands.