The Samuroids are large, athletic androids. They have significant combat and infiltration abilities.

The androids are usually clad and equipped as historical samurai – hence their name.

The Samuroids’ neural network is relayed in part by bacteria processing the information. This hybrid system was miles ahead of most everything else during the 1960s. It allows them to learn certain physical skills – mostly combat skills. Thus the Samuroids can be trained and drilled to slowly improve their abilities, much like living soldiers.

Our game statistics assume 1960s models that have trained for months if not years. Since the bacterial bits are organic and somewhat random, it is possible for some Samuroids to turn out to be particularly good or bad pupils.

In DC Heroes RPG terms, the Samuroids are flexible enough to use Team Attack under some circumstances, despite being faceless goons.

Using the improved bacterial strain developed in the 2000s, Samuroids could learn at a tremendous pace. That gave them a superhuman ability to replicate motion – up to replicating the alacrity of people using the Speed Force to move. One of them was even seen engaging the Flash in a superspeed sword duel !

The Samuroids can be given various kinds of traditional samurai equipment, such as jet packs. The lamellar armour they wore in the 1960s was immune to most infantry weapons – including submachineguns and flamethrowers. But rocket launchers, heavy machineguns and mortars might have worked.

The Samuroids are an early masterwork of the reputed builder of androids, Thomas Oscar Morrow. They likely were built in the mid-1960s. That would make them contemporaries of T.O. Morrow’s most famous android, the Red Tornado. Unlike the Red Tornado, they were produced in a large batch – probably 30 or so. 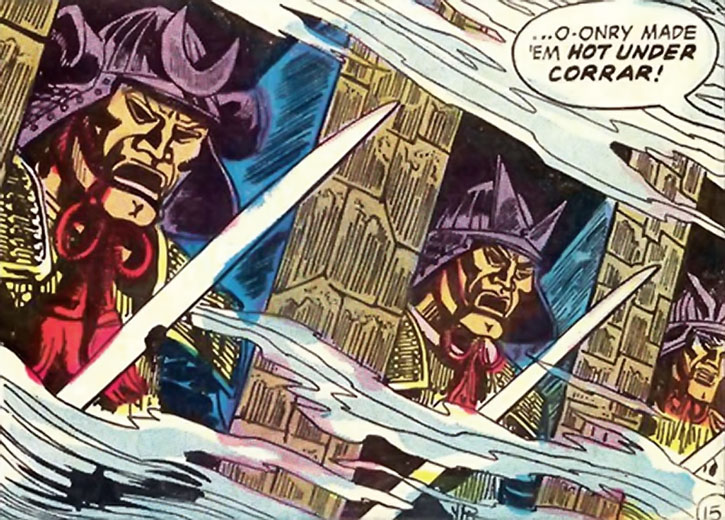 The order for those had been placed by a Japanese criminal called Baron Katana (likely a pseudonym). Katana allegedly was one of the drivers behind Japan’s entry into World War Two. He was a member of the Kayido clan, reputed for its past as a ferocious, warlike house, and its black heron mon .

After the war, Katana had retreated to his ancestral Kayido Clan domain. That meant an isolated and forlorn island off the northern coast of Honshu. The island is tiny, with just a shogunate-style fortress.

By 1968, Lord Katana had a force of about 15 fully-equipped Samuroids. One of them, Daisho, was the taskmaster for the rest. Daisho had even been given a lifelike face and voice.

Baron Katana was apparently the only non-Samuroid on the island. His “troops” kept training with sword, bow and the like for months if not years.

Baron Katana plotted against Japan. His web of agents struck at potential opponents until his invincible Samuroids would be ready for conquest. However, his location was discovered when local fishermen caught the “corpse” of a Samuroid. Daisho had killed it in a training duel for being too slow a learner.

Soon after that Katana sent a strike force of his flying artificial samurai. They were to kill the soldiers in a small outpost in Hokkaido as a test. This was successful.

As the Japanese special forces prepared an undercover strike on the Kayido’s clan island, the Flash reconnoitred the place but was captured. The arrival of the soldiers (disguised as a film crew) forced Katana to stop torturing the Flash, who eventually managed to free himself.

Saved by the soldiers’s arrival, he saved them in return when they tried to destroy the Samuroids with flamethrowers, and failed. 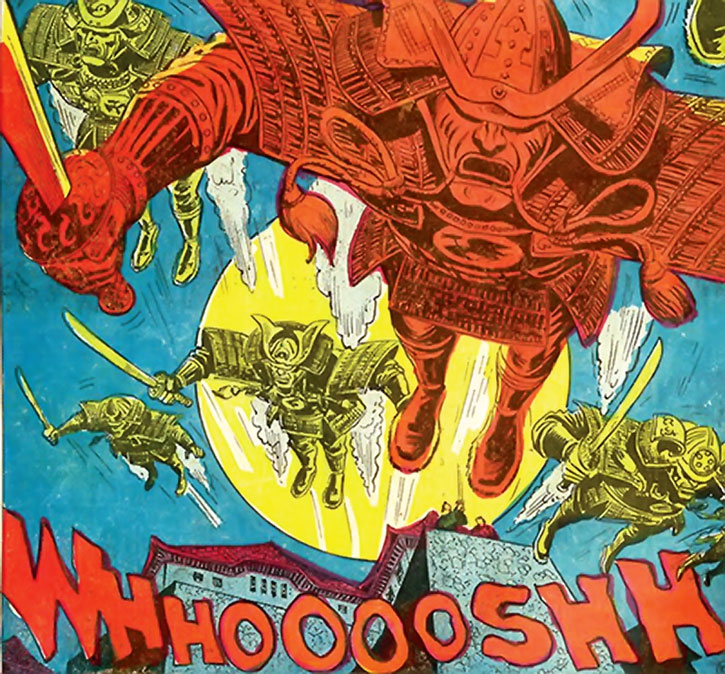 The Flash then incapacitated the Samuroids by frying the hidden control centre remotely coordinating the androids. The fiendish Baron Katana escaped, though he was never seen again AFAIK.

(The story was something. An upbeat, camp comedy as was the style of the day (think Adam West’s Batman) saturated with racism.)

What became of Katana’s batch of Samuroids is unrevealed. The rest were seemingly never activated and T.O. Morrow lost track of them. Apparently they spent most, if not all, of that time inactive and in storage. They ended up in a warehouse that the Riddler owned.

Presumably not knowing what was in the warehouse, the Riddler gave it away to the Penguin to pay a debt. The Penguin found the androids, identified them as T.O. Morrow creations, and got in touch with the robotics genius.

Amused to be reunited with his old creations after decades, T.O. Morrow agreed to make them even more powerful. Research had caught up with Morrow’s 1960s work. For instance, chemist Philip Lerner had come up with “artificial intelligence in chemical form”. His bacterial culture was even more advanced than the one used by the Samuroids.

Lerner refused to give his discovery to the Penguin, who had him killed. Morrow then used the Lerner strain to reactivate the Samuroids. The Penguin deployed these to kill Bruce Wayne. 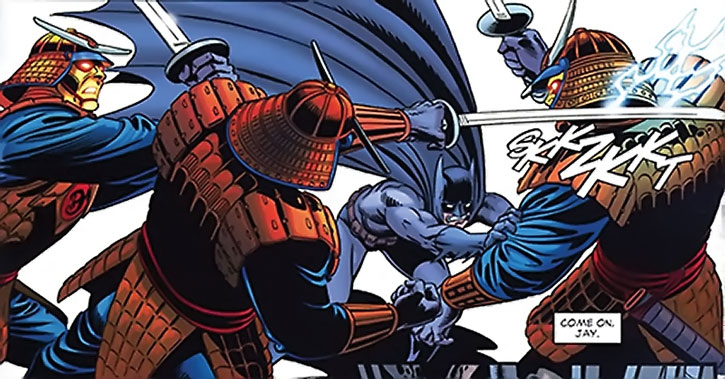 While the robots proved redoubtable opponents, Batman and providential ally the Flash (Jay Garrick), who had come to investigate Lerner’s death, eventually prevailed. However they had to use a powerful antibiotics aerosol to destroy the bacterial culture within the Samuroids, rendering them inert.

The Samuroids do not usually speak. They behave like silent, extremely disciplined commandos with swords.

Equipment: Their full equipment is:

“Daisho” (litt. ”tall-short”, the term for a katana and wakizashi pair) was the lead samuroid of Lord Katana. He trained the others, and was more skilled than they were. His Weaponry skill was a 08 and he had the Paired Weapons (katanas) Schtick. Despite his name he dual-wielded katanas, not an actual daisho.

The improved strain of bacteria used in 2008 allowed the Samuroids to learn at an accelerated pace. They even started to duplicate the Flash’s Superspeed and Batman’s Martial Artist. This can be treated as Adaptation: 12, limited to DEX and DEX-related abilities, with but 0 APs of Range.

The ramp-up for Adaptation takes a bit of time as the Samuroids go through their learning process. After two Phases, they can Adapt the desired ability with as many APs as their DEX. They then can add on additional AP on top of that every five Phases. 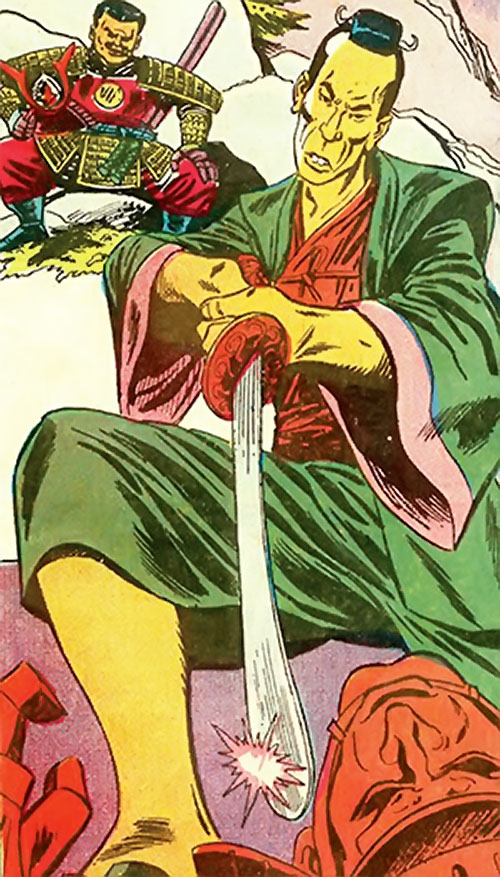 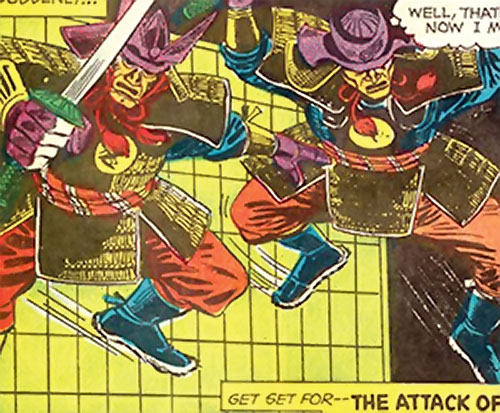 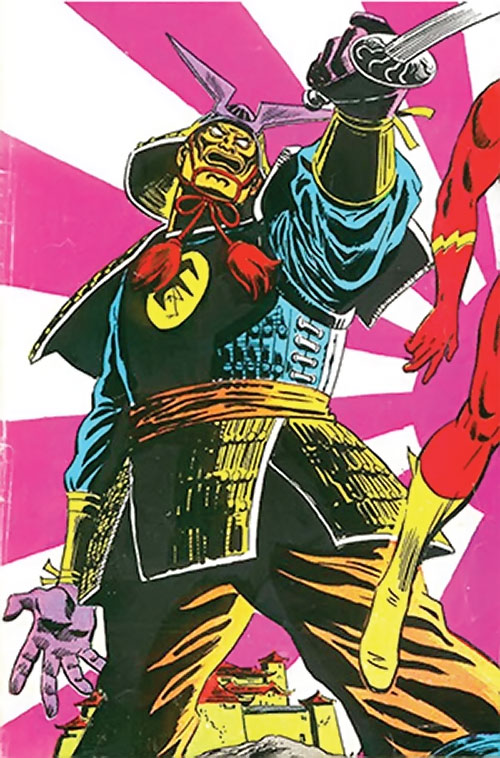