The Sanction battlesuit has a steel-boned, mesh-lyte bodyglove armour with tungsten alloy articulations. It also sports mottle ceramic contact-assault claws – three per gauntlet. Being intended for close combat, the suit is unusually fast and strong. Its feet and hands have a clamping system to move in precarious places.

The Sanction suit’s ranged capacity is a hand-held, powerful crossbow. While this weapon cannot hope to damage most suits of power armour, it can be armed with a powerful EMP  pulse bolt, which proved able to fell War Machine. This bolt is powered by special flash batteries on the Sanction suit, and connected to them by an armoured cable.

“Sanction” is actually the name of a suit of power armour build by Laslo Magzel, the Slorenian immortal mutant and techno-savant also known as Locomotive Breath. This armour was intended for the Rush Club, a small club Magzel founded to pass his ennui. It hosted duels between voluntary members wearing his suits of power armour.

Aaron, one of the three regulars, was wearing the Sanction suit. He seemed to have some sort of military background.

After Magzel created the Quarry armour, Rush Club member Rowntree approached a down-on-his-luck veteran named Owen Segar, whom he knew from the service. Segar agreed to fight as Quarry in exchange for a cash sum, and trained with the Quarry armour for two weeks before he would fight Rowntree, who was wearing the Gunship armour.

Segar had changed his mind, however, and decided that what he wanted wasn’t the cash but the armour. He feigned incompetence, then sucker-punched Gunship and left, flying toward Philadelphia. He wasn’t expecting the clandestine Rush Club to risk exposure, but to his shock Gunship aggressively pursued. War Machine (James Rhodes) intervened and broke the fight.

Sanction and Locomotive Breathe came in to reinforce Gunship, and Quarry seemed to be killed despite War Machine’s best efforts. Rhodes realised that Segar was still alive and brought him to the hospital. After Segar told him what was going on, Rhodes decided to shut down the Rush Club.

When War Machine attacked the Rush Club he easily took out Gunship, but Sanction felled him in turn using a powerful EMP crossbow bolt.

Sanction was reportedly handed over to the Baltimore police when the Rush Club was later closed.

A dour man of few words, all of which are negative. Once in combat, however, he fights like a maniac.

At close range he’s a vicious berserker (he was aiming for War Machine’s eyeslits), at long range a cold-blooded sniper.

Nothing ever happens in DCU’s Eastern Europe, so you might relocate the Rush Club there.

The wealth level and military skills are guesses – very little is known about him. 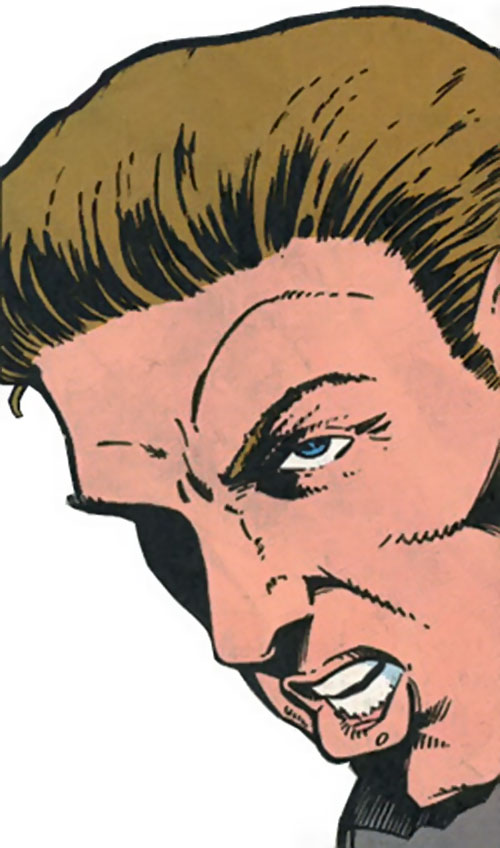