The Sand Superman received all of Superman’s own powers during the long-time exposition to each other they had. These included:

Its mental link with Superman allowed it to drain the Kryptonian’s physical attributes and all powers. That went on until an equilibrium was reached, making them both equally powerful. The Sand Superman could control the drain rate up to a range of around 1 mile. However, the power would be uncontrollable in the immediate vicinity of Superman.

Touching Superman would theoretically have led to a “cataclysmic explosion” that could have destroyed them both.

Lastly, it had a strange ability to move around unseen, even by Superman.

Somewhere in the deserts of the USA, there was an experimental reactor in which experiments were conducted upon pieces of Kryptonite. When a powerful nuclear meltdown happened Superman himself was there to attempt to stop it.

He failed, and a powerful kryptonite-based explosion ensued. Superman was knocked unconscious, and the impact of his body in the desert’s sand formed an imprint. Still, he had stopped most of the deadly radiation, saving untold lives.

However, a strange fission wave reached around the world. It changed all Kryptonite into pure iron. Thus, Superman no longer had to fear Kryptonite (though eventually, more of the stuff rained down on Earth).

The explosion also opened a portal into the Quarrm Dimension. In that dimension beings existed as non-corporeal spirits. Most wanted a physical form to exist in.

A Quarrm being used the portal to attach itself to the psychic and physical imprint of Superman left in the sand. Hours after the explosion an uncanny version of Superman, made of sand, rose from the imprint.

Over the following months, this being shadowed Superman, needing to drain energy from the Kryptonian to create more of an identity for itself. Superman was left near powerless after each such encounter. The Sand Superman grew more and more powerful and humanoid, though he wasn’t capable of communicating yet.

During one such encounter, the creature saved Superman’s life by destroying the Devil’s Harp, a magical weapon used by Ferlin Nyxly. Had Nyxly slain Superman, the Quarrm creature would have died of “starvation”.

The Sand Superman eventually drew enough energy to communicate. But it was too alien and did not care for Humanity, and Superman was thus unable to reason with it.

Superman ended up depowered. He called upon Wonder Woman’s friend and mentor, I-Ching. The scholar manipulated Superman’s soul, so the Man of Steel regained his powers and left and Sand Superman powerless and nearly dead. The Sand Superman managed to open a portal to Quarrm in a Metropolis park, but was then too weak to cross over.

Meanwhile, Superman was acting rashly and irresponsibly. He had suffered some brain damage while depowered, and being repowered did not heal that. And there was no Kryptonite left to bring him under control. Left with little alternative, I-Ching made a deal with the Sand Superman to have him drain Superman’s power, so he could be treated.

But the first attempt failed. Superman spotted the Sand Superman and escaped.

Spirits in a material world

Meanwhile, another being from Quarrm had entered the Earth Dimension via the portal in the park. This being fused itself with a giant Chinese statue of a monster then rampaged in the streets. Superman accidentally flew over this creature and was left drained unconscious and powerless.

Street punks found Superman, gave him a real beating and allied themselves with the new Quarrmian. The monster, seeking guidance, did everything the punks asked of it. They wanted to finish off Superman, who was now residing in a hospital, and thus went there sitting on the back of the monster.

But the thugs pushed the Quarrmian too far, and it crushed them both. Superman then woke up, repowered. The monster attacked him, as it also had some mental link with the Kryptonian. The Sand Superman then came in, allying with Superman. Together, they chased the monster back to the portal, where it fled back to Quarrm.

Alone again with Superman, the Sand Superman announced that he was going to kill Superman so that he could be the only Man of Steel.

I-Ching came in just in time. He hypnotised them both into believing they were fighting, demonstrating how a clash between them would destroy the Earth. Experiencing this shocked both Superman and the Sand Superman.

The Sand Superman concluded that it had no right to claim Superman’s soul or body. It thus agreed on returning home to Quarrm. It left through the portal with half of Superman’s powers, as Superman refused to take them back after having seen the destruction of the Earth during the hypnotism. It then closed the gateway from the Quarrm side.

Long after that he was seen in an issue of DC Collector’s Edition Superman vs Shazam. The Sand Superman was impersonating the real Man of Steel and attacked Captain Marvel, while Black Adam pretended to be Marvel and ambushed Superman. All to bring about a battle between the two heroes.

Presumably the Sand Superman returned to the Quarrm Dimension after the matter was settled. He has probably not been seen since…

Everywhere Superman had colors in his suit, it had too>. It even had blue eyes of blue sand and black sand for hair. The entire appearance was uncanny and people who saw it often commented how strange “Superman” looked.

The Sand Superman’s personality is alien. Its driving force seemed to be survival, for which it would do anything.

But over time, it gained some of Superman’s own personality including the desire to help humans and be a hero. It now desired uniqueness nearly as much as survival itself, and would in the end kill Superman (something Superman wouldn’t do) to take his place.

In speech it was sometimes very aggressive, intimidating. Yet at other times it could be filled with self-pitying (particularly if powerless). It was stoic and never showed any human emotion. Its logic was non-human, and sometimes incomprehensible.

It really was a troublesome enemy. The Sand Superman had all of Superman’s mental advantages (except his humanity), but none of his limitations. While claiming that it wanted to take Superman’s place it didn’t really care about what happened to Humans or the Earth.

Only the final realization of what was right and what was wrong led it to leave Earth and its claims to be Superman. Since it hasn’t gotten back from Quarrm it has also shown a great belief in its judgement and a great persistence.

The Sand Superman would be a very interesting experiment for a post-Zero Hour DC Universe. Since its’ being completely circulates around Superman only it could be inserted in an identical manner as in the original pre-Crisis story. Except for the kryptonite part, of course.

OTOH, imagine the JLA having a meeting and having the Sand Superman turning up instead of Superman! For example, S.T.A.R. Labs could attempt to create an antidote versus Kryptonite so that the original accident could happen in that desert.

Of course, in the current DC continuity the Sand Superman would be a natural for a “Reign of the Supermen” story .

Notes:
Notice the lacking of Solar Sustenance and vulnerability against lacking of yellow sun radiation (his energies are derived from Superman himself). Supposedly all types of Kryptonite could still affect it, as well as magic (which was shown near the end).

This write-up is based on the current Superman having slightly different AP-levels than what’s described in the published Mayfair Games products. For example, Superman is assumed to have a DEX of 10 APs and a higher Superspeed (see the FAQ). The write-up represents the Sand Superman just before he permanently left Earth for his home dimension.

When it first arrived in the Earth Dimension all stats and powers could be considered to be at 2 APs, after which they, after much drainage from Superman, reached their ultimate levels below. 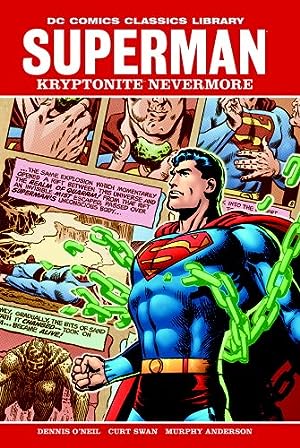 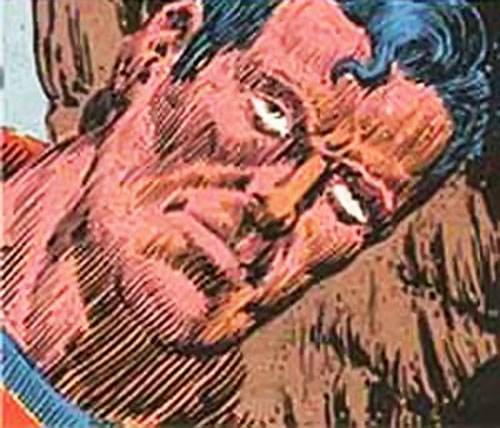