The Sandman is an accomplished martial artist, having studied extensively in the middle east. He is also well versed in Eastern philosophies and perhaps some holistic healing techniques. He is a brilliant scholar in several fields of science, most notably chemistry, as well as an accomplished detective and inventor.

Chief among his inventions is the Gas Gun, a sophisticated spray-device for the delivery of a narcotic compound of his own devising. This gas will cause all but the hardiest constitutions to fall into a deep sleep. While in this trance-like state, the target is highly susceptible to hypnotic suggestion and will generally give truthful answers to all questions.

The Sandman has a variety of pistol- and rifle-type gas guns which may differ in range and capacity. The stats given here represent his “standard” pistol-type gas gun.

Additionally, although he is unaware of the reasons for it, Wesley shares a strange spiritual link with Dream of the Endless. This connection manifests itself as horrible, cryptic, prophetic nightmares which drive him to fight crime.

Wesley Dodds was born in 1913 to wealthy investor Edward Dodds and his wife, Marina. In 1917, when he was still a child, his mother died under unrevealed circumstances. Little is known of Dodds’s early life, save that he spent part of his youth in the Far East and learned Oriental herbalism, martial arts, and origami.

It is known that he is well-traveled, ranging from Europe to the South Seas. After college and his father’s death, Dodds became the manager of a vast estate and an investor in his own right.

Sometime before 1938, Dodds became plagued by extremely vivid dreams of criminal activities, dreams that would not allow him rest. Dodds used his fortune to finance a lab and developed a formula for a sedative and hypnotic gasses.

The Sandman stalks the night

He then bought several kinds of gas masks and by 1938 had set up an identity for himself, the Sandman, in which to pursue the criminals that haunted his dreams. Each time he defeated one of these threats, he left the defeated criminal with a poem enclosed in a bit of origami. A common one read:

There is no land beyond the law
Where tyrants rule with unshakable power !
’Tis but a dream from which the evil wake
To face their fate, their terrifying hour !

Later that year, Dodds met socialite Dian Belmont, daughter of District Attorney Larry Belmont, at local ball. The two became lovers and, by year’s end, Dodds had shared the knowledge of his dual life with her.

In late 1940, the Sandman was selected by Doctor Fate to join the struggle against the Nazis alongside several other American mystery-men, forming the Justice Society of America.

In mid-1941, the JSA prevented Ian Karkull from murdering future American presidents. During this case the assembled heroes were exposed to chronal energy that caused them to age much more slowly than normal humans.

In late 1941, during a time when Dodds was away on business, Dian Belmont disguised herself as the Sandman and pursued some local Nazi agents in New York City. As she raced toward them in her car, shots were fired and forced her to crash. Belmont was seriously injured minutes before the Sandman himself arrived on the scene.

Belmont was reported dead, but it was later revealed that she had survived. Nevertheless, the Sandman took over the guardianship of Dian’s nephew, Sandy Hawkins, who became his costumed sidekick as Sandy the Golden Boy.

By mid-1945, Dodds was beginning to show signs of familial heart disease. His first attack had precipitated his scaled-back activities and resignation from the JSA active duty roster.

In 1950, the Sandman was attempting to make a weapon using silicon. The weapon exploded during the experiment, and Sandy was transformed into a silicoid monster. Terrified at Sandy’s delirium, the Sandman sedated him. Unable to treat him and fearing that the public would demand his destruction, the Sandman kept Sandy sedated in a hidden chamber.

Shortly after this, Dodds retired with the rest of JSA after refusing to testify before Congress during the HUAC  hearings.

In the 1960s, the Sandman emerged from retirement, wearing the original gas mask and trench coat garb of his early days to prevent himself from being reminded of Sandy’s fate.

In the mid-1970s, Sandy escaped his chamber. Sandy’s silicoid body was now sensitive to seismic variation in the earth. Thus, an impending earthquake had driven him on a rampage because of the intense pain the seismic variations generated in him.

The JLA and JSA subdued Sandy, and he revealed that he was not only lucid, but also conscious for all the years that the Sandman had kept him imprisoned. Sandy was sent to a series of labs to find a treatment for his condition.

Some time later, the Sandman discovered that a disgruntled scientist called the Shatterer had kidnapped Sandy from the facility where he had been under observation. The Shatterer was using the seismic “focusing” properties of Sandy’s silicoid body to generate enormous seismic currents and wreak vengeance on his former colleagues.

Using a carbon-based ray similar to the silicon-based ray that originally transformed him, the Sandman reverted Sandy to his carbon based form.

The Shatterer was enraged at the loss of this resource, but a final seismic tremor apparently killed the Shatterer. Because his silicoid body had been immune to aging, Sandy was the same age he had been when he was originally transformed. Together, Sandy and the Sandman resumed a life of at least semi-active crime-fighting.

This old heart of mine

The Sandman has a medical history of cardiovascular disease. As a result, he suffered a stroke in the early 1980s. Although this stroke forced the Sandman to restrict his activities, he participated to a limited degree in the Crisis on Infinite Earths, and joined the rest of the JSA in Limbo as they fought to forestall Ragnarok.

When the JSA returned from Limbo, Dodds had another stroke. The Sandman recovered in time to stop the murder of a visiting dignitary in the same hospital. He later returned to a quiet life, where it was revealed that the dreams of his early career had ceased to plague him.

The Sandman joined the JSA in its assault on Extant during Zero Hour. Along with the rest of the JSA, he was aged to extreme senescence.

Although in advanced old age, Wesley Dodds still ventures occasionally into the spotlight. Most recently he has joined the son of Ted Knight (Starman) in resolving the murder of a New York socialite, John Blaine.

The adventure reawakened in Dodds the desire to have more than a quiet retired life. He and Dian liquidated their assets and resolved to the spend their last days traveling the world one last time.

Dian Belmont died shortly after their arrival in the Orient, presumably from cancer or some other chronic disease affecting the elderly. Shortly thereafter, Wesley Dodds became aware of a growing mystic threat, a being known as the Dark Lord who would attempt to prevent the arrival of Dr. Fate in the land of the living.

Working hastily, he contacted old acquaintance Speed Saunders and arranged for the protection of the 3 infants selected as potential hosts. When Dodds was finally confronted with the Dark Lord in Tibet, he took his own life, casting himself off of Mt. Kailash in Tibet, rather than allow the mage to pry the information on the infants from his mind.

He was laid to rest alongside Dian at the mystery-man cemetery known as Valhalla.

In the wake of Wesley Dodds’ death, Sandy Hawkins took on the mantle of the Sandman.

Wesley Dodds is a mousy-looking Caucasian male, of average height and build. His Sandman costume is an ordinary three piece suit with a trench coat, fedora, and a gas mask. He initially tended toward gas masks with a single filter in front, in unknowing emulation of the mask of Dream of the Endless.

When he joined the JSA, his dreams had subsided, and he wore a mask of his own design. Near the end of his life, when the dreams began to return, he adopted the more traditional single frontal filter mask again.

In day to day life, Wesley Dodds is a pensive, spiritual man, with strong ideas about right and wrong and great disdain for the less savory elements of human society. He tends to carry himself with an air of bored insouciance, as befits his station as a wealthy heir.

In truth, Wesley is a man of powerful drives and beliefs. He is tortured by unpleasant memories of his late father Edward’s horrific scarring during a gas attack in “the Great War,” and by the inexplicable dreams which fill his nights. Only by seeking justice as The Sandman can he hope to banish these nightmares.

As the Sandman, Wesley becomes an aloof, cryptic figure, speaking poetically through the hollows of his gas mask. He is given to referring to himself in the third person, and is no doubt aware of the shock value the outlandish appearance of the mask affords him.

As his relationship with the headstrong, resourceful Dian Belmont has intensified, Wes has found himself a competent partner who refuses to be ignored—a Margo Lane to his Lamont Cranston.

Bonuses and Limitations:
The Sandman’s Precognition power is Uncontrollable, manifesting itself as a series of cryptic nightmares ; Precognition cannot be used voluntarily. The prophetic dreams begin when a new menace appears, and stop only when that menace is dealt with. It is essentially a plot device.

Note:
The Sandman initially lacked all but the High Society Connection. The JSA Connection eventually extended to most of the heirs of the original JSA.

Drawbacks:
CIA (Solve crimes presented in his dreams), Mistrust, MPR (Cardiovascular weakness — Dodds scaled back his activities during the 50s and suffered two strokes during his later years), Secret Identity.

The Sandman through the years

Precognition (and the CIA attached to it) faded away during the war years, but returned during Wesley Dodds’ later years. He still had his prophetic dreams as of the time of his death.

Dian Belmont later changed from a Confidant to Married.

Mistrust was removed when the Sandman joined the JSA, but received again during the Red Scare when the JSA refused to testify before Congress. As the fear of Communism subsided, so did the Mistrust. Dodds suffered from Guilt while his sidekick Sandy was a silicoid monster. After Extant’s attack during Zero Hour Dodds had the Age (Old) Drawback.

Acrobatics was only at 5 APs at the start of the Sandman’s career. By the end of his career, Wesley Dodds’ experiences had given him Occultist (Occult Knowledge) at 04 APs. 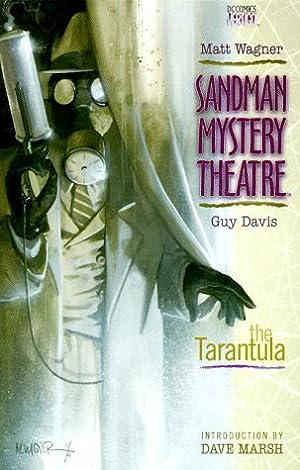 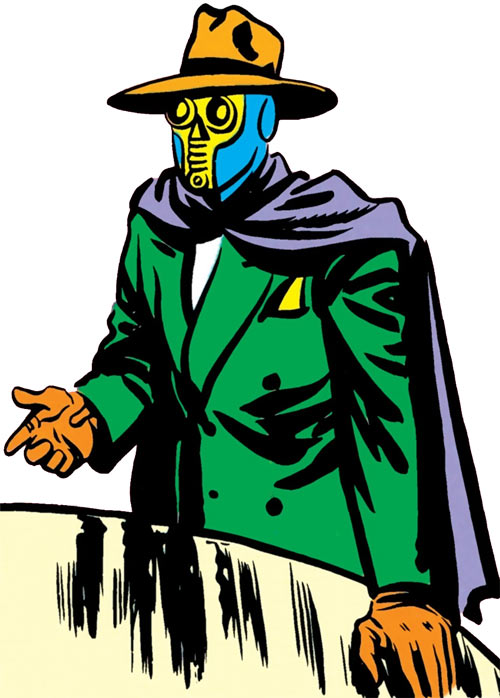