Given enough beer and cigarettes to fuel him, very little can stop the Sandman. If he were, in a DC Universe sense of the word, “an elemental,” he would be the Bowling-and-Budweiser Elemental. OK… maybe not.

Sandman also is extremely proficient with melee weapons. He prefers a “Singapore cane” – the implement used for whipping criminals in that country.

Out of the bars and bingo parlors of Philadelphia, comes the Sandman. Little is known about his past, although he does have an ex-wife, who he lovingly refers to as “Peaches” when he isn’t calling her “Bitch.”

Peaches left him for his original business partner in the bar he owns, Tommy Cairo, and helped Cairo in embezzling funds from Fullington. Sandman beat the hell out of both of them and sent them on their way. After she left him, he went so far as to offer her “services” to patrons at his bar and to his employees as a further insult.

Sometime later, he ran afoul of Raven. Raven kidnapped Sandman’s son Tyler and brainwashed him into turning on his father. When Tyler looked at his father and said “You’re a drunk, daddy. I worship Raven now”, Sandman sided with Tommy Dreamer in his war on Raven and his flunkies.

Sandman’s participation in the war ended with the hospitalization of most of “The Flock” and a severe injury to the Sandman’s eye where Raven had put Sandman’s own cigarette.

When Raven began abusing Peaches, Tyler snapped out from under Raven’s control and ran to his father for help. The Sandman, with Tyler on his shoulders, thrashed Raven to within an inch of his life. This, along with his own girlfriend Beulah’s betrayal of him, led to Raven’s abandonment of Philadelphia for several years.

Sandman is tall, with bleached blond hair, a pierced eyebrow, and a tattoo of himself on the back of his right arm. He is wiry and muscular, but has a little bit of a beer gut.

Relaxed, Sandman is an unmotivated, beer drinking, chain smoking, TV watching, misogynist. In a fight, Sandman is violence personified, but is still drinking beer, chain smoking, paying attention to whatever is on the TV, and calling any women in his presence “Bitch” as if it was their given name.

He also seems to enjoy exposing himself and urinating on things. The only person for whom he has any positive human emotion is his son, Tyler.

“Life’s a bitch, then you marry one.”

Bonuses and Limitations:
Invulnerability only works if Sandman is given a beer or cigarette while unconscious. 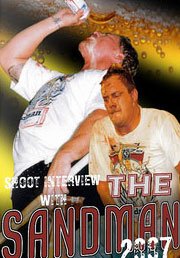 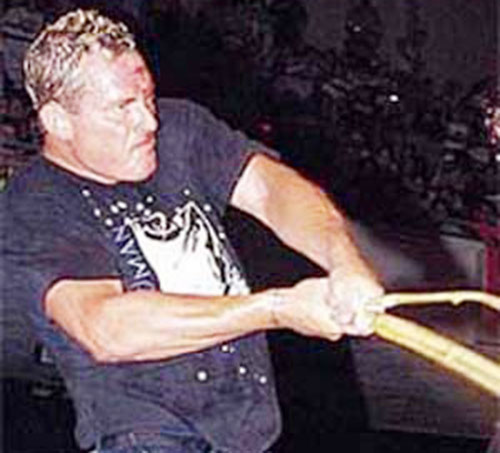